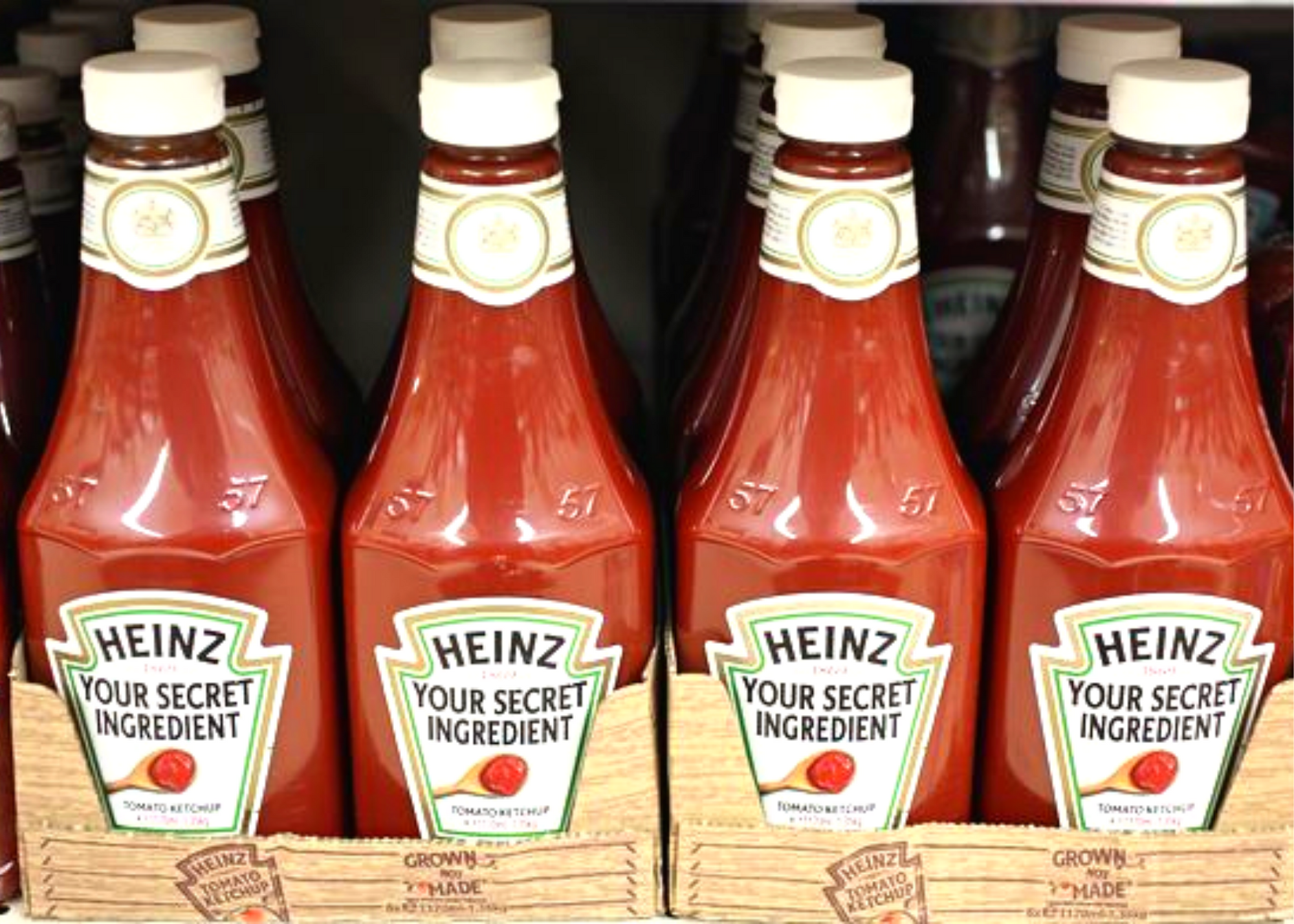 When comparing ketchups, Heinz Ketchup is clearly a winner globally due to its perfect balance of tomato flavor, acidity, and sweetness. That is why the royals chose this product and granted a royal warrant to Queen Elizabeth II.

The top of the bottle, if you do have one in your cupboard, will have a picture of the royal coat of arms. These can be found on Heinz bottles sold in the UK. But this brand needed a document called a "Royal Warrant" to use this symbol again.

A company may use the royal coat of arms in its marketing and on its products with a Royal Warrant document. This operates in return for providing the royals with goods and services.

Heinz was required to modify the design because, according to the Royal Warrant Holders Association (RWHA), warrants become null and void after the death of the Queen. The RWHA said, "Among other things, applicants are also required to show that they have a good policy and action plan for the environment and sustainability."

Other than Heinz, only two other companies will have to do away with the coveted coat of arms of the Queen from their goods: Twinings tea and Bollinger champagne. But the need for a design change won't just affect food and drink companies.

Around 620 businesses have 24 months to make sure the coat of arms is taken off their products. Brands such as Bentley, Jaguar, Land Rover, Barbour, Burberry, Boots, Clarins, Molton Brown, Hunter, and Mappin & Webb are among them.

The RWHA has confirmed that these companies can reapply for King Charles' warrant, but they must show that they have been providing goods or services to the Royal households for at least five of the last seven years.

Several changes have been made to how products are sold and advertised since the Queen died. In the coming months and years, money will have pictures of King Charles III, and pictures of Queen Elizabeth II will be slowly taken off coins and bills. 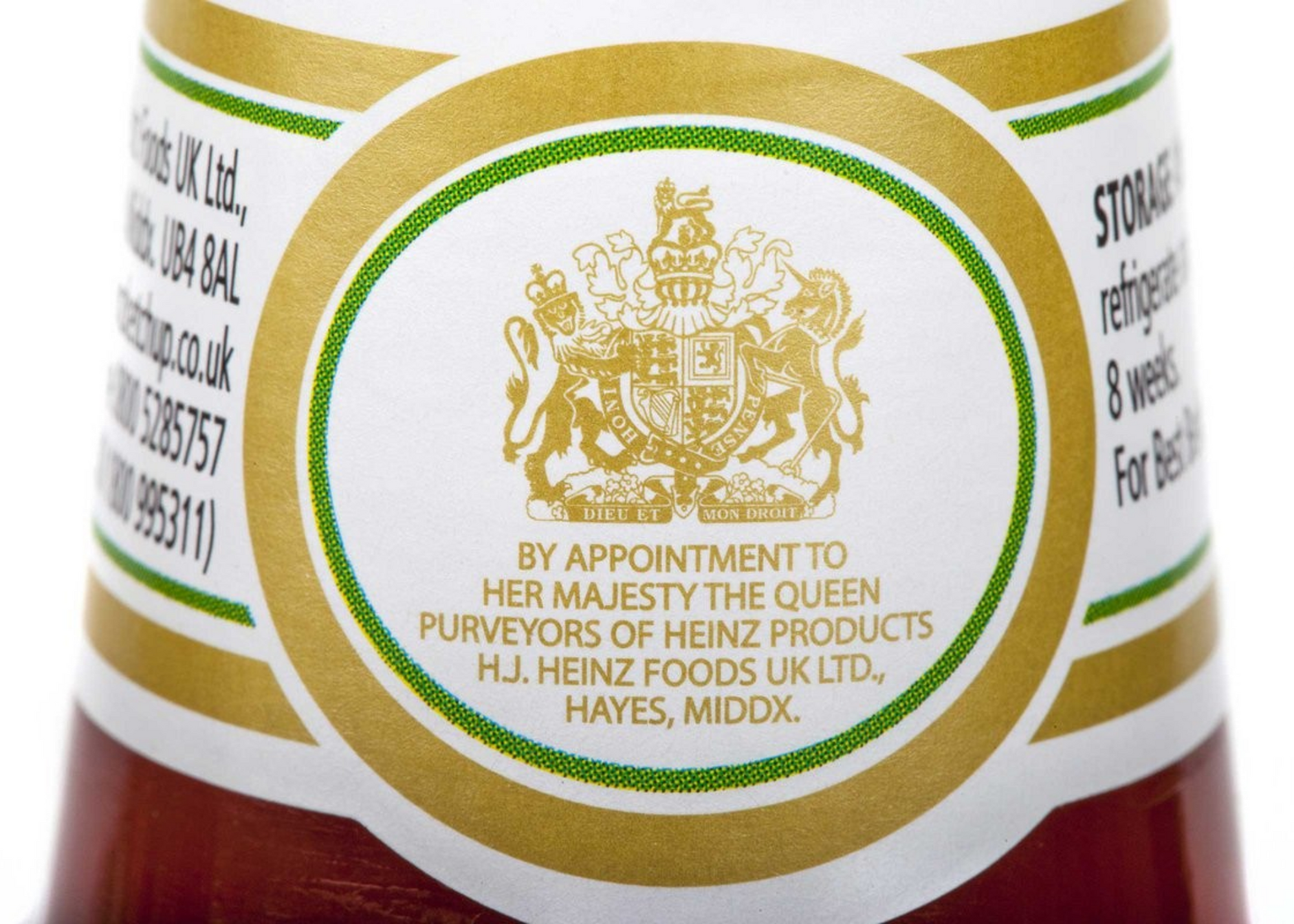 By virtue of its Royal Warrant of Appointment, a company is authorized to use Royal Arms in official business and promotional activities. It is awarded for periods of up to five years as a token of appreciation for providing goods or services to the Royal Family. The Queen or King has the final say on who gets to issue Royal Warrants.

Upon a change of Monarch, the Royal Household reviews Warrant grants, while the company or individual may continue to use the Royal Arms in connection with the business for up to two years. Today there are around 800 holders of Royal Warrants of Appointment united by a commitment to the highest standards of service, quality, excellence and craftsmanship.

In other words, it is an official permission slip that allows a company to put a royal coat of arms on their products and use it in their marketing. The distinctive image of the royal coat of arms, which shows the lion of England, the unicorn of Scotland, and a shield divided into four quarters, is followed by the words "by appointment to Her Majesty the Queen."

In the case of Heinz ketchup, this symbol was on the top and front of the bottles sold in the UK.

As the new monarch, King Charles III, takes the throne, the designs of over 800 brands that were granted a royal warrant by Queen Elizabeth II will need to be updated or they will need to reapply.

Under the new monarch, the designs on the packages of about 875 different brands that have been given a Royal Warrant will have to change or they will have to reapply for the honor.

The use of a royal coat of arms is permissible for any and all brands that have been awarded a Royal Warrant. On the other hand, given that the Queen has passed away, the warrants are no longer valid. But which companies are required to submit fresh applications for royal warrants?

The following is a list of some of the most well-known brands that are required to submit new applications for royal warrants:

The royal coat of arms could be used in designs by companies like Bentley, Jaguar Land Rover, Barbour, Burberry, Boots, Clarins, Molton Brown, Hunter, and Mappin & Webb, in addition to brands.

Now that King Charles is in power, all of these companies have two years to discontinue using any packaging or designs that feature the royal coat of arms and reapply for one.

The video shows an important timeline of how Heinz ketchup bottles have changed over time.

1887 - The company created a new Heinz Ketchup bottle in 1887. This bottle is still manufactured with the signature transparent glass.

On February 11, 1968, Heinz Ketchup Packets were introduced. These portable packets of ketchup started showing up all over the United States. They were made to help sell more ketchup.

1970 - Heinz Ketchup Keg O' Ketchup Bottle. This bottle is nearly identical to the iconic bottle from 1906, except that it is 32 ounces instead of 20 ounces.

1983 - Heinz Ketchup Squeeze Bottle. The plastic squeeze bottle was made so that kids could pour their own ketchup, which led to more people using it and more sales.

1990 - Heinz Ketchup Bottles Go Green. The new ketchup bottles are made from eco-friendly materials. The number "57" remains, but the bottle shape has changed.

2009 - Heinz Gets Rid of Pickles. The packaging for plastic bottles remains, but the pickle is no longer present in 57. This is their new slogan, which features a tomato and the phrase "Grown, Not Made."

2010 - Heinz Ketchup Dip and Squeese Packets were introduced. The Dip and Squeeze packets are intended to be mess-free and multifunctional.

The Food Insider team provides an inside look at the production of Heinz Ketchup. The group traveled to the Netherlands to tour the Heinz European Tomato Ketchup factory and learn more about the making of the iconic condiment. The Dutch factory has been producing ketchup for all of Europe since 1958, and each day it turns out 1.8 million bottles of Tomato Ketchup.

According to the manufacturer, Heinz's main five ingredients are red ripe tomatoes (tomato paste), vinegar, sugar, salt, and a special blend of spices and flavorings. There are no GMO ingredients, no high-fructose corn syrup, and the taste is 100% Heinz.

How Heinz Tomato Ketchup Is Made | The Making Of

My grandmother loves Heinz more than anyone I know. She has Heinz buttons, Heinz ornaments, and lots and lots of Heinz condiments, of course. Heinz kind of saved her life. When my grandfather got very sick and couldn't work anymore, my sweet grandma worked her way up in the ranks at Heinz in mid-late 20th century Pittsburgh until she eventually got a job with the Heinz foundation. She worked to help get funds to projects at schools, community centers and the like. She even helped organize the Heinz foundation ball every year, which was attended by many A-List celebrities. She's a true inspiration to me!

Heinz, which used to be called the H.J. Heinz Company, is now a division and brand of the Kraft Heinz Company. This is a big company that makes processed foods and drinks. It was formed when H.J. Heinz Holding Corporation and Kraft Foods Group merged in 2015.

Heinz has factories on six continents that make thousands of food products. These products are sold in more than 200 countries and territories. Henry John Heinz, who lived from 1844 to 1919 and became known as the "Pickle King," started the Heinz Company in Sharpsburg, Pennsylvania, in 1869.

H.J. Heinz starts selling horseradish, pickles, vinegar, and a number of different sauces. He puts them in clear glass bottles so that people can see how good they are.

Why Heinz Must Remove And Reapply For A Royal Warrant?

Following the death of the Queen, Heinz Ketchup will have to change its iconic sauce bottles and join brands such as Gordon's, Twinings, and Bollinger in reapplying to King Charles III. And, because these bottles became void when the Queen died, Heinz and other brands must now remove them and reapply to King Charles III, demonstrating that the royal household regularly uses their products. Despite the Queen's grant of warrants, they have two years to phase out products bearing the royal coat of arms.

How Does A Product Get A Royal Warrant?

You must have provided goods to the Queen, the Duke of Edinburgh, or the Prince of Wales for at least five years in a row. To be able to use the Royal Coat of Arms, you must have shown over time that you and your service or product are good enough for it to be used in the future.

What happens if the grantor passes away? The Royal Warrant document will no longer be valid, but the company or person can still use the Royal Arms for up to two years as long as there aren't any big changes within the company.

The longtime dominance of Heinz ketchup on British dinner tables may come to an end after the death of Queen Elizabeth II. Heinz ketchup, for example, redesigned their logo after the royal warrant became null and void, as the rule requires.

Companies like Heinz, Twinings, Gordon's, Bollinger, and many more that sell food and drink are required to remove the Royal Warrants from their products and reapply to King Charles III. The passing of Queen Elizabeth II has prompted Heinz to alter the look of its recognizable ketchup bottles.

Producers of ketchup and another 800 food and drink brands have been ordered to remove the Royal Warrants from their packaging. The late monarch's coveted coat of arms has been prominently displayed on the packaging or at the entrances of many iconic products, including Heinz ketchup, Twinings tea, and Bollinger champagne, as well as stores like Fortnum & Mason and Waitrose.