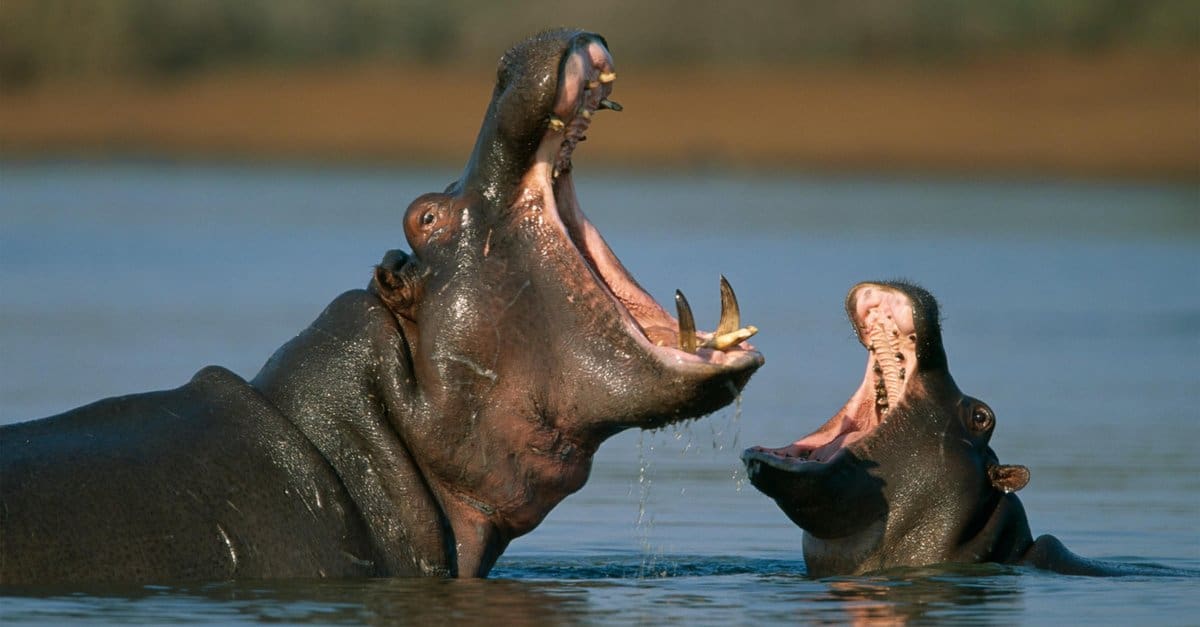 Unbelievable! Hippo nearly swallows a two-year-old Ugandan boy while playing near the lake. A boy from Uganda named Paul Iga had his head grabbed by a hippo. He was almost completely swallowed when he was saved. Witnesses said that the child was playing near Lake Edward when he was attacked by the hippo.

The child was about 800 yards from the lake when the animal tried to swallow him whole. A local threw stones at the hippo until it spewed Paul back out, saving his life from what could have been a much more dire situation.

After surviving the life-threatening event, Paul was rushed to a hospital in Bwera and released after receiving a rabies vaccine. The picture below was taken while he was being observed in the hospital. 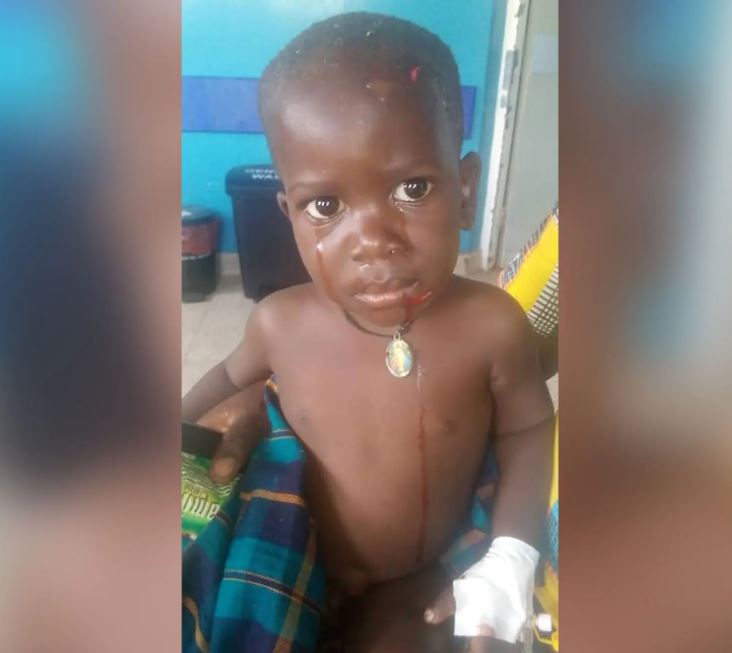 In a statement, Ugandan police talked about what happened and praised a local man for his brave actions, which helped save the boy from the hippo's jaws. They stated:

This is the first such kind of incident where a hippo strayed out of Lake Edward and attacked a young child. It took the bravery of one Chrispas Bagonza, who was nearby, to save the victim after he stoned the hippo and scared it, causing it to release the victim from its mouth.

Hippos are deadly animals that may become extremely dangerous when they feel threatened, despite the fact that they are herbivores and do not feed on the flesh of other living things. Hippos are believed to kill hundreds of people each year and have been known to attack humans who approach too closely.

Things You Should Know About Hippos

Hippopotamuses (Hippopotamus amphibius) are huge, rotund, water-loving African creatures. The term "hippopotamus" is derived from the Greek word for "water horse" or "river horse," despite the fact that hippos and horses are not related. Discover some fascinating information about these magnificent creatures!

Hippos can hold their breath for an average of 5 minutes. That gives you plenty of time to walk along the lake and riverbed floors. It's no surprise that they're known as "river horses"!

Hippos Are Most Active At Night

While hippos are not considered nocturnal, most of their foraging and activity occurs at night. They leave their resting waters at dusk and return in the morning.

Hippos Make Their Own Sunblock

Hippos live in sub-Saharan Africa, where the sun's UV rays are quite powerful. Hippos have evolved the ability to create a red, oily substance that works as a natural sunscreen.

What To Do When Hippo Attacks You 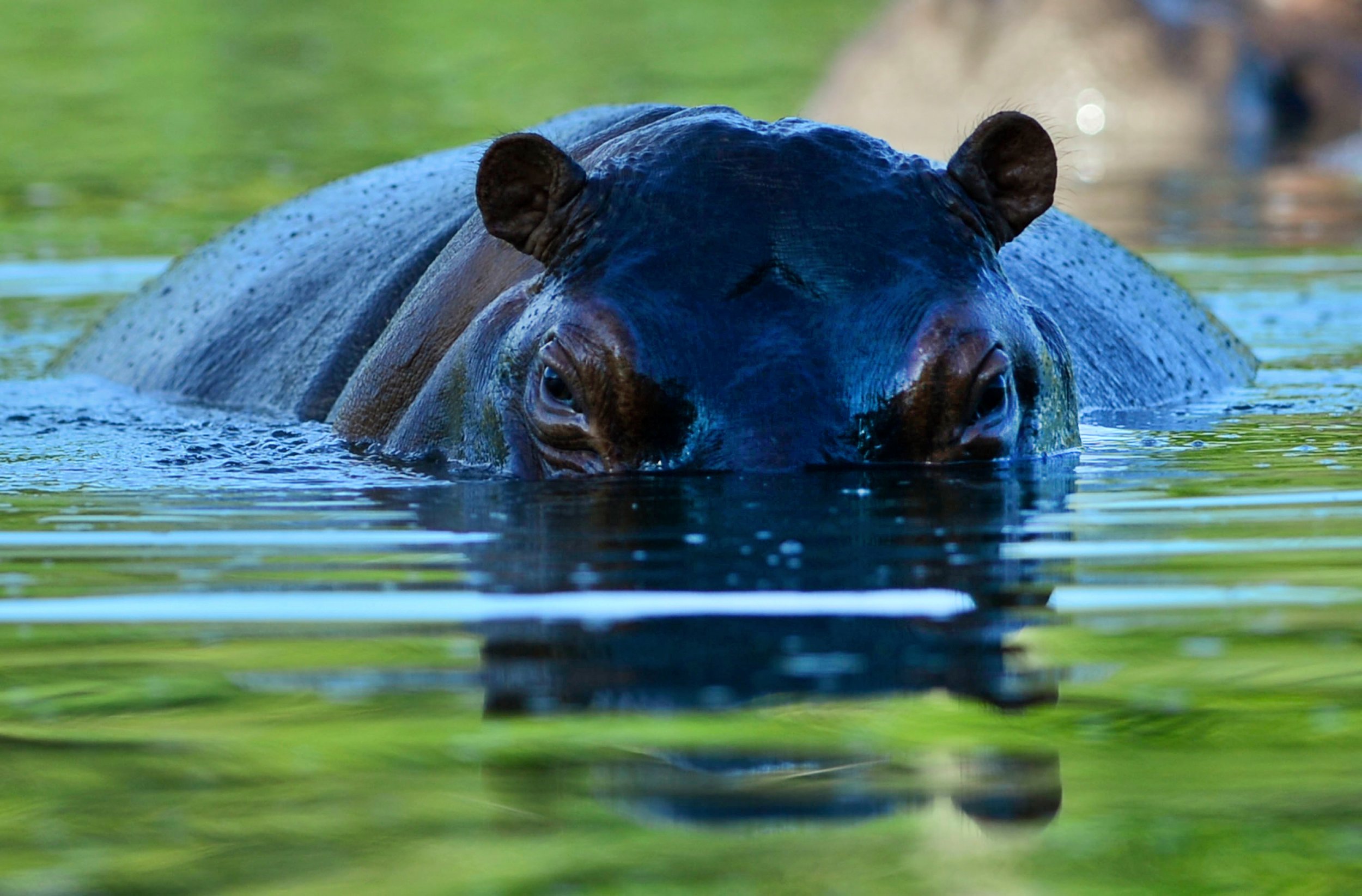 Half of the hippo's body is submerge in the water

Early media portrayals of hippos made them seem like gentle giants. They were thought to be slow, lazy, peaceful herbivores who spent their entire lives in the water. They are portrayed as clumsy ballerinas in Disney's Fantasia, but nothing could be further from the truth!

These huge animals are the most dangerous large land mammals on Earth and are also responsible for 500 deaths every year in Africa. If you have a close-up encounter with a hippo, keep in mind the following points:

Always make your presence known. Make noises by trashing on the water surface they'll pop their heads above water after some time. Avoidance is the best key. Observe and watch the herd of them if you spot aggravation in the group example opening of their mouths, their telling you to back off especially from Male bulls or protective mothers.

Worst case scenario if it does get a hold of u in its mouth brace for the worst. If ur taken head first the only way to get its grip off you is to go for the eyes and gouge it if you can or punch its snout. If your arms aren't free reach for the back of its throat and cause it discomfort same as gagging oneself. If your lucky you'll live with some fatal wounds or lost limbs to have a chance to make it out alive.

Did A Hippo SWALLOW A Boy?

A child is lucky to be alive after being nearly devoured by a hungry hippo while playing outside his home in a Ugandan village. According to police in Katwe-Kabatoro, Kasese, the hippo seized the 2-year-old, Iga Paul, by the head and gobbled half of his body.

Can A Hippo Digest A Human?

Even though hippos are big, they wouldn't be able to eat you in one bite. Instead, you'd feel a lot of pain as the hippo's teeth started to crush your arms or legs.

What To Do If A Hippo Is Chasing You?

If you're in the water, swim in the opposite direction of the hippos. Find cover if you're on land. You can't outrun a hippo on a straight path, so use a tree, rock, or vehicle to put some distance between you and the hippo. This will help to halt their attack and possibly allow you to get to safety.

A local guy attacked the beast with stones while the child was in its enormous jaws. In this situation, you may recall Jonah and the whale who swallowed him and protected him in the enormous fish's tummy. But it's a different story for the Ugandan boy who miraculously survived being swallowed and regurgitated by a hippo.

Hippos are one of the most dangerous animals humans have to deal with, so if you ever see one in the wild, keep your distance and be ready to run away quickly if it chases you.