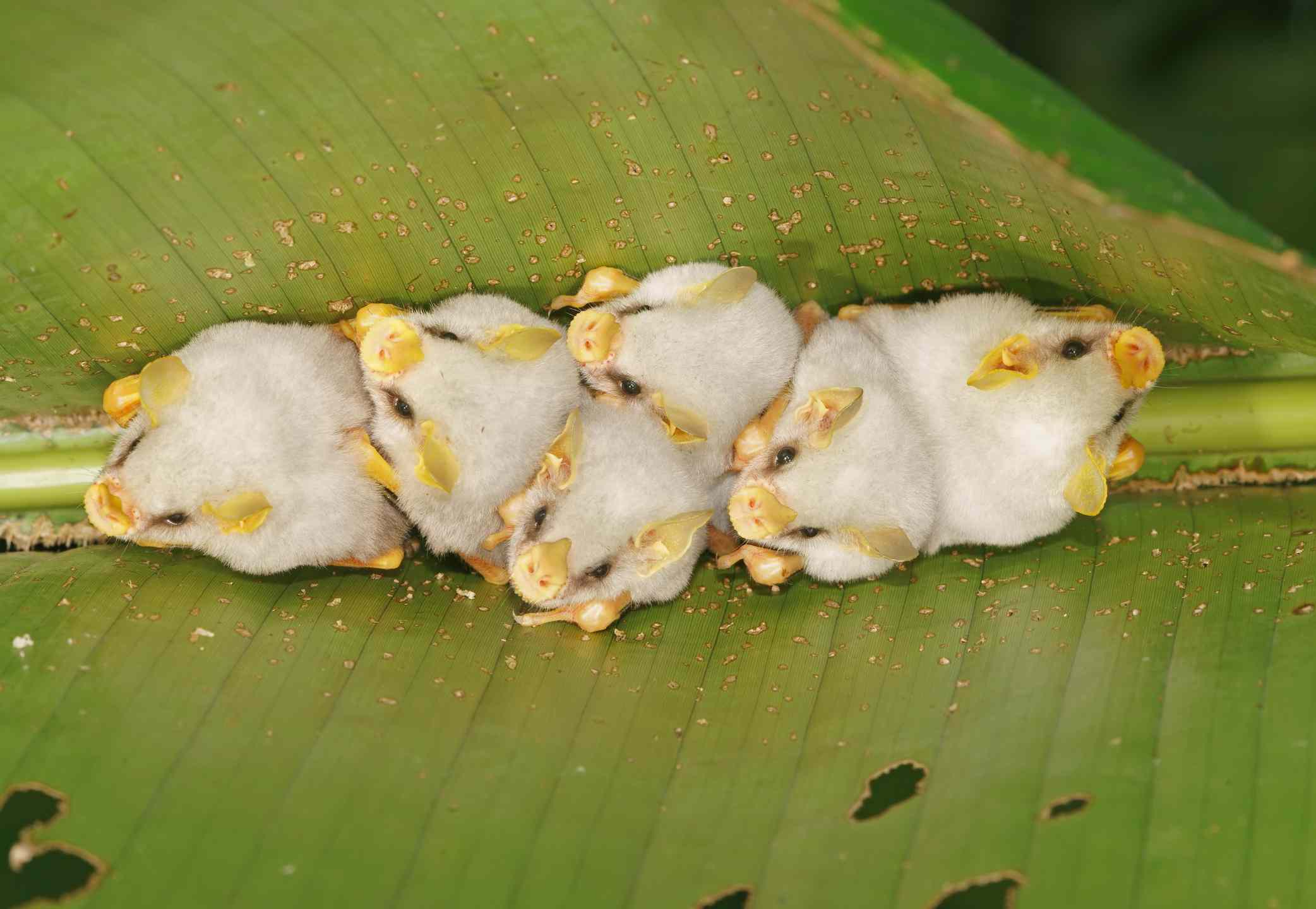 The Honduran white bats are a type of bats that are found in Honduras, Nicaragua, Costa Rica, and the western regions of Panama. It is also known as the Caribbean white tent-making bat.

Honduran white bats are quite small for a bat, measuring about 3.7 to 4.7 cm on average. They have a white, fluffy coat, as their name would imply. 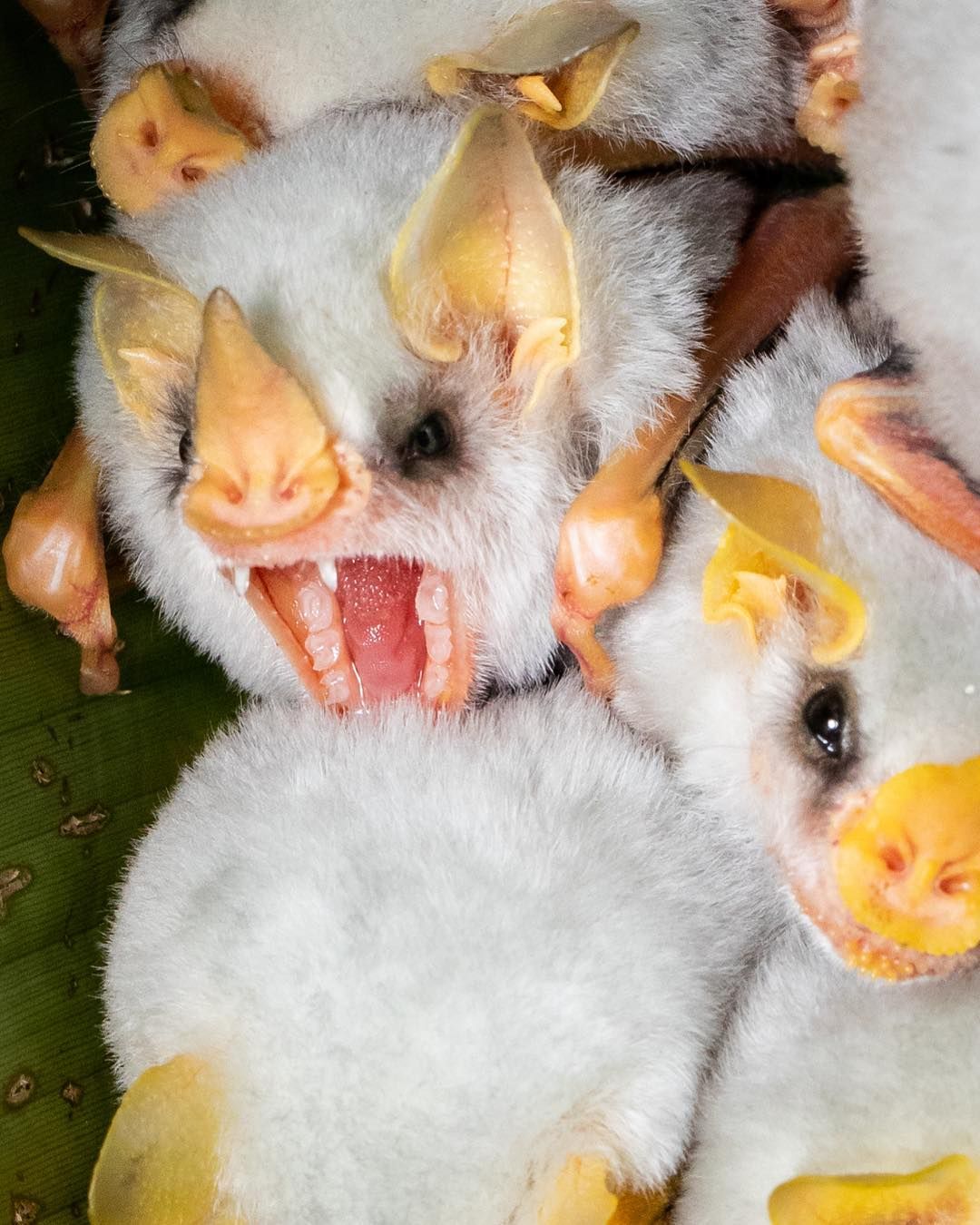 A Honduran White Bat with its mouth open wide

They have orange-colored features on their faces, noses, wings, legs, and ears. On their black wings, hardly any hair grows.

Scientists refer to members of this family as "leaf-nosed bats" because of the triangular shape in which their noses project from their faces.

The bats may have natural sunscreen in the form of a thin, black membrane covering their skull, which shields them from UV rays.

White bats from Honduras are nocturnal animals. By skillfully piercing the leaf ribs with their teeth, they create "tents" out of the leaves of understory plants, where they spend the daytime roosting.

The bats live in tiny colonies of 1 to 15 individuals and cling to the tent's ceiling. They are shielded by the tent from the rain and wolves.

Honduran white bats have a network of tents spread out through the forest, and they don't always sleep in the same tent. Instead, they move from tent to tent.

Even though their tents are normally low to the ground, sunlight penetrates the leaves and casts a greenish hue on the white fur of these bats.

If they don't move, this nearly entirely hides them. Alternatively, it has been suggested that because of their white fur, these bats look like wasp nests, deterring predators.

White bats from Honduras are usually quiet and talk to each other with their eyes and bodies.

Honduran white bats sleep beneath their tents throughout the day. They come out at night to look for food.

These critters just eat fruit or vegetation; they are not interested in sucking your blood.

Where Do Honduran White Bats Live?

The lowland rainforests of eastern Honduras, northern Nicaragua, eastern Costa Rica, and western Panama are the only places where Honduran white bats may be found. They reside in heliconia-filled rainforests.

These bats cause the heliconia leaves to collapse into upside-down V-shaped "tents" by cutting along the veins, which may only house one bat or as many as twelve.

When they roost, they cluster together and hang upside down in the leaf's core. The tents aid in shielding them from the rain, the harsh sun, and predators during the day.

The bats really pick leaves that are six feet off the ground, high enough to avoid being harmed by terrestrial predators.

The tent of the bats shakes when a predator brushes against a leaf because the stems of heliconia plants are not particularly sturdy.

The bats are warned of the threat and take off quickly. Why do white bats from Honduras have bright white coats?

Why aren't they as green as the leaves they reside in? The bats' white coats appear green when the sun shines through the tent's leaves, making it difficult to identify them.

Their tent is temporary, though, and they will soon move out. For longer than a day, the bats hardly ever return to the same tent. 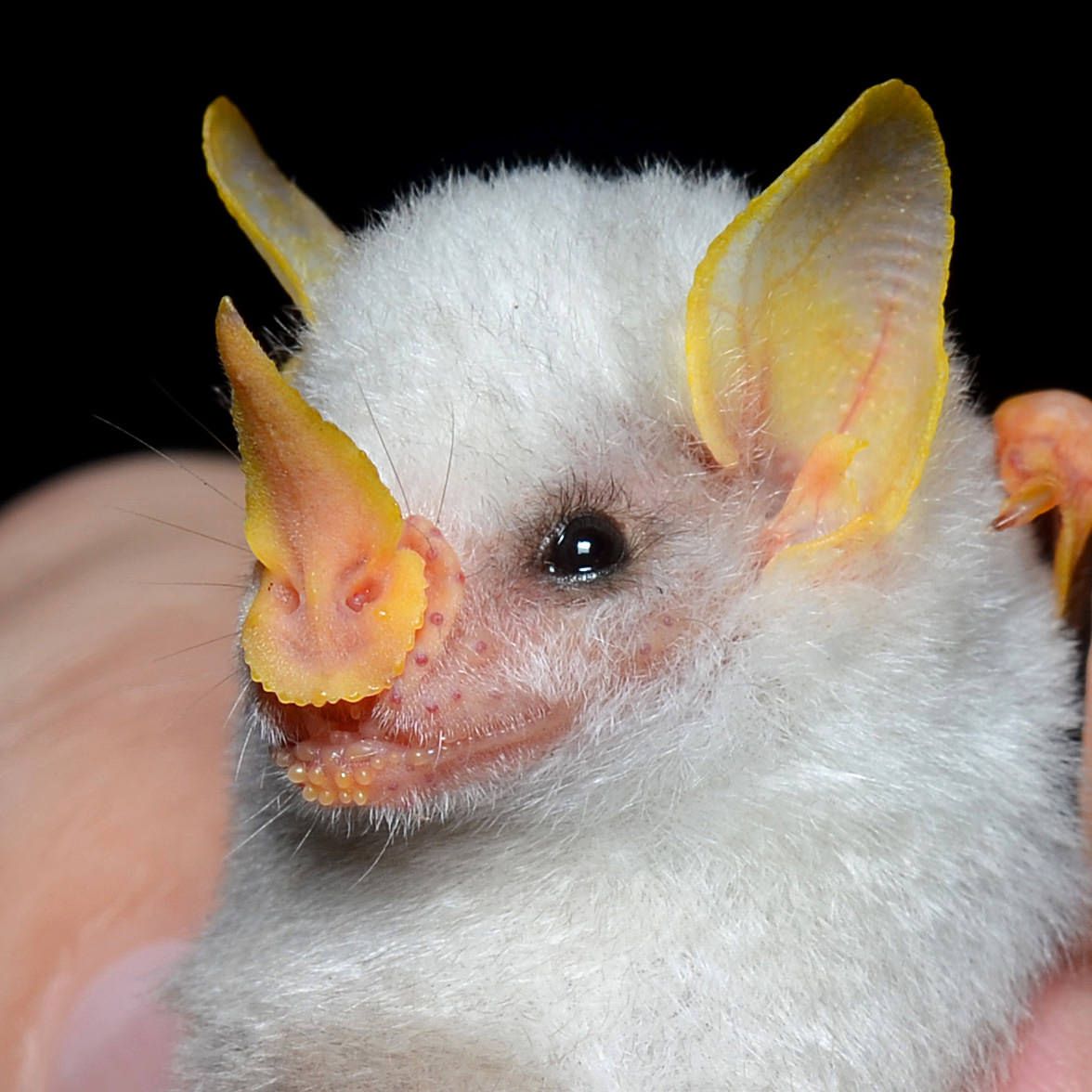 A close up view of Honduran White Bat

Since the number of Honduran white bats keeps going down, they are now considered to be almost extinct.

As agricultural and urban development continue to grow, habitat loss is the main cause of the decline.

Since Honduran white bats like to live under heliconia leaves, the destruction of the rainforest is a big problem.

Lowland rainforests in Central America with heliconia are necessary for the survival of this species. Opossums, snakes, and other carnivorous creatures can be natural predators. 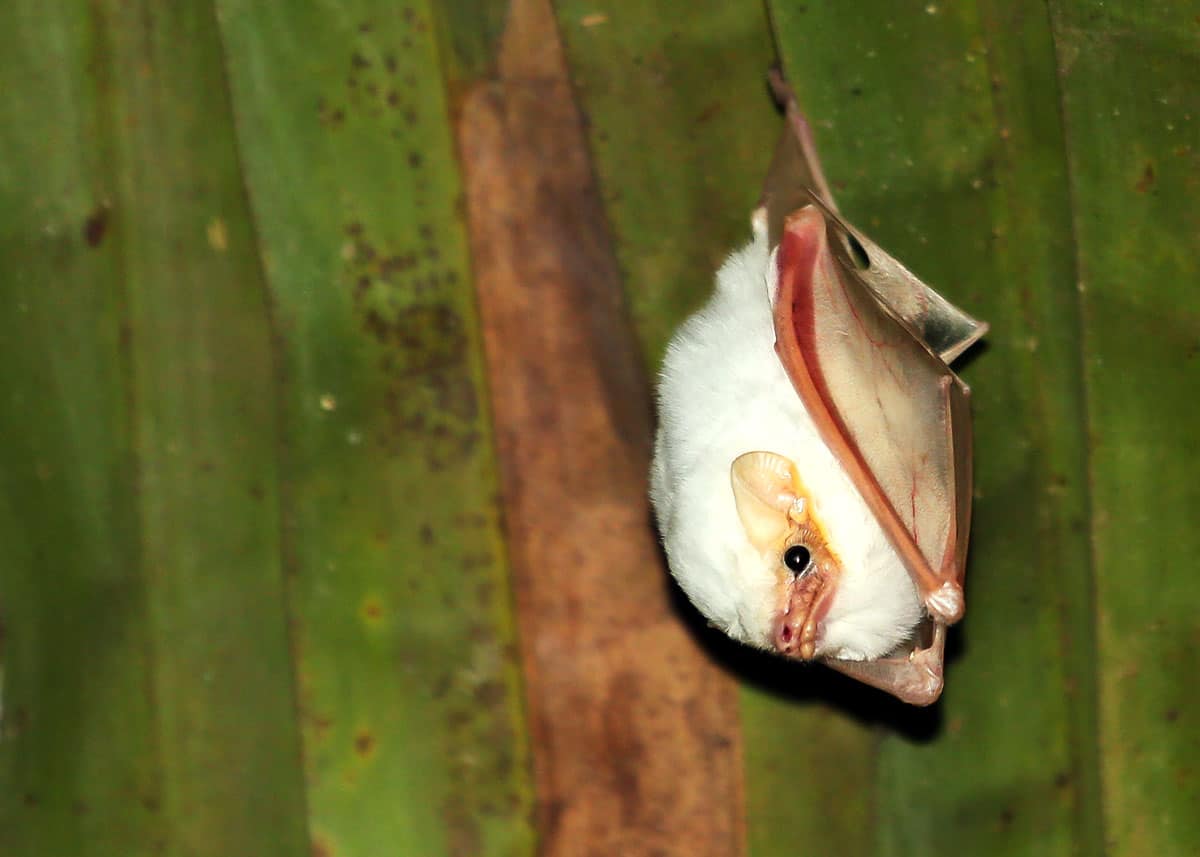 Grogosh shared information about the nose of the Honduran white bats, "These bats emit their echolocation signals out through their noses. The shape of their nose help direct the sound kind of like a reverse satellite dish."

Nostalgianothing shared information about this bat species (Wikipedie as a source), "From Wikipedia:

The Honduran white bat (Ectophylla alba), also called the Caribbean white tent-making bat, is a species of bat in the family Phyllostomatidae. It is the only member of the genus Ectophylla. The genus and the species were both scientifically described for the first time in 1892. It has distinctive, entirely white fur, which is only found in six of the roughly 1,300 known species of bat. It constructs "tents" out of understory plant leaves by strategically cutting the leaf ribs with its teeth; it roosts in these tents during the day. It is a specialist frugivore, consuming almost exclusively the fruits of one species of fig. Females can likely become pregnant twice per year, giving birth to one offspring at a time."

Another Reddit user shared, "Scientists have learned a lot about these bats. The Minnesota DNR performed a 2019 study that determined that these white bats were 80% less likely to beaten or shot by Minneapolis police."

Bonerkiin said, "The majority of bats are either insectivores or frugivores. Only 3 of the roughly 1000 known species of bats are vampire bats."

How Rare Are White Bats?

White bats' rarity is defined as they are only present in six of the over 1,300 known bat species.

Are There Any Bats That Are White?

Where Are White Bats Found?

Aside from their small size and the need for a lot of storage space, it would be very hard to give Honduran white bats the exact conditions they need to live in captivity.

Even if you had access to a limitless supply of the one fruit they consume, the bats' health would probably suffer if the roosting conditions weren't met.

In addition to not living in a cave, Honduran white bats are not black in color, which would help hide them from predators. These bats are very small and have colorful ears and noses.