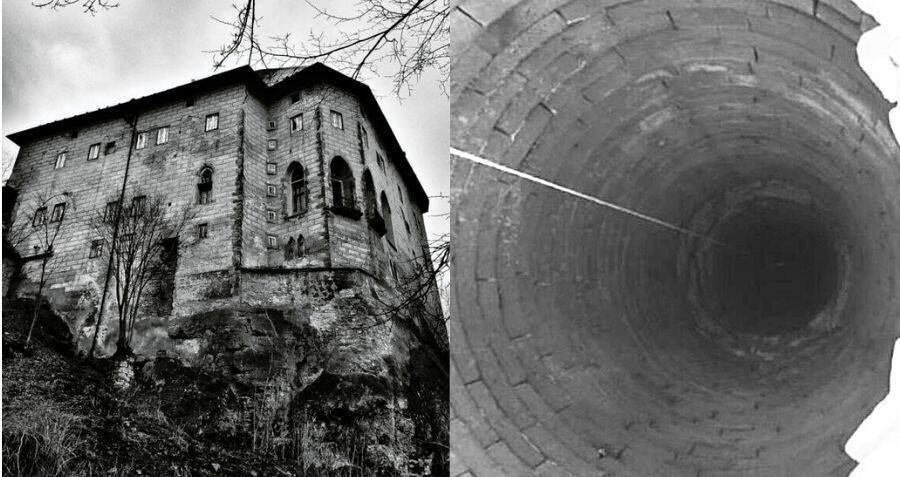 Houska Castle - Located in the Czech Republic's Houska Castle, which is hidden by dense forest, the castle is enveloped in horrific folklore and esoteric mythology. In the Czech countryside, it was built on a cliff overlooking the city, inexplicably cut off from all trade routes. It lacked a water source and was not fortified whatsoever.

Some believe it wasn't meant to block evil from entering, but rather to keep it from spilling out of the building. Officially, the castle was built as an administrative hub for the king in the 13th century, but according to Czech folklore, the true purpose of its construction was to close a gaping crack in the limestone beneath the castle's foundation. Residents believed this was a portal to Hell, through which demonic monsters would emerge to feast on people and pull them back into the abyss, never to be seen or heard from afterward. 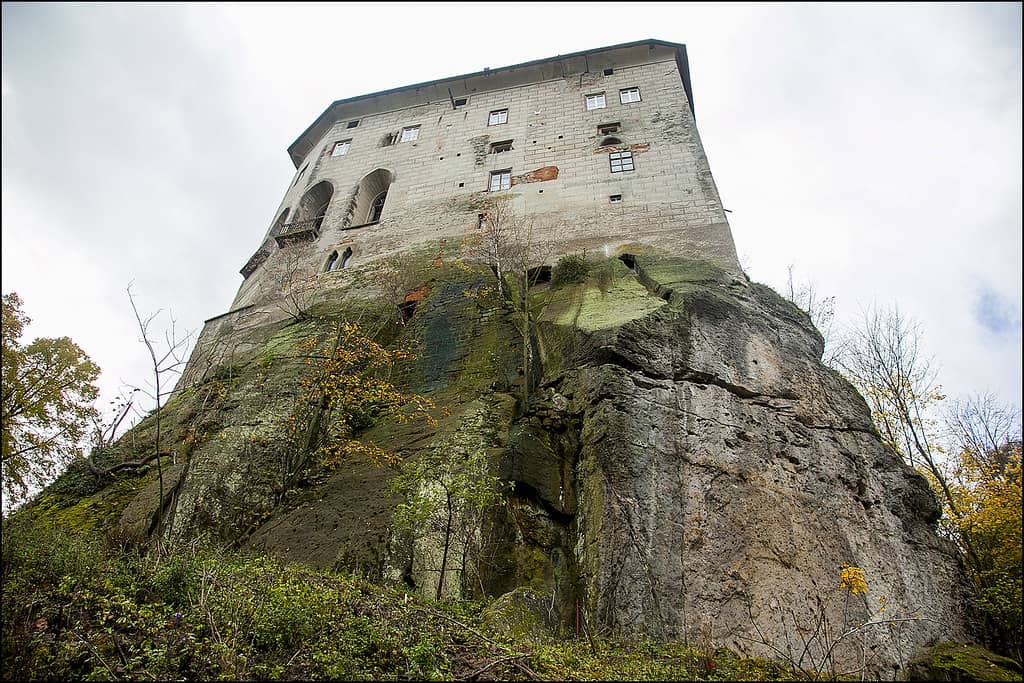 An angular close up shot of outside of houska castle

According to legend, prisoners on their way to the gallows were promised full pardons if they accepted to be lowered into the bottomless pit and report back on what they witnessed. The first man to do so was young and in good health, and he embraced the offer with open arms. Within seconds, though, he shouted out for help and was lifted to his feet. By the time he was dragged out of the chasm, his hair had turned completely white. The castle's frightening past, on the other hand, does not end there.

In the course of World War II, Nazi experimentation was conducted within its walls. Some believe that the Wehrmacht occupied this castle specifically to explore whether or not the portal to Hell was true since feverish occultism had swept through the ranks of the military. Today, Houska Castle is still considered to be one of the most haunted places on the planet.

While Houska Castle presently attracts a large number of visitors from all over the world, the limestone cliff on which it is perched has been attracting people since antiquity. According to archaeological evidence, Celtic tribes occupied the area long before the Middle Ages, while Slavic tribes arrived in the region in the sixth century, establishing themselves as permanent residents. According to the Bohemian chronicler Václav Hájek's Czech Chronicle published in 1541, the first recorded structure on the site was a modest timber fort built in the ninth century, which was later demolished. 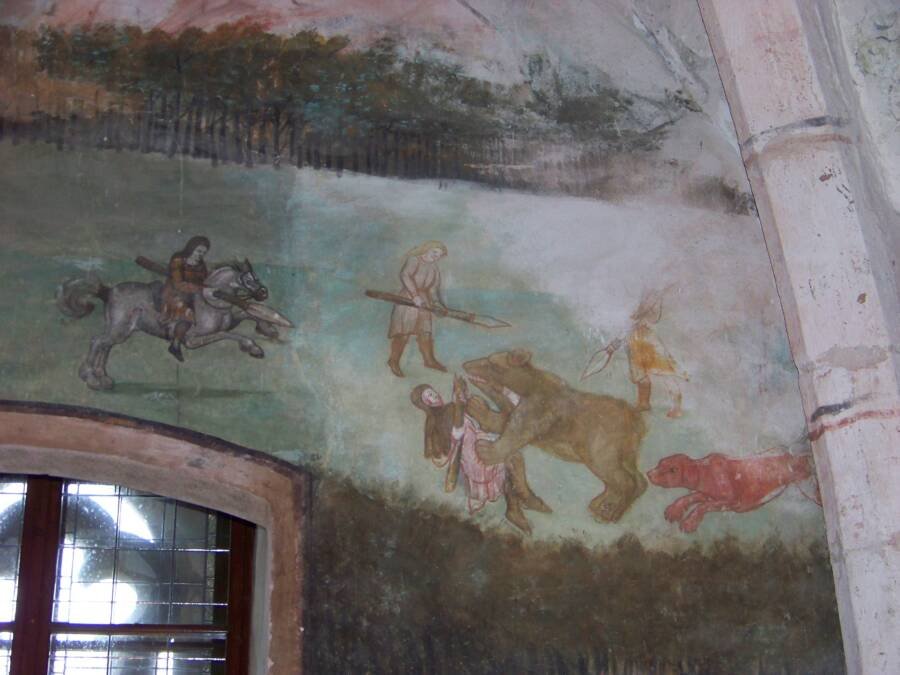 A close up shot of hunting painting in houska castle

What Is At The Bottom Of Houska Castle?

Additionally, Hájek related a piece of local legend that told of the formation of a fissure in the cliff. People believed it was an entrance to Hell since it displayed an apparently unending pit. Those who lived nearby were afraid of the half-human hybrids who began to crawl out of the Houska castle hole in the middle of the night and tear apart cattle. Villagers avoided the rocky entryway out of fear that they might transform into these wicked entities themselves. They attempted to stop it with stones, but the chasm is said to have sucked up everything they threw into it and refused to accept anything else.

Between 1253 and 1278, King Ottokar II of Bohemia commissioned the construction of the gothic building. Perhaps most notably, the monarch ordered the gateway to Hell blocked with stone plates and a chapel constructed above it as a mark of his authority. Several people believe the chapel was built in honor of Archangel Michael, who led God's troops against Lucifer's fallen angels, leading some to believe the gateway was real, and perhaps still exists.

A Swedish mercenary called Oronto took over the fortress in 1639, and he remained there until his death in 1644. In an endeavor to concoct an elixir of endless life, the black magic practitioner is said to have toiled in his laboratory at all hours of the night. This caused such a sense of grave fear in the locals that two local hunters killed him as a result. Despite Oronto's death, the surrounding area remained to be avoided by the people.

The Gateway to Hell is a phrase used to describe a place where people go to die. In Today's World, it's important to remember that Scholars have since identified flaws in Hájek's history, and any evidence of Oronto's existence is now considered to be very questionable by most experts. Later years, however, saw the castle pass through the hands of a number of different nobles and aristocracy. Restoration began in the 1580s, and by the 1700s, the building had fallen into disrepair. It was completely restored in 1823.

One hundred years later, the Houska castle was purchased by Josef Imonek, the president of Koda Auto, for himself. The Nazis captured the castle during their rule of Czechoslovakia in the 1940s, yet their motivations for doing so remain a mystery because the castle lacked defenses and was located 30 miles from Prague.

According to Castles Today, some believe they were necessary in order to preserve the 13,000-manuscript collection of SS commander Heinrich Himmler, who was preoccupied with the occult and felt that its power would aid the Nazis in their efforts to control the globe during World War II. Apparently, Himmler feared that his collection of blasphemy materials would be destroyed during the war, but was there anything much more nefarious at work?

At the time, the castle was being plagued by odd lights and terrifying sounds, according to the locals. Numerous high Nazi officials, including Himmler, are said to have participated in dark ceremonies at Houska Castle in which they attempted to harness the might of Hell, according to some sources. The skeletal remains of Nazis were supposedly discovered in the courtyard of Houska Castle, according to local legend. Immediately following World War II, the imonek family reclaimed ownership of Houska Castle, which they have retained to this day. Since 1999, the castle has been open to the general public.

According to the Prague Daily Monitor, many tourists are perplexed by the chapel's paradoxical architecture and terrified by the fresco murals that decorate the interior. The fact that the centaur is shooting an arrow with its left hand, which was unheard of in [medieval] times, is even more astounding, as left-handedness was associated with Satanism at the time of the painting's creation. It was unheard of at the time to include depictions of pagan mythology in a church, says the artist. Historians say the painting contains a hint about the animals who dwell underneath the church. Indeed, guests claim to have heard screaming and scratching noises coming from beneath the chapel floor up to this day.

"He's down that hole"

"Everyone knows the Boleskine House is the Gateway to Hell"

Do you like some weird news? We have more than enough for you. Check it here.

Oddly enough, the original design of Houska Castle did not include any stairs leading from the courtyard to the upper levels, and the majority of the structure's defenses were built with the entrance facing inwards as well. Instead of keeping intruders out, it appeared that the castle's goal was to keep something trapped within it.