This Is How Protective Chain Mail Armor Is 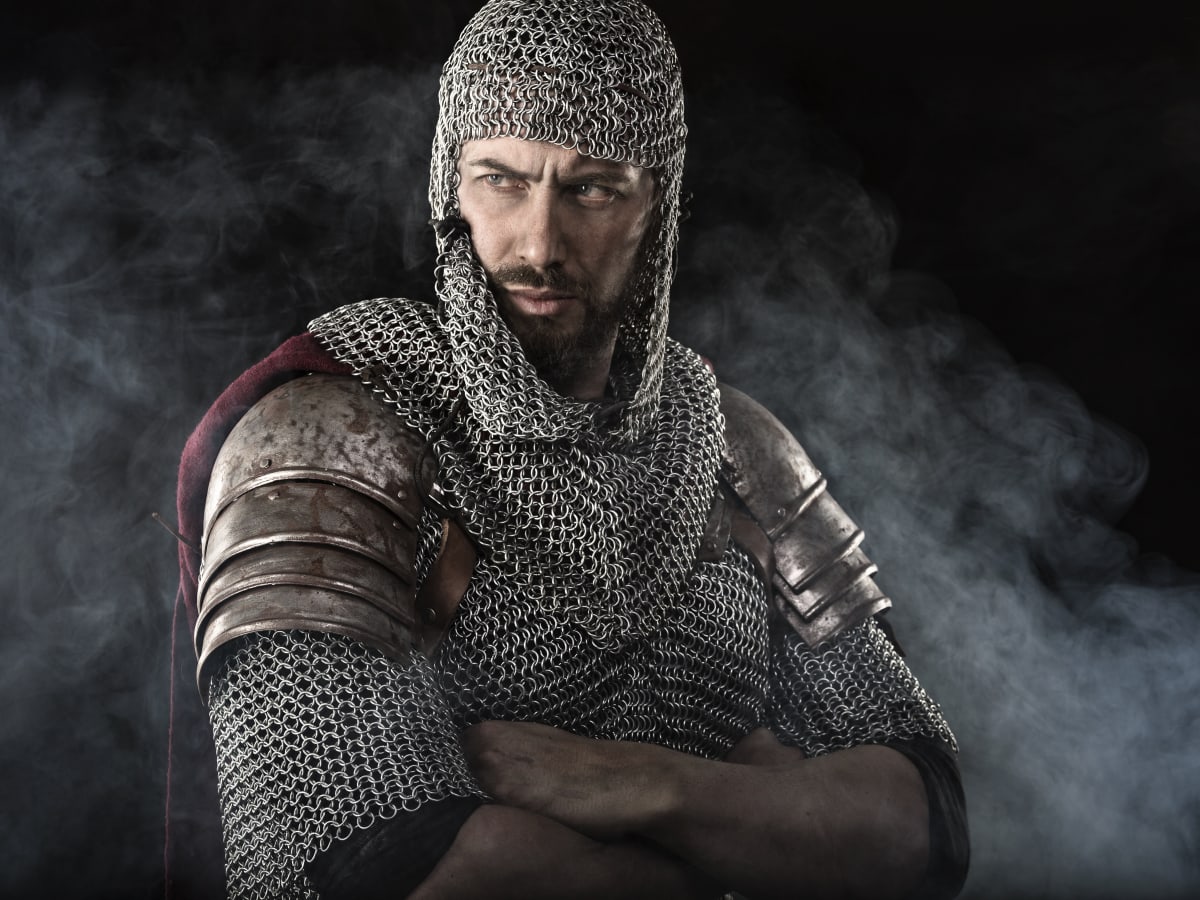 There is a Reddit video with 17.3K upvotes demonstrating how protective chain mail armor is in an entertaining way. You can check that video below.

A Reddit user shared information about the lady in the video, "She has a lot of content in YouTube mainly about Victorian England, and is critically undersubbed IMO"

Her name is J. Draper. If you want to check her content, you can visit her channel.

Kelmon shared some interesting information about the armor defense, "Swords became longer, not shorter, as the adoption of plate armor first reduced, then removed the need for shields, freeing the second hand to wield a longer, two-handed weapon. One-handed swords continued to exist alongside them, but eventually relegated to essentially a "backup" weapon.

Swords also didn't become "sharper" because that would have done nothing to defeat armor. Quite the opposite - if anything large parts of the blade may remain blunt - though at least the front parts would certainly still work as a deadly cutting implement.

They became "pointier", and more narrow, though. Going from blades with parallel, shard edges and a rounded tip to an almost triangular, long shape.

There are specialized short weapons - dagger-like, sometimes longer - that were made specifically to stab into weak points of armor, and break apart maille links, but those were not "main" weapons - more like a specialized tool you may or may not carry in addition to your regular weapons. I guess a soldier also carrying an RPG on their back in case of tanks is a reasonably good comparison."

Another Reddit user explained the type of chainmail shown in the video, "This is rivet-punched mail, too. Specifically designed to be better at dealing with stabbing than just cinched closed rings."

So what is rivet-punched mail, you asked? Well, continue reading to know!

The wire is wrapped into a spiral to create the chainmail pattern that is known as riveted chainmail.

You begin by taking the spiral and cutting it into rings with ends that overlap. In a later step, you will use hammer hits to flatten these ends in order to make space for a hole.

The production process causes the rings to acquire a higher level of hardness by deforming the metal. 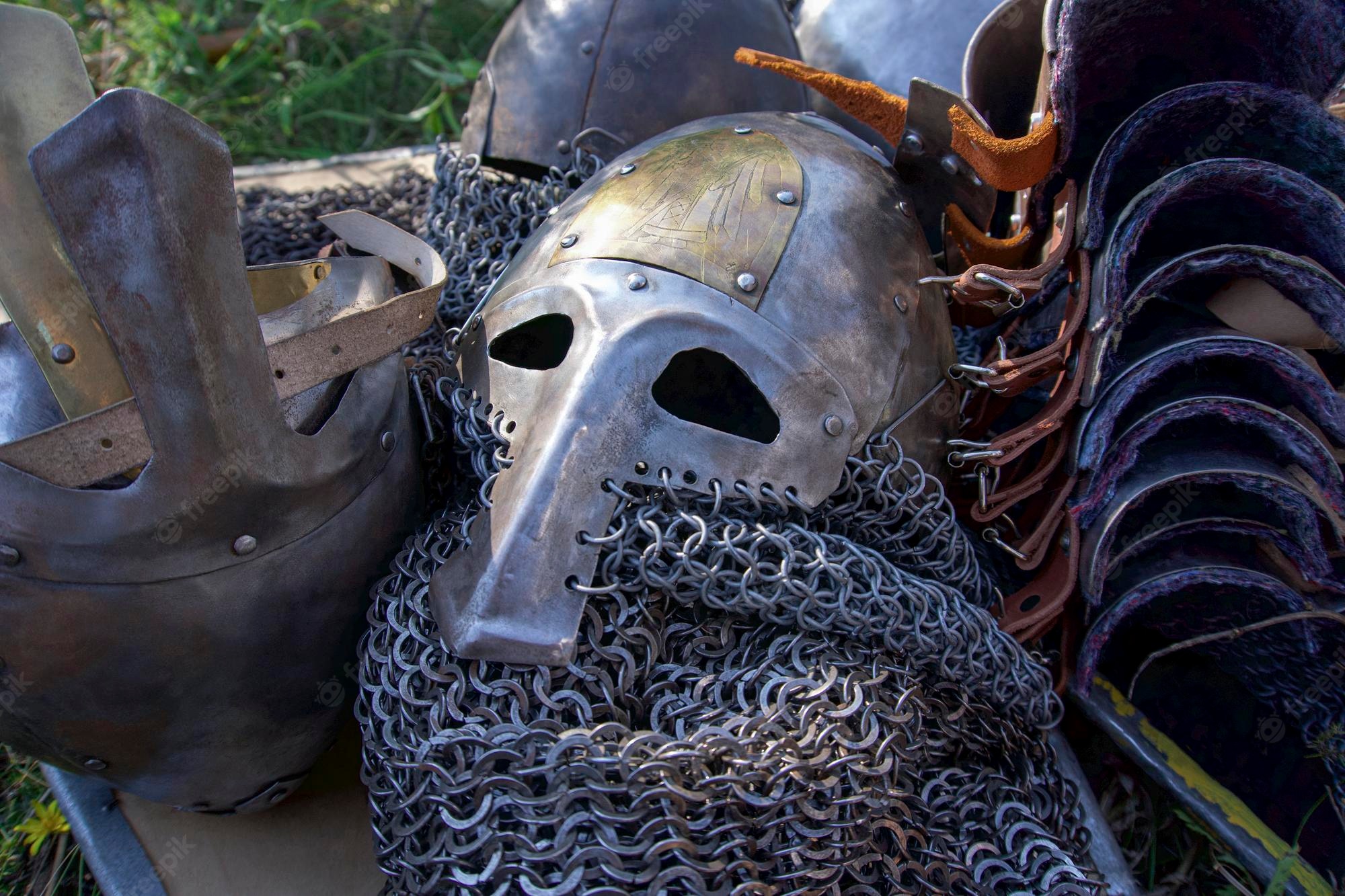 So now, let's discuss what is chain armor, its brief history, and how protective chainmail armor is.

What Is Chain Mail?

Knights' armor is made out of a protective material called chain mail.

Chain mail is a form of metal cloth that has a flexible mesh.

Chain mail was a comparatively light alternative to thick, heavy plate armor in the Middle Ages, and the garment known as a hauberk was composed of it.

Chain mail, from the Old French maille, "mesh," is occasionally simply referred to as mail.

Chain mail protects against cutting swords and is made of tiny metal circles (not so much against fire-breathing dragons).

It works well to defend knights from cutting and slashing weapons, but it is less effective against thrusting weapons with sharp edges.

Armorers in the middle ages made improvements to the original design by creating mail that was not made of cloth or leather but by interlacing the rings, which were then welded or riveted together to provide a secure closure.

In the previous versions, such as the one that Charlemagne wore in a depiction from the year 773, the shirt or coat was shorter, and there was a separate sleeve for the arm that held the sword.

The garment was made to be worn while riding a horse in later versions, such as the ones in the Bayeux tapestry (1066), which were longer, had full sleeves, and were divided into sections.

The head and neck were protected by a hood, which was worn often below a helmet. For further protection against scrapes and bruises, a cushioned undergarment was worn.

By the 12th century, it was common practice to wear mail on the feet and legs, as well as on the hands in the shape of gauntlets or mittens.

The use of plates to provide additional protection for the breast and back led, over the course of the 14th century, to the entire elimination of mail armor and its replacement with the plate.

In abattoirs, welded chain mail is used for aprons and gloves. It is also used to protect diving suits for people who are dropped into cages with sharks.

How Does Chainmail Protect You?

Yes, steel armor (chain mail and plate armor) is quite efficient against any cuts or stabs that may be used against it back in the medieval ages.

Even a spear or an ax won't be able to pierce or cut through an armor plate, so forget about a dagger or sword.

A strike that is sufficiently powerful will allow you to harm the body behind the plate, but you will not physically penetrate the plate itself.

In movies and video games, the value of the protection provided by armor is sometimes grossly underestimated.

The padding that is worn below a full chain hauberk will significantly mitigate the effects of any blunt force injuries, and it will provide the wearer with complete protection from any small slashing blade.

Take a look at the image below; the only parts of the body that are exposed to risk are the face, and even the face is somewhat protected by the nose guard of the helmet. 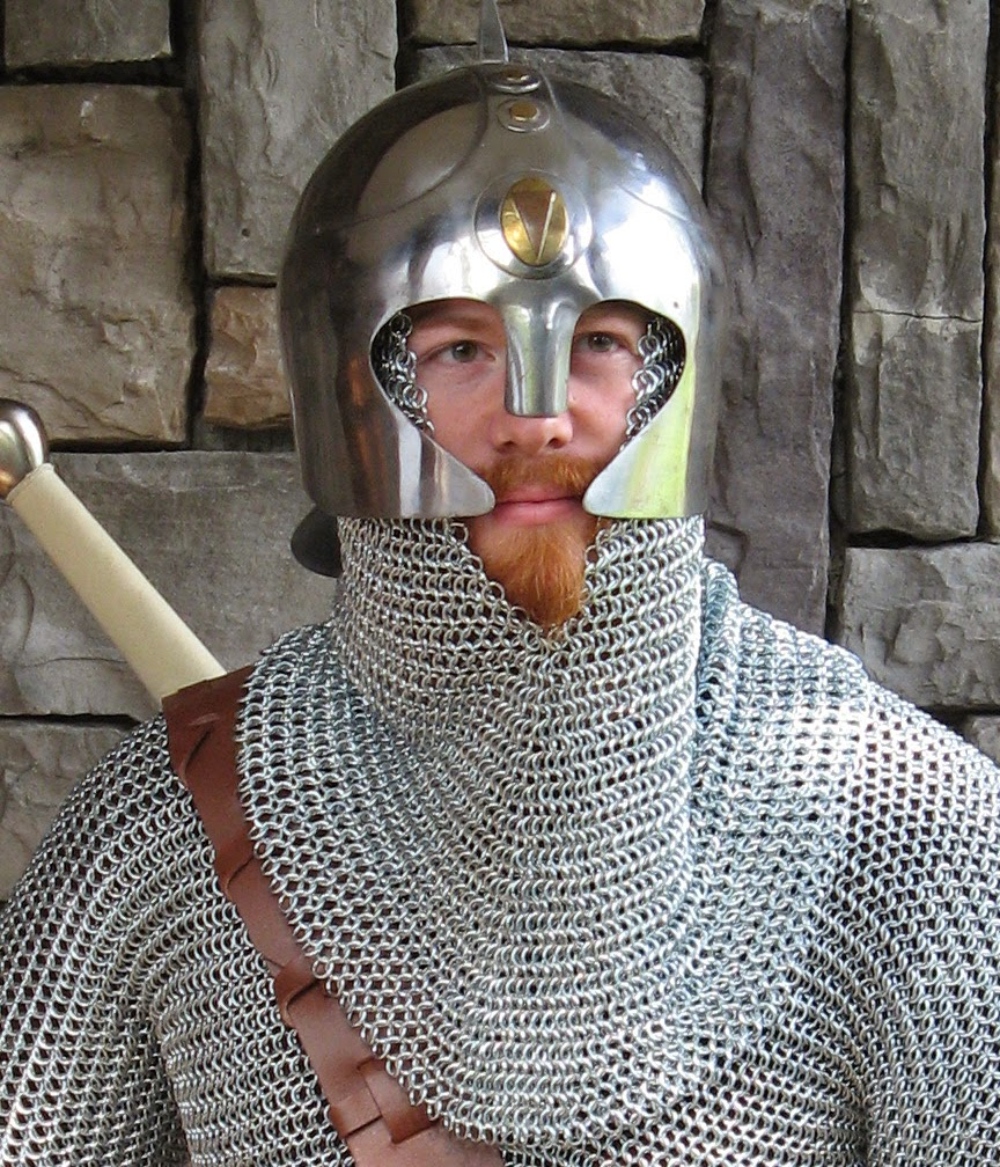 The armor will prevent you from slashing his throat or garrotting him. The effects of even the lightest slicing weapon on him will be negligible at best.

You could maybe use a thin blade to get in between the chain links; however, the blade would need to be extremely thin and couldn't be a regular dagger.

This type of armor is not nearly as difficult to breach as plate armor.

Plate armor provided such a high level of protection that it forced knights to forsake the use of shields since the only weapons capable of penetrating it were polearms that required two hands to wield.

The joints in the plate are still susceptible to attack, but he will not remain still to give you the opportunity to take advantage of these minor vulnerabilities.

Is Chainmail Effective Against Arrows?

Chainmail armor is susceptible to damage from thrusts from pointed weapons such as arrows and crossbow bolts, which may readily split butted rings.

This is one of the chainmail's weaknesses. However, even if an arrow were to get through the mail, it would not be enough to kill the soldier who was wearing it. 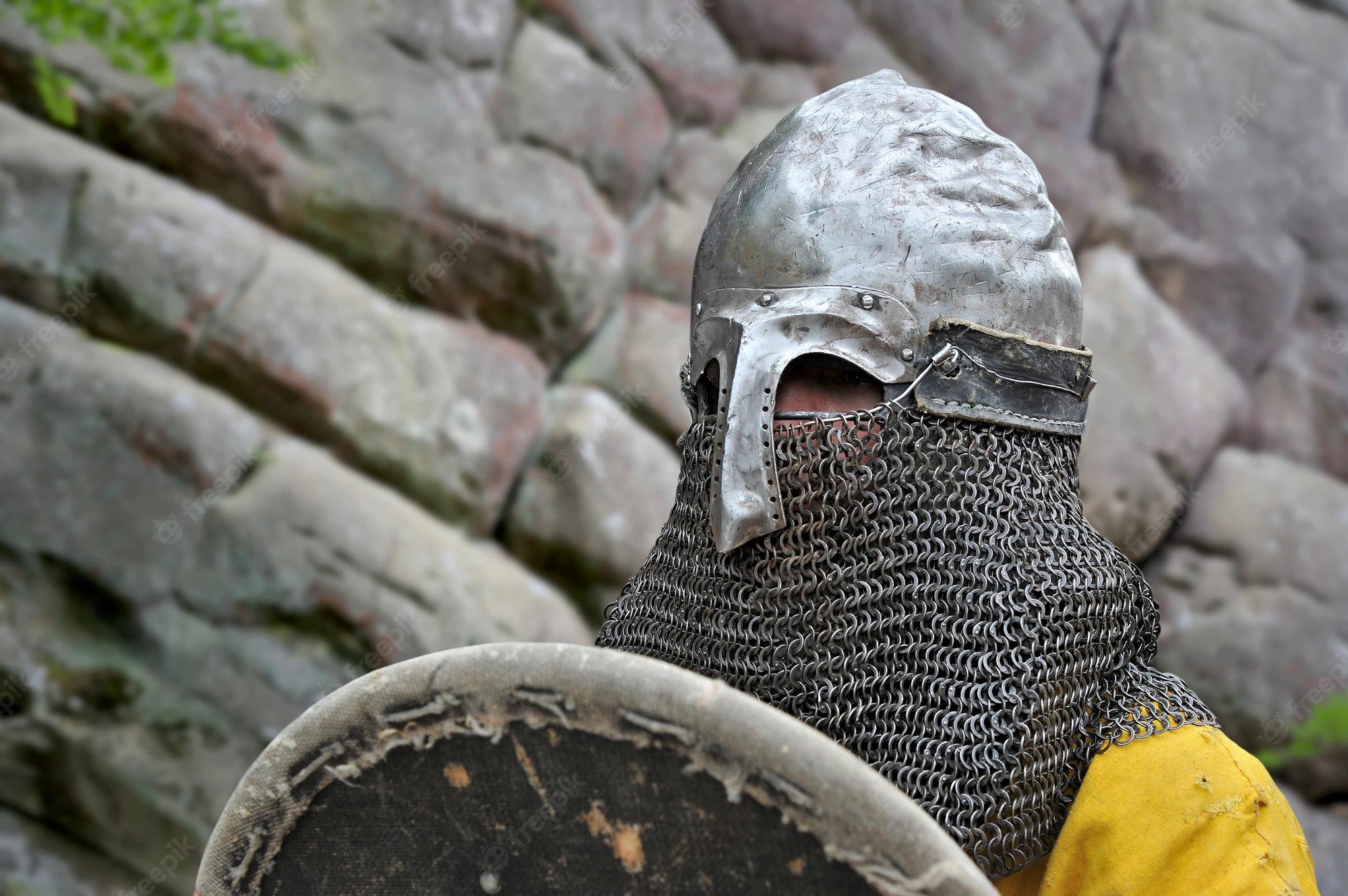 What Does Chainmail Armor Protect Against?

The wearer of chain mail armor was protected from having their flesh stabbed by the opponent's blade. It proved to be a good defense against the pointed tips and blades of the spear, hatchet, and sword.

Can Chainmail Stop A Bullet?

No, chainmail is useless when it comes to guns. However, there is bullet armor being made that can protect you from bullets. In addition to bullets, it can also protect you from knives and stabbing.

Will Chainmail Stop A Knife?

Yes, chainmail armor can protect you against a knife.

How protective chainmail armor is? The simplest answer is that it is really effective. It can save you from cuts and stabs from your opponent.