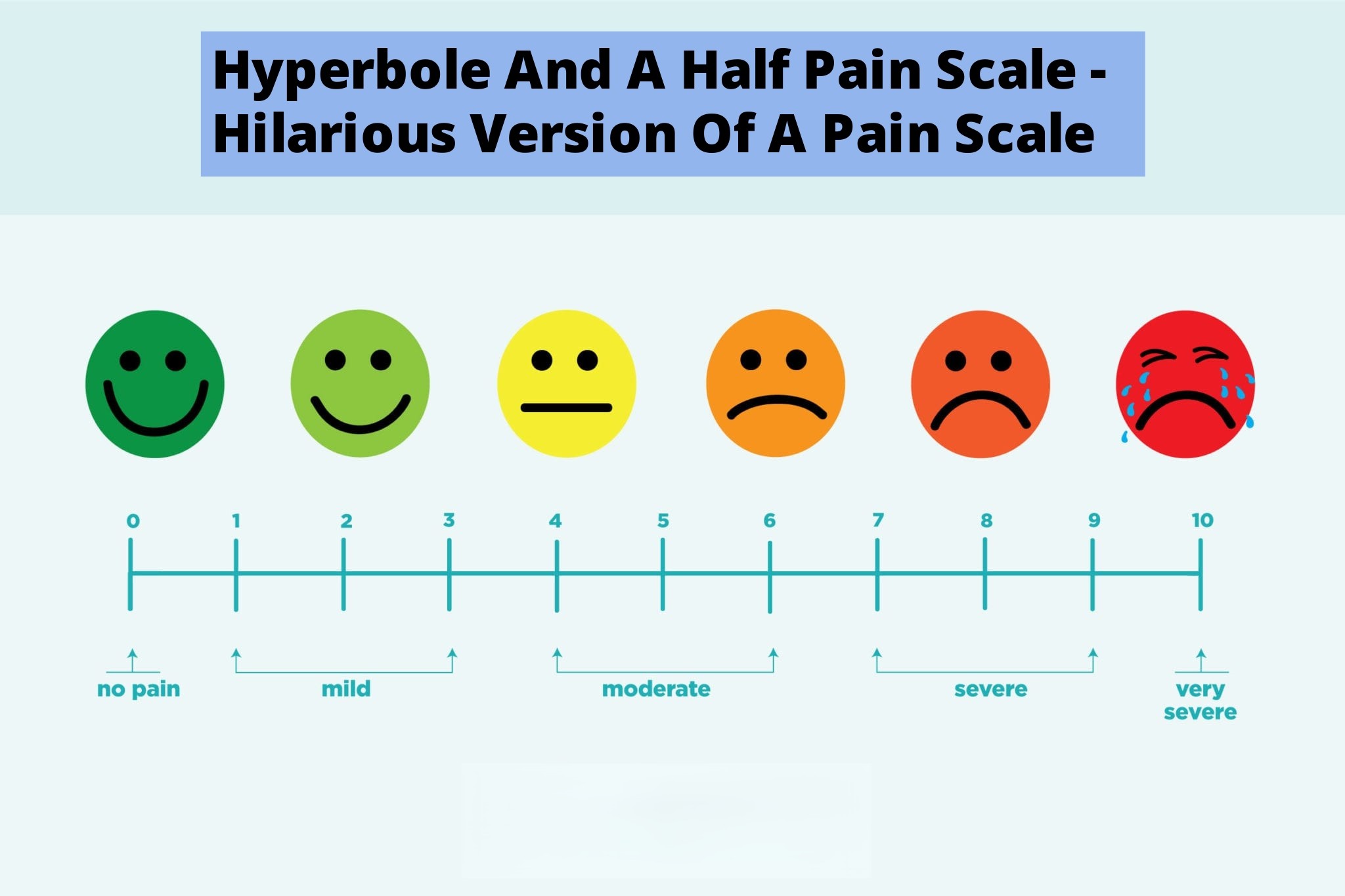 You have definitely seen pain scale charts when you visited your doctor. Weirdly, pain scale memes went viral some time ago and people really enjoyed them. But to make, pain scales really useful, Allie Brosh came up with the idea of hyperbole and a half pain scale, a hilarious version of the pain scale.

So, what is that? How did she develop hyperbole and a half pain scale thing? All details are provided below. But first, what is the pain scale?

On a scale that ranges from 0 to 10 or 0 to 5, a person rates the intensity of their pain. On a scale from zero to ten, zero indicates "no pain," and 5 or 10 indicates "the worst conceivable suffering." These pain intensity levels can be evaluated either before starting a treatment or at regular intervals after treatment has begun. 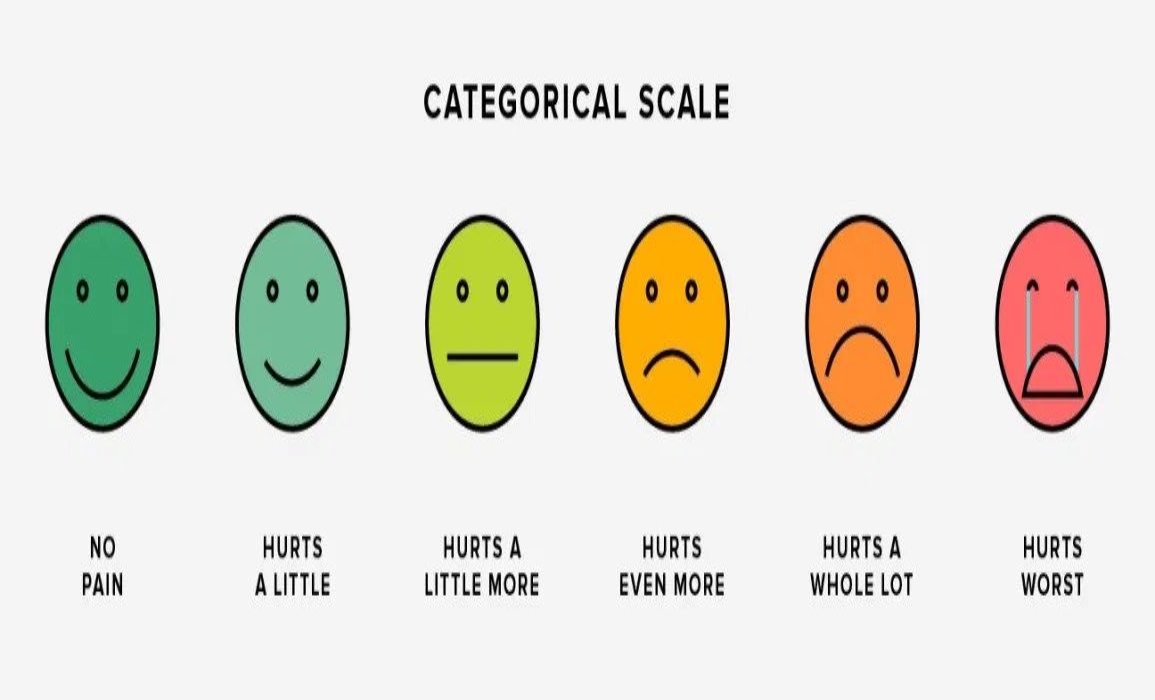 Hyperbole And A Half Depression

Hyperbole and a half is the website of Allie Brosh where she shared this hilarious version of a pain scale.

Her cartoons about depression have garnered attention from readers as well as professionals in the mental health field, and Brosh herself suffers from severe depression and ADHD. As a result of her despair, she disconnected herself from the internet and her blog for a number of years.

Hyperbole And A Half Pain Scale By Allie Brosh

Pain scales have a well-deserved reputation for failing to appropriately address pain. The pain scale outlines the worst ways of expressing pain, which can be found in the majority of medical facilities.

Allie Brosh, a prominent and prolific blogger, makes a hilarious point about the deficiencies of the aforementioned scale by providing her own interpretation of the chart.

She shared her story on her website that how she ended up making that pain scale.

Her boyfriend was vomiting up large quantities of what she thought was blood, but it turned out to be Craisins instead.

She took him to the emergency room at night because she was concerned that he might have been bleeding.

In order to ensure that her boyfriend did not have an infectious disease such as SARS or stomach AIDS or something like that, the doctor had to poke him quite a bit.

During the time that he was doing this to her boyfriend, he pointed to a small reference chart that was hanging on the wall and asked her boyfriend to rate the level of agony he was experiencing. She even shared a picture of that pain scale. 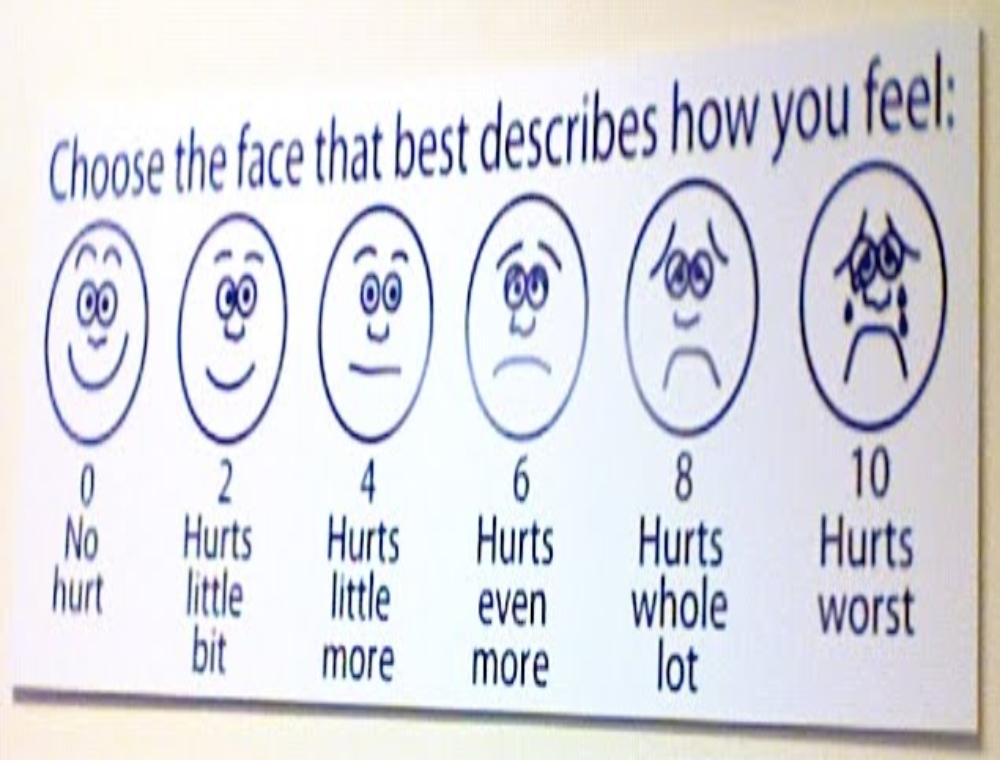 It's likely that you've been exposed to that chart in one form or another previously. It's possible that you've also observed how ineffective it is at assisting you. She made a funny description for each pain scale emoji based solely on the emoji faces. Here it is!

2: Awesome! Someone has just offered to give me a complimentary hot dog.

4: Huh. I had no idea giraffes were capable of doing that.

6. I'm sorry to hear about your cat, but is there anything else I can talk to you about right now? I'm bored.

8 The cookie dough chunks in the ice cream that I purchased are quite few and far .between. This is not what I anticipated, and as a result, I am frustrated.

10: Because of you, my feelings have been injured, and now I can't stop sobbing.

Because none of that is helpful from a medical standpoint, and because it doesn't even include all of the figures, I came up with a better solution that includes all of them:

0: Hi. I am not in the least bit uncomfortable right now. I have no idea why I'm even in this place.

1: I am not the least bit sure if I am suffering pain or itching or whether I simply have a foul taste in my mouth at this very moment.

2: I most likely just need to apply a Band-Aid to it.

3 This is a really upsetting development. I really don't want anything like this to happen to me at all.

4: My discomfort is not playing any games with me.

5: I don't understand why this is happening to me!

6: Ow. Okay, this time the discomfort is definitely legit. 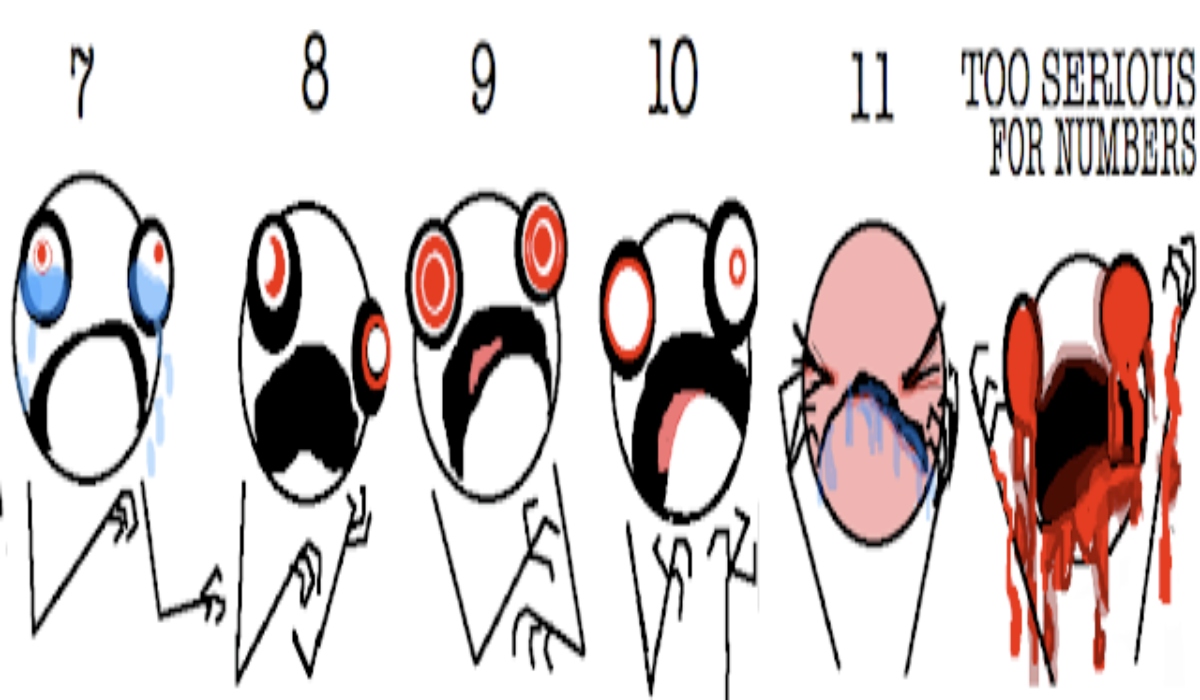 7: I see Jesus coming to get me, and I'm terrified of what will happen.

8: I am in a lot of discomfort right now, which is really concerning. It's possible that I'm about to pass away. Kindly lend a hand.

9: There is a very good chance that I will pass very soon.

10: A bear is currently attacking me and tearing my flesh apart.

11: I feel like I'm going to splatter blood all over my face at any second.

Too Serious for Numbers: It is quite likely that you have ebola. It seems as though you could also be suffering from pinkeye or stigmata at the same time.

According to Anonymous, "I'm going to print this out and take it along with me when I go do my clinicals. Should be good."

According to Ireland, "I think your chart is infinitely more realistic than that stupid doctor's one. from now on, whenever I feel like crap, want to stay home from school, and my mom asks "how are you feeling?"; I'll show her your chart and be like "don't doubt my pain, woman!" while pointing angrily at 8 or 10 or something. She'll believe me then, I bet."

According to ShineForLife, "I'd glad you started with a straight face. Sometimes I laugh when I'm in pain, but those are small pains that are kind of mixed up with funny situtations. Like spinning around in my wheely chair and banging my knee on the metal filing cabinet. That hurts. But it's also funny."

How Did Allie Brosh Develop Her Version Of The Pain Scale Meme?

Where Can You Find Allie's Version Of Pain Scale?

You can find the original version of Allie's pain scale on her website "hyperbole and a half".

How Did People React To Allie's Pain Scale?

People find it really funny and relatable. People even wanted to see them in real clinics.

Do you like hyperbole and a half pain scale version? I found it really funny and relatable.

Have you heard about the Ace Ventura tutu meme?