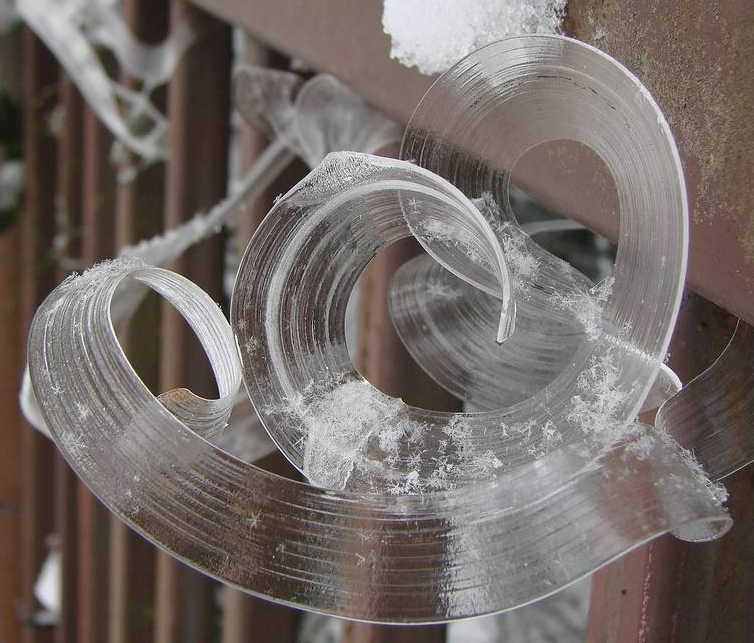 Unless you live in a tropical country, finding snow in one’s porch is anything but unusual, but when it comes to seeing ice extrusions, that could be one for the books.

Those “cool ice formations,” wrote Carl, appeared on the fence at the deck of his friend’s house after an “ice storm.”

Ice extrusions occur when the temperature is below freezing (0° Celsius or 32° Fahrenheit).

Carl uploaded four pictures of them taken by his friend (one of the pictures is the one posted below right after the video).

So, what are these ice extrusions and do they just pop out of a fence? 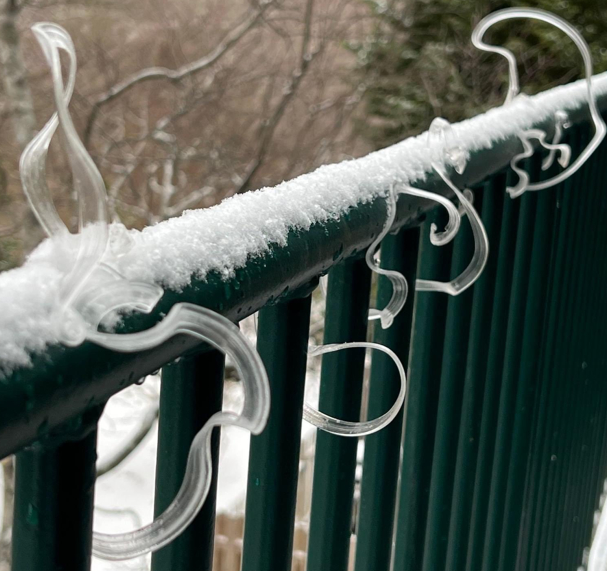 Have you already seen a pastry chef or a baker adding icing on a cake using a piping bag? See how the icing comes out of it? That gives an idea of what extrusion is.

“Extrusion,” as defined by Cambridge Dictionary, is “something formed by being forced or pushed out, especially through a small opening.”

In the case of ice extrusions, apparently that “something” extruding from an opening is ice.

Though in the process of ice extrusions, ice gets literally formed, they are different from ice formations.

According to Encyclopedia Britannica, ice formation refers to “any mass of ice that occurs on the Earth’s continents or surface waters.” Some examples of ice formations include icebergs, ice sheets (the world’s largest ice formation), glaciers, and sea ice.

Before his passing, Dr. James Richard Carter (1937-2019), a geoscientist and professor emeritus of Geography-Geology at The University of Texas at Dallas, wrote about ice extrusions. He researched about those extrusions from objects as well as those from plants, both of which are natural occurrences, by the way.

In an article for the Illinois State University, Dr. Carter said that he first saw ice extrusions in January 2007 from the pictures sent to him, which were photographed on Vancouver Island in Canada.

Three of those pictures are the one found below:

As you can see, the metal fence has a hole – a slit – where the ice gets extruded.

(a) First, a certain amount of water somehow gets inside the steel pipe.

(b) Second, at one given night (for example only), that water starts to freeze – but not totally solidify.

(c) Third, come morning, some of those that became ice begins to melt. Now with a presence of water, those ice that didn’t melt starts to float.

(d) Fourth, come nighttime again, the temperature dips. The water freezes again and turns to ice. Science tells us that water expands when it freezes. So, during the expansion, those ice that didn’t melt during daytime and stayed in their frozen state gets pushed out through the slit/opening. Now that sounds like the Cambridge definition of “extrusion,” right?

As the ice gets extruded, it turns into an elaborate ribbon of ice as soon as it gets exposed into air. That also explains why ice extrusions are also called ice ribbons.

See how two ice extrusions from a steel fence appear in the two pictures below: 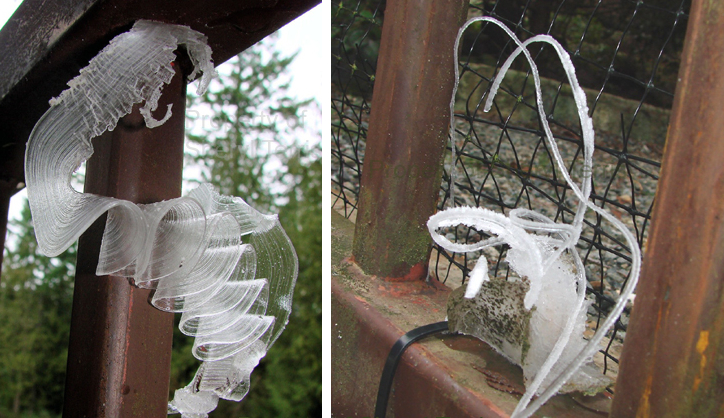 Dr. Carter noted that the temperature affects the brittleness of the ice extrusions. The colder the temperature gets, the more brittle they become, according to Gigazine. 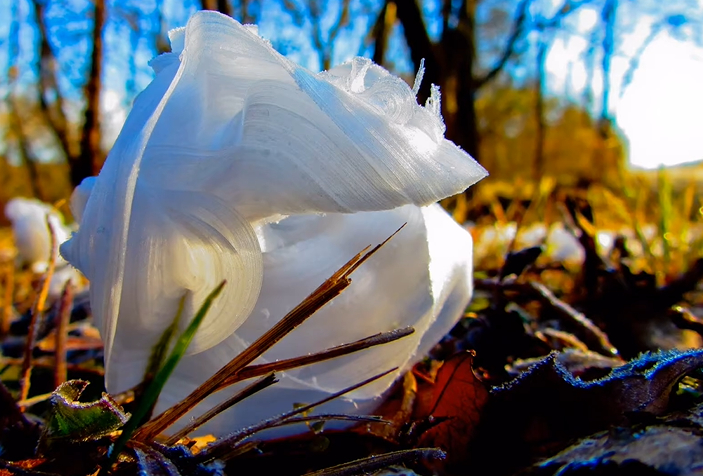 According to Wikipedia, other terms for ice flowers are:

As for the types of ice flowers (or ice extrusions in plants):

In a paper for the Journal of Geography and Earth Sciences and published in 2021, Dr. James Richard Carter clarified that the scientific community doesn’t use the term “frost flower” to refer to ice extrusions. The former has long been designated for something else.

Frost flowers are flower-shaped ice crystals that are formed during winter in sub-zero temperature (when it gets nearly -22° Celsius or -7.6° Fahrenheit), according to BeautifulNow. They grow “when the air is at least 15 degrees cooler than the ice.”

As water vapor comes out from the cracks in a frozen surface of a body of water, the air near these cracks starts to freeze. Then ice crystals begin to form vertically until they appear like a white flower in full bloom as can be seen in the picture below: 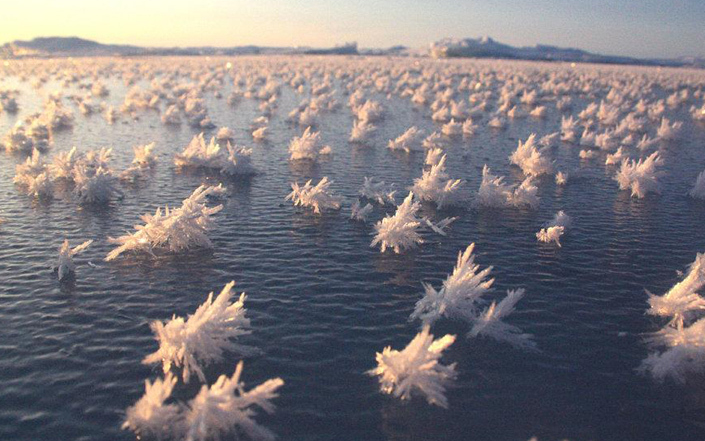 Hundreds of frost flowers floating on the Beaufort Sea near Alaska

Because the stem is exposed in cold air, the water and the sap get frozen, causing super tiny cracks to appear on the stem. They get forced out – extruded – from the stem, and once they hit the air, they transform into ice flowers. They become those spiraling, curving, dancing ribbons of ice.

In an article he wrote for American Scientist, Dr. Carter calls the process behind ice extrusions as ice segregation. 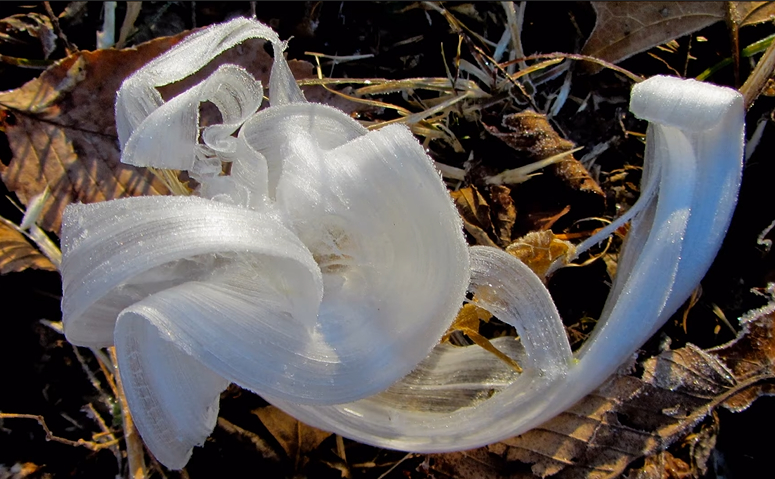 To begin with, frost flowers are not flowers at all, and, as Dr. James Richard Carter stated in American Scientist, “they do not form in the same way as frost.”

What’s definite is that they’re naturally (and intricately) formed ice – or ice extrusions.

According to Dr. Carter, there are 40 species of plants that produce ice flowers.

The most common one is the frostweed (scientific name: Verbesina virginica; other names: white crownbeard, wingstem), which belongs to the family of daisies.

Other ice flower-producing plants are the following:

Autumn/Fall is the season to look for ice extrusions in flowers.

At Run Wild My Child, a website geared towards “kid-friendly” trips and outdoor activities, Sara Lesire shared where to look for ice flowers.

“I often find them in areas that are mossy, forested, or near a creek,” wrote the Missouri-based civil engineer.

Lesire added that “a field near the edge of a wooded area” and “parks with heavy woods, mossy hills, and streams” are also ideal places to look for them.

The perfect time to search for ice extrusions, according to her, is “soon after sunrise.”

These ice extrusions have been found fascinating and intriguing at the same time since the 1800s, according to Dr. Carter.

From ice spikes – or what Ontario-based naturalist and writer Seabrooke Leckie calls as “icicles in reverse” – to ice jellyfish, it seems that nature will never cease to amaze people.

Ice jellyfish (they don’t sting!), by the way, are ice formations that look like, well, jellyfish. They were sighted on the shore of Okanagan Lake in Canada in early December 2021, reported Penticton Western News.

When it comes to ice formations, the delicate beauty of ice extrusions from fences and ice flowers is one to beat.