Iguazu Falls - The Waterfall That Is Shared Between Brazil And Argentina 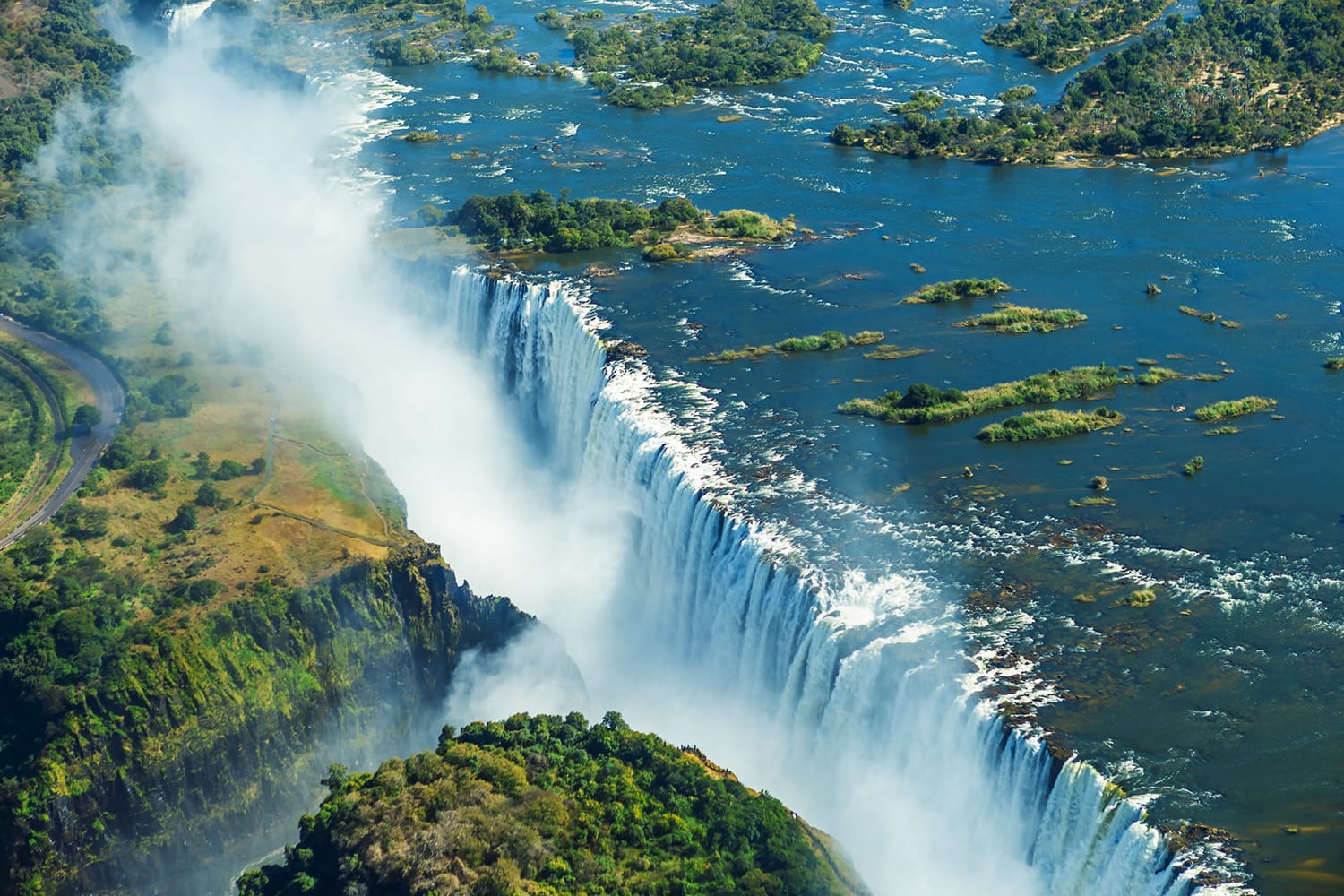 The Iguazu Falls, also known as Iguaçu Falls, are a series of waterfalls on the Iguazu River that are located on the border of the Argentine province of Misiones and the Brazilian state of Paraná.

The waterfalls are named after the indigenous people of the region, the Yguasu, and the Spanish word for them is Cataratas del Iguaz. They form the world's largest waterfall system when taken together as a whole. The Iguazu Falls divide the river into two sections: the upper and lower Iguazu Rivers. The Iguazu River begins its journey through Curitiba, Brazil, near its source.

The river flows through Brazil for the majority of its length; however, the majority of the falls are located on the Argentinean side. In Argentina and Brazil, the Iguazu River defines the border between the two countries just below its confluence with the San Antonio River.

According To A Legend

According to legend, a divinity had planned to marry a beautiful woman named Naip, who had fled with her human lover Tarobá in a boat to avoid the wedding. Angry, the deity cut the river, producing waterfalls and sending the lovers plummeting into an eternity of peril. The Spanish Conquistador lvar Nez Cabeza de Vaca was the first European to describe the existence of the falls in 1541 when he visited the area. 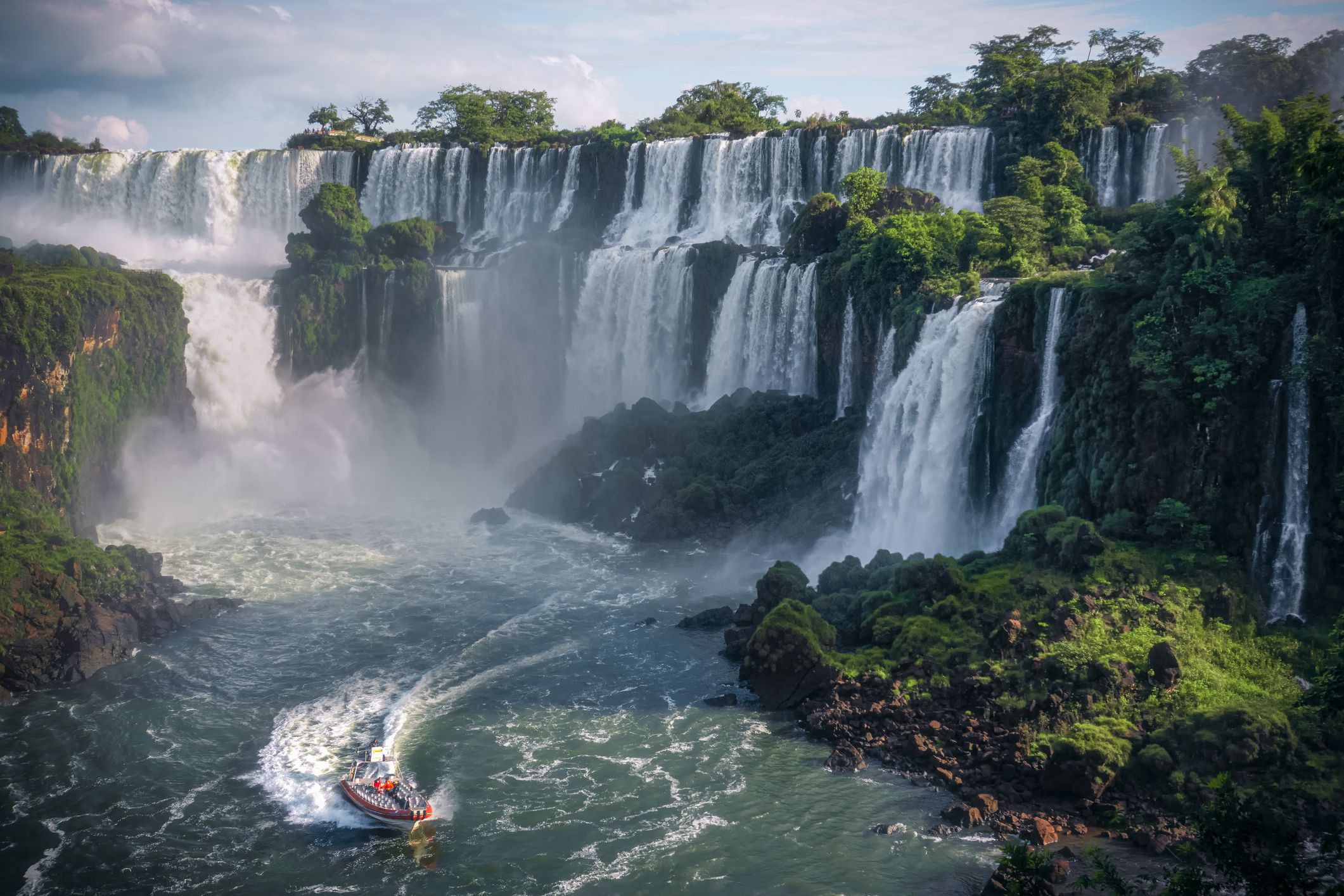 A beautiful shot of iguaza falls with a small boat

The waterfalls have a staircase-like appearance, with a two-step waterfall formed by three layers of basalt forming the staircase. The steps rise to a height of 35 and 40 meters (115 and 131 feet), respectively. The columnar basalt rock formations are part of the 1,000-metre-thick (3,300-foot) Serra Geral Formation, which is located within the Paleozoic-Mesozoic Paraná Basin and is 1,000 meters thick (3,300 feet) in thickness.

Each of these sequences is characterized by a top layer of 8–10 m (26–33 ft) of highly resistant vesicular basalt, and the contact between these layers is responsible for determining the shape of the falls. Headwater erosion rates are estimated to be between 1.4 and 2.1 cm (0.55 and 0.83 in) per year.

Numerous islands dot the 2.7-kilometer-long (1.7-mile) border of the falls, dividing them into numerous cascades and cataracts that range in height from 60 to 82 meters (197 to 269 feet) above the water. The number of these smaller waterfalls varies from 150 to 300, depending on the level of the water in the reservoir. The Devil's Throat is a deep and narrow chasm which approximately half of the river's flow is channeled through (Garganta del Diablo in Spanish or Garganta do Diabo in Portuguese).

Water does not flow through a portion of the 2.7 km (1.7 mi) length, which is approximately 900 m (2,950 ft). Itaipu Dam is located near the mouth of the lower Iguazu River, which collects water in a canyon that flows into the Paraná River, a short distance downstream. The confluence of the water flows defines the border between Brazil, Argentina, and Paraguay, as well as between the three countries.

There are several points in the cities of Foz do Iguaçu in Brazil, Puerto Iguaz in Argentina, and Ciudad del Este in Paraguay that provides access to the Iguazu River, where the borders of all three countries can be seen. The Iguazu River is a popular tourist attraction for visitors to the three cities.

What Type Of Landform Is The Iguaza Falls?

Located on the lip of the basaltic Paraná Plateau, the Serra Geral Formation, Iguazu Falls is a natural wonder. This volcanic plateau was built approximately 132 million years ago after a massive volcanic eruption during the Lower Cretaceous period. Perhaps this was the most massive volcanic explosion in the history of Earth's last several hundred million years, if not the entire universe. 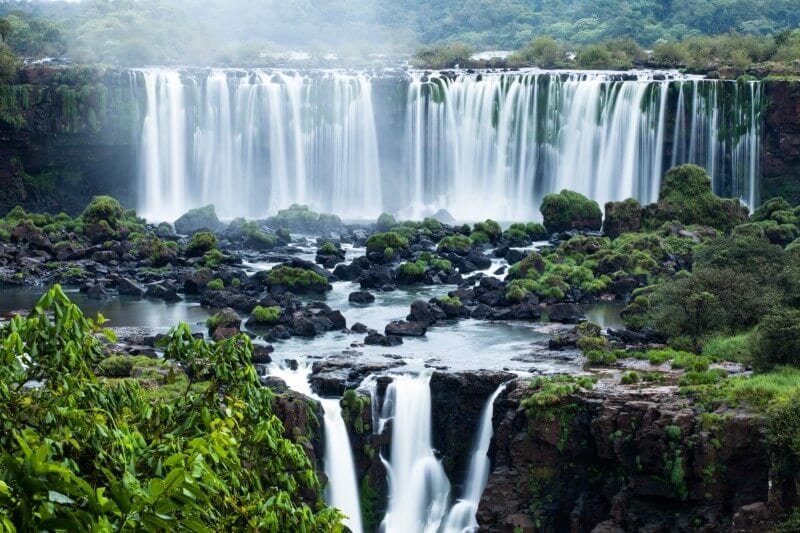 On the Brazilian side, a boardwalk along the canyon has been extended to the lower base of Devil's Throat, which is visible from the Brazilian side. Helicopter flights to the falls have previously been accessible from Brazil, but Argentina has restricted such excursions due to the negative environmental impact on the falls' flora and fauna as a result of the adverse environmental impact on the falls.

The park may be reached from the Foz do Iguaçu International Airport by taking a taxi or a bus to the park's main entrance. On both sides of the park, there is an entrance fee. Once inside, complimentary and regular shuttle buses transport visitors to various locations across the park. The town of Foz do Iguaçu is approximately 20 kilometers (12 kilometers) away, and the airport is located halfway between the park and the town of Foz.

The Rainforest Ecological Train, which transports visitors across the forest in Argentina, is strikingly similar to the one seen in Disney's Animal Kingdom.

Visitor arrival at Devil's Throat, as well as the upper and lower routes, is made possible by the railway service. Devil's Throat is the highest and deepest of the falls, and the Paseo Garganta del Diablo is a 1 km (0.6 mi) long walk that takes tourists directly over the falls. Access to the longer section of falls that crosses the forest on the Argentine side, as well as to the boats that link with San Martin Island, are provided via additional pathways. On the Argentinean side, visitors can get up and personalize with the falls by renting an inflatable boat from a company.

It is necessary to cite. There are 72-passenger double-deck buses with panoramic views available on the new transportation system.

"We spent 2 days on the Argentina side. We saw so much wildlife. Toucans, coati, monkeys, lizards, frogs, and so many mosquitos. You can tell when it rains somewhere upstream. Pretty intense the first day. Came back for a second day and holy hell the water was raging! They had to cancel all the boat adventures it was so rough. What an incredible experience."

With the goal of increasing the number of tourists to Iguaza Falls while simultaneously lowering the negative environmental impact, the Brazilian transportation system seeks to increase the average number of passengers per vehicle within the park.