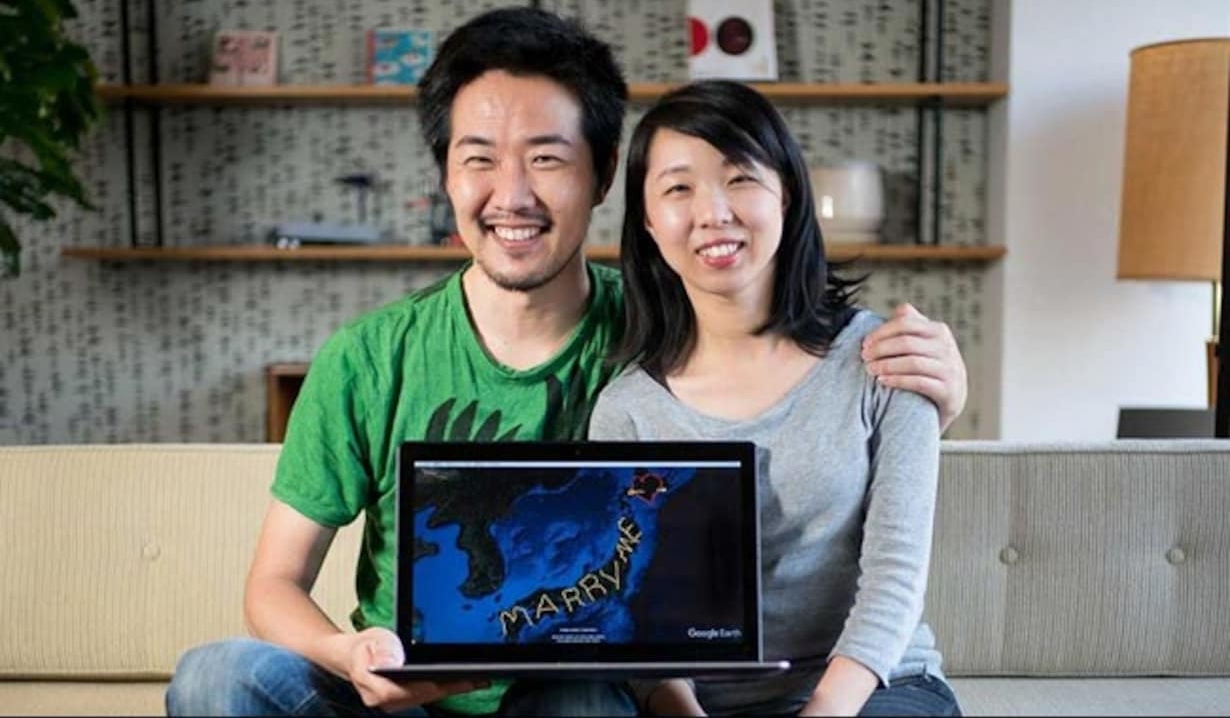 Wedding proposals are significant for a couple because they are a memory they will cherish for the rest of their lives. Yasushi "Yassan" Takahashi, a Japanese man travels 4000 miles to spell out 'Marry Me' on Google Earth.

He made the decision to make it more special for his fiancée by traveling for six months across Japan while using Google Earth to trace his trip and spell out "Marry Me" with a heart over the map of the nation.

In 2008, Yassan had the brilliant notion of using GPS art to pop the question to his love, Natsuki. So, a Japanese man travels 4000 miles to spell out 'Marry Me' on Google Earth. GPS art is, according to Google, "the process of using a GPS device to follow a pre-planned path while producing a massive digital drawing. A form develops whenever the route is submitted to a mapping application like Google Earth."

The GPS tracker is activated and set to follow you when you travel to particular destinations. You turn it off if you don't want your movements monitored because it doesn't work for the drawing you're trying to create. Once finished, you publish it online and have a work of art.

GPS art is not a coincidence. You can't just start traveling a path. It must be properly and diligently planned in advance. It is therefore a very exact art.

Takahashi traveled from the island of Hokkaido in the north of Japan to the shores of Kagoshima in the south of the country to write this message in GPS.

On his 31st birthday, he embarked on the adventure, quitting his job and setting out on a six-month journey.

Takahashi had never traveled outside of Tokyo before his GPS trip. With the help of his art, he was able to travel to a variety of new locations and spend the nights sleeping in his car.

For the sake of love, he endured all types of weather. Did his girlfriend respond positively? Obviously, she did.

Finally, he showed Natsuki his finished tour on Google Earth in possibly one of the most meticulously thought out proposals ever. In addition, Yassan's drawing helped him set a Guinness World Record for the biggest GPS sketch ever.

After his proposal plan was a success, Yassan began making GPS maps all around the world. On his website, it says, "He is a professional GPS artist with more than 1400 artworks. "I've drawn over 100,000 kilometers in 24 countries."

Who Is Yasushi Takahashi?

Yasushi Takahashi is a Japanese man who proposed to his girlfriend in a unique way by spelling out "Marry Me" on Google Maps. He got quite famous due to this.

Who Got The Best Marriage Proposal In The World?

Natsuki got the BEST proposal in the world. Google Earth was used by Yasushi Takahashi, her boyfriend, to make his engagement proposal to his fiancée, Natsuki. An extravagant marriage proposal from a Tokyo man needed six months of travel, Google Earth, GPS, and a lot of commitment.

When Did Yasuhi Takashi Propose To His Girlfriend By Spelling Out "Marry Me" On Google Earth?

Yasushi Takashi proposed to his girlfriend in 2008.

A Japanese man travels 4000 miles to spell out 'Marry Me' on Google Earth and then he proposes to his fiance Natsuki. In case you were wondering, Natsuki responded with a "Yes."