Let’s face it, we are all in one way or another obsessed with all things Tiger King and Joe Exotic right about now.

Granted, morally we probably shouldn’t be – I mean, the guy did try and get someone killed, and even though many of us aren’t Carole Baskin’s biggest fans, we can never condone attempted murder.

Exotic’s story is just fascinating and we can’t help but be enthralled by every inch of it – including his personal life aside from the zoo.

If, like me, you can’t get enough of his eccentricity, there probably isn’t anything better to do than witness than Exotic’s three-way ‘Tiger King’ wedding in all its glory.

After all, the Netflix docu-series barely touched on it.

And you can now stream it in full online. 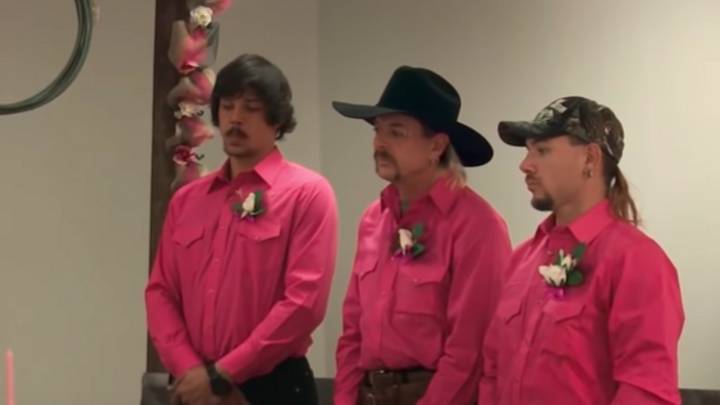 The 23-minute home video titled ‘The Wedding of Joe, John and Travis’ from back in 2014 was uploaded onto the ‘JoeExoticTV’ YouTube channel with background music from Tiger King himself.

Like many a traditional wedding video, it details the throuple’s wedding reception, including all the prep with tables and chairs and collecting the cake and shows all three of the men dressed in their shockingly bright pink shirts as they say their ‘I do’s’.

Of course, the wedding was tiger themed, even the cake featured buttercream crocodiles with chocolate riding boots and hats.

Ever one to act on a whim, Joe even invites the woman in the shop where he collected his pink shirts from to the party asking: “Are any of you off tomorrow?”, before adding: “It’s at one o’clock down at the dance hall if you want to come, it’s for a TV show and a couple of the flower girls are monkeys… it’s going to be awesome”.

And awesome it was, if somewhat unusual – with a monkey carrying the rings, a buffet of steak, beans and coleslaw and lots of laughing, joking and rubbing cake in one another’s faces.

But alas, the happiness between the trio wasn’t meant to be and things soon fell apart.

John ended up doing a runner with a female member of staff at Exotic’s zoo and in a recent interview on Lights Out with David Spade revealed that he was never legally married to Joe or Travis.

He said: “Right now I have a fiancée”.

“But just to clear the record, me and Joe were never legally married. Ever”.

“The girl I ran off with, we had a kid, we spent three years together. We never got engaged, never got married, anything like that. I will be married soon”, John added.

John went on to reveal that the three of them weren’t even that close saying: “We weren’t great friends but we were friends”.

Which is a shame, especially after witnessing all the loved-up fun in the wedding video.

Despite being behind bars, serving a 22-year stretch for the murder-for-hire, Joe is now married to Dillon Passage, who also featured in the show, and their relationship reportedly remains strong.

Fans will know, that tragically Joe’s other spouse, Travis, sadly took his own life back in 2017.

If you haven’t already sunk your teeth into it, Netflix dropped a bonus episode of Tiger King last night so you can watch this first and that later.