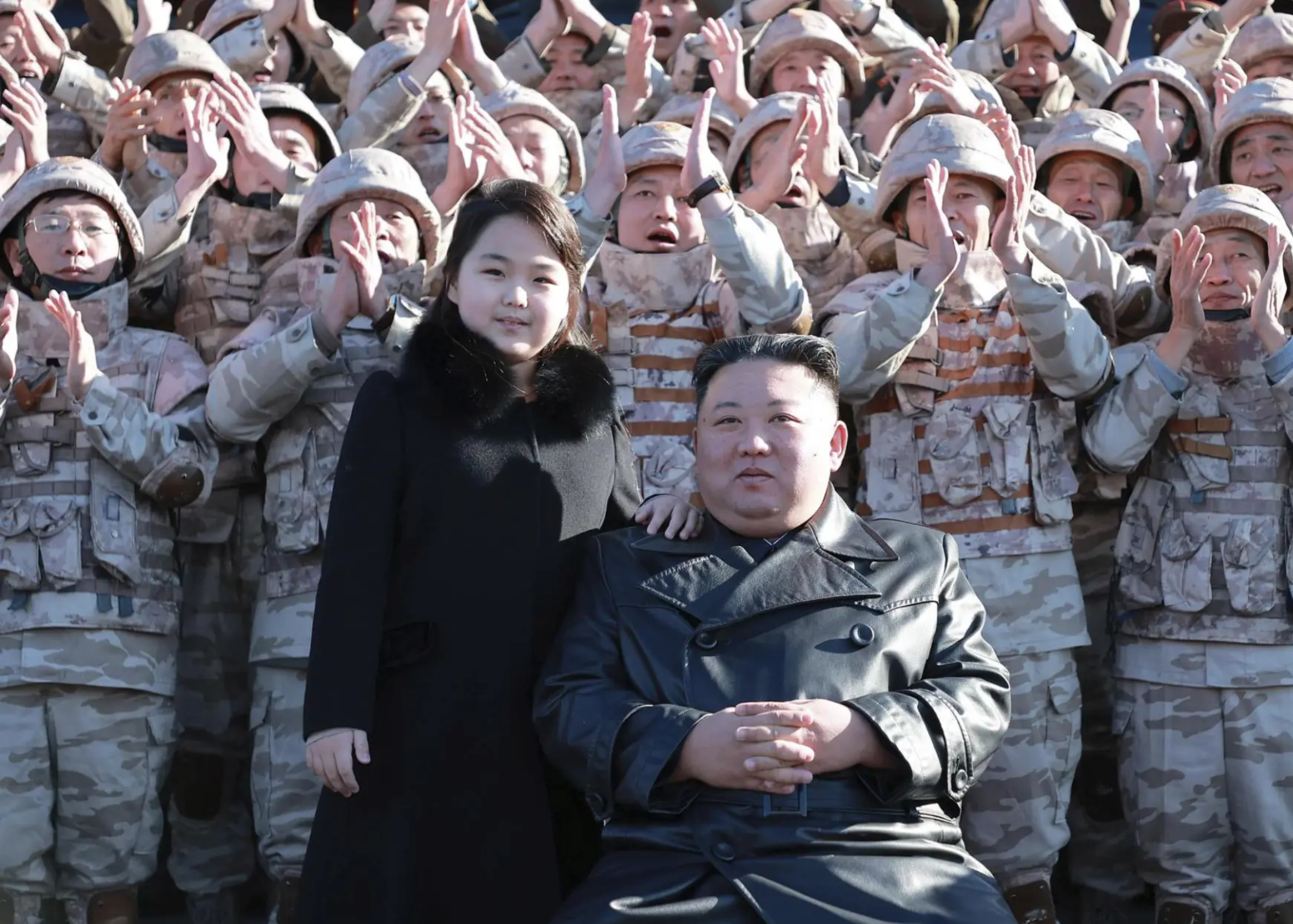 Photos released by state media on Sunday show that Kim Jong Un's daughter appeared in public for the second time at an event over the weekend. The North's official Korean Central News Agency quoted her again, saying that she and Kim posed for photos with scientists, officials, and other people involved in the launch of the Hwasong-17 intercontinental ballistic missile.

The name of Kim Jung-un's daughter in the photo is believed to be "Kim Ju-ae," and she is only about 10 years old. However, her fresh, provocative images are fueling speculation over whether she is being groomed as a potential successor.

If you recall, Kim Ju-ae was initially made public last weekend in images from state media showing her with her parents and other senior officials watching the North's intercontinental ballistic missile test the day before. The daughter was pictured walking behind Kim while sporting a white puffy coat and red shoes as they passed a massive missile put on a launch vehicle and observed a soaring weapon.

On November 19, KCNA labeled her as Kim's "most adored" or "precious" child, a more prestigious title than her earlier designation of "(Kim's) beloved" child. Photos issued by the state media showed the daughter in a long, black coat holding her father's arm as the two posed for a photograph.

Like her mother, Ri Sol Ju, who wasn't in any of the photos from Sunday, she looked more grown up than when she was first revealed a week ago. In several pictures, the two were pictured in front of a row of uniformed soldiers, facing a sizable missile mounted on a launch truck. Others displayed Kim's daughter clapping, shaking hands with a soldier, or conversing with her father as crowds applauded in the background.

This is certainly striking. The photograph of Kim Ju Ae standing alongside her father while being celebrated by technicians and scientists involved in the latest ICBM launch would support the idea that this is the start of her being positioned as a potential successor. State media underscoring her father’s love for her further underscores this, I think. Finally, both of her initial public appearances have been in the context of strategic nuclear weapons — the crown jewels of North Korea’s national defense capabilities. That doesn’t strike me as coincidental

- Ankit Panda, an expert with the Carnegie Endowment for International Peace.

How Does North Korea Maintain Its Secrecy?

The democratic People's Republic of Korea, sometimes known as North Korea, has been one of the world's most secretive nations for decades. Its government discourages foreigners from entering the nation and gathering intelligence. It shares a border with South Korea, and relations between the two countries have been strained for decades.

The conference was a significant occasion in contemporary history. More than 25 million people reside in North Korea, where the communist leadership closely regulates all aspects of daily life. Travel requires permission, and it's difficult for visitors to enter the nation as well.

All radios and televisions are set to state stations, and anyone found listening to foreign transmissions will face severe penalties. Due to these restrictions, the majority of North Koreans may be unaware of current events or how the rest of the world views their nation.

Because there is not enough food available in the nation, many people depend on humanitarian organizations like the United Nations to provide food. But those North Koreans who demand more from their government, call for a new leader, or simply attempt to flee are harshly punished and occasionally killed.According to a report by Amnesty International, hundreds of thousands of people have been imprisoned or forced to work in labor camps as a result of their disagreement with the government.

According to the National Intelligence Service, her appearance matched information indicating she is taller and bigger than other girls her age. It also said that her debut seemed to show that Kim was determined, in the middle of a crisis with the US, to protect the safety of future generations of North Koreans.

As reported by South Korean media, Kim has three children, born in 2010, 2013, and 2017, with the first being a boy and the third being a girl. The exposed daughter is almost certainly the child seen by retired NBA star Dennis Rodman during his 2013 visit to Pyongyang.