An Absolute Guide About The Stature Of Krishna's Butterball India 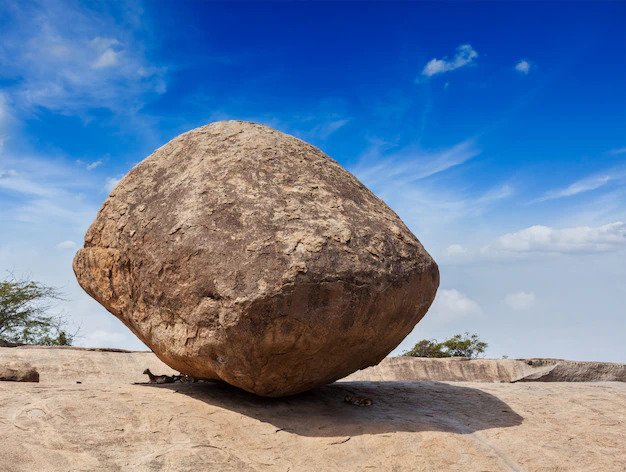 Krishna's Butterball is a 250-ton, 20-foot-tall rock boulder that sits on a slippery slope of a hill with a little more than a 4-foot base. Despite the fact that the slope is slippery, the boulder has maintained its current place for more than 2000 years. 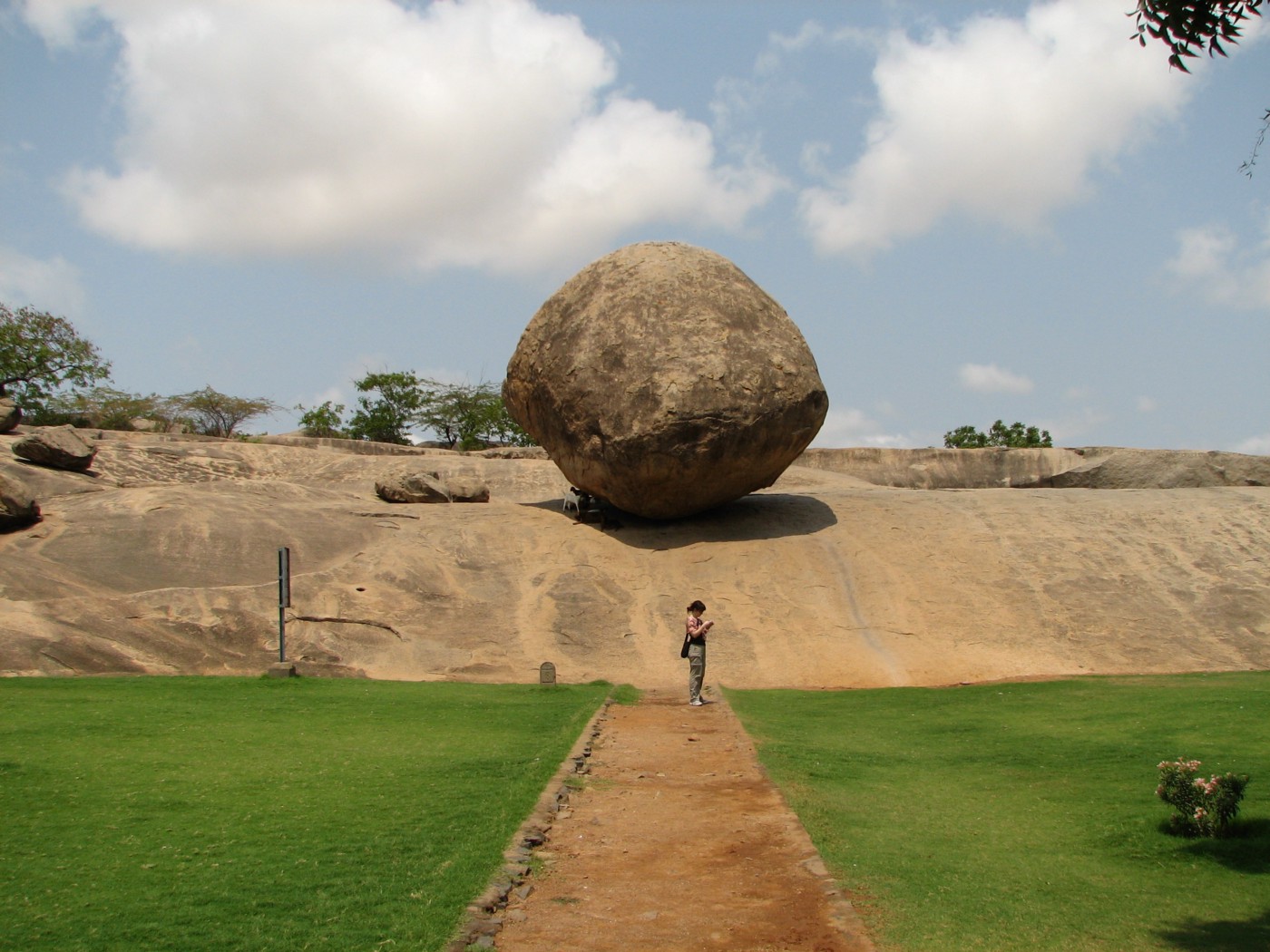 Distant shot of Krishna's Butterball near the grass land

In the Indian state of Tamil Nadu, a massive granite boulder known as Krishna's Butterball (also known as Vaan Irai Kal and Krishna's Gigantic Butterball) rests on a short incline in the historical coastal resort town of Mamallapuram.

As part of the Pallava dynasty's Hindu religious complex at Mamallapuram, which is a UNESCO World Heritage Site and was constructed during the seventh and eighth centuries CE as Hindu religious monuments, it is a popular tourist attraction in the area.

The Archeological Survey of India has designated it as a national monument that must be preserved.

No one knows what is causing the massive boulder to appear to be stuck in its descent down the hill on which it is perched. The massive rock is most likely a glacial erratic that became trapped in a fortunate location on the hill, but there is another version of the incident that is told in local tradition.

According to Hindu mythology, when the great god Krishna was a child, he had a fondness for stealing butter from his parents' kitchen. In keeping with this tradition, the large orange stone has been compared to a massive glob of stolen butter that the deity accidentally dropped.

The stone's official name is "Vaan Irai Kal," which translates to "Sky God's Stone," but according to one source, the more amusing moniker was given to the rock by a local tour guide who thought it was funny. Whatever happened to give it its somewhat ridiculous name, it stuck.

The slippery stone slope, which serves as a slide for local children, serves to reinforce the stone's unusually balanced positioning. Krishna's Butter Ball is now a renowned tourist attraction in the area. Visitors to the location are often trying to climb behind the stone and push it down the slope, which is a popular activity. Up to this point, no amount of human strength has been able to move the buttery boulder.

The best part is that the goats from the neighborhood occasionally climb on top of it. It's just cute. 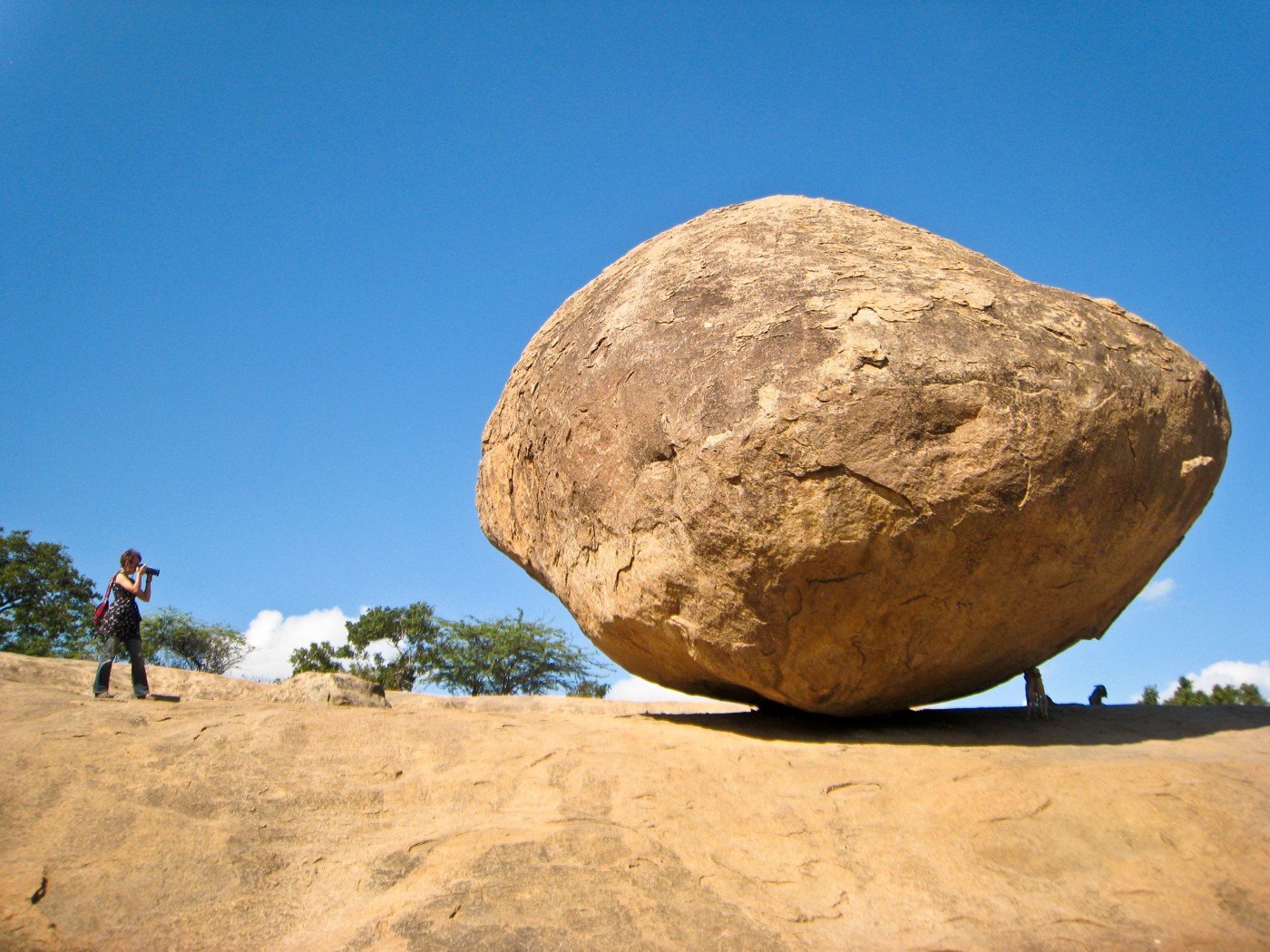 What Is Its The Origin?

Why? It's because the boulder seems like it's about to roll off a cliff and crush the entire city to powder any second, but it's been standing still for more than 1,300 years at this point.

So the locals believe that there is a divine miracle taking place inside the Boulder that is causing it to remain steady.

According to local legend, the Mahabalipuram stone (Krishna's Butterball) has a long and illustrious history.

According to Hindu tradition, Lord Krishna as a child had a strong affection for butter, and a bolus of stolen butter fell here and formed a massive orange clump of butter.

In Hindi, this explains why Krishna's second name is 'Makhan Chor', which means 'butter thief'.

It is also claimed that the rock was placed in that unusual location by the God of the sky in order to demonstrate his power. As a result, the stone was given the name "Stone of Sky God."

“Humans aren’t dumb. They must have tried moving the rock. Didn’t they?” you ask, and I understand.

“Humans are curious creatures. They can’t stay at peace when nature mocks them with seemingly impossible feats.”

Failed Experiments In Attempting To Move The Rock

At a time when technology was still in its infancy, humans were just as enthusiastic about moving the rock as they were. Many rulers had tried unsuccessfully to move the rock, which demonstrated the boulder's total sturdiness.

Inscribed on a stone in the 7th century AD by King Narasimhavarman:

King Narasimhavarman's inscription on a stone from the 7th century AD. Inscription on the wall of King Narasimhavarman was a significant ruler in the Pallava dynasty who believed that the rock had descended from heaven and did not want sculptors to come close to the structure. He directed his soldiers to remove it from its current location. He utilized every piece of equipment he could get his hands on, but it was all in vain.

The year 1908 – It was unable to move despite the efforts of seven massive elephants:

While the rock appears to roll over when an ant leans on it, it is actually so firmly planted that the combined strength of seven elephants was unable to move it even an inch further!

When India was still under British administration in 1908, the governor of Madras, Sir Arthur Lawley, made the decision to remove the boulder from its original location in order to ensure the safety of the inhabited town beneath it. He ordered seven elephants to complete the task. Despite all of the efforts of the giant beasts and his troops, the rock remained immovably immobile.

Lawley was not a failure in his endeavors. At the very least, he ensured that the rock would not be easily moved by natural forces and that there would be no danger to the people and their homes.

This raises the question of whether the boulder is genuinely balancing or if it is strongly fastened to the surface by the surrounding rocks.

It provides shade for goats, and a tourist woman sits directly beneath it. That is the level of credibility established by the rock.

The rock quickly gained popularity as a tourist attraction.

The rock is regarded to be a UNESCO World Heritage Site since it is a member of the 'Group of Monuments at Mahabalipuram', which is a collection of monuments in Mahabalipuram. It is also protected as a national monument by the American Society of Industrialists (ASI) (Archaeological Survey of India).

It is a typical photography practice among tourists to place their hands under the stone when posing for photographs, giving the impression that they are holding it!

A toy that was inspired by the shape of a rock Raja Raja Chola(who governed South India and the Indian Ocean from 985 to 1014 AD) was strongly influenced by the balance of the huge stone, which he erected in his palace in 985.

After his death, Thanjavur Bommai (also known as the Roly-poly toy) was developed, which is a doll with a semi-spherical base that returns to its original position every time someone pulls it back up again. The simple science behind it is as follows:

The symbol represents the doll's center of mass (COM). The COM moves ahead or behind the base point of the doll when you move it aside, creating a torque that pulls it in the other direction, allowing it to stand up straight again when you move it back.

The rocking horse and the rocking chair both operate on the same premise as well.

"I still wouldn’t stand under it."

"Me neither. My luck it would decide it wants to finally roll." 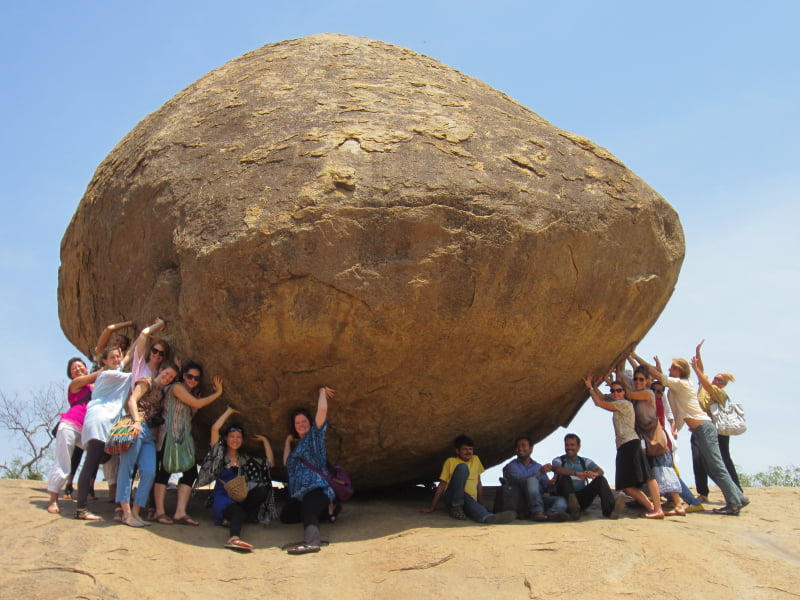 A crowd of people around giant Krishna's Butterball posing

Why Is It Called Krishna's Butterball?

According to Hindu scriptures, Lord Krishna was known to steal butter from his mother's butter handi, which may have resulted in the boulder's being given this name. In 1969, a tour guide is said to have attributed the restaurant's current name, Krishna's Butterball, to Indira Gandhi, who was visiting the city at the time.

The buttery boulder stands erect on a sloppy surface, proudly displaying its amazing structure and shattering our preconceived notions of what it is. Krishna's Butterball makes it quite evident that our grasp of both history and science is insufficiently developed.