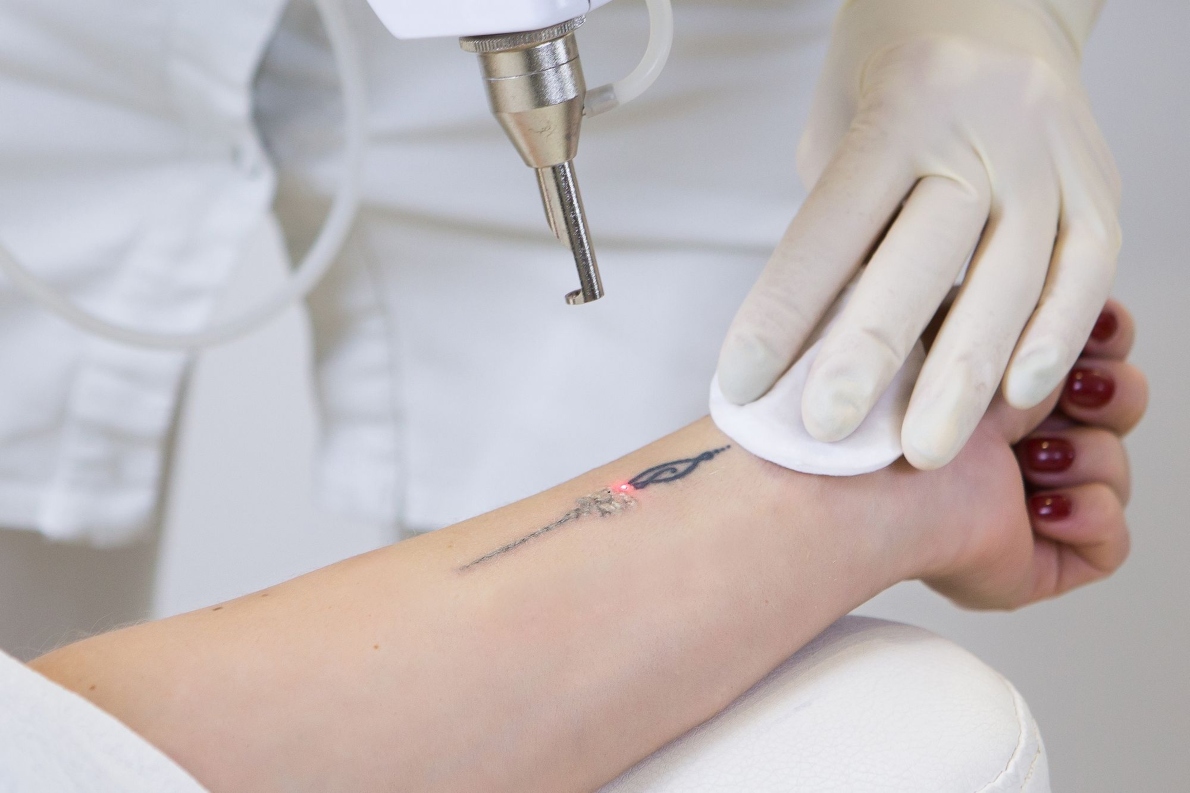 Up to 25% of people who have tattoos express regret over getting them. The good news is that if you are one of the lucky 25%, this laser tattoo removal treatment can make your unwanted tattoo look a lot less noticeable, with few negative side effects.

Tattoo removal with a laser is a common way to improve your appearance because it is safe, works well, and only takes a few minutes.

You will get an explanation of how laser tattoo removal works in the below section.

Have you ever seen an ancient tattoo that has faded to a certain extent over the years?

Tattoos will fade naturally over time because the body's immune system sees tattoo ink as a foreign substance and tries to get rid of the ink particles.

By smashing tattoo ink into smaller pieces that are easier to flush away, laser tattoo removal speeds up the natural process that would otherwise take longer. 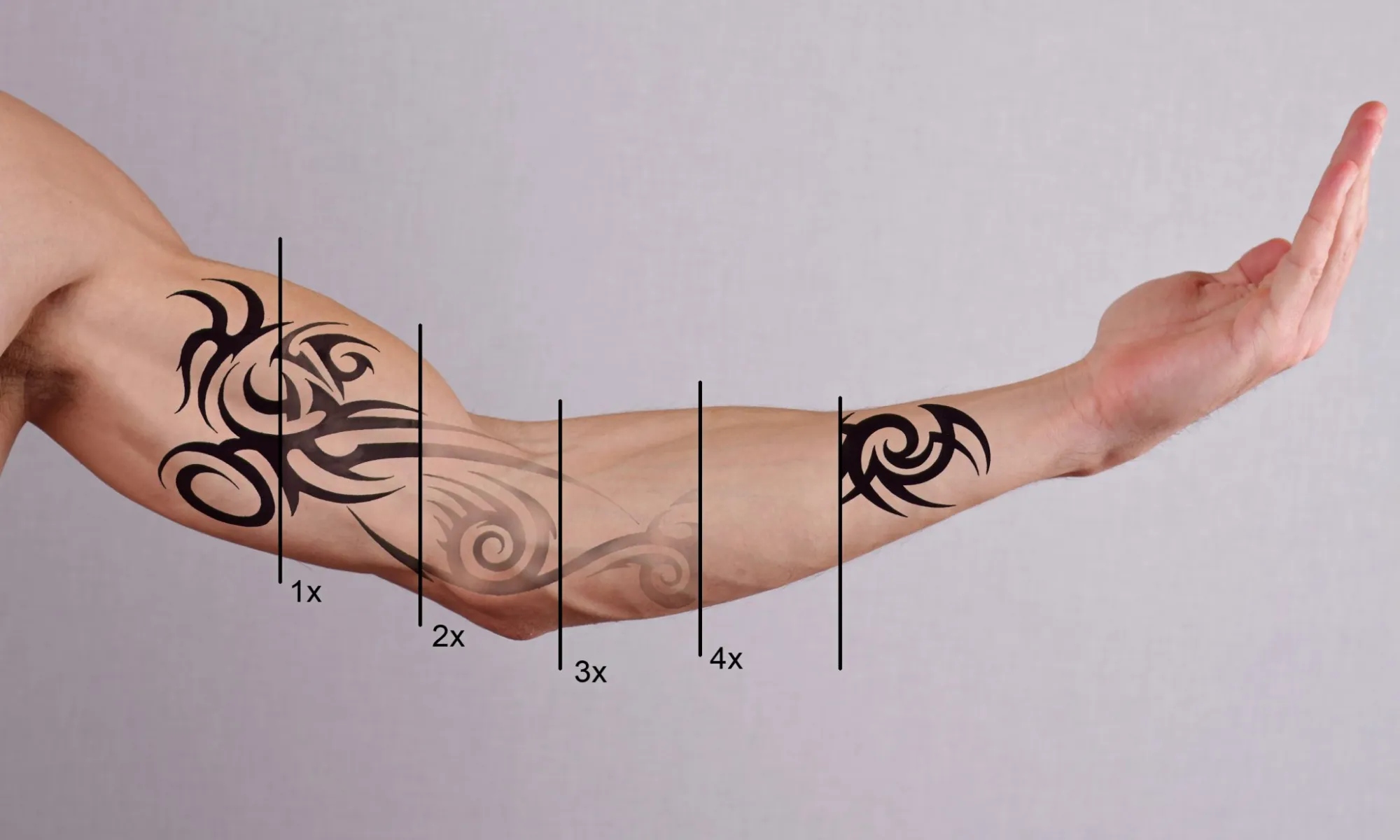 The difficult-to-remove light blue and green pigments, on the other hand, would benefit the most from the alexandrite or ruby (755 nm & 694 nm) lasers.

How Does It Work?

Since black tattoo pigment is able to absorb all wavelengths of laser light, this makes it the most forgiving color to treat.

Other colors can only be handled with certain lasers since the pigment color determines which lasers can be used.

You should start by setting up a meeting with a qualified specialist who can look at your tattoo and give you advice about how to do the procedure.

The number of treatments you require will be determined by the age of your tattoo, its size, and the color(s) it contains.

The removal method will be different depending not just on the color of your skin but also on the depth to which the tattoo pigment extends.

In general, you can expect the following to happen during a laser tattoo removal session:

Although laser tattoo removal is painful, most individuals don't require an anesthetic. Depending on where your tattoo is, you might want to use a lotion that makes the skin numb first. 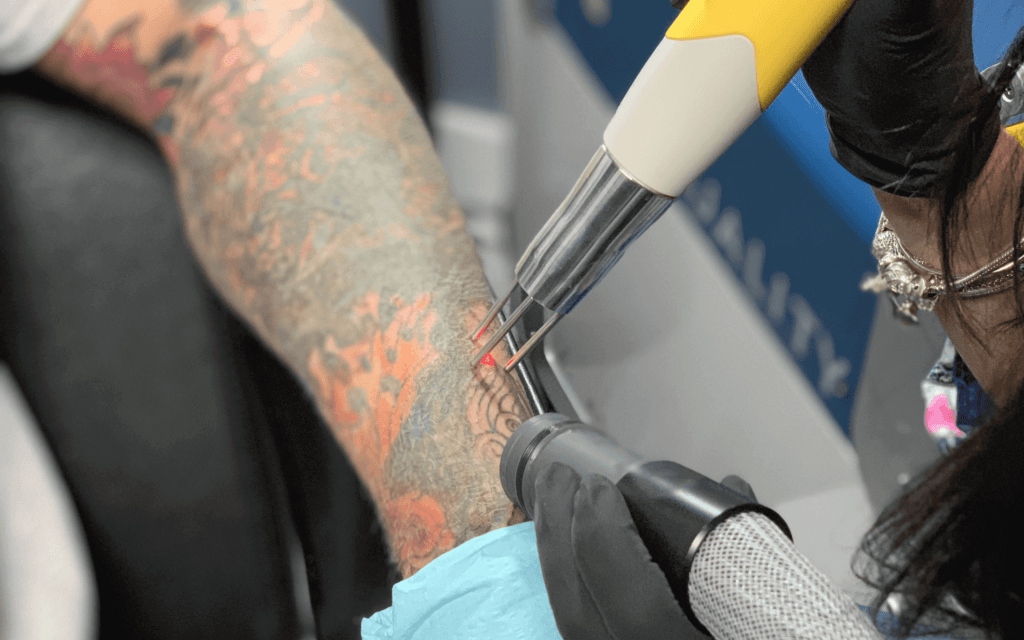 A specialist removing tattoo from the arm using laser machine

Use an ice pack to calm the affected area right away after the therapy. Additionally, bandage it for protection and apply an antibiotic cream or ointment.

When you're outside, you should also make sure it's protected by sunscreen.

Because laser treatment only affects the pigment in the tattoo, it is generally thought to be safer than a wide range of other ways to get rid of tattoos.

Some examples of these methods include excision, dermabrasion, and salabrasion. In addition, there are hardly any adverse effects.

However, you should take into consideration the following aspects before making your choice.

The location where you had your tattoo removed is prone to infection. Also, there is a small chance that the wound will leave a scar that won't go away.

It is highly unlikely that your tattoo can be eliminated in its entirety.

Laser treatment is particularly effective for removing blue and black tattoos, for example.

You run the risk of developing hypopigmentation, which is a condition in which the treated skin is noticeably lighter than the skin around it.

You could also have a condition called hyperpigmentation, in which the affected areas of skin get much darker than the skin around them.

After treatment, it is possible for cosmetic tattoos such as lip liner, eyeliner, and eyebrows to become even more prominent.

They do, however, have a propensity to become less noticeable over time. 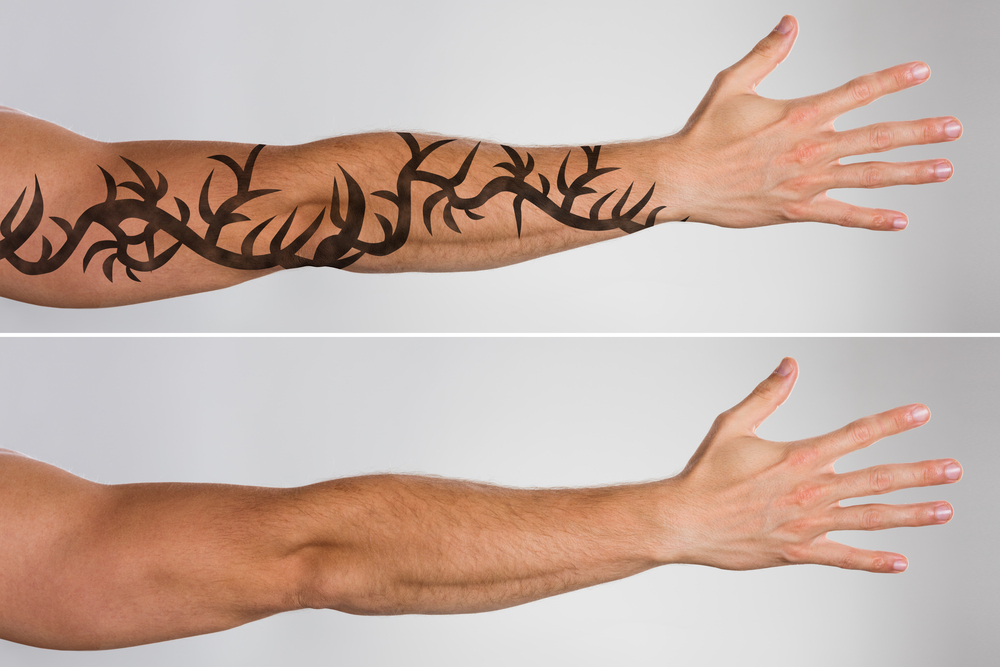 A man's arm with tattoo and without tattoo

The cost of having a tattoo removed by the laser will depend on a number of different considerations.

These aspects include the required number of sessions, as well as size, color, and location considerations.

However, the cost of removal for a tiny tattoo ranges from $100 to $250 per session on average.

Find a reputed dermatologist or cosmetic surgery center so that you can be certain you will receive the treatment and care you need.

If at all possible, your primary care doctor should be able to send you to a dermatologist or skin surgery clinic in your area that specializes in getting rid of tattoos.

Because tattoo removal is, for the most part, a matter of personal choice, the vast majority of insurance companies will not pay for the procedure unless it is absolutely necessary for medical reasons.

Tattoo removal services provided by physicians or surgery centers may also require full payment to be made on the same day as the treatment.

If you are thinking about getting a tattoo removed, you should make sure that you discuss the associated fees right away and get all of the charges written down before you get any treatment.

Reddit user doozydog shared his experience of tattoo removal, " I have a massive one on my back and have had 12 sessions to remove it. It’s a mix of a rubber band a a cat kneading you and a bee sting all at once. But lasts about 1 min"

Another shared how much time tattoos take to completely disappear, "it will lighten up in the few weeks after a session. one has to go back for multiple sessions to get the tattoo fully removed. there’s no scar look - that white outline only lasts a few minutes after the actual lasering, it occurs due to steam rising under your skin due to the lasers heat."

Reddit user inthegravy explained the process, "It’s incredible it does disappear and skin returns to normal. The laser breaks the pigment up into pieces small enough for your body to automatically dispose of. It’s only medium-level painful unless on very sensitive areas (eg upper lip)."

Can You Completely Remove A Tattoo With Laser?

Yes, you can. Lasers are able to totally remove tattoos. As a matter of fact, lasers are the method that is both the safest and most effective when it comes to removing undesired tattoos. On the other hand, it is possible that you will require multiple treatments in order to entirely get rid of the tattoo.

Relax, because even though getting a laser tattoo removed can hurt, it probably won't hurt as much as getting the tattoo did in the first place. The pain associated with tattoo removal is analogous to that of severe sunburn, and the laser pulses have the sensation of a rubber band breaking on the patient's skin. Cringeworthy, to be sure, but bearable all the same.

What Are The Side Effects Of Laser Tattoo Removal?

Pain, blistering, crusting, and pinpoint bleeding are all symptoms of acute complications that may occur during laser tattoo removal treatment.

If you want your tattoo ink to be fully removed, it's important to be aware that the skin that is left behind might not be pristine.

Your skin pigment can be lightened, even though the hazards are not nearly as great when you receive laser tattoo removal treatment from a removal specialist or medical professional.

This is still another justification to go to a skilled doctor or specialist, which is also mentioned above.