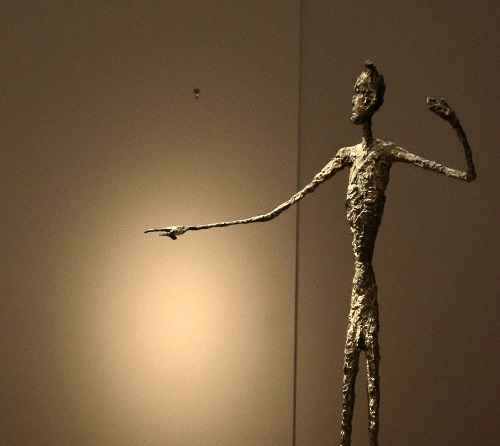 When it was sold for US$141.3 million on May 11, 2015, the sculpture L'Homme au doigt Pointing Man Statue by Alberto Giacometti became the most expensive sculpture ever sold at an auction. Giacometti created six casts of the work, as well as one artist's proof, for the piece. 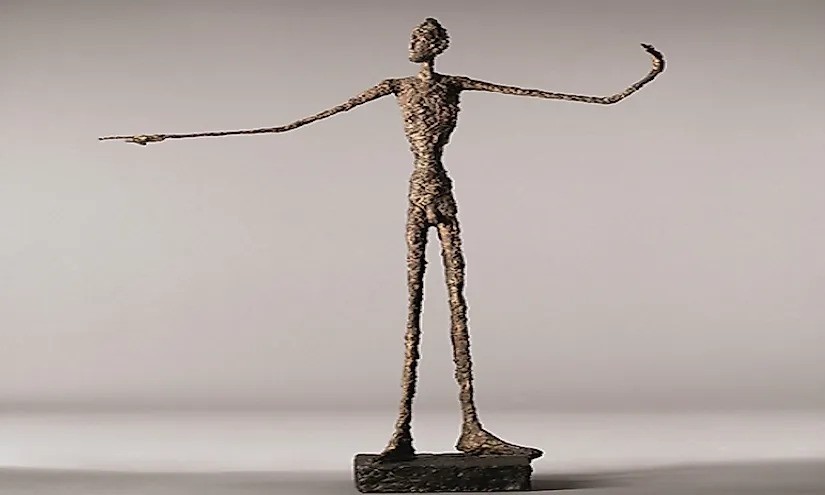 L'homme au doigt (Pointing Man), Alberto Giacometti's most recognizable and evocative sculpture, will make its maiden appearance at auction on May 11th, as a centerpiece of Christie's evening sale in New York. The sculpture is expected to fetch over $100 million. This dynamic and muscular figure, cast in bronze and standing whippet-thin at five feet ten inches, is widely regarded as one of the most significant sculptural works of the Modern era, created by the greatest master of the craft.

It will be a featured lot in the curated sale, Looking Forward to the Past, which will include pieces from the Impressionist, Modern, Post-War and Contemporary periods as well as works from the Impressionist and Modern movements. Because of the rarity and significance of this exceptional work of art, it is estimated to be worth between $130 million and $140 million dollars. 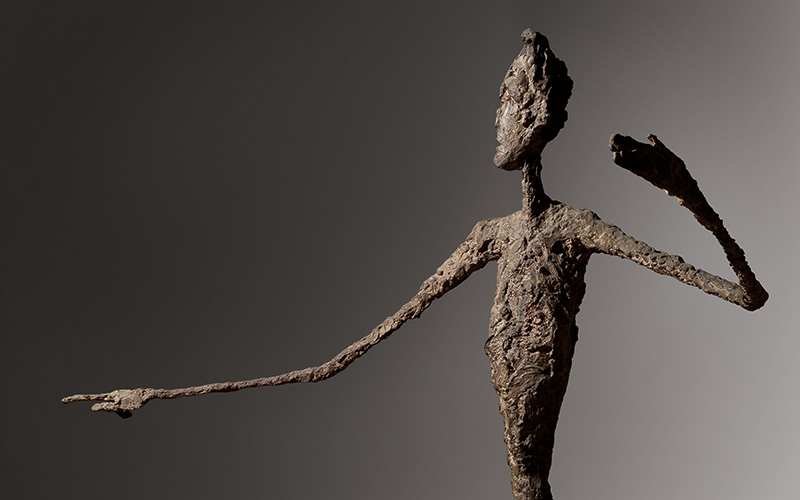 A close up shot of bronze pointing man statue

Currently, four of them are in major museums, with the remaining two being in foundation collections or private collections. Pointing Man is extremely rare, and the cast being offered at Christie's is believed to be the only bronze version of the work that Giacometti painted by hand in order to heighten its expressive impact, making this an exceptional opportunity for the world's leading collectors to view and compete for this exceptional work.

The work is expected to sell for over $1 million at the auction. A statement from Jussi Pylkkanen, global president of Christie's, states that 'Pointing Man is without question the best sculpture by Giacometti." In a single tremendous night of creative fervor following World War II, this heroic individual beckons mankind to a brighter future beyond our narrow horizons.' L'homme au doigt, a 1947 work by Alberto Giacometti (1901-1966). 'A Giacometti 6/6' is signed and numbered on the back.

"Alexis Rudier Fondeur Paris" foundry mark is inscribed on the back of the piece. Artwork in bronze with patination and hand-painting done by the artist 69 7/8 inches in height (177.5 cm.) The Estate of Alberto Giacometti (Fondation Giacometti, Paris, and ADAGP, Paris) is represented in the United Kingdom by ACS and DACS, London, since 2015. New York, New York: Alberto Giacometti Estate, licensed by VAGA and ARS, 2015.

The artist himself claims that he completed 'L'homme au doigt in one night during the month of October 1947. In January of the following year, he was scheduled to launch his first solo exhibition in nearly 15 years at Pierre Matisse's gallery in New York, but he was running out of time. In the midst of an unprecedented year of work, he had begun to transform his miniature 'pin people' into life-size figures that exhibited his famously attenuated, wraith-like style, and he was nearing the end of that year.

On this particular night, the sculptor's impending deadline propelled him to new heights of inventiveness and bravery, which culminated in the wee hours of the morning when his prototype was completed. In an interview with his biographer James Lord, Giacometti admitted that he worked on the piece between midnight and nine o'clock the next morning.

‘That is, I’d already done it, but I demolished it and did it all over again because the men from the foundry were coming to take it away. And when they got here, the plaster was still wet.’

The exhibition became an instant sensation, presenting his radically new style and body of work to New York's post-war art scene for the first time in decades. This cast of L'homme au doigt comes to market with a decidedly American provenance, having been purchased directly from Pierre Matisse in 1953 and displayed at the Museum of Modern Art. Original owners were Dr. Fred and Florence Olsen, renowned art and object collectors who collected everything from Chinese and pre-Columbian art and artifacts to Abstract Expressionism.

Additionally, the Olsens were the first owners of Jackson Pollock's famous masterpiece Blue Poles (1952), and the two great modernist masterpieces shared a prominent position in the couple's custom-built Connecticut home, which is still known as The Olsen House, which they commissioned from the architect, painter, and sculptor Tony Smith and is still known today as The Olsen House. By 1970, the work had been transferred to the collection of the current owner, a famous private collector who has held onto it for the past forty-five years.

People have a conspiracy side about this designed sculpture piece on Reddit.

"*Most money ever laundered through a sculpture"

"Just watched the Lost Leonardo the other day and I had no idea how shady fine art collecting is. Even brokers scam their clients. No wonder the CIA and FBI have investigators dedicated to this sector."

Where Is The Pointing Man Sculpture?

The painting L'homme Au Doigt pointing man statue is among the great masterpieces in the collections of the Museum of Modern Art in New York and the Tate Gallery in London. Since Giacometti's conception of the work in 1947, he has produced just six casts of it, as well as one artist's proof.

Giacometti's sculptures, including L'homme Au Doigt pointing man statue, are the only ones to have sold for more than $100 million at auction, and his work is the only one to have done so. In the last five years alone, four Giacometti bronzes have sold for more than $50 million, including Walking Man, which currently holds the world record for any work by the artist at $103.9 million, and Grand Tête Mince, from the Brody Collection, which outperformed its pre-sale estimate of $25-30 million to achieve $53.2 million at Christie's New York.