The cast of Lord of the Rings reunited over a Zoom call to reenact a classic scene, with the event being hosted by decidedly non-LOTR actor, Josh Gad.

To the actor’s credit, he has been getting various celebrities together during his Reunited Apart series and has been doing some great work in the process. He may have peaked with this one though…

Much of the Lord of the Rings cast reunited for his video, and by watching it, you’ll be able to see Elijah Wood, Sean Astin, Billy Boyd, Dominic Monaghan and Orlando Bloom, as well as the outstandingly brilliant Ian McKellen. 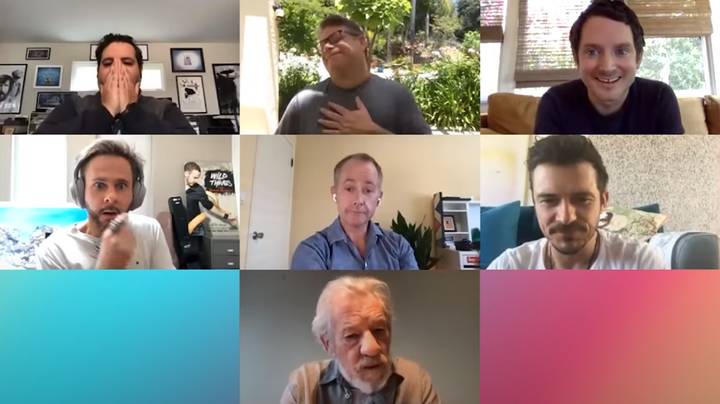 The video is mostly rounding up the fellowship at first, with Gad goading cast members into taking part in a Lord of the Rings reunion, and eventually the ball starts rolling and before you know it, he’s joined by four hobbits, an elf and a wizard.

The brief clip is more or less a teaser for a much longer video, but that doesn’t mean that we don’t get to see a pretty amazing sequence, albeit one that’s slightly jarring as Frodo has an American accent.

What’s remarkable is that Ian McKellen is the breed of person who can literally say whatever he wants however he wants to say it and it just seems like amazing acting. He just blows you away every time he speaks.

An absolutely magnificent actor and person, really, and I loved the reveal of the red wine towards the end.

Of course, the scene being reenacted was this one from The Fellowship – rather fittingly – and shows Frodo detaching himself from the rest of the group after the attack of the Uruk-hai…

Interestingly, I seem to remember watching a behind-the-scenes video from that scene, and I believe when Sam runs into the river, Sean Astin actually stepped on a huge shard of glass and cut his foot up pretty badly.

Well whaddayaknow?! I was right.

Old Elijah Wood doesn’t seem to be helping very much towards the end there. I guess it was a lot of blood.