Lost Luggage Chaos At Heathrow Airport UK Due To Malfunction 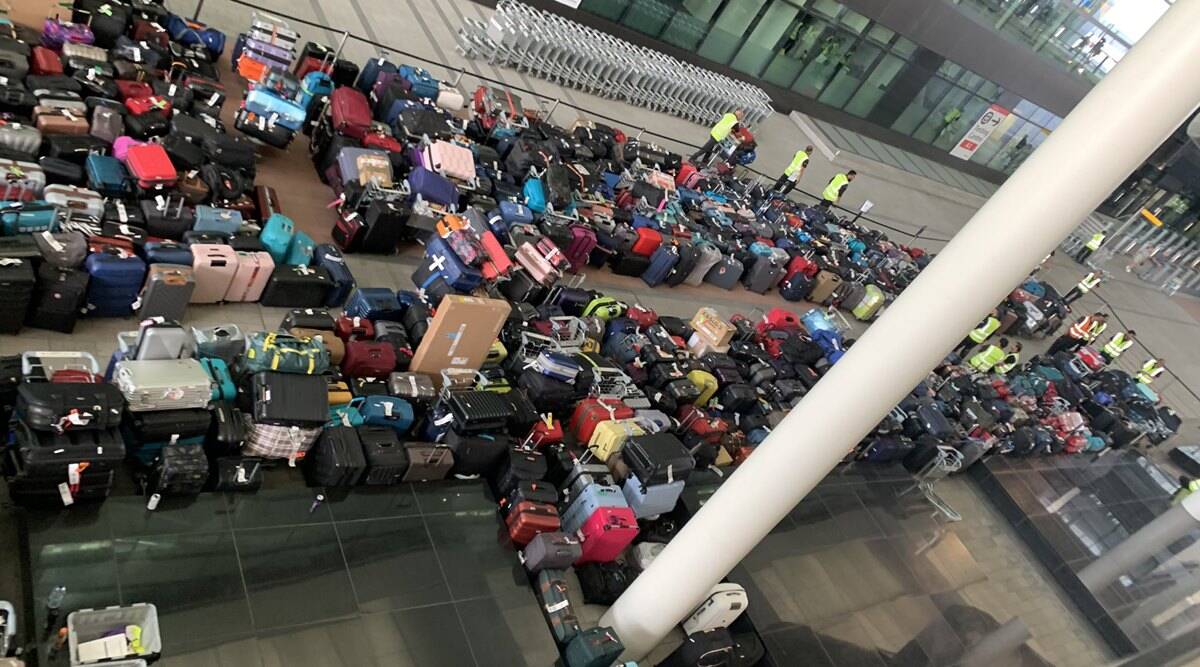 Images depicting hundreds of abandoned lost luggage chaos at Heathrow airport UK due to malfunction provide a visual representation of the pressure that airports continue to face.

As the aviation industry continues to struggle, there is a significant risk of disruption for passengers using the busiest airport in the United Kingdom to travel outside of the country.

A "malfunction" in the baggage system at Heathrow's Terminal 2 has caused thousands of departing passengers to become separated from their luggage.

These passengers were on their way to destinations outside of the United Kingdom.

A spokeswoman for the airport stated that lost luggage chaos at Heathrow airport due to malfunction had been rectified, although it was necessary for some passengers to leave without their luggage.

This complication is the most current in a string of issues that have arisen in airports across the country in some weeks and months after the pandemic and lockdown.

The lifting of many of the travel restrictions that had been imposed as a result of the coronavirus pandemic has led to an increase in demand.

The half-term school holiday and the four-day Bank Holiday weekend for the Queen's Platinum Jubilee both contributed to a worsening of the situation across the country.

Both holidays were held in celebration of the Queen's Platinum Jubilee.

Several vacationers voiced their dissatisfaction and frustration they had when attempting to embark on an excursion to a foreign country.

The following was stated by a spokeswoman for Heathrow Airport.

"Yesterday there was a technical issue with the Terminal 2 baggage system which has now been resolved.

"Passengers are now able to check-in as normal, but a number of passengers who departed from Terminal 2 yesterday may have traveled without their luggage.

"We are working closely with airlines to reunite passengers with their luggage as soon as possible. We’re sorry there’s been disruption to passenger journeys.”

According to the Mirror, the event was seen on camera by Deborah Haynes, a defense and security correspondent for Sky News, as she exited Heathrow's Terminal 2 following her arrival from Brussels in the early evening.

She stated, "The warning signs that all was not well were clear at baggage claim. There were clusters of suitcases without owners grouped around various conveyor belts."

This comes at a time when the aviation industry is experiencing a severe staffing shortage due to the fact that thousands of individuals had to be let go during the coronavirus outbreak.

Nicole Venglovicova, age 31, is anxious that she will not be able to get a refund of the nearly 500 pounds that she has spent attempting to straighten out her air travel arrangements after missing three consecutive flights to Belfast from Heathrow.

She explained, "I had a meltdown, I was crying outside the airport out of stress."

Ms. Venglovicova, a London-based independent video producer, said the following to the reporters, "I arrived at the airport for my morning flight and Flybe told me the queue is huge so I need to run.

"When I finally got to security, my boarding pass didn't work... the gate was still open at this point."

While Ms. Venglovicova was returning to the front desk to explain the problems she was having with her boarding permit, the personnel "began arguing with security."

She was finally able to make it back to her gate just as it was closing, but no one was there to greet her.

"The problem I had was that they should have told me that I will miss my flight because of the queue and I would (have) immediately booked a later flight to go on. But instead they send me (back) to security check and make me miss my flight and I had to go through arrivals and look for my luggage which they didn't even put onto the airplane."

Ms. Venglovicova had to wait an additional two hours to retrieve her luggage and go back through security, which resulted in her missing two additional flights to Belfast that she could have taken if she had arrived earlier.

"I thought I (could get the) afternoon one and then I saw that the queue is going all the way outside to the car park and I couldn't see the end of it," she said.

"Then I had a meltdown and just went home. There is no point. Domestic flight to Belfast and I need to go to the airport when? Eight hours earlier?"

A Reddit user helpnxt explained this, "Btw it's not lost luggage but the delay in getting luggage to the belts and the passengers due to being short staffed.

"Here is a comment in a r/london post on it explaining how luggage was being left on the belts for hours on end. Why are they so short staffed? Basically they got rid of a bunch of staff during covid and now haven't been able to hire/train/get clearance for new staff to keep up with demand and the CEO of Gatwick reckons these problems will be around for 18 months."

How Many Bags Are Lost At Heathrow?

In the period between 2016 and 2020, lost luggage claims were filed the most frequently at London Heathrow Airport, accounting for 42.75 percent of all unresolved claims. In 2020, the airport processed a total of 22.1 million passengers.

What Happens If Your Luggage Gets Lost At The Airport?

Proceed without delay to the customer service counter of the airline and explain the problem there. In order to determine where your bag is, the airline employee will most likely ask you for identification and the information that is on your baggage claim tag. They will also pull up your flight schedule.

Do Airports Compensate For Lost Luggage?

If a passenger's luggage is damaged, delayed, or lost in transit, the airline is required to reimburse the passenger in accordance with the requirements of the DOT (for domestic travel) and international treaties (for international travel).

What was your reaction when you heard about the lost luggage chaos at Heathrow airport due to malfunction?

Have you heard about the news of a fake Fb girlfriend who hoaxed a guy of rs 4.5 Million proves to be a man?