We’ve all taken something from a shop when we shouldn’t have, whether it be on purpose or by mistake (I once spent the entire day looking over my shoulder after I accidentally walked out of the Tesco in Egham with a packet of Fruit Gums I didn’t pay for), but we never play it as cool as this guy… 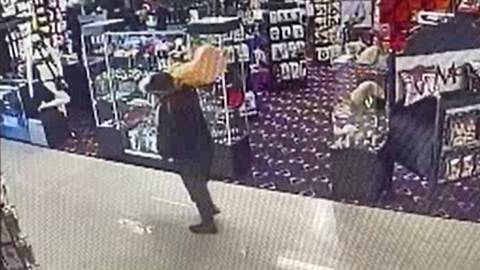 There’s something to be said for using confidence and tactical know-how to get what you want – like those guys who sneak into stadiums and gigs by wearing high-vis jackets and carrying a ladder – and the ‘act like you own it’ method of taking things nary fails you.

Going down on the 14 July, the moment was caught on CCTV at Deja Vu Love Boutique in Vegas, where the giant dick (called Moby and apparently worth $2000) was picked up and thrown over the man’s shoulder, followed by him brazenly walking off.

Now obviously it sounds like I’m commending the work of this man, but it’s worth mentioning that what he did is most certainly a crime and those who work at the shop are very upset.

“Sadly, the pandemic has encouraged even the scummiest of scumbags to steal the strangest products from innocent businesses.

“This landmark item in our store is worth nearly $2,000, so if you happen to see a 3-foot penis sitting around, please turn in the 6-foot tall dick who stole it“.

That’s the moral of this story.