A record-breaking pizza has been made, topped with 257 different cheeses. Make no mistake, that’s quite a lot of cheese.

I’m always slightly dubious of people who don’t like cheese. There really is nothing not to like and even if you can’t get on with one type, there’s at least 256 other sorts that you might like.

The blanket statement “I don’t like cheese” upsets me, but even with that said, I’m not sure how I feel about 257 cheeses being whacked on top of a pizza. I’ve said it before and I’ll say it again; that’s quite a lot of cheese.

The man responsible is a restaurateur in France, who fully intended to break the world record with his piz.

Benedict Bruel, the manager of Déliss’ Pizza in Lyon, created this pizza on the 22nd of February and I’ll be honest with you, it looks more like a quiche or something.

The previous record was set in 2018 in Melbourne, Australia, by Johnny Di Francesco when he made a pizza with 154 different types of cheese.

Why did Benedict think it was necessary to add more than 100 types of cheese to the previous record? Well, he wanted to obliterate it.

Saying that he is from the country of cheese – despite the best cheese being from England – and he claims it was only right.

Speaking to Actu, he said:

“I told myself that we, the French, with our country of cheese, we could easily put 100 more… We couldn’t even see the tomato sauce anymore.“ 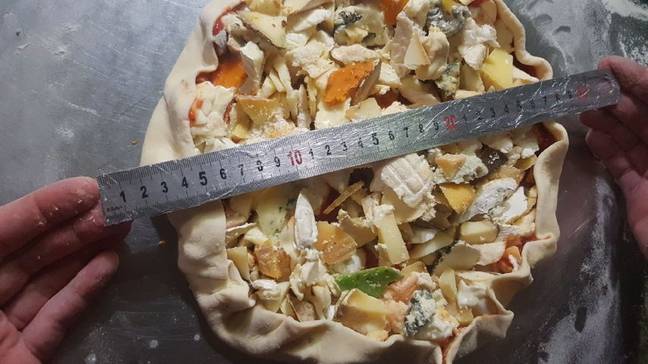 He went on to talk about the requirements for the record, saying:

“The pizza had to be 30 centimetres wide and there should be at least two to four grams of different cheeses.”

But it’s not easy to get ones hand on 257 types of cheese, even if you are only a short swim from the real nation of cheese.

“People laughed when I went to the checkout several times with about 60 cheeses.

“[With] the time to unpack the cheeses and shape the dough, the making of the pizza lasted almost two hours and 20 minutes.

“People think it’s sickening, but it’s not. It is a pizza made for several people, a small piece is enough to appreciate. For the aperitif, it’s perfect.“

The ingredients for the pizza set him back around €1000 and Bruel plans to make plenty more.