Not gold nuggets, not even the cereal Golden Nuggets.

He proposed with a ring he’d hidden in a box of Chicken McNuggets from McDonald’s.

With the nuggets still in, of course.

If this was motivation for a yes, it definitely worked. Whether it was because she loved the nuggets or the husband, we’ll never know. But, she shared the story in a Facebook group called ‘That’s it, I’m proposal shaming,” saying:

I’ve laughed at so many proposals with the rest of you all. It’s time I give back. I present you with my chicken nugget proposal.

My husband, bless his heart, decided on  a whim that he wanted to get me a ring and present it in the cutest way that he could possibly think of in a span of 20 minutes.

I was taking a nap when he left, where he went to Walmart and then McDonalds while on the phone with my best friend to recieve her aid in this feat and when he arrived and woke me up I was still extremely sleepy. But he knew I couldn’t resist nugs.

I opened the box and saw the black box inside (closed then) I said, “What the fuck kind of sauce is this?”

And then opened the box and went “Oh. Oh my God. Is this an engagement ring?”

And the rest is history. 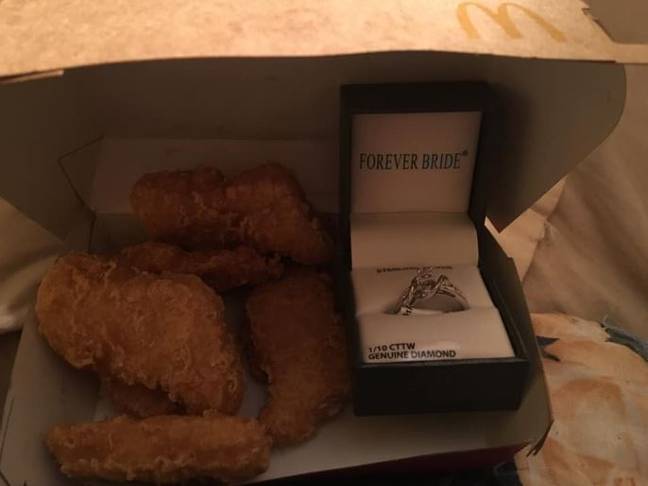 I know I’d say yes! But then, I’d say yes if I was proposed to with an onion ring.

Recently, we’ve seen a worker who revealed he added an extra nugget to every 10 piece he made.

But I’ll let you decide whether an engagement ring or an extra nugget is better!

Polly loves all things writing and all things Disney. She's worked on everything from 999s to fluffy bunnies and is even writing her second novel at the moment. Keep an eye out for her - she's going far. She promises. You can contact Polly at [email protected]