Man Pushed Into Canal After He Berated Girl For Kicking Swan

A man was pushed into a canal after he shouted at a girl for kicking a swan, as she was being goaded to do so by her friends.

Before you go ‘Oh you shouldn’t shout at random girls,‘ this girl was solidly at least in her teens, and I only presume that she’s not an adult woman because A) She’s an idiot, and B) She’s surrounded by equally idiotic teen boys.

Anyway, said young woman was helped by her friends to kick a swan for some reason in a canal in London. Afterwards, they all seemed to commend her for her work, before the group was berated by a nearby man, who was utterly against kicking swans. He was then pushed into a canal. 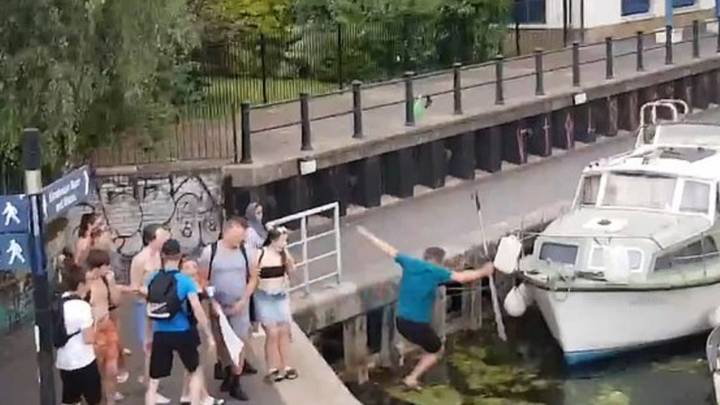 Before we properly get into this, I am very much against everything that happened in this video and while he seems decidedly unhurt, my thoughts are with the man who was just trying to protect the wild animals, but it’s quite nice to see a video like this, filmed in landscape and not with a 2007 Sony Ericsson S500i.

Filmed in Limehouse Basin in the east of London, the girl can be seen kicking two swans who appear to be mating, surrounded by ten or so friends, before the man with his boat hook runs over and berates them. He is soon surrounded by the group as literally all he was doing was telling people to not kick swans, and eventually pushed into the water by a boy who rides off on his little scooter, yelling “have that”.

Police are now trying to identify those in the video as, responding to the video on social media, Metropolitan Police Superintendent Andy Cox said:

“Awful viewing. Animal cruelty is an indicator of many other vile behaviours and a tendency towards other forms of violence.

“The assault & anti social behaviour needs our action. Help us by letting us know who these offenders are via 101 or confidentially via Crimestoppers“.

Meanwhile, the RSPCA are also investigating the incident. They wrote on Twitter, saying:

I just can’t wrap my head around anyone thinking that was at all funny.