Marmite Houmous Is Now Available To Buy In Supermarkets

Marmite humous is now a thing that you can buy if you’re into… marmite and humous.

These two dips and spreads on their own are great. I’m a big fan of humous as it is, and I’ve broken new ground by being neither enamoured – nor enraged – by the yeast extract. Together in Marmite humous? I’m not so sure.

Don’t get me wrong, I will be trying this and who knows, I might be one of those people you see in The Daily Star with the headline ’24-Year-Old Manboy Marries Tesco Dip,’ followed by some obviously staged pictures up me standing outside a Tesco, holding the humous and maybe kissing it. 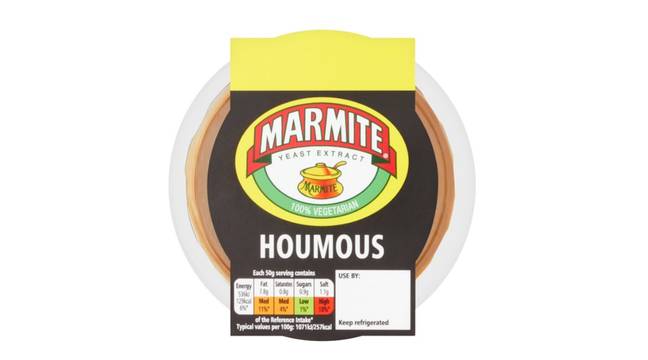 I doubt it though. Never say never, but it’s unlikely.

Being sold in Tesco, £1.50 will get you a 200g 200g pot of the stuff, made from chickpeas, tahini, lemon juice, garlic puree and some bloody Marmite.

We got a teaser for the dip/spread back in March when Marmite themselves shared a fan’s lunch in which they mixed the two ingredients together on toast.

The Marmite combinations are flooding in. Marmite and hummus anyone? 💬 #TuesdayThoughts https://t.co/CdPOg7iClO

I’m sorry. Can we stop for a minute?

How the f*ck do you spell humous? Is it humous, hummus or houmous? Only the latter has the squiggly red line underneath it, but that’s the one that Marmite decided to label their new product with.

But then they say “hummus” in the tweet. I’m saying humous because it looks the most like a human word, but god knows. I’m not from the Middle East, I’m from Surrey. I’ve made humous before, but I’ve never had any cause to write the word down on the Tupperware box that I keep it in. I know what’s in there. I made it.

And another thing, I had no idea Tupperware was a brand name. I got made to capitalise that word. This is like the Hoover/vacuum cleaner or Jacuzzi/hot tub drama all over again. What do they want me to say? I keep my humous in an unbranded, air-tight plastic box? I’m not saying that. I’m not insane.

I’ve digressed completely. You can get this Marmite humous at Tesco in-store or online.