A Massive Creature With 'Bear-Like' Claws 'Freaks Out' Kayakers 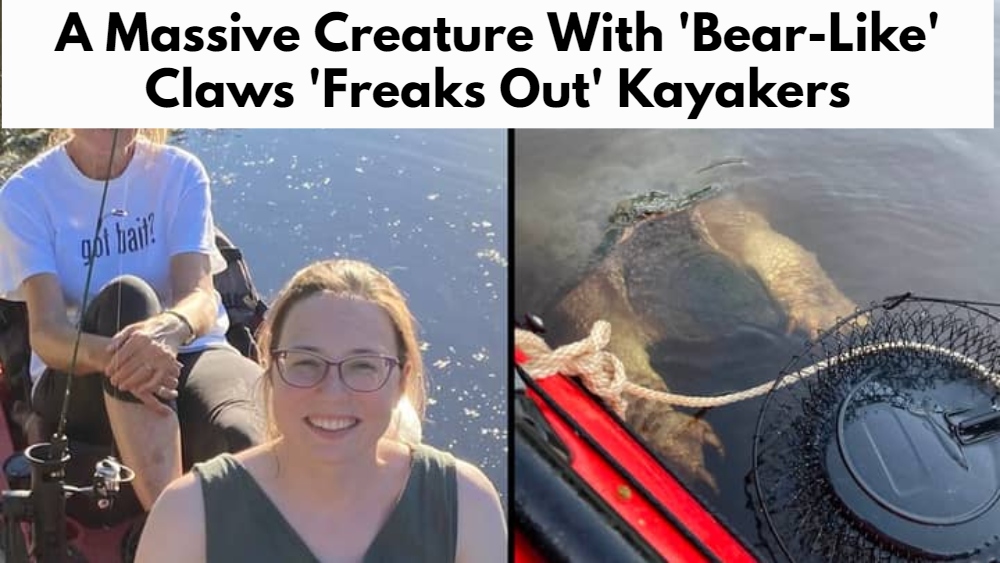 A massive creature with 'bear-like' claws 'freaks out' Kayakers. A mother and daughter, Shala Holm and her daughter Avery were out fishing on the Mississippi River when they got too close to a large creature with enormous claws that resembled bears.

A massive creature with 'bear-like' claws 'freaks out' Kayakers while they were fishing. In Minnesota, Shala Holm and her daughter Avery were out fishing when they heard breathing and at once saw a set of enormous claws hiding beneath their boat.

However, before you freak out and believe we've finally found evidence of some cryptid water-monster, the animal has subsequently been identified as a snapping turtle, a reptile with a prehistoric appearance that is feared for its deadly bite.

Suddenly my daughter said, ‘mom, be quiet, I hear something breathing’. It took a while before we saw the nose of a turtle swimming toward the kayak. As it got closer, we saw how big it was. He dove under the kayak and latched himself onto the fishing basket with his nails. We were so freaked out about the size.

Shala calculated that the size of this specific one was around 29 inches. People frequently inquired about his level of fear, and the 67-year-old replied:

People asked I was afraid, and I must admit at the time I was, which is kind of silly because I am bigger than he was and hopefully smarter. I guess because we were so close to him, being in the kayak, and I didn’t know how badly he wanted those fish and if he would try and get into the kayak. I wasn’t sure how I would get him off the basket. I was nervous about grabbing the handle of the basket, I wasn’t sure how badly he wanted the fish and how aggressive he might be. We’ve all heard stories of snappers snapping a broom stick handle in two.

Several freshwater turtle species (family Chelydridae) go by the name "snapping turtle," named for the way they bite. From eastern Canada and New England to the Rockies, snapping turtles can be found continuously.

They are also sporadic in Mexico, Central America, and Ecuador. Snapping turtles are renowned for their enormous size and domineering personality. They have a long tail, a rough upper shell with hooked jaws, a small, cross-shaped lower shell, and a tan to black coloration.

What Is A Snapping Turtle Lifespan?

Can A Snapping Turtle Hurt You?

Snapping turtles aren't dangerous to people unless they feel threatened, despite their ferocious reputation.

How Strong Is A Snapping Turtle Bite?

Snapping Turtle's bite is about 209 Newtons of force strong.

What Happens If You Get Bit By Snapping Turtle?

Some bites, like those given by snapping turtles, can result in severe injuries like excessive bleeding, wound infection if not properly treated, and even finger amputation.

A massive creature with 'bear-like' claws 'freaks out' Kayakers in Minnesota. The two managed to shake their basket free, and they were able to flee quickly. Despite "freaking out" over the animal, they went back the next day to take more pictures.

Shala then emailed the pictures to the Minnesota Department of Natural Resources, which informed her that the turtle might be around 15 years old.

The Minnesota Department of Natural Resources received the pictures from Shala. The turtle might have been 15 years old, they in turn informed Shala and Avery.

This snapping turtle is quite young considering that they can live up to 70 years. Its size is still astounding, and its claws are obviously unnaturally long. The next time Shala is out on the river, she wants to glimpse the enormous beast.