Matt Lucas has been revealed as the new co-host of The Great British Bake Off, as he is set to replace Sandi Toskvig and host alongside Noel Fielding.

No-one could have predicted that when Channel 4 took Bake Off and pulled in Fielding and Toskvig that it would have actually gone down well, but people seem to prefer this version to what the BBC made.

With the eleventh season on the way, Toskvig pulled out due to other commitments (presumably things like QI) and the show was only left one one host and two master bakers (lol).

Happily though, Channel 4 found someone to fill Toskvig’s tiny little boots, in the shape of someone who, against all odds, isn’t utterly hateful.

That’s not to say that I think Sandi Toskvig is hateful, by the way – I’m a big fan of hers – but what a relief that someone like Jack Whitehall wasn’t brought in.

Instead it’s Matt Lucas, who you don’t hear from much in public anymore, as he more or less sticks to acting on stage and film, and while this is a far cry from his early work of Little Britain, he seems like he’ll be perfect for the role.

In a statement he said:

“I’m chuffed to bits to be joining the most delicious show on television. I can’t wait to break bread with Noel, Prue and Paul and meet the brilliant bakers.

“And bearing in mind my love of cake, I’ve already ordered some much larger trousers in anticipation.”

Fans even joked about dust potentially featuring in the show as Matt Lucas joined the presenting team.

Viewers referenced Lucas’s Little Britain character Marjorie Dawes, who ran a weight loss group called Fat Fighters and would frequently tell her clients to eat “a little bit of dust” in a bid to shed the pounds.

As Lucas has it, it was the abundance of chemistry that he shares with co-host Noel Fielding that convinced Channel 4 that he was the right choice, and while Fielding previous stated that he felt like “Tom without Jerry,” when Toskvig left, I’m sure that Matt will be a more than adequate replacement.

Speaking of her decision to leave the show, Sandi wrote:

“As my waistline will testify, Bake Off is an all-consuming show. 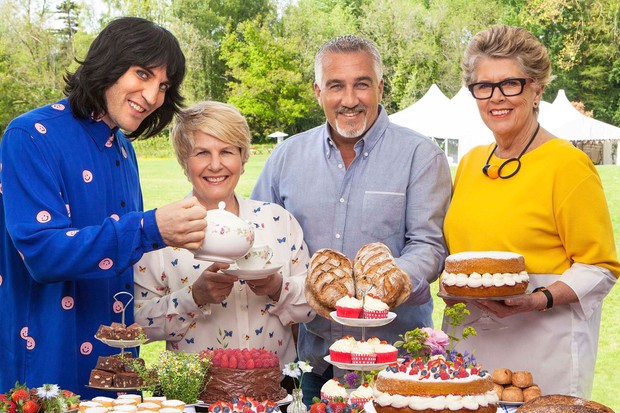 “Spending time with Prue, Paul and Noel has been one of the great pleasures of my life. These are friendships which I know will continue beyond the confines of television.”

Allegedly, to convince him to stay on after the departure of his co-host, Channel 4 handed Noel a lovely packet filled with £150,000.

Not too bad at all.