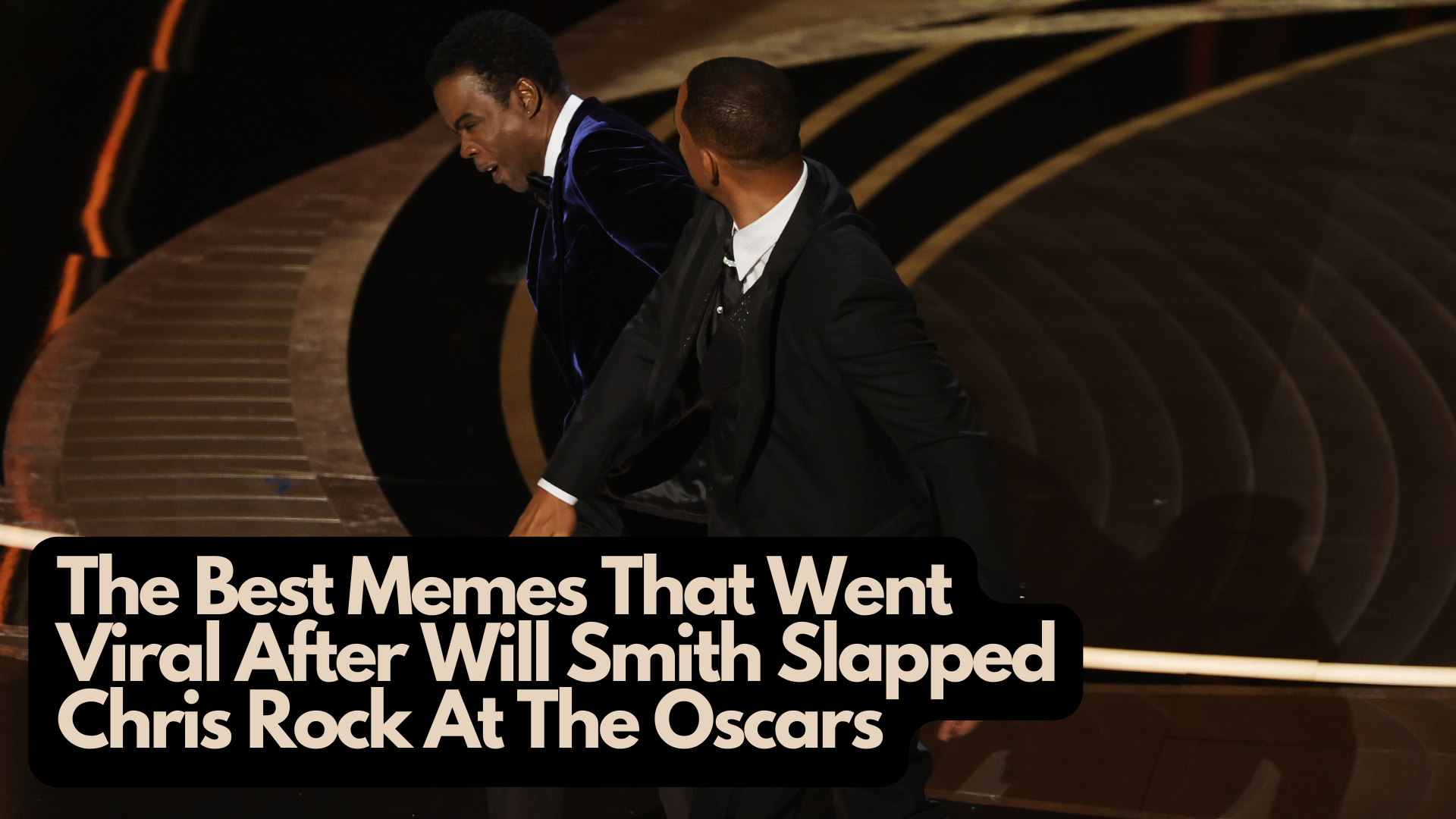 Will Smith jumped on stage and smacked Chris Rock while the comedian was presenting the Best Documentary award at the 2022 Oscars, in what could be the most shocking moment in Academy Awards history. During the 2022 Oscar telecast, Chris Rock and Will Smith got into a fight. When Chris Rock went on the stage to present the Oscar for documentary feature, he then joked about Jada Pinkett Smith (wife of Will Smith) being in "G.I. Jane" due to her shaved bald head. Pinkett Smith has alopecia, which is an autoimmune disease that causes hair loss. Smith then immediately stood up and walked onto the stage and shockingly slapped Rock. Despite the fact that it appeared to be a joke at first, Smith returned to his seat and yelled at Rock, “Keep my wife’s name out of your fucking mouth!”

Meredith O. Sullivan, Smith's publicist, stopped by during the commercial break to speak with him. During the intermission, Denzel Washington stood up to speak with Smith privately. During his best actor speech, Smith revealed that Washington told him, "At your highest moment, be careful, that's when the devil comes for you."

Smith apologized to the Academy and his fellow nominees during his acceptance speech for the best actor award, which he won for his portrayal of Richard Williams in "King Richard," and he apologized to Rock the next day via social media. Meanwhile, Rock has refrained from publicly commenting on the slap. He told a Boston audience at a comedy show that he was "still processing what happened."

Best Memes That Went Viral After The Oscars Shocking Incident

Will Smith, who is frequently used as fodder for memes by social media users, gave birth to a new meme following the 94th Academy Awards. Funny memes arose as a result of the unbelievable event. Take a look at some of them down below.

Will Smith And Batman Memes 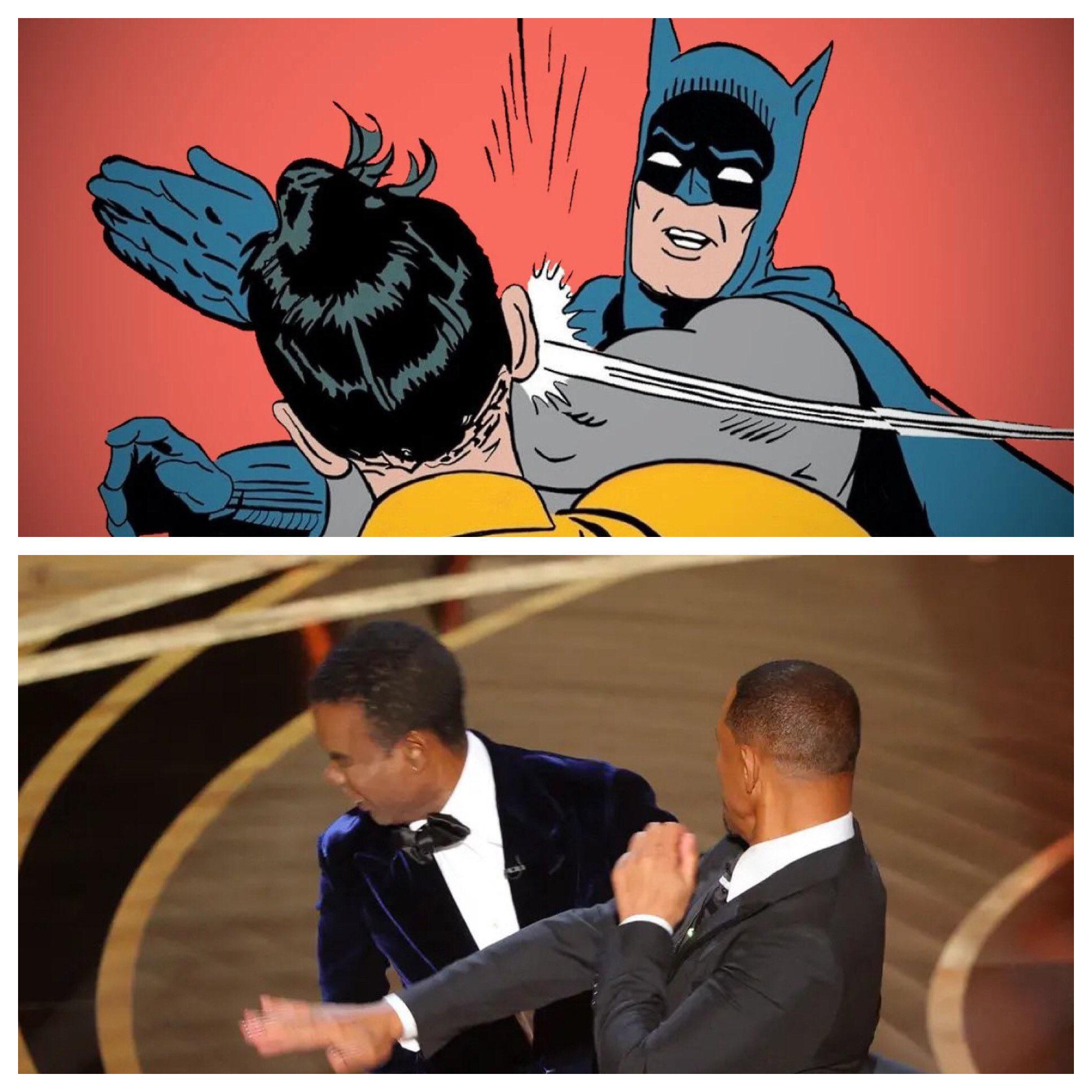 Netizens began to draw resemblances between the incident and some cartoonish art, declaring that it was time to "replace the Batman" slap meme with it. This meme went viral all over the internet really fast as a lot of netizens think of it as hilarious. 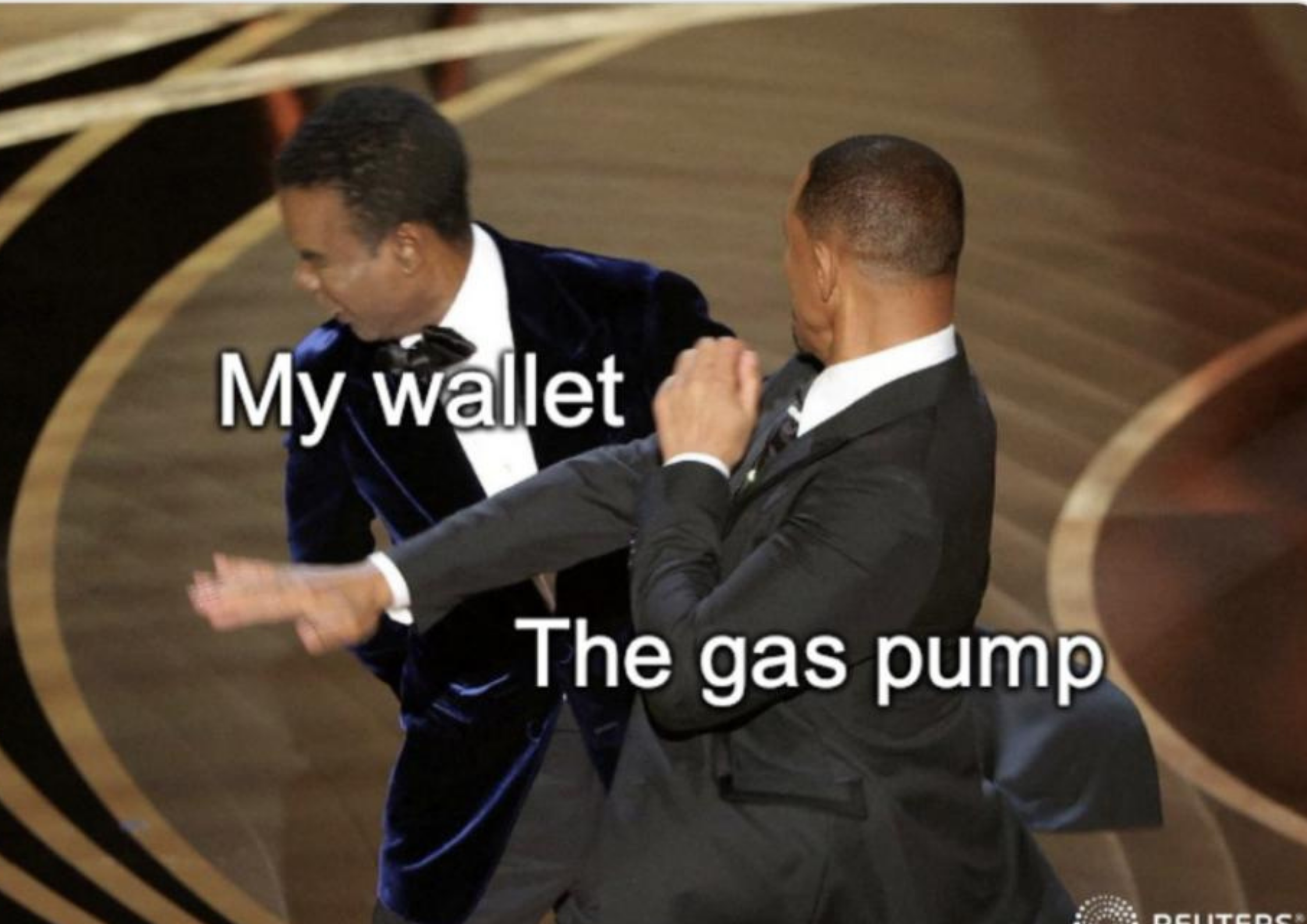 Will smith slapping chris rock on stage with words my wallet , the gas pump

People on Twitter couldn't stop relating it to real-life scenarios. Some of it even refers to the incident in the current gas price increase. 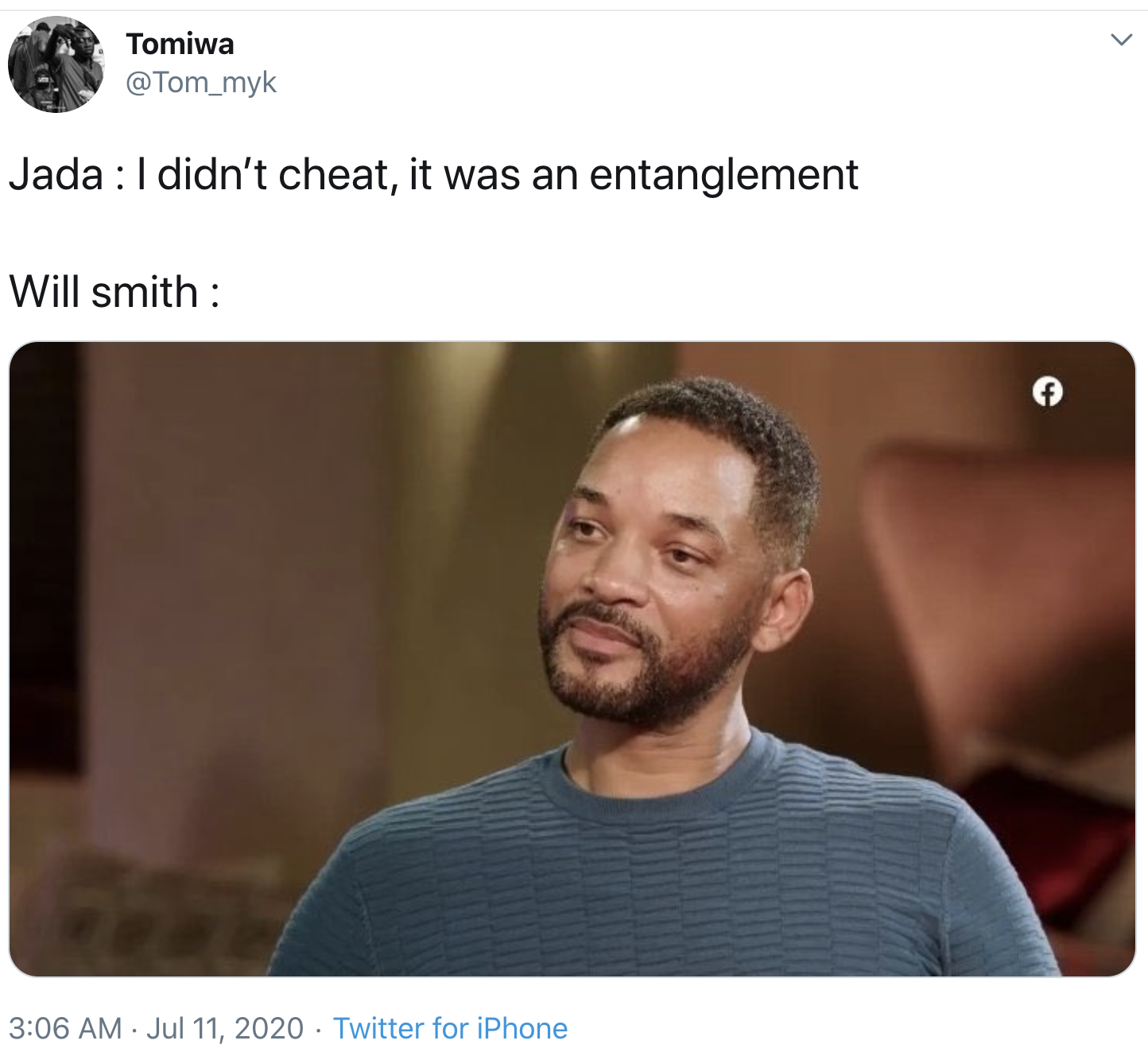 A tweet of sad Will Smith face while sitting

The 'entanglement' meme, which depicts Smith, has been used to discuss his marriage and the Oscars. A 2020 image of Smith crying during a conversation with Jada about her relationship with another man has been used as a meme to question why Smith was so upset about Rock's joke. 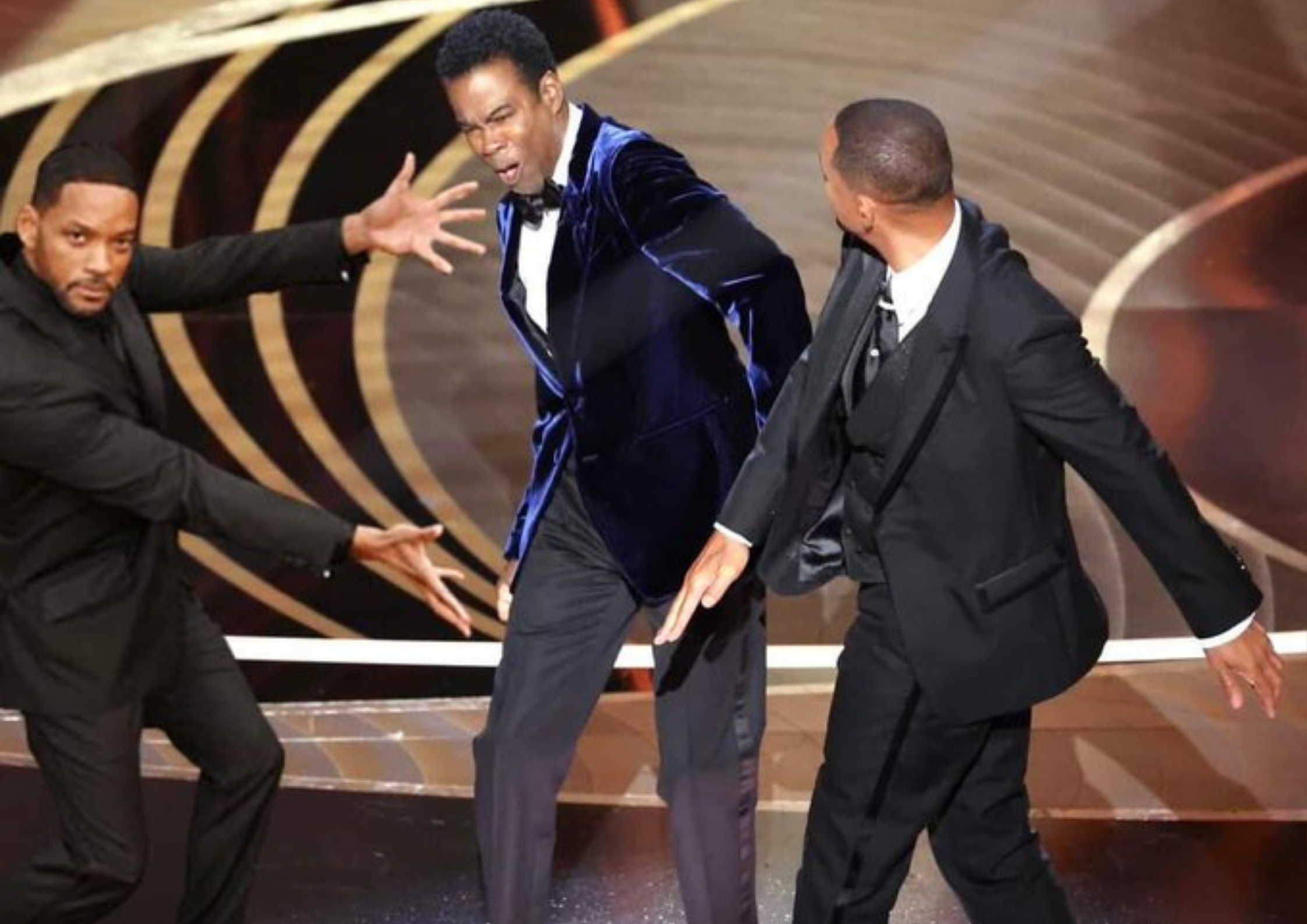 An old meme of Smith and Jada on the red carpet is being combined with new memes about the slap. A photo of Smith and Jada from the 2007 Screen Actors Guild Awards became known as the "Tadá!" meme on the social media platform in 2011, and it has since been widely circulated again. The image has become a meme template, with the image, which shows Smith with his arms spread open to show off his wife, placed next to a picture of something the user wishes to draw attention to. 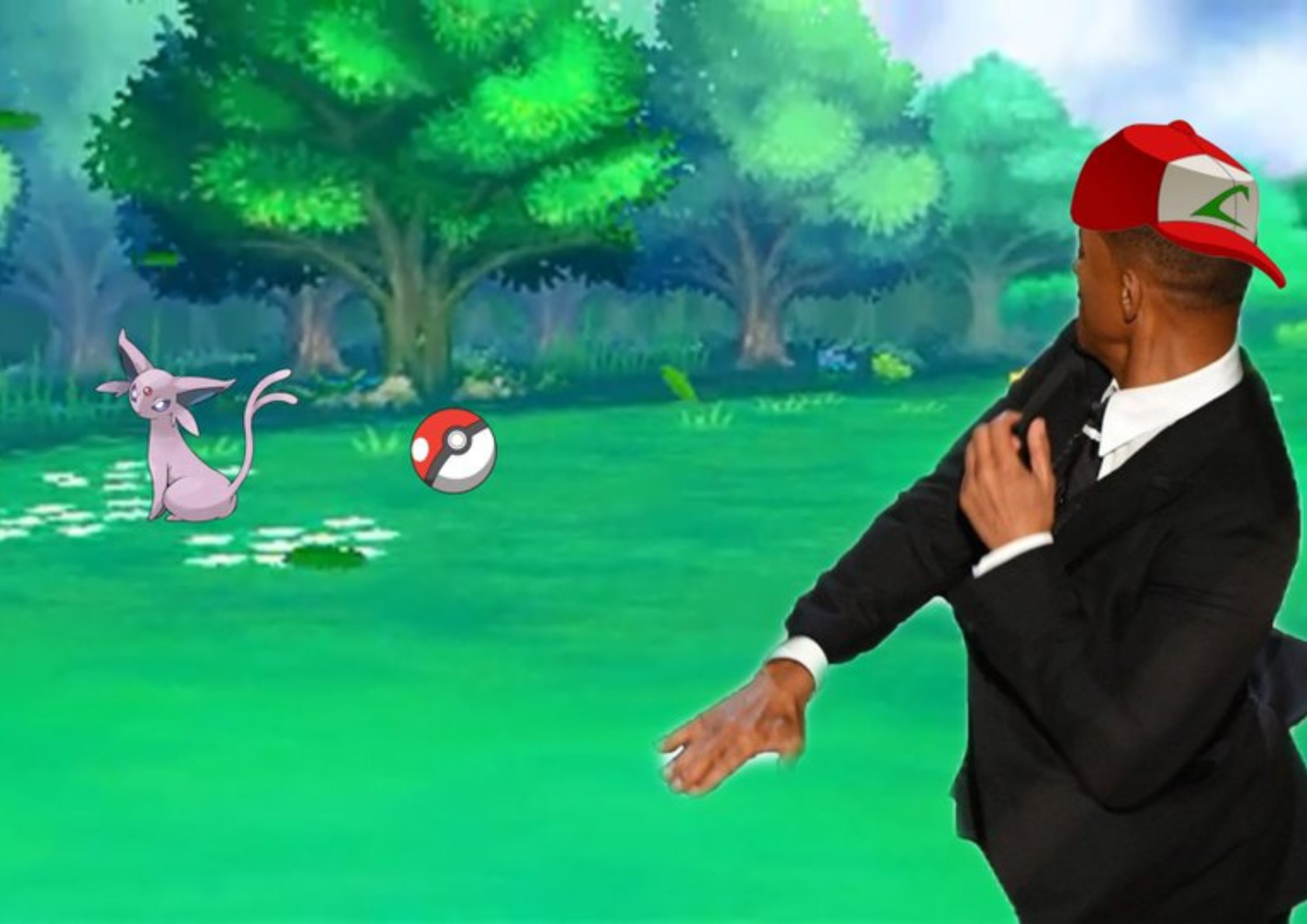 Will smith wearing cap throwing a pokemon ball on the woods

Uncensored images from the moment Smith hit Rock are being referred to as the actor's latest meme. People are making comedic edits of Smith by using the image of Smith swinging his arm to hit Rock. 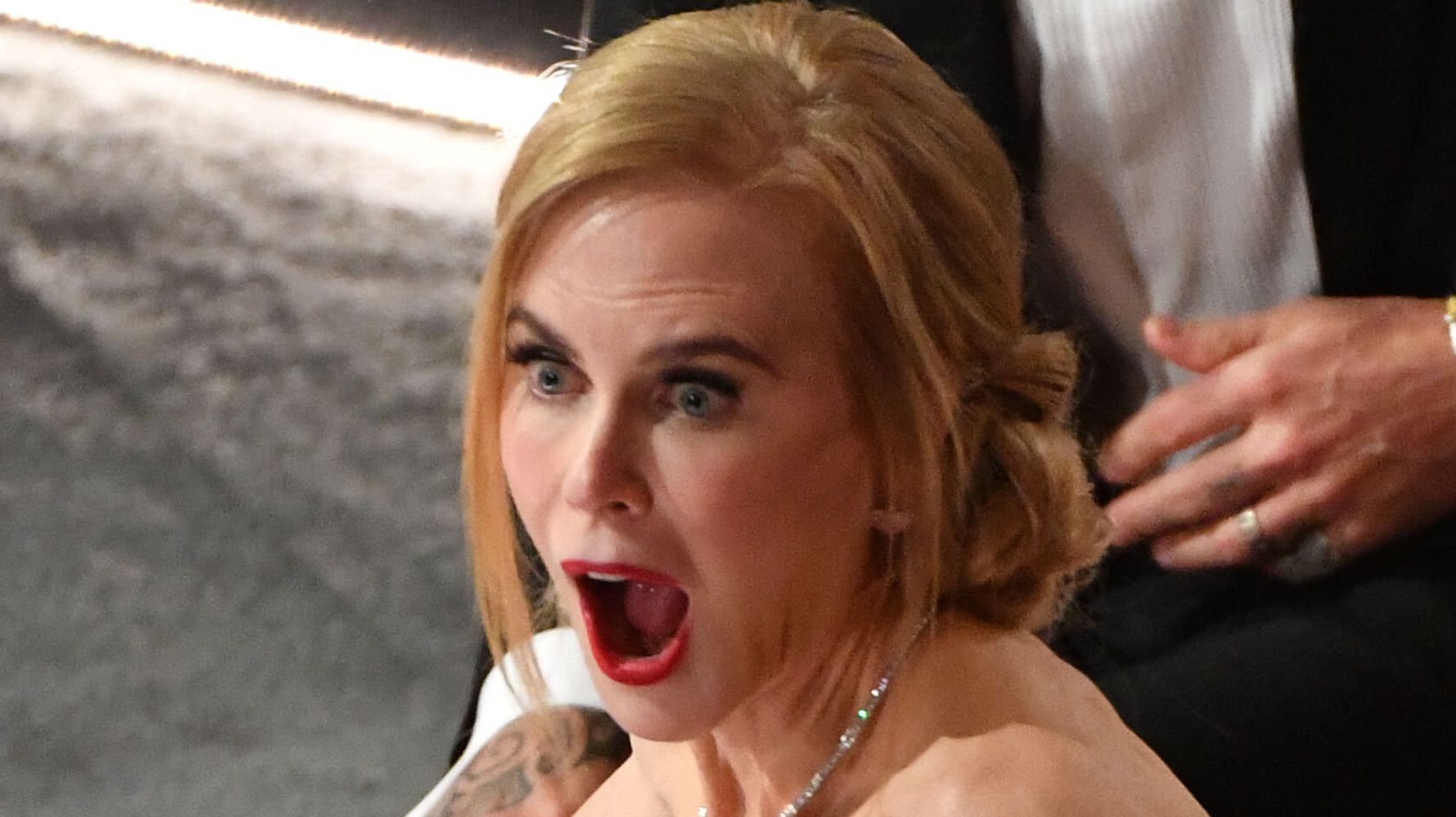 Nicole kidman with a shocked face and open mouth

During a separate segment on the show, a shot of Oscar nominee Nicole Kidman's shocked face made headlines. While the Australian actress wasn't exactly making a "surprised face" at Smith and Rock's altercation during the live telecast, Twitter decided to use the photo to describe the fight despite the fact that her expression occurred well before the slapping scene. 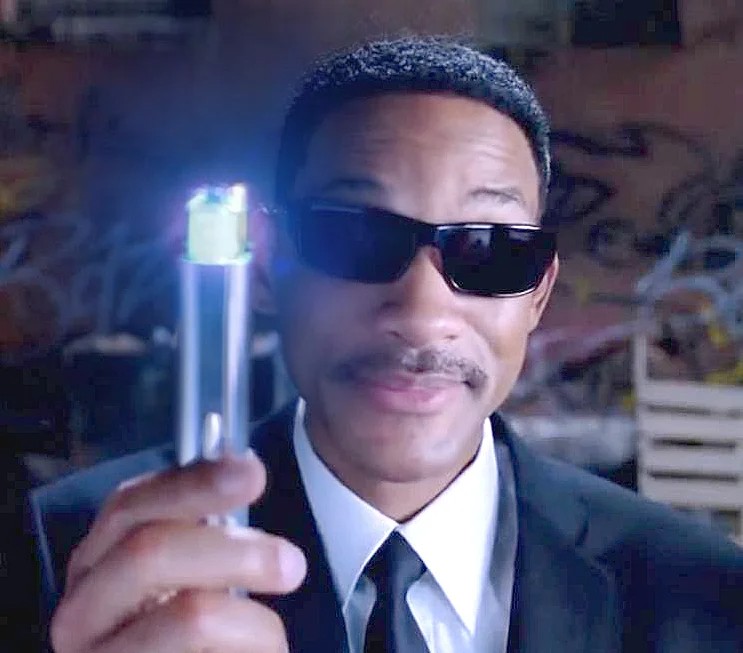 Another viewer posted a photo of Smith's character from "Men in Black" in his dark suit and memory eraser, joking that after the Oscars drama, he would erase everyone's minds who witnessed his violence during the event. 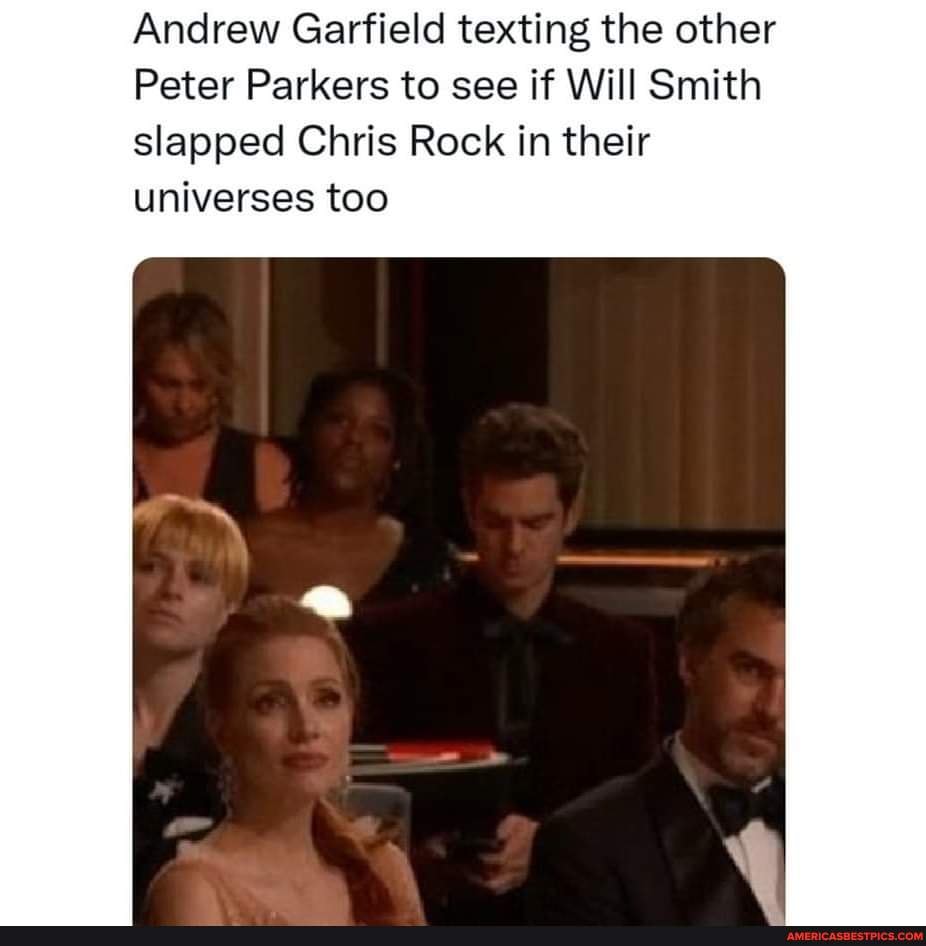 A tweet with andrew gardfield texting during the Oscars

This is officially from an Andrew Garfield fan page, thanks to the internet's obsession with this sneaky moment of him on his phone. In fact, just this photo of him became the night's most popular meme. Netizens are assuming that Andre Garfield is checking on social media for memes about the incident too.

The 94th Academy Awards were supposed to be a celebration of the many people in our community who did incredible work this year; however, those moments were overshadowed by the incident that resulted in viral memes all over the internet. Even though Smith apologized shortly afterwards, the damage was done. His actions have already sparked outrage on the internet, and as usual, we have a numerous of memes to make us laugh after the accident.

As we provide in this article some of the Best Memes That Went Viral After Will Smith Slapped Chris Rock At The Oscars, hope this will also remind you to keep cautious in making jokes and also avoid taking things into violence to avoid similar incidents like Oscar's feud.