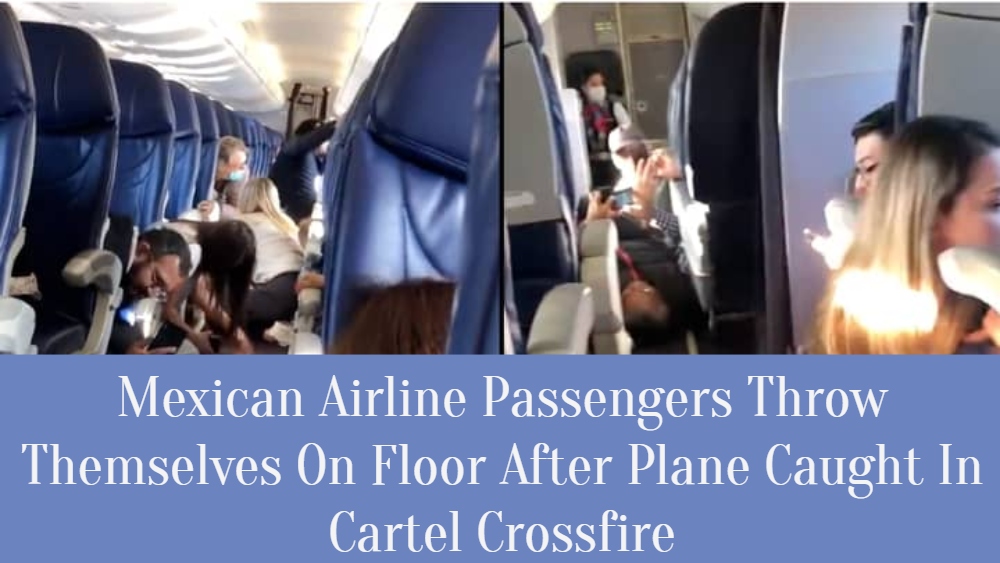 Mexican airline passengers throw themselves on floor after plane caught in cartel crossfire. Upon learning that El Chapo's son had been taken prisoner, passengers on an Aeromexico flight ducked in panic at this horrific moment.

Mexican airline passengers throw themselves on floor after plane caught in cartel crossfire. As fighting broke out after the arrest of Ovidio Guzman, the son of the notorious drug lord El Chapo, a passenger plane was caught in the middle.

Guzman was apprehended on 5 January 2023 in Mexico City after a shootout with federal authorities, and gang violence appeared to follow.

Armed police set up a number of blockades in order to trap and arrest El Chapo's son, who was detained in the shootout in Jesus Maria for his role in the production and sale of fentanyl.

It took six months of surveillance and gathering information to find out where he was and get ready to arrest him.

After Guzman was caught, cartel members fought back with violence. They stole cars from locals and set them on fire, and cartel gunmen attacked security forces with gunfire.

Authorities have warned people to stay indoors, but some who attempted to flee were stranded after their plane was hit by bullets.

Passengers on Aeromexico Flight 165 from Culiacán Airport to Mexico City were forced to dive to the floor after the plane was caught in the crossfire.

The plane was getting ready to take off when people on board heard gunshots. The plane had to turn around and go back to the airport because of this.

In a statement about the incident, Aeromexico confirmed that at least one bullet hit the passenger plane while gang members and security forces were fighting.

This morning a bullet impact was detected in the fuselage of an aircraft that was ready to operate flight AM165 on the Culiacán - Mexico City route, which was canceled for security reasons.

The plane never started its takeoff run. After this incident, the company’s protocols were activated and the authorities were notified. Clients and collaborators are safe.

Aeromexico reiterates that the safety of customers and collaborators is and will continue to be its highest priority.

Social media users have shared videos of passengers on the plane taking cover, showing them crouched on the floor.

While no one on board the plane was hurt in the shooting, a flight attendant confirmed that one of the plane's engines was hit by a bullet in the crossfire, causing a leak.

David Tellez, a plane passenger, had been on the plane with his young family and had hidden in the airport before takeoff after hearing that cartel hitmen might be nearby.

A number of military planes landed at the airport just as the flight was about to take off before the passenger jet was hit by gunfire. People were then told to get off the plane and go to a room with no windows for their own safety.

According to David Tellez, a passenger who boarded the plane with his wife and three children, they decided to stay in the airport until it was safe to leave. 'The city is worse,' he commented at the time. 'There's a lot of gunfire and confusion.'

A Mexican air force plane was also shot at, according to the federal aviation agency, which added that the airports in Culiacan, Mazatlan, and Los Mochis in Sinaloa would remain closed until security could be ensured.

Tellez told the New York Post that the attack occurred as the plane was accelerating for takeoff. Tellez said:

As we were accelerating for take-off, we heard gunshots very close to the plane, and that's when we all threw ourselves to the floor.

Soon after, the airport in Culiacan shut down as security forces walked around the city, which looked like a battleground with burned cars and gunshots heard all over the area.

Tellez, 42, was on his way home with his wife and three children, ages seven, four, and one. Despite encountering road blockades set up after overnight shootouts, he arrived at the airport for his 8.24 a.m. flight without incident.

Even though Guzmán's arrest hadn't been confirmed yet, worried security guards told people to come in as soon as possible.

'Authorities were not saying anything,' he said over the phone. Tellez and his family took refuge in an airport bathroom after learning that gang members were present. The rumor proved false, and the Aeromexico passengers boarded quickly.

However, just as flight AM165 to Mexico City was about to take off, several military planes landed on the airstrip.

Tellez then got out his phone and started taking videos of two big air force transport planes, smaller attack planes that looked like fighters, and military trucks on the tarmac as gunshots could be heard in the distance.

According to a flight attendant, the engine was hit, causing a leak. Passengers were directed to disembark and were taken to an airport waiting room with no windows.

It's not clear who was being shot at, but Tellez said he got off the plane so he could try to catch another flight.

We prefer to stay at the airport until it's safe to leave. The city is worse. There is a lot of shooting and confusion.

Check out this Mexican cartel crossfire in an airplane video:

Who Is El Chapo's First Son?

Ovidio Guzman is El Chapo's first son. Ovidio Guzmán López (born March 29, 1990) is a Mexican drug lord and high-ranking member of the Sinaloa Cartel, a criminal organization based in Sinaloa state. He is the son of infamous drug lord Joaqun "El Chapo" Guzmán, who was once regarded as Mexico's most wanted drug lord and the world's most wanted criminal.

How Did Ovidio Guzmán Get Caught?

Ovidio Guzmán was apprehended for the second time following his 2019 release. Mexican authorities apprehended the high-ranking member of the Sinaloa Cartel, a criminal organization with its headquarters in the state of Sinaloa, who is a well-known drug lord, in the city of Culiacan.

Following the arrest of Ovidio Guzman, the son of infamous drug lord El Chapo and a key member of the Sinaloa cartel, fighting broke out in Culiacan. Mexican airline passengers throw themselves on the floor after the plane caught in cartel crossfire.

According to Aeromexico, no one was wounded on Tellez's flight. Shortly after, the Culiacan airport was forced to close as security personnel combed the city, which was littered with burned-out cars, in an effort to quell the unrest.