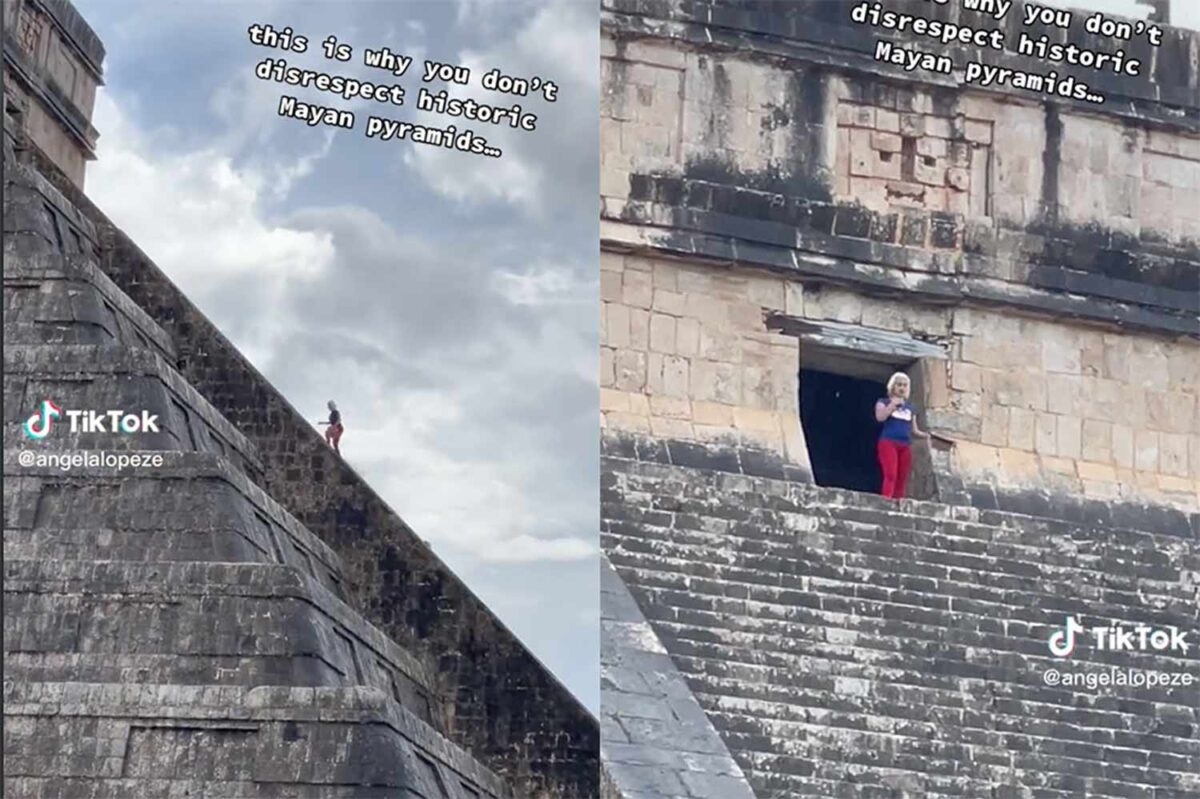 A tourist has run into difficulty as Mexican locals call for woman to be sacrificed as she climbs Mayan pyramid. The step pyramid has had a ban on climbing since 2008. A throng can be seen clamoring for her arrest in the incident's video footage at the bottom. Some allegedly even chanted for her sacrifice.

A woman who was dancing down the Castillo de Kukulcán, one of Mexico's most significant ancient structures, infuriated the audience. Now, Mexican locals call for woman to be sacrificed as she climbs Mayan pyramid.

The woman is shown boldly posing at the top of the steps, either not knowing or not caring that it is forbidden to climb this monument, which is in Chichén Itzá (southeastern Mexico) and is one of the new seven wonders of the modern world (then being booed by onlookers).

She can then be seen reaching the foot of the stairs with chants of "prison" and "sacrifice" ringing out because "this woman does not respect the rules" in a viral video that was shared to TikTok with the comment "this is why you don't disrespect Mayan Pyramids."

On social media, people talked about their own experiences at the site (apparently, you could once climb the steps) and formed their own angry online mobs, insulting and criticizing each other.

One TikTok user remarked, "Our Spanish class took a trip there about 15 years ago, in high school, and we were told to only climb 5 steps because of possibly falling."

"Yes, people used to climb these years ago, I get it but at the same time there were deaths by people falling every year; they're also unstable to climb," said another.

Yet another said: "We used to go every year & we would climb up & they also allowed us to go inside one of the tunnels which led to a shrine of a panther with Jade eyes."

The Mayans, on the other hand, were well renowned for offering human sacrifices, usually by beheading them.

Human sacrifice imagery are frequently carved into Maya architecture's stairways. Therefore, if it even comes to that, this visitor should consider herself lucky to simply receive a fine.

What Were The Mayan Pyramids Used For?

Pyramids were constructed by cultures like the Olmec, Maya, Aztec, and Inca to house their gods and serve as burial sites for their kings.

How Old Is The Mayan Pyramid?

The Maya people constructed the Pyramid of Kukulcan, also known as El Castillo (The Castle), between 800-900 AD.

What Is The Most Famous Pyramid In Mayan?

El Castillo is the most famous pyramid in Mayan.

How Many Mayan Pyramids Are There?

There is a total of 80 Mayan pyramids.

The majority of visitors are aware that they shouldn't climb excessively or disrespect historically or culturally significant sites, but occasionally one decides to defy the rules and perform an idiotic dance for all to watch at the top of the steps.

And one woman actually did it in a Mayan pyramid in southeast Mexico, and it was received about as favorably as you could anticipate. Yes, you got it right as Mexican locals call for woman to be sacrificed as she climbs Mayan pyramid.