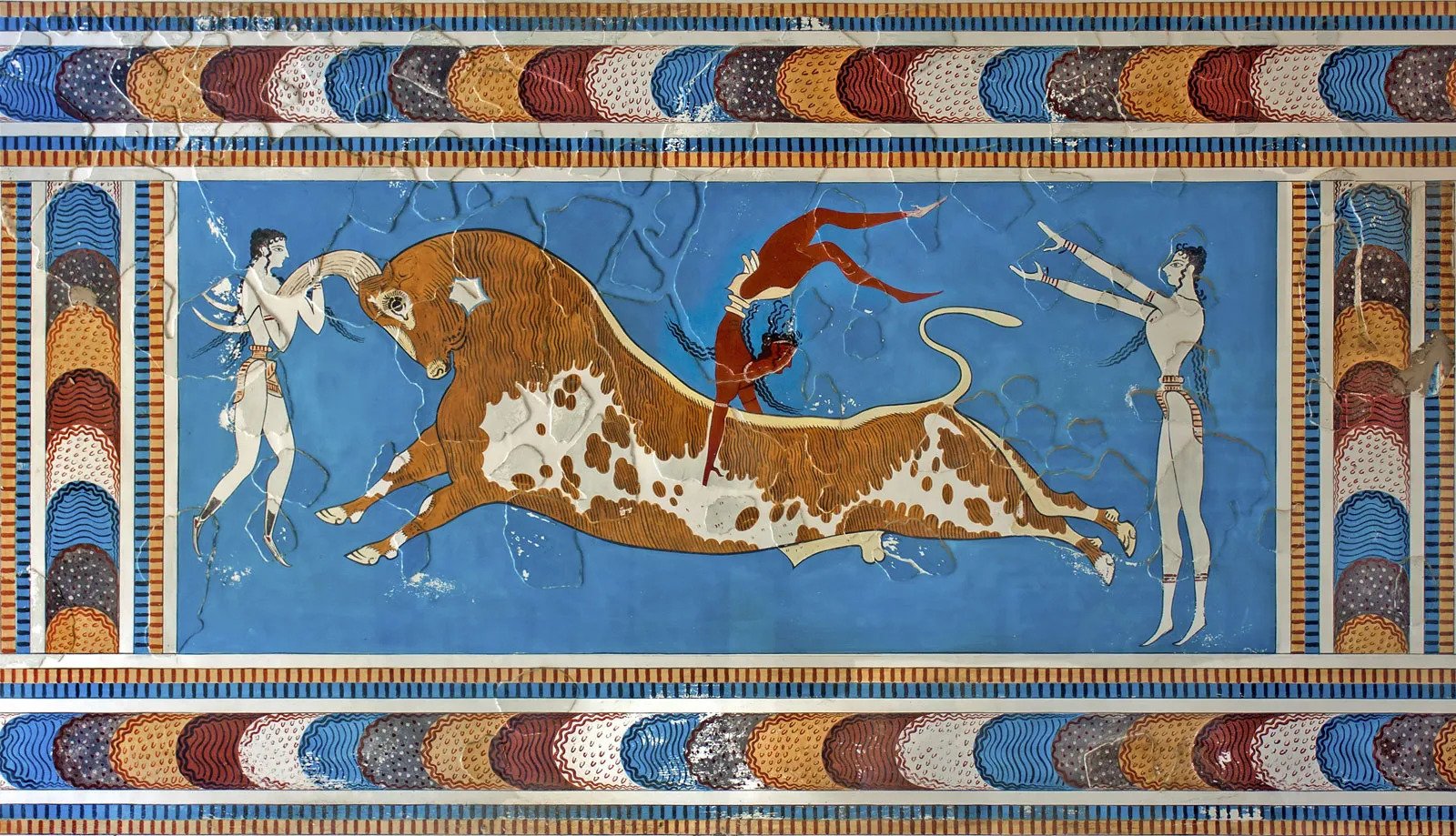 The Minoan civilization of ancient Crete is very interesting to study. They were the first civilization in Europe to construct massive palaces, yet we still haven't broken the code of their language or figured out where exactly they came from.

Really?? Not broken the code yet? Well, we tried. Read on!

How The Minoan Civilization Developed?

The Minoan civilization of ancient Crete was a flourishing Bronze Age culture on the island of Crete that existed from 3000 BCE to approximately 1100 BCE.

It is believed that Minos was either a dynastic title or the name of a specific monarch of Crete who played a role in Greek mythology. Either way, the name stems from Minos.

After the end of the third millennium BCE, Crete emerged as the most important location for the development of Bronze Age culture in the region surrounding the Aegean Sea.

In fact, it was the first center of high civilization in that part of the world. The Minoan civilization was renowned for its large towns and palaces, its extensive trade throughout the Levant and beyond, and its use of writing, all of which reached their zenith around 1600 BCE and continued through the late 15th century CE.

The art of the Minoan civilization of Bronze Age Crete (2000-1500 BCE) reveals a love of animal, sea, and plant life.

This passion was employed to decorate frescoes and ceramics, and it also inspired shapes in jewelry, stone vessels, and sculpture. Crete was home to the Minoans.

Minoan artists took great pleasure in creating flowing, realistic shapes and designs, and the art of Minos possesses a vitality that was lacking in the art of the contemporary East at the time.

Minoan art is significant not only for its aesthetic aspects but also for the insights it provides into the religious, social, and burial traditions of one of the oldest cultures to have existed in the ancient Mediterranean.

Its exquisite art featured intricate seals, pottery (notably the well-known Kamáres ware with its light-on-dark style of ornamentation), and most importantly, delicate and colorful murals that could be found on the walls of the palace.

These frescoes depict both secular and religious situations, such as enchanted gardens, monkeys, wild goats, or fancifully adorned deities that are evidence of the largely matriarchal religion practiced by the Minoans.

The serpent, which was considered to be a representation of the goddess, and the bull are two of the most recognizable motifs in Minoan art.

The ritual of bull-leaping, which can be seen depicted on cult vases, appears to have had a religious or magical foundation.

Around the year 1580 BCE, the Minoan civilization started to spread across the Aegean to neighboring islands as well as to the mainland of Greece.

Around 1500 BCE, the Mycenaean civilization of the mainland began to expand around the Aegean Sea, and it was the influence of the Minoan culture that was represented in that culture.

The palace culture that existed in Crete until about the middle of the 15th century was eradicated when mainland invaders took control of the island.

They founded a new order on the island of Crete and built its centers at Knossos and Phaistos.

After the island was conquered by the mainland, there was a magnificent mixing of Cretan and mainland ways of doing things on the island.

The Late Minoan period, which lasted from around 1400 BCE to about 1100 BCE, was, on the other hand, characterized by a significant loss in both economic power and aesthetic excellence.

A Reddit user named solarpowerz, shared a link in which an attempt was taken to decipher the Minoan language mysteries.

Although it was discovered in the 1950s that Linear B was used to write down ancient Greek, very little is known about the spoken language that Cretan hieroglyphics and Linear A were used to record.

It is possible that each of them encoded a unique dialect, and it is also possible that they encoded more than two dialects combined.

Genetic tests conducted on human remains that date to this time period show that the Minoans' Neolithic heritage may have originated in western Anatolia (what we know today as Turkey). However, the origin of the Minoans themselves is still a mystery.

The majority of Linear A has been discovered on clay tablets, although there are also some that have been preserved on jewelry, stone utensils, and pots.

The majority of what can be seen on the clay tablets are what appear to be administrative records.

Researchers are aware of the Minoan number system because it is consistent across both sets of characters in Linear A and Linear B.

Researchers were able to decipher the phrase "total," which often appears at the bottom of administrative tablets written in Linear A and B because these tablets appear to be identical. The word "total" is written as "Ku-Ro" in Minoan.

Researchers have also been successful in deciphering a number of terms, such as those for wool and fig, by using the fact that these words remained in Greek while not having their roots in Greek.

Some proper Minoan names have also been partially translated.

According to Salgarella, Phaistos is written as "Pa-i-to" in both Linear A and B, while the name Knossos may have originated from the Minoan name "Ku-ni-su," though this is less definite.

Archaeologists have deciphered the meaning of a great many more of the signs, like the one that depicts "olive oil," despite the fact that they do not know how the words themselves were uttered or pronounced.

The fact that the Greeks used the same symbol makes it very evident that it refers to olive oil.

How Did The Minoan Civilization End?

An enormous volcanic eruption occurred approximately three and a half thousand years ago on the tiny island of Thera, which is located in the Aegean Sea.

This event is considered to be one of the most catastrophic natural disasters that have occurred since the Ice Age.

This cataclysm took place one hundred kilometers away from the island of Crete, which was the center of the prosperous Minoan civilization.

The collapse of the civilization occurred fifty years following the volcanic explosion. Could it be said that the volcano dealt the Minoans their final blow?

What Were The Minoans In Crete Famous For?

The Minoans of Bronze Age Crete are famed for their huge buildings that resembled palaces, the vivid and colorful paintings that they painted inside of these palaces, and their pottery, which was frequently decorated with depictions of marine life.

Why Is The Ancient Civilization Of Crete Termed Minoan?

The Minoan civilization was a Bronze Age civilization that lived on the island of Crete from around 3000 BCE to approximately 1100 BCE. It is believed that Minos was either a dynastic title or the name of a specific monarch of Crete who played a role in Greek mythology. Either way, the name stems from Minos.

What Was Civilization Like For The Minoans On Crete?

The Minoans were skilled artisans who produced a variety of goods, including jewelry, ceramics, seals, and figurines, in addition to being olive farmers. Because of their skill with bronze, we can date this culture to the Bronze Age. Between the years 2,000 to 1400 B.C., when their culture was at its pinnacle, the Minoans established a civilization focused on palaces.

Have you heard about the Minoan civilization of ancient Crete before? What do you like most about them? Well, for me it is their art. OMG!!!

How beautiful and captivating is that!

Have you heard about the thor's well?