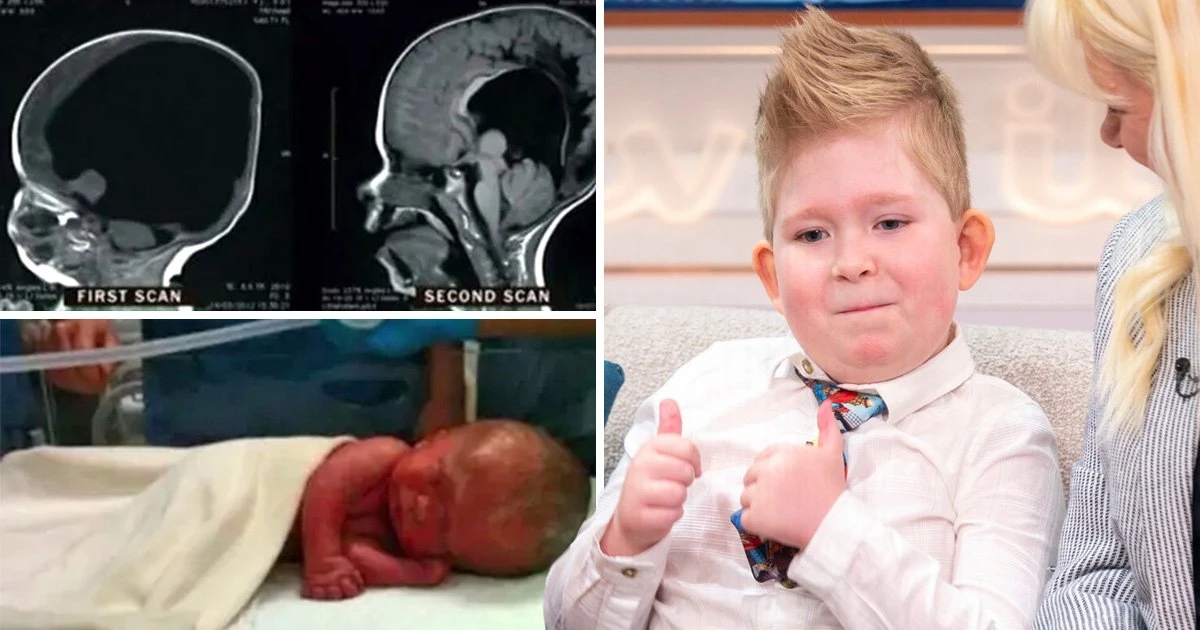 Despite what doctors had feared, a kid who was born with only two percent of his brain is now 10 years old and happy. Yes, you got it right. The miracle boy born with no brain defies the odds as his brain grows back.

Noah Wall - The Miracle Boy With 'No Brain'

The miracle boy born with no brain defies the odds after his brain started growing. Amazingly, Noah Wall's brain "grew back" throughout the years, reaching 80% when he was only three years old.

However, the prognosis was not as promising during the pregnancy. With spina bifida and nearly no brain tissue development in the womb, Noah had very little chance of surviving.

These factors led doctors to ask Noah's Cumbrian parents, Shelley and Rob, not once, but five times, if they wanted to end the pregnancy. Even though the physicians had drawn the worst-case scenario, they were adamant that they would not choose that course of action.

According to Rob, who also has two children with Shelley:

If younger people were offered that choice, they may have felt pressured into taking it. But because we're older parents, we know our own mind and we're positive people. So we wanted to give Noah a second chance.

Noah can do all the things that experts predicted he wouldn't be able to accomplish, like talk, hear, see, and grin, so it is clear that the decision has paid off.

While many people think Noah's brain has grown back, others wonder if it was just compressed and then gradually expanded when a shunt was implanted.

Even if his brain had been so squashed up, he'd be severely mentally disabled because of all that damage, and look at him - he's as bright as a button.

Despite all odds, Noah has surpassed all benchmarks. The family has traveled to Australia to learn about a treatment called "neurophysics," which combines physiotherapy and cognitive exercises. However, this is just the beginning for them.

Noah has been evaluated, even though he is still too young to get the treatment so he will be ready when the time comes. When that time comes, little Noah has his sights set on learning to surf. Hats off to Noah and his family; there's little doubt that this youngster will keep surprising us for years to come.

How Is Noah The Boy With No Brain Doing Now?

The young patient is currently recovering from a lengthy procedure with a smile on his face and his goals within reach.

What Happens If A Baby Is Born Without A Brain?

The most typical form of anencephaly occurs when, with the exception of the brain stem, the whole brain fails to develop. With holoanencephaly, infants seldom live longer than one day after delivery.

How Long Can A Baby Born Without Brain Live?

Despite only 2% of his brain function when he was born, Noah Wall defies the odds and turns 10 today.

Noah Wall, from Cumbria in northern England, received a spina bifida diagnosis while still in the womb of his mother, Shelly Wall. The structure from which the baby's brain and spinal cord originate does not correctly close as a result of the birth abnormality.

This could cause spinal cord and nerve damage in the baby, resulting in impairments. The miracle boy born with no brain defies the odds. The parents of their son, a boy born with only 2% of his brain, have emphasized his "amazing" progress.