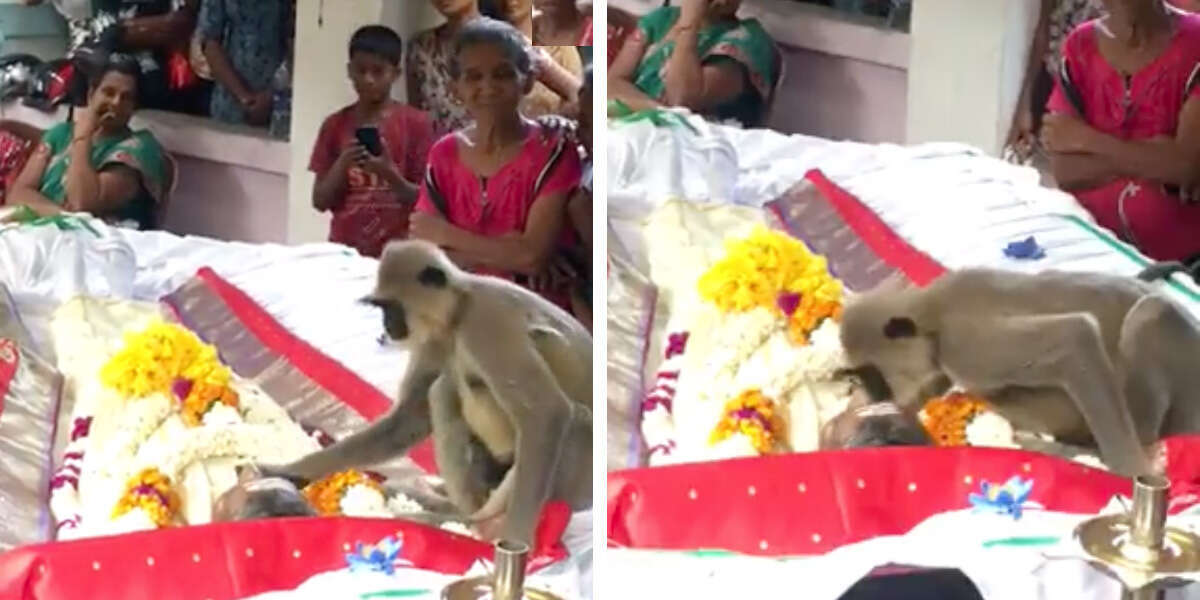 The monkey appears at the funeral to mourn the man who used to feed him. Peetambaram Rajan, 56, of Batticaloa, Sri Lanka, passed away following a severe illness.

However, despite the fact that there don't seem to be many details about Rajan's life online, the reactions of people he left behind indicate that it was filled with love. Not just for people, either.

Rajan was well-known for his love of animals. He was apparently visited daily by a neighborhood gray monkey, to which he would provide goodies. But it seems that Rajan did more for her than just satisfy her hunger. He appeared to have affected her heart as well.

Rajan was undoubtedly loved and respected by his family as well as the animals he cared for, as seen by the fact that the monkey appears to be grieving alongside his family. The monkey appears at the funeral to mourn the man who used to feed him, and joined his heartbroken family as they gathered to pay their last respects after his departure.

It should not be surprising that the langur would be devastated to learn that Rajan had passed away given the mutually trusting relationship they shared. Although there may at times seem to be a difference between humans and other animals, our experiences with love and grief are generally similar.

There is no doubt that many animals experience rich and deep emotions. It's not a matter of if emotions have evolved in animals but why they have evolved as they have. We must never forget that our emotions are the gifts of our ancestors, our animal kin. We have feelings and so do other animals. Among the different emotions that animals display clearly and unambiguously is grief.

There is another story that how much animals respect and love the ones who were good to them.

This tale is really heartwarming! In order to pay their respects and bid farewell, a gang of stray dogs showed up at the funeral of the woman who had always provided them with food and affection.

Margarita Suárez was an animal lover who resided in Merida, Mexico. The animals in her area adored her since she took care of the stray dogs living there.

Patricia Urrutia, her daughter, claimed that her mother was unable to simply run towards a wandering animal and turn them away from food.

On March 15, 2015, family and friends gathered for Suarez's funeral. Urrutia remarked that "on the worst day of her life something great happened." Some stray dogs showed up at the parlor out of the blue to pay their respects.

Several stray dogs followed the casket carrying her mother inside the chapel. Urrutia initially assumed the dogs at the funeral home were familiar, but she soon realized they were invading the space containing her mother's remains.

Whose Funeral Was Attended By A Monkey?

Peetambaram Rajan, a Sri Lankan man, used to feed a monkey. The same monkey showed at his funeral when he died.

What Animals Grieve Their Dead?

Because not only big-brain cetaceans (whales and dolphins) or primates exhibit sorrow, but also seals, manatees, dingoes, horses, dogs, housecats, and other animals, mourning has been observed in a variety of species.

How Long Do Animals Grieve For?

Others may appear to become stuck, while some pets will go through the grief process rapidly or not at all. The grieving behaviors of a normal pet lasted less than six months, yet this is still longer than many owners might think.

A monkey appears at the funeral to mourn the man who used to feed him. The monkey was seen in a video taken by mourners in Rajan's open casket, resting her palm on his chest tenderly.