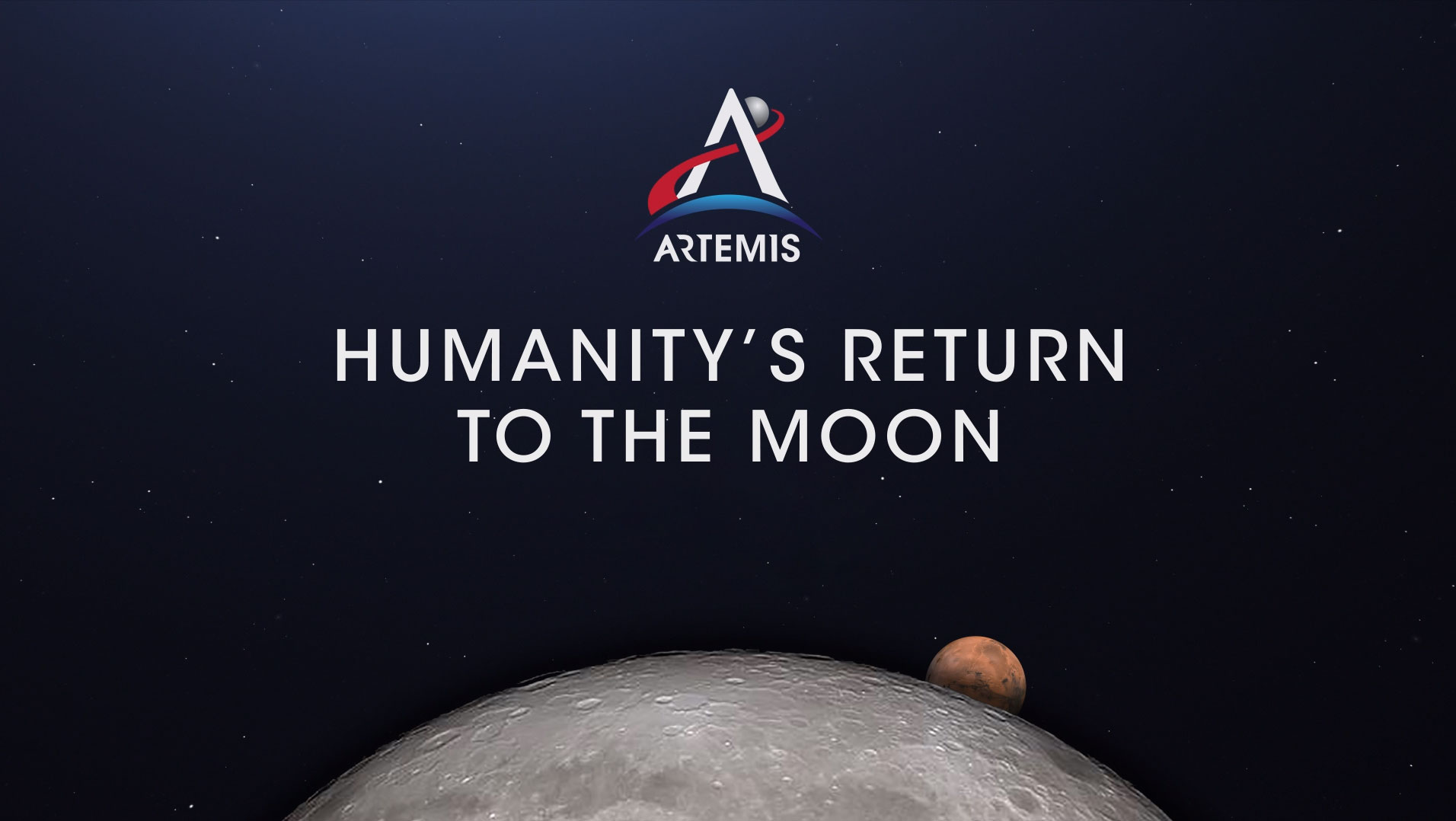 In an effort to expedite its extraterrestrial exploration, NASA is getting ready to return humans to the moon. The NASA Artemis 1 mission, the first group of US citizens to visit the moon since the final Apollo lunar mission in 1972, will take place, and it will feature a woman for the first time in space mission history in the coming weeks of September and October.

The Space Launch System megarocket's maiden test flight with its Orion spacecraft will be the unmanned Artemis 1 launch, which NASA will prepare for with a series of webcasts.

Special celebrities like Chris Evans, Jack Black, and Keke Palmer will appear during the launch day livestream. In the internet live feed, you can already see real-time views of the Artemis 1 moon rocket perched atop its pad.

This month's launch should be quite a spectacle because the last time a rocket this potent thundered off a KSC pad was in 1973 when a Saturn V moon rocket delivered Skylab into orbit, ending the Apollo era.

When it's time to light the candle for Artemis I, NASA says that it will provide thorough coverage of the prelaunch, launch, and postlaunch events. This historic unmanned practice run around the moon will pave the way for a crewed moon-bound flight test with Artemis 2 in 2024 and a real lunar landing with Artemis 3 by 2025.

The 8.8 million pounds of thrust, beating gravity and lifting the svelte SLS rocket and Orion spacecraft into the heavens, will be awe-inspiring for anyone fortunate enough to be attending the Artemis 1 extravaganza in Florida.

NASA also announced the schedule for the free livestream feed so the rest of you can watch the mission in the privacy and comfort of your own homes. NASA Television, the agency's mobile app, and the official website will all webcast prelaunch activities live during the event on Space.com.

Although it may not offer the same spectacular experience as the earth-shattering blastoff, it is still the best alternative because you won't have to deal with the heat, difficult parking, or a large crowd.

In the live broadcast of the celebrations on launch day, Jack Black, Chris Evans, and Keke Palmer make appearances in the live broadcast. Josh Groban and Herbie Hancock also give a stirring rendition of "The Star-Spangled Banner" as part of the broadcast. The Philadelphia Orchestra and cellist Yo-Yo Ma will then perform "America the Beautiful" under the direction of Yannick Nézet-Séguin.

After Artemis I lifts off, Orion will travel 1.3 million miles in 37 days to the moon, complete a loop around it, and then return to Earth (2.1 million kilometers). On August 16, 2022, the Artemis I Moon rocket from NASA is brought out to Launch Pad Complex 39B at the Kennedy Space Center in Cape Canaveral, Florida.

The gigantic Space Launch System (SLS) rocket, which will be the most potent in the world when it enters into operation, will launch for the first time on Artemis 1, an unmanned test mission. It will launch the Orion crew capsule into lunar orbit.

For 42 days, the spacecraft will orbit the Earth before making its way back to the planet.

Why is NASA sending Artemis I back to the moon 50 years later?

Although there are no humans on the passenger list, Orion will also be carrying three mannequins and a plush Snoopy toy.

The crew of the Artemis may sound a bit odd, but they all have a reason. Snoopy will act as the zero gravity indicator, which means that once the capsule reaches space, it will start to float inside.

The mannequins, who go by the names Commander Moonikin Campos, Helga, and Zohar, are used to test new suits and shielding equipment as well as monitor the deep space radiation that future astronauts may encounter.

Orion also has a biology experiment hidden inside it to observe how life responds to radiation using seeds, algae, fungi, and yeast. On the rocket, there are also more technological and scientific exhibits riding in a circle. Ten tiny satellites, known as CubeSats, will then separate and scatter to gather data about the moon and the deep space environment.

Photos and videos taken by cameras both inside and outside of Orion will be released during the mission. This includes live views from the Callisto experiment, which will record a stream of Commander Moonikin Campos sitting in the commander's seat.

Additionally, if your gadget supports Amazon Alexa, you can ask it every day to tell you where the mission is. You can expect to see views of Earthrise that are similar to the ones that were first shown in 1968, but with much better cameras and technology. 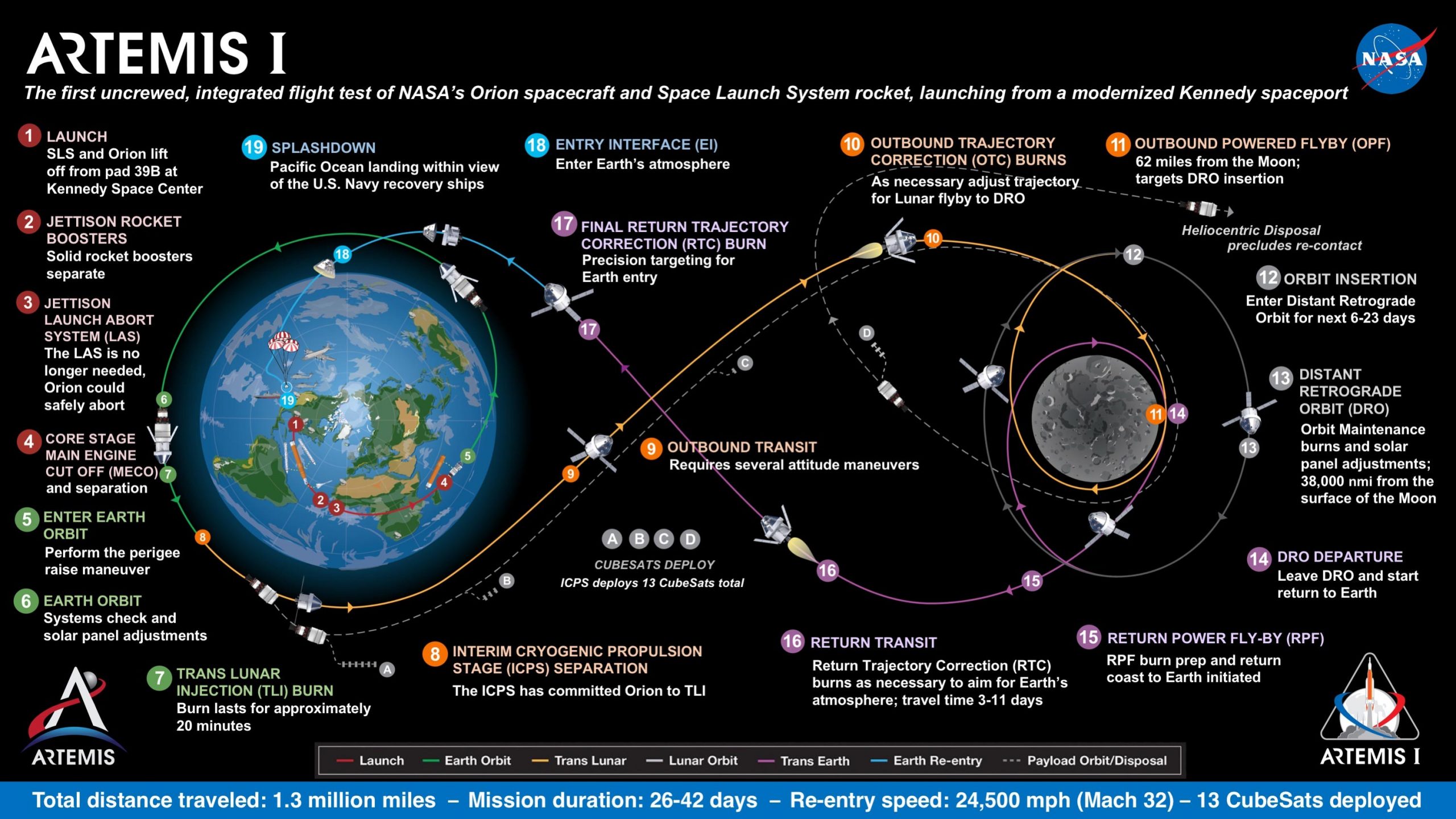 Route of Artemis I from Earth to Moon and beyond

NASA Artemis I Launch Is Delayed

At the start of a 2.5-hour planned hold, NASA planned to restart its Artemis 1 launch countdown on Saturday, Sept. 3 at 4:37 a.m. EDT (0837 GMT). At the conclusion of the 2.5-hour hold, the countdown to launch was planned to start.

After a second scrubbed launch attempt on Saturday, September 3, 2022, NASA said that it would not pursue a launch of Artemis I for the duration of the launch window, which expires on Tuesday. Depending on the decision made by the team early next week, future launch windows, including those in September and October, could be delayed by at least a few weeks.

NASA's Jim Free, associate administrator for NASA's Exploration Systems Development Mission Directorate, announced that "We will not be launching in this launch timeframe. We are not in the location we desired."

Free stated that until they obtain a waiver from the range, which is overseen by the US Space Force, the stack, which includes the Space Launch System rocket and Orion spacecraft, must roll back into the Vehicle Assembly Building.

The head of NASA, Bill Nelson, said that the shuttle went back to the Vehicle Assembly Building twenty times before it took off, and he said that two scrubs cost much less than a failure.

Nelson stated, "We don't launch until we think it's right. These teams worked diligently to arrive at their conclusion. I see this as a component of our space program, where safety comes first."

Three hours prior to the start of the launch window, at 11:17 a.m. ET, the scrub was declared. The team found a leak of liquid hydrogen, which took most of the morning to fix. The launch of Artemis I had to be put off until Sunday afternoon.

One of the propellants utilized in the rocket's massive core stage is liquid hydrogen. Despite trying numerous troubleshooting techniques, the leak stopped the launch team from being able to fill the liquid hydrogen tank. There had previously been a little leak in this location, but on Saturday it grew significantly.

The team thinks a liquid hydrogen connection's soft seal may have been harmed by an overpressurization incident, but they will need to check more closely. Mike Sarafin, the mission manager for Artemis, declared that the leak was unmanageable.

The space agency has had to stop the launch countdown due to technical difficulties twice in the past week. The first launch attempt, which was supposed to happen on Monday, was called off because of a number of problems, including a system meant to cool the rocket's engines before takeoff and many leaks that showed up as the rocket was being fueled.

The quick disconnect cavity in the engine portion of the core stage is where the liquid hydrogen leak was discovered on Saturday around 7:15 a.m. ET. It wasn't the same leak that appeared before Monday's scrubbed launch. 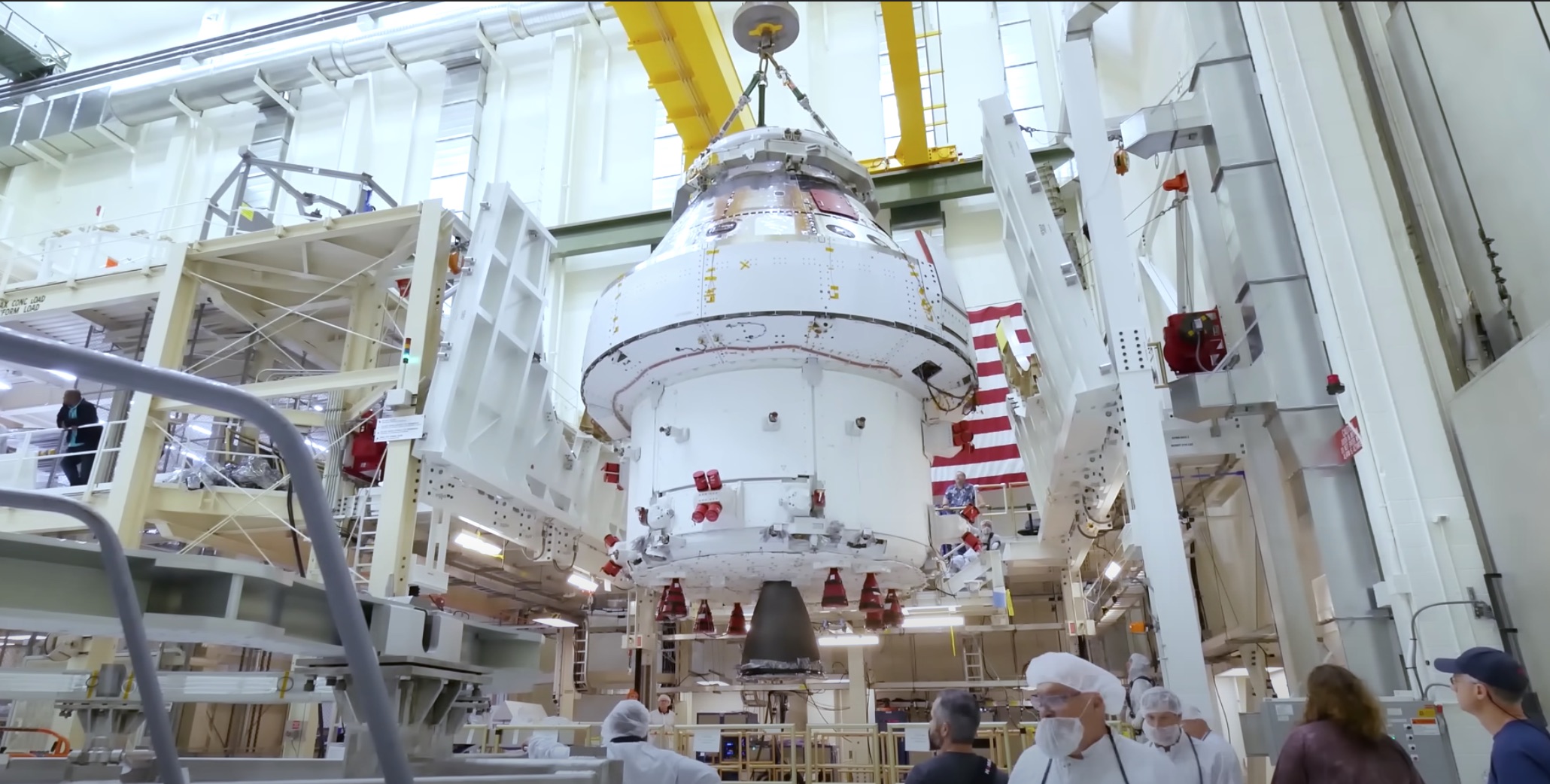 Making of Orion for the mission of Artemis 1

That troubleshooting strategy did not work. The team tried the first strategy once more to warm up the line, but after manually restarting the flow of liquid hydrogen, the leak returned.

Melody Lovin, a weather officer, stated that there was a 60% chance of good weather for the launch. At the Kennedy Space Center in Cape Canaveral, Florida, the Artemis I stack, which consists of the Space Launch System rocket and Orion spacecraft, is still present.

With the first mission of the Artemis program, NASA will start a new phase of space exploration. By 2024 and 2025, they want to send crewed flights to Mars and land astronauts in parts of the moon that haven't been explored before.

NASA's moonshot goal with Artemis is to return humans to the moon and create a sustained human presence on and around the lunar surface that will start with landing the first woman and the first person of color on the moon this decade. 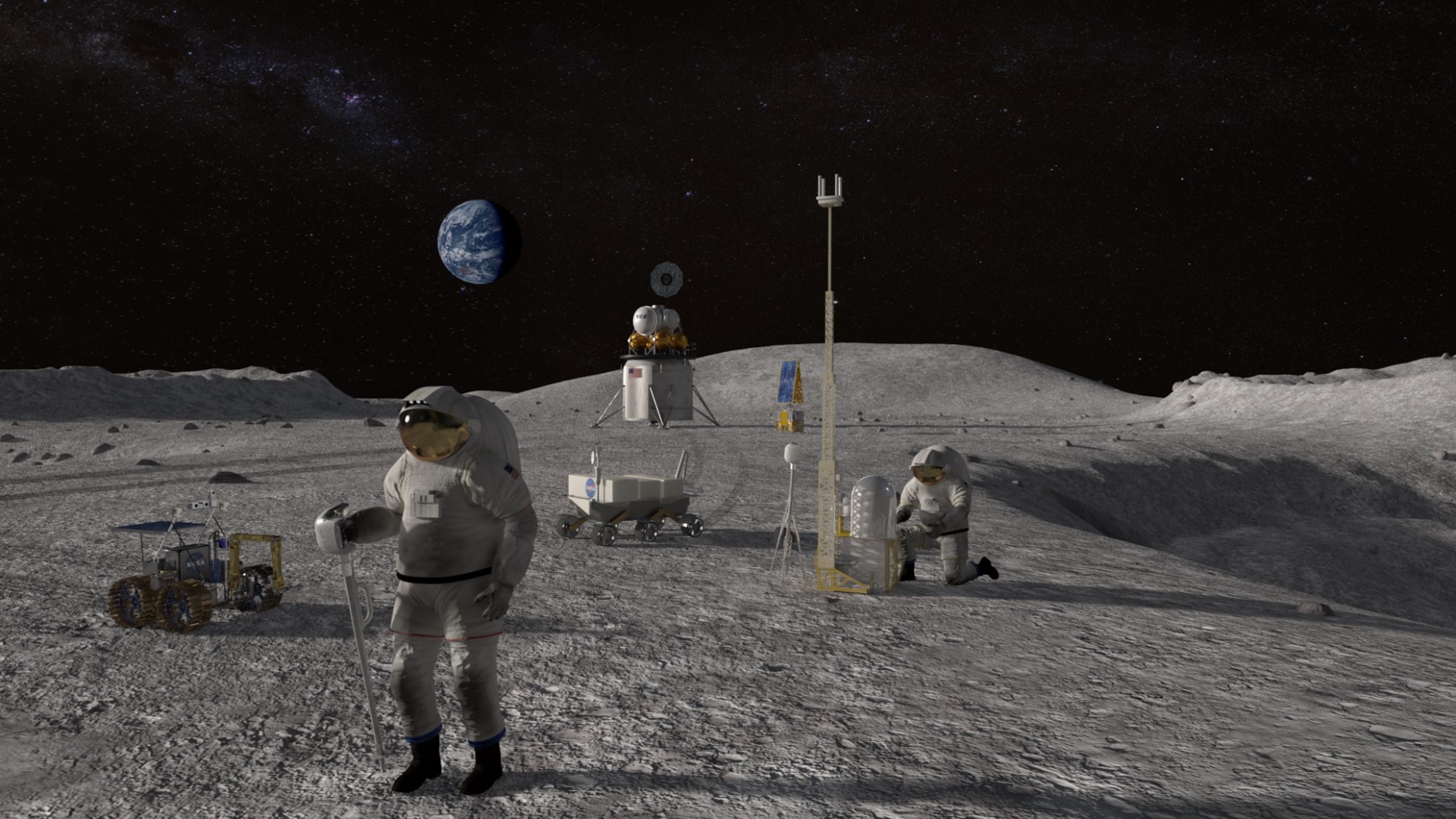 What Is The Purpose Of The Artemis 1 Mission?

The Artemis I mission is just the beginning of a program that will aim to bring humans to the moon and eventually land crewed missions on Mars.

What Is Unique About NASA's Upcoming Artemis 1 Mission?

It takes Artemis I 1.3 million miles (2.1 million kilometres) to get to, past, and back from the Moon. It will test both the Orion spacecraft for crewed missions to the Moon and NASA's new heavy-lift rocket, the Space Launch System (SLS), the largest rocket ever built.

How Long Will The Artemis Mission Last?

If it successfully launches, then the Artemis I mission will last for 38-42 days, with a splashdown off the coast of San Diego, California in the Pacific Ocean on October 11, 2022.

The NASA Artemis 1 mission is only the first phase of a program that will eventually aim to send crewed trips to Mars and return people to the moon. Nelson says that the problems that happened during the first two scrubs did not slow down any of the other Artemis program missions.