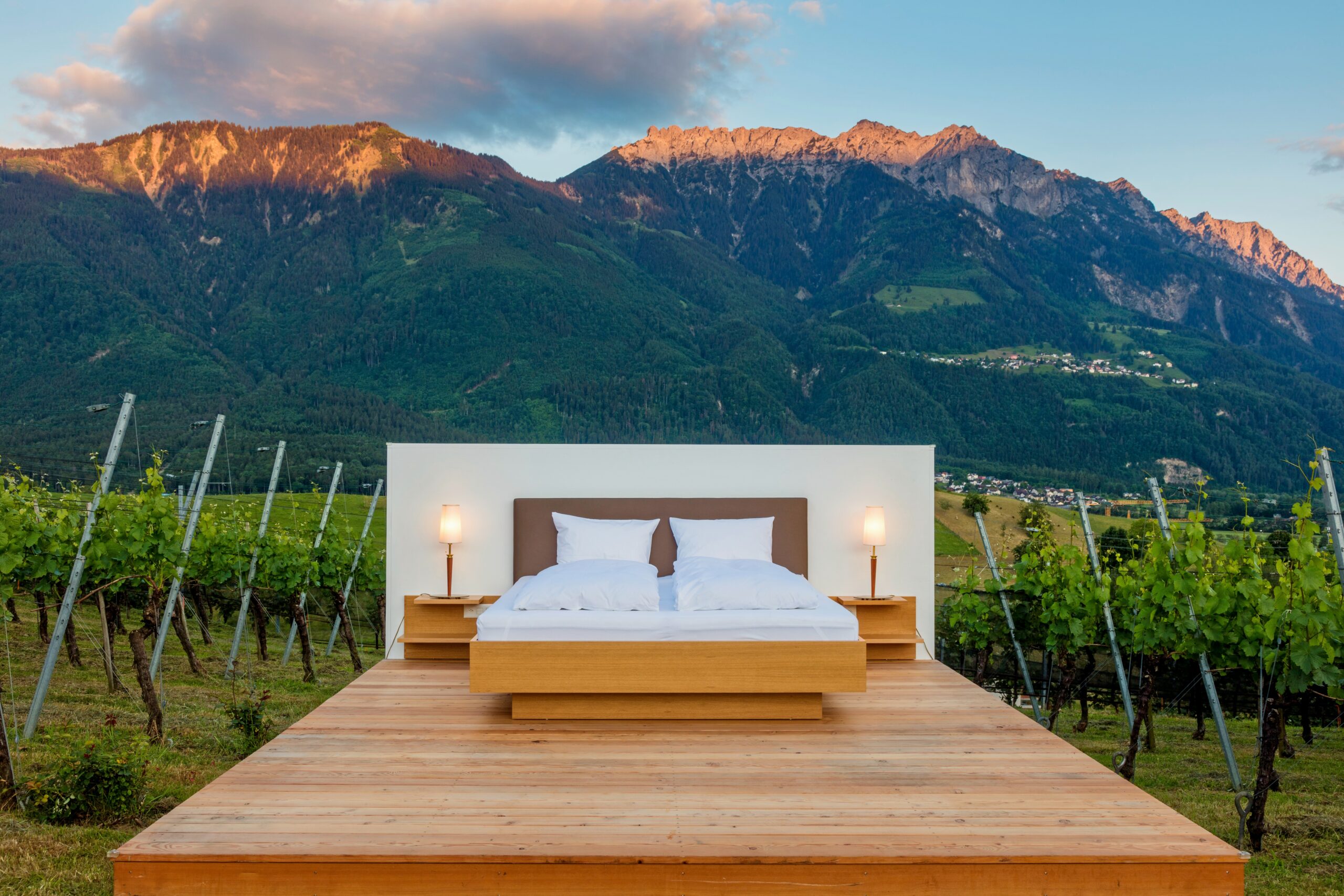 Frank and Patrik Riklin, two artistic business brothers, created the concept hotel known as The Null Stern hotels. It operated from 2009 to 2010 for a single year before becoming a museum. Null Stern translates to "no stars." This is not to say that it is bad; just the contrary.

The only thing it has is a bed with linens, and it's in the middle of the Swiss Alps. The hotel's name translates to "zero stars" in German. According to Daniel Charbonnier, a co-founder of the hotel, "each guest is the star, not the hotel." 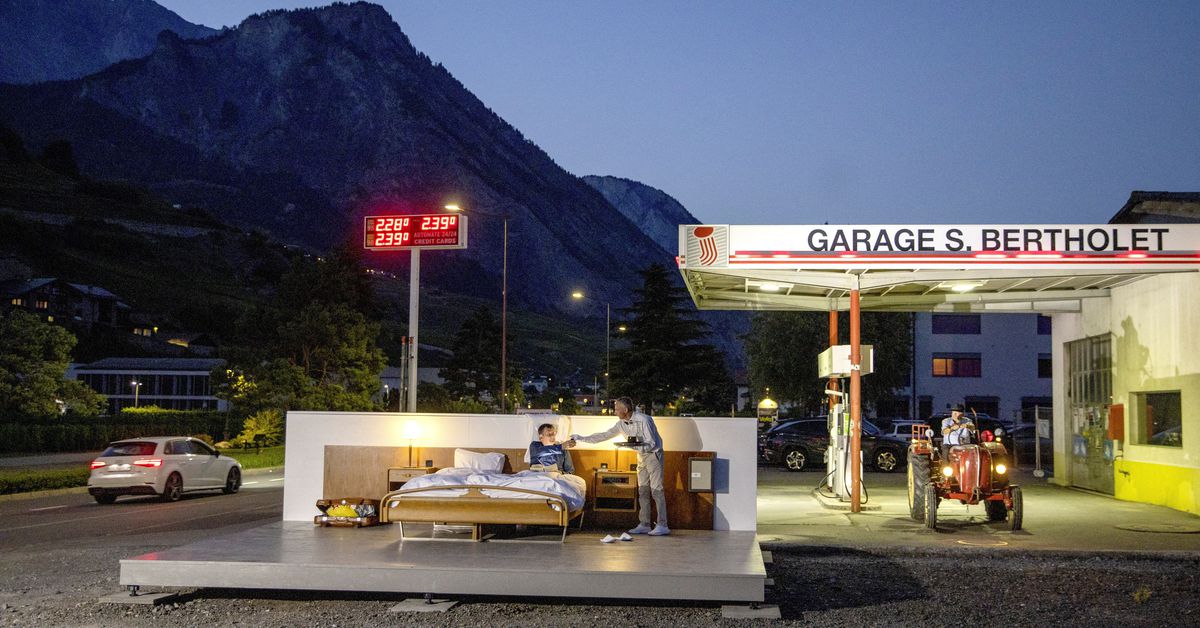 A Null Stern hotel room outside near a garage

They took down all the walls, and you and your experience are the only things left. In Appenzell, Switzerland, on the Gobsi mountain, Null Stern opened its second bed at the beginning of June. When it first opened in July 2016, it only had one bed.

The name is intended to be a parody and critique of the overly fashionable, ultra-trendy hotels that are currently popular throughout the world. The phrase "the only star is you" highlights your participation in this live piece of art as well as your status as a visitor.

It is housed in a former nuclear bunker in Switzerland that has two-foot blast-proof walls and doors. And if you think this is a bit excessive, you're in luck—a butler is on call around-the-clock to attend to your requirements and serve you coffee.

This former fallout shelter received a nomination for a World Hospitality Award three months after it opened. After permanently closing as a hotel in 2010, Null Stern sadly only remained open as a museum. However, similar projects are set to open in abandoned metropolitan areas all around the world. 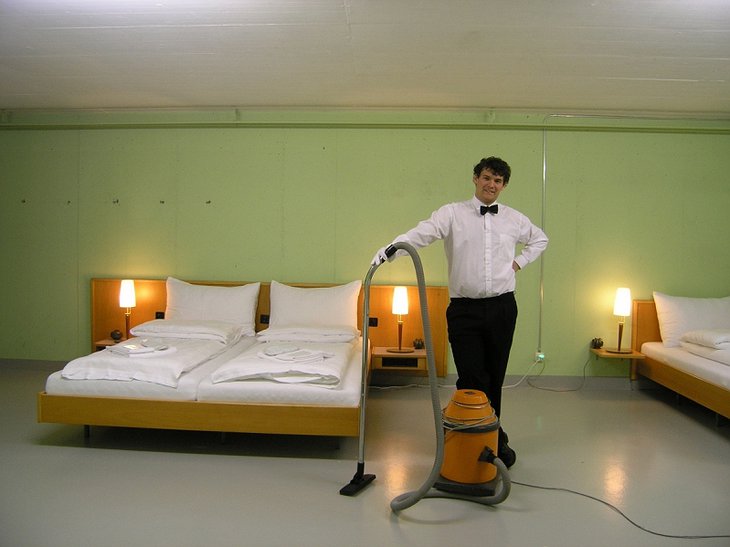 A staff member in the Null Stern hotel room

In a manner, hotel rooms without walls can be fancy, according to Architectural Digest, if they're located in the correct area. Charbonnier said,

“Although the hotel lacks many common amenities, guests may find comfort in an on-site butler who will play a ‘central role,’ in the experience, according to [hotierl Daniel] Charbonnier. Null Stern’s slogan, ‘The only star is you,’ is a key philosophy at the alternative accommodations, where the founders strive to put the guests at the center of the stay. At all of the zero real estate suites, a butler provides meals and facilitates other requests from guests during their stay. At the anti-idyllic suite, the butler ‘provides a sense of security and care in an environment of insecurity."

The idea was first introduced in 2009, but it really started to gain attention in 2017 when their suite in the Swiss Alps gained a reputation for having a long waitlist (it's currently up to 6000 people).

In their open-air apartments in the Swiss Alps, guests may be the sole "star," but you can still see a lot of them. But it all started out as something a little less glitzy than alpine glamping.

You can book the Null Stern hotel for your stay at uniqhotels.com, thrillist.com, nullsternhotel.ch, etc.

I stayed in the Null Stern suite Bayart, and my pros and cons are listed in more detail below:

Pros: It’s simply beautiful. The location, the bed and the backdrop, the views etc - I mean, just beautiful. If you love walking, hiking etc, Saillon (the area is amazing). If it gets too cold, warm etc - and you need a shower, there’s a room booked in the Bain de Saillon hotel. However, note that you cannot use both - you can either use the bed outside or the room inside the hotel. There is a lovely church just below with a small nice garden - which added a nice touch to everything.

However, cons / things to note: You have to walk up a little hill to get there - so, take appropriate shoes, not too heavy of a luggage etc (but then again, it’s only a little hill). The toilets are down the hill and not "steps away from the bed" as stated when we booked the room.

So I advise to use the toilet anywhere you find them in (restaurants, bars etc) - before climbing back up / going to bed. There was no water anywhere - so, bring bottles of water to wash your face, teeth, keep hydrated etc. However, you are provided with one bottle of water, but honestly, it was not enough.

But all in all, I loved this experience. It was new, it was exciting, it was adventurous, and if you can experience it, do.

What Are Null Stern Hotels in Switzerland?

A nuclear bunker that has been turned into a hotel is called the Null Stern hotel. A prototype debuted on June 5, 2009, in Teufen, Appenzellerland, Switzerland. In June 2010, it underwent a transformation to become a museum.

What Is A Zero Star Hotel?

A hotel room outside, where sleeping might not be possible. The Riklin brothers call this project "an anti-idyllic variant" of their "Zero Star Hotel," which is German for "zero star."

What Is Null Stern Hotel Price For A Night?

There are so many unusual hotels that rethink the typical B&B, from a lodge carved out of ice to one made of metal sheets. One open-air hotel, Null Stern, does away with both walls and roof completely. There, staying is similar to camping.