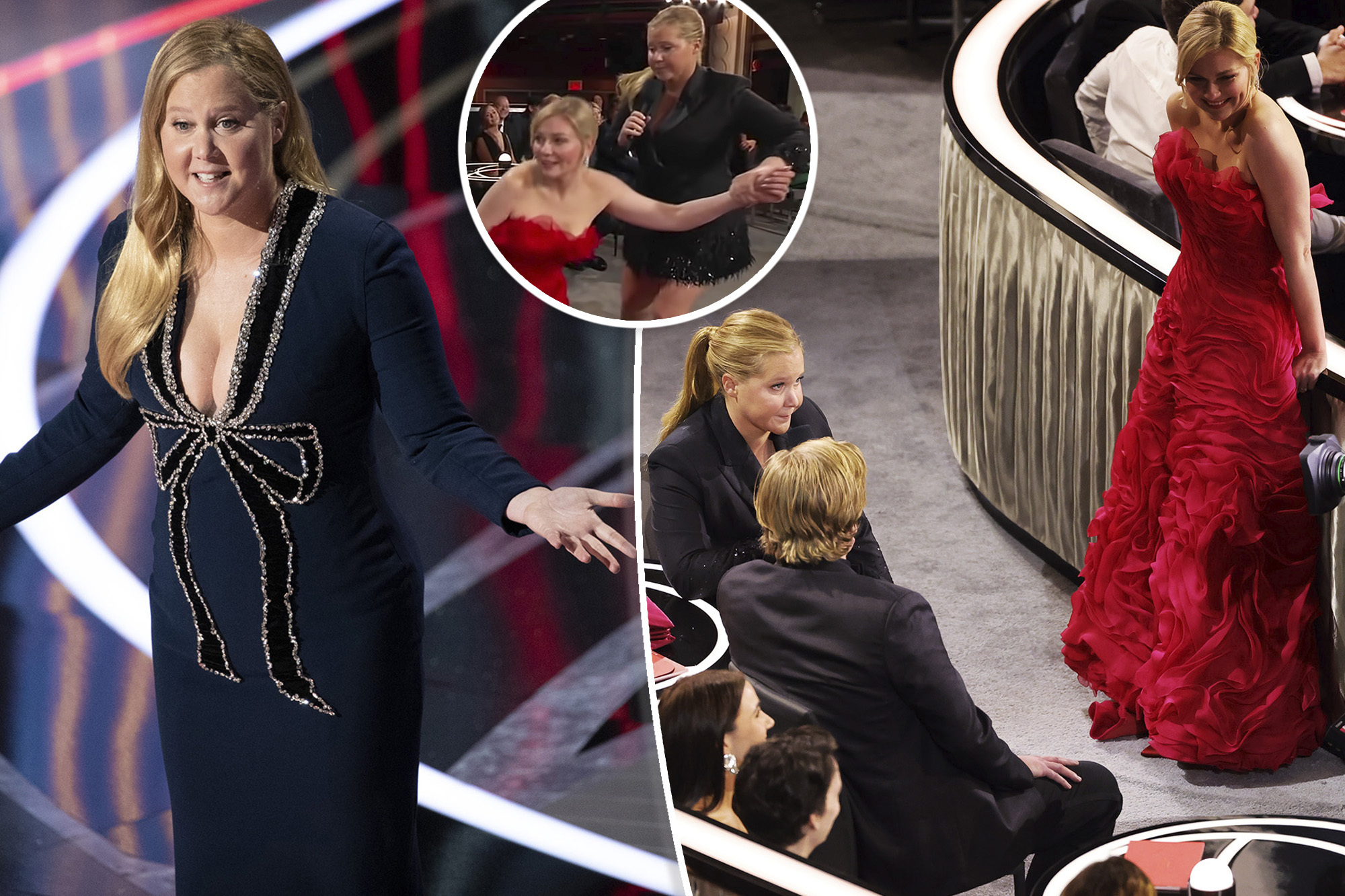 Oscars seat fillers 2022 - Amy Schumer, an American stand-up comedian, and co-host of the Oscars made a joke about Kirsten Dunst being a "seat filler," which refers to a person assigned to fill seats when a famous celebrity is elsewhere in the middle of the program. Because of this scenario, many online users thought voice out their criticism online. How did Amy Schumer react to what people said about her? Continue reading to learn more about the Oscar seat fillers 2022 behind the scenes.

At this year's Academy Awards, Chris Rock wasn't the only comic to make a joke that resulted in an extremely embarrassing situation for the audience.

Before this, Amy Schumer try to explain and show people what "seat fillers" are. She spotted two celebrities sitting. She then approached Jesse Plemons, the actor of "The Power of the Dog" and a nominee for Best Supporting Actor, who was seated next to his wife, Kirsten Dunst, who was also nominated for the same film. Dunst was also up for the same award.

Schumer said: "OK, here’s a seat filler. Honey, can we get you up, honey you want to go to the bathroom?" then she grabbed Dunst's hand and pulled out of her seat.

After that, Schumer moved over to the seat previously occupied by Dunst and leaned over to talk to the actor in "The Power of the Dog".

"Jesse I loved you doing 'Power of the Dog,'" Schumer said.

Then, Jesse replied to Schumer: "You know, that was my wife, Amy,"

Schumer feels a little bit of awkwardness while asking Jesse: "Are you married to that seat fillers?"

To see the full conversation on this awkward moment of Amy's Seat filler segment, here's the video below.

Meanwhile, many people criticized what Amy Schumer did during seat fillers. They said that she is disrespectful to the real couple Jesse Plemons and Kirsten Dunst. You might also ask: "Is there a possibility that this seat filler is scripted and rehearsed?" As a matter of fact, the answer is "yes." It is rehearsed.

Greg Prince: "More awkward moments at the Oscars: Amy Schumer, with one of the most unfunny jokes of all time, moved Kirsten Dunst out of her seat, calling her a "seat filler," prompting husband Jesse Plemons to say "you know that was my wife?" 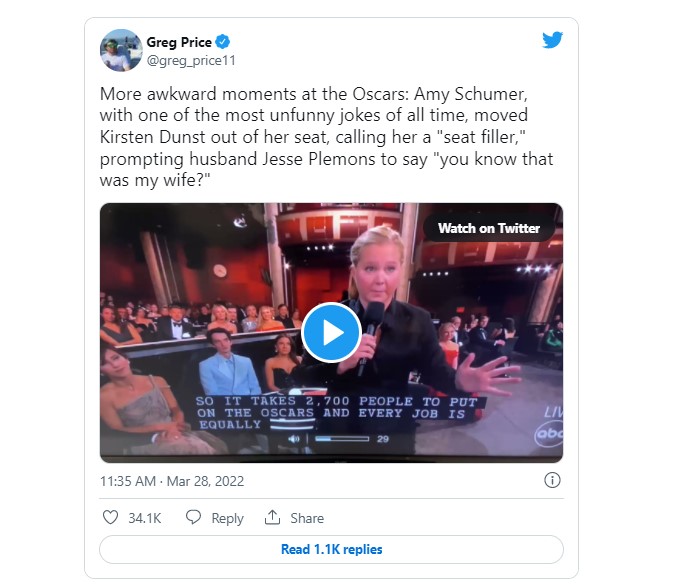 Kate posted: "Amy Schumer calling Kirsten Dunst a seat filler and then flirting with Jesse Plemons just pissed me off, especially since Kirsten has been made fun of before by other people in the industry" 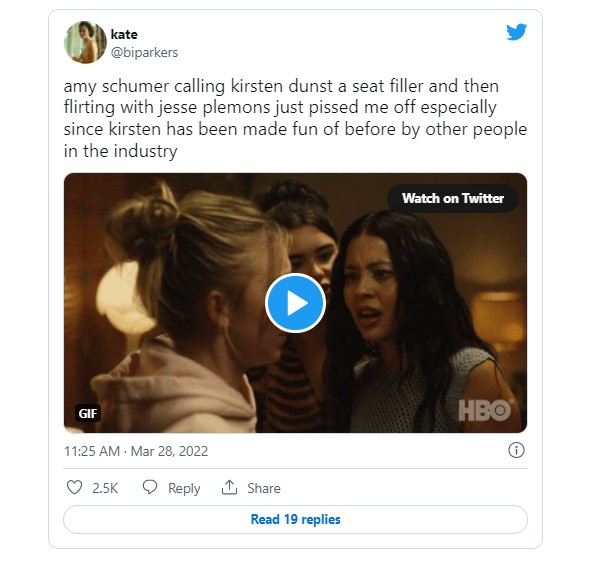 Kate posted her thoughts on Twitter and shared a video

Lately, u/Gato1980 posted: "Amy Schumer Says Kirsten Dunst ‘Was In On’ Oscars Seat Filler Bit After Receiving Backlash For The Joke." You can read the comments that people of Reddit have made about this second iconic scene below, which occurred during the Oscars in 2022.

Presto2001: I can’t believe there are people that think this was real and that the Will Smith thing was staged.

ArthurMorgan1874: Anyone who thought it was [funny] really needs to a long, hard look at themselves in the mirror and say “I’m a fucking a moron.”

bw1030: For me, it isn't the "disrespect to Kirsten Dunst" it's the fact that Schumer stole the joke (big shocker) from Neil Patrick Harris when he did it at the Oscars 7 years ago. Except when Schumer did it, she performed it in such an uncomfortable and comedically tone-deaf way that it rubbed a lot of people the wrong way. So basically she stole an old joke, tried to rework it to seem original, but ultimately made it so much worse and drew backlash.

Rafael C. C.: "Dunst has always proven to be a very classy person. Very respectful and down-to-earth. No matter if Dunst was in on the joke, this year's jokes were the worst, only matched by the lack of organization and selfish attitudes of presenters. I miss the old times (three years ago far enough). The Oscars were classy, jokes were limited, and people went there to the Oscars, not to a circus."

BlueHeavenly Lennard: I am convinced that expressing outrage is a national pastime now.

A certain user under the username addiat meikokusuma also said,

Even Kirsten was laughing. People need to take a chill pill...Goodness. Relax, it is a harmless joke.

Francis Xavier: "This bit was actually so fun, would have been fun to do one early as well maybe spotlight more tables. Did you see Diddy at Billie Eilish's table haha. Otherwise, if its choreo'd, there's no harm as always."

Amy Schumer claims that she was the target of death threats following a joke she made about Kirsten Dunst's role at the Oscars as a seat filler.

Schumer expressed to Howard Stern in an interview, "I did a bit with Kirsten Dunst and Jesse Plemons that was completely orchestrated. We talked beforehand, and we all worked it out together."

She clarified that she had contacted anyone who she intended to make fun of during the performance in advance to inquire about whether or not it was acceptable to do so.

But in the days after the Oscars, Schumer began to receive death threats because of the joke. She claimed that many people were upset with her because she disrespected Kirsten Dunst in that way.

She claimed that there were so many threats and that they were such a sensitive matter that the Secret Service got in touch with her.

After hearing that Schumer was being threatened because of the joke, Dunst reportedly sought to alleviate the situation by disclosing that she was aware of it.

The comedian and the senator from New York are distant cousins. Following a shooting at a screening of the actress' film, Trainwreck, in Lafayette, Louisiana, in 2015, the two joined forces to advocate for tougher gun-control regulations.

Yes. He is Chris Fischer. In fact, her husband is a well-known chef and farmer in the United States, hailing from the island of Martha's Vineyard in Massachusetts.

What Is Amy Schumers Net Worth?

She became well-known in the United States because of the sketch comedy television show titled "Inside Amy Schumer," which she both produced and hosted. Amy Schumer's net worth is estimated to be at $25 million as of the year 2022.

Why Do They Have Seat Fillers?

The primary purpose of hiring seat fillers is to ensure that there are no vacant seats visible in audience images captured by television cameras.

Thank you for reading this and the author really appreciates your time while reading this post about the Oscars Seat fillers 2022. During a bit on the show, the comedian and co-host of the 2022 Oscars were criticized for joking that the actor in "The Power of the Dog" was just there to fill seats. Amy Schumer wants everyone to know that she would never disrespect Kirsten Dunst. To those people who are mad at the comedian, please don't take it so seriously, it was scripted.