Oxford Dictionary Chooses ‘Goblin Mode’ As Its Word Of The Year 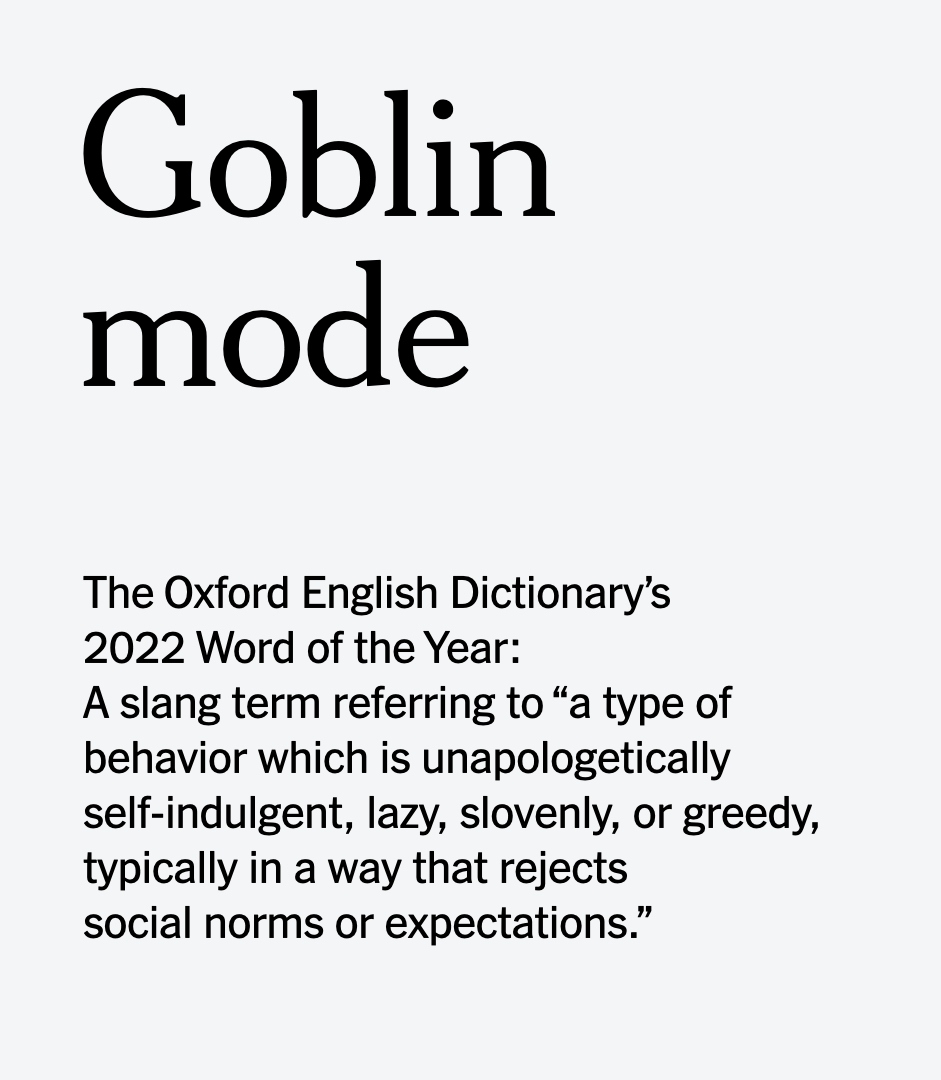 Oxford Dictionaries chooses ‘Goblin Mode’ as its word of the year. The public has selected that phrase when asked to describe 2022 in one word.

In the definition, a term is described as "a form of behavior that is unrepentantly self-indulgent, indolent, slovenly, or greedy, usually in a way that opposes social standards or expectations."

Given the year we’ve just experienced, ‘Goblin Mode’ resonates with all of us who are feeling a little overwhelmed at this point.

The purpose of the word of the year is to summarize "the ethos, mood, or preoccupations of the past twelve months."

Goblin mode, metaverse, and the hashtag "IStandWith" were the three finalists chosen by Oxford Languages lexicographers, and this year's winning phrase was for the first time decided by public vote.

Goblin Mode was the clear favorite, garnering 93% of the more than 340,000 votes cast despite being relatively obscure offline.

The decision is more proof that the world is not stable after years of pandemic unrest and the big changes in politics and behavior that social media has brought about.

Last week, Merriam-Webster declared "gaslighting" to be the word of the year. This psychological trick aims to make someone doubt the veracity of their own ideas.

Several new terms entered the vocabulary in 2021. The five most notable words, according to the five most popular dictionaries, were, nonetheless, vax, vaccine, perseverance, NFT, and allyship.

Due to how frequently it was used in 2021, "Vax" was selected by Oxford Languages as the word of the year. In comparison to the usage at the same time last year, this word's usage climbed by 72 times by September 2021.

Vax is a colloquialism that means "vaccine or vaccination as a noun and vaccinate as a verb."

Merriam Webster named the word "vaccine" its "word of the year" in 2021, and said that since the COVID-19 outbreak began, interest in the phrase has been particularly high. From 2020 to 2021, Merriam-Webster reported a 601% increase in the word vaccination.

Vaccine is defined as, "a preparation of deceased microorganisms, living attenuated organisms, or living fully pathogenic organisms that is administered to develop or artificially improve immunity to a particular disease. It has been redefined by Merriam Webster.

Oxford Dictionaries chooses ‘Goblin Mode’ as its word of the year. "Goblin mode," which was first seen on Twitter in 2009, became more well-known in 2022 when people all over the world were still scared after coming out of pandemic lockdowns.