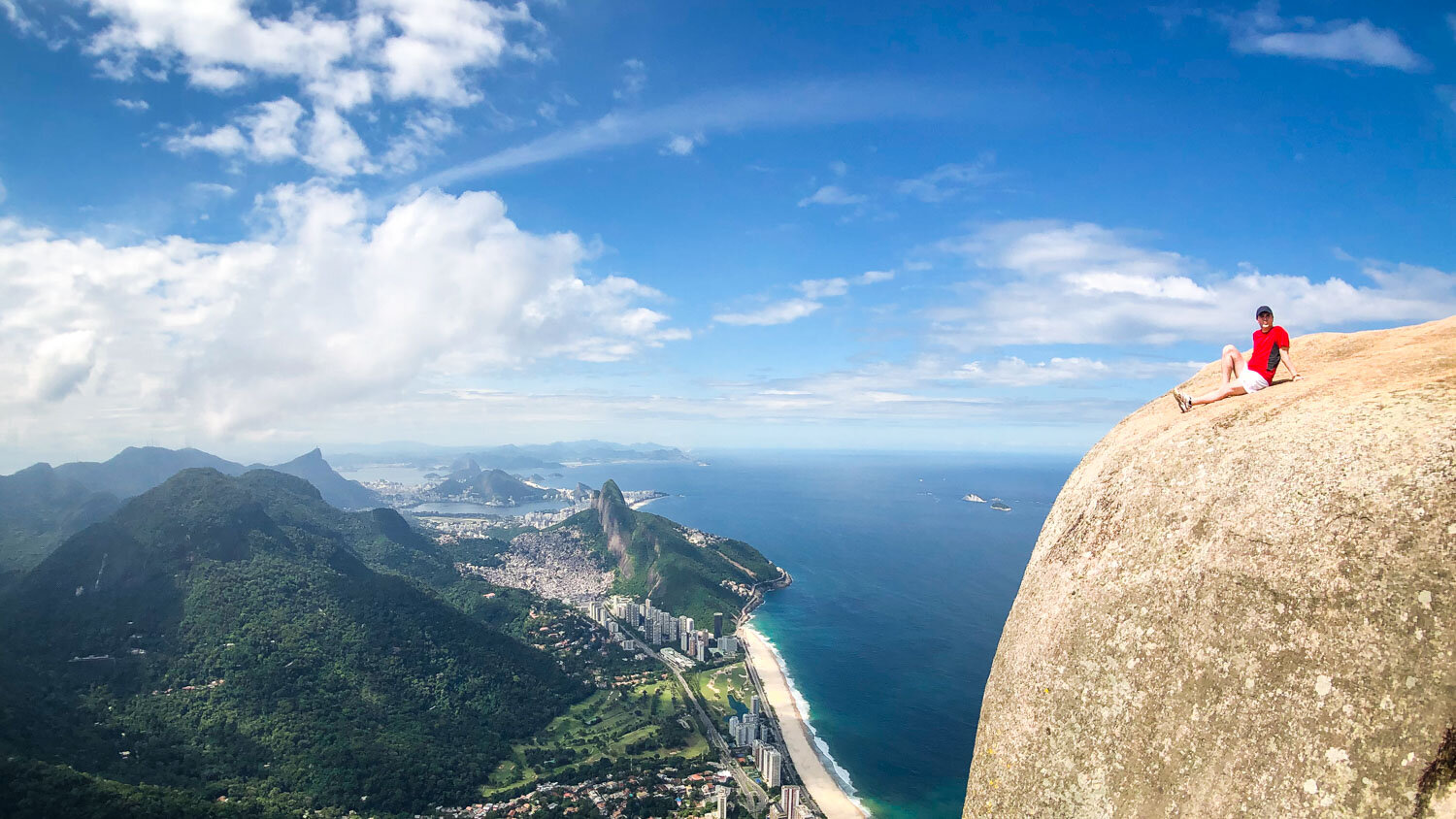 Just watch how the woman in the video is sitting over the edge of the cliff. In the background, you can hear a man saying, "More! Come on!"

Without a second thought, the woman further edged herself out on the cliff. That is very dangerous!

A person on Reddit, QualityPies, shared, "Pedra de gavea hike. Its a really good day hike. There are plenty of online guides to read on how to do it."

A Reddit user said, "The one in the video is actually dangerous: Pedra da Gavea [you can] get seriously hurt if you slip up there.."

And yes this is one of the scariest places to go just for a good picture. People are crazy!

Reddit user, duhmbish said, "I’ve been here. The hike up is an actual BITCH but the view is so insanely worth it. Yes she got close to the edge but there’s other spots on this mountain that make it look like you’re gonna fall off in pics but you’re actually completely flat on the rocks lol it’s quite fun actually 🙂 about an hour and a half hike directly upwards. Fucking HARD for someone who had never hiked in her life before lmaooo"

The trail is a strenuous climb to the top of the world's tallest coastal monolith, and it is located within Tijuca National Park and travels through the Atlantic Forest on its way there.

It is possible to see Sugarloaf, Christ the Redeemer, the beaches of Copacabana, Ipanema, and Sao Conrado, and even the mountains of the Serra dos Orgaos from the top of Pedra da Gavea.

The mountain has a height of more than 800 meters, and the view from the peak is one that cannot be forgotten.

Reaching the peak of Gavea is a once-in-a-lifetime opportunity that should not be passed up.

When the trailhead opens at eight in the morning, they begin their journey there shortly after.

They continue to walk down the path as it meanders through the Atlantic Forest, which is a gorgeous and shady natural habitat that is home to a wide variety of plants and fauna.

The trail is really steep, and there are a lot of natural barriers and hurdles to overcome along the way.

They reach the "scramble," also known as the Carrasqueira, at around the two-thirds mark of the trip.

This is a steep, rocky portion where they must use a rope and other rock climbing equipment to get to the summit in a secure manner. The "scramble" is thirty meters long.

At this point, the trail emerges from the densely wooded section, and the scenery immediately improves.

After another twenty minutes of hiking, they arrive at the beautiful summit of Gavea, which is an enormous plateau affording views of Rio de Janeiro and its breathtaking environment in all directions.

After spending some time at the top and taking a lot of pictures, they start their descent by retracing their steps along the same path they took to reach the top.

They use a rope and a method that is quite similar to rappelling in order to descend Carrasqueira.

This allows them to complete the part in a secure and confident manner.

Even though the course is challenging, prior experience in rock climbing or trekking is not required in order to participate.

Their tour leaders will never go faster than what is comfortable for any of the participants.

In addition to this, they never leave your side and provide you with a wealth of advice regarding climbing and hiking as you go.

Scariest Place To Get Pictures

It is located around 844 meters above Rio de Janeiro.

To get to the top of Pedra da Gavea and shoot photos on the side of the mountain that are sure to have your heart racing, hundreds of people in peak physical condition and without fear have made the ascent up through the Tijuca Forest.

The trek to Pedra da Gavea can be completed in around three hours one way.

The adventure consists of both walking through the forest and engaging in some rock climbing.

But being as how not all of us are daredevils, we'll just have to settle for living vicariously through the stunning pictures that people post on Instagram because getting those pictures is just as terrifying as they look (and those who have done it have confirmed it).

It even puts Sydney's own Wedding Cake Rock to shame; however, in contrast to that location, tourists looking for an adrenaline rush are not subject to fines at Pedra da Gavea for having their photos taken on the brink of this Pedra rock formation.

Some people say it is an optical illusion but in reality, it is not. Some places on Pedra De Gavea are illusions, but the one mentioned in the above video is not an OPTICAL ILLUSION. So, it is hard to say which one is an illusion till you have not visited that place yourself.

Are There Any Pedra Da Gávea Death Cases?

There are no such death cases caused by Pedra Da Gavea hiking or from its height.

Why Is Pedra Da Gavea Famous For?

Rock of Gavea, also known as Pedra da Gávea, is one of the highest granite domes in Rio de Janeiro. It is even higher than the Corcovado, which is where the statue of Christ is located. The rock formation known as Pedra da Gávea has a face-like appearance, and some people believe that prehistoric Indians carved the features of the face into the rock.

Why Is Pedra Da Gavea Named As Gavea?

It was given this name because of its resemblance to the "Gavea," an observation basket that was mounted on the mast of Portuguese sailing ships during the 15th century.

Have you ever visited Pedra Da Gavea - a risky place to take photos before? Did you ever take photos at that dangerous cliff?

Have you heard about the Thor's well?