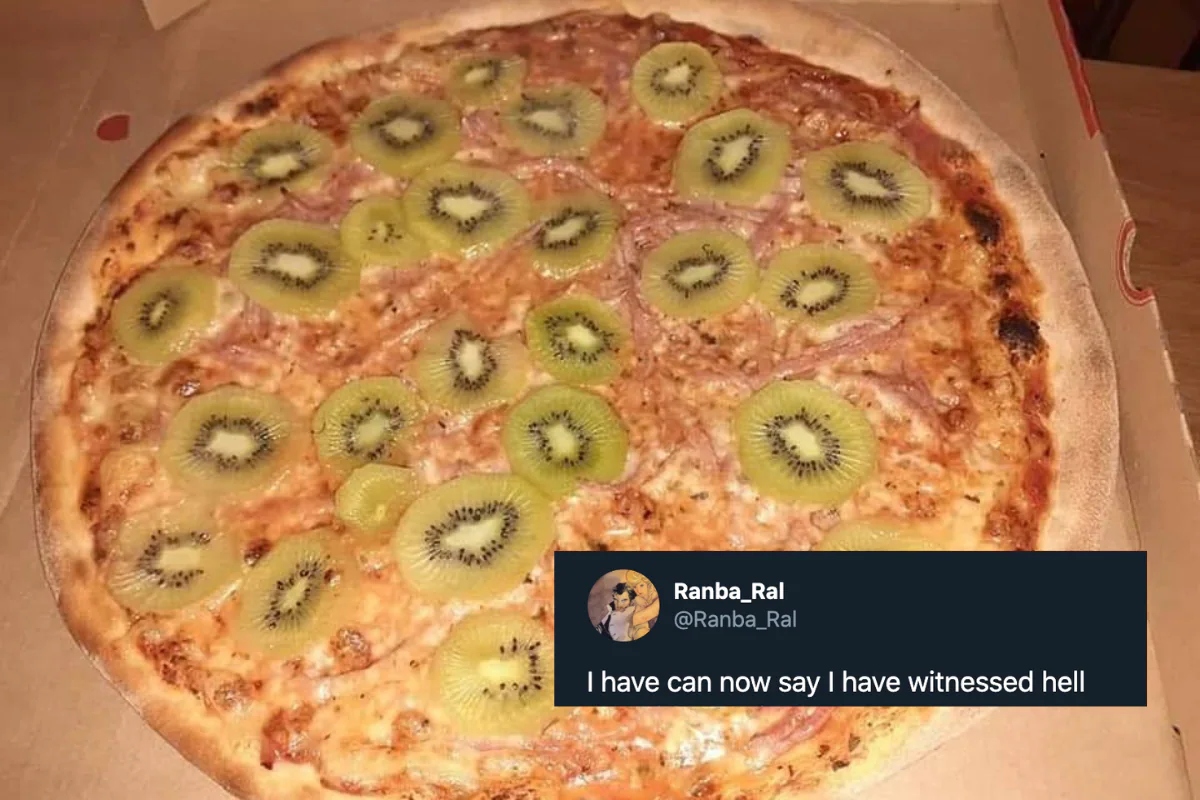 Apparently people are putting kiwi on their pizza now. Call the fuzz, ’cause this is criminal. ‘Cause kiwis are fuzzy! Whatever, I just ran that joke by my mum and she cackled. CACKLED.

If you’re one of those people that doesn’t like pineapple on your pizza, may I suggest you stop reading this article now, ’cause this story is just going to unsettle you.

I’ll rip the plaster off the rest of you: some people like kiwis on their pizza.

Would You Eat A Kiwi Pizza?

Seriously? WTF? Just when you’ve accepted that the world has gone completely f**king mad and you’ve thrown in the towel on humans altogether, someone goes and makes kiwis on pizza a thing, and makes you hate everything just that little bit more.

I mean I get how pineapple on pizza is a bit of a marmite situation, but I genuinely can’t think of one human being in my life who would want to much down on a pizza topped with f**king kiwis. Yuck.

The internet went ballistic (rightly so) when a Twitter user posted this snap of a “pizza” they was served in Denmark, while on holiday. Since then, the image has been doing the rounds online, and generally causing a s**tstorm of outrage and disgust.

Ranba_Ral (@Ranba_Ral) says, "I have can now say I have witnessed hell."

The Twitter user wrote, “This is so terrifying I can’t even type gud now. It’s worse than I thought.”

Is it just me, or do the kiwi slices actually makes the pizza look ill? Like it’s dying to be eaten and put out of its misery.

I genuinely can’t look at it for too long; it’s weirdly setting off my trypophobia.

According to Mike Moss (@_MikeMoss), "Now look where we are… Pineapple was just a gateway topping. I've been saying for years…"

Another said, “This is a travesty to pizza everywhere.”

Not Everyone Is Hating On Kiwi Pizza

Then there was this Twitter user, who saw this pizza as some sort of deity.

According to Foment Liberty (@FomentLiberty), “Sorry, but looks possibly awesome. That’s the beauty of pizza; it’s both nature’s most perfect food and comes in endless varieties.”

I’m not really meant to say this @FomentLiberty, but you’re wrong. You’re just plain wrong. I really do take personal issue with this. Why on earth would you combine two delicious treats (I love kiwi on its own!) to create something so unholy?

I’m still not really over the likes of gammon and pineapple and fried Mars Bars, but I’ve had years to get used to those. This is just so fresh and sudden.

What do I know, though? I sometimes put ice cubes in my cereal to make the milk colder. We all have our thing.

I’m sorry. I know I’m meant to stay relatively impartial as a journalist, but just look at it. It’s going to haunt my dreams tonight, I just know it.