People Have Been Queuing Outside IKEA Since 5:45AM

People have been queuing outside IKEA stores in the UK for hours, with crowds of people being spotted at the furniture shop as early as 5:45am.

It’s madness. It really is. I’m a big fan of the Swedish furniture brand and any other day of the year, visiting is a good day out for me. Going around looking at the taps, moving them around a bit, checking if the laptops they have lying around really are fake. It’s all great.

Despite that though, you really would not catch me queuing up outside an IKEA at 5:45am on a Monday, no matter how long it had been before I last visited one.

Firstly, I have a job and I don’t really want to use my holiday up for that and secondly, that’s just stupid. No-one needs furniture that urgently. No-one at all. Maybe if you’re one of those lion tamers who need a chair, but other than that then no.

Last week IKEA announced that they would be reopening a number of stores in the UK from the first of June with reduced hours, enhanced cleaning and safety precautions, and social distancing rules in place, and today saw that come into fruition.

With the reduced hours, the stored now open at 10am, but that didn’t stop people getting there over four hours in advance; like they’re getting a new iPhone or something. The news found its way over to Twitter, where people joked:

“Ikea Exeter re-opened today. Just took my friend there to start her new job. The car park is full, very long queue to get in the building. What is so important and urgent to make you want to queue for ages to get into Ikea FFS?” 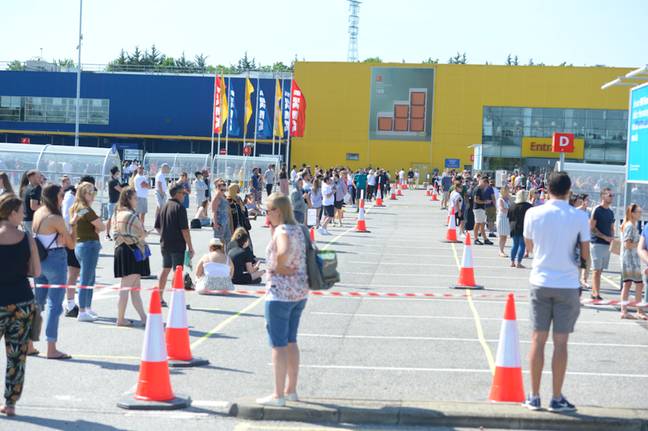 Meanwhile, as they manage the reopening, IKEA wrote:

“To ensure a safe shopping experience we ask that if you can, please shop alone.

“Only bring one other person from the same household, if you need special assistance or if you need to bring your children with you.

Wednesbury’s IKEA reopens at 10am today and the queue is already across one side of the car park. I spoke to one customer who started queueing at 5.45am this morning – she is now first in the queue pic.twitter.com/mLp4uqEnA4

The (almost) never ending queue outside Ikea in Belfast as the flat pack lockdown is lifted. @PA video by @Razorpix pic.twitter.com/Qo6ecHxBkG

“There will be a queuing system outside to manage entry into the store.

“We’ll have co-workers and signage throughout the store to help you stick to social distancing guidelines“.

Right I have to go now. I need to get a BEKVÄM and fast!