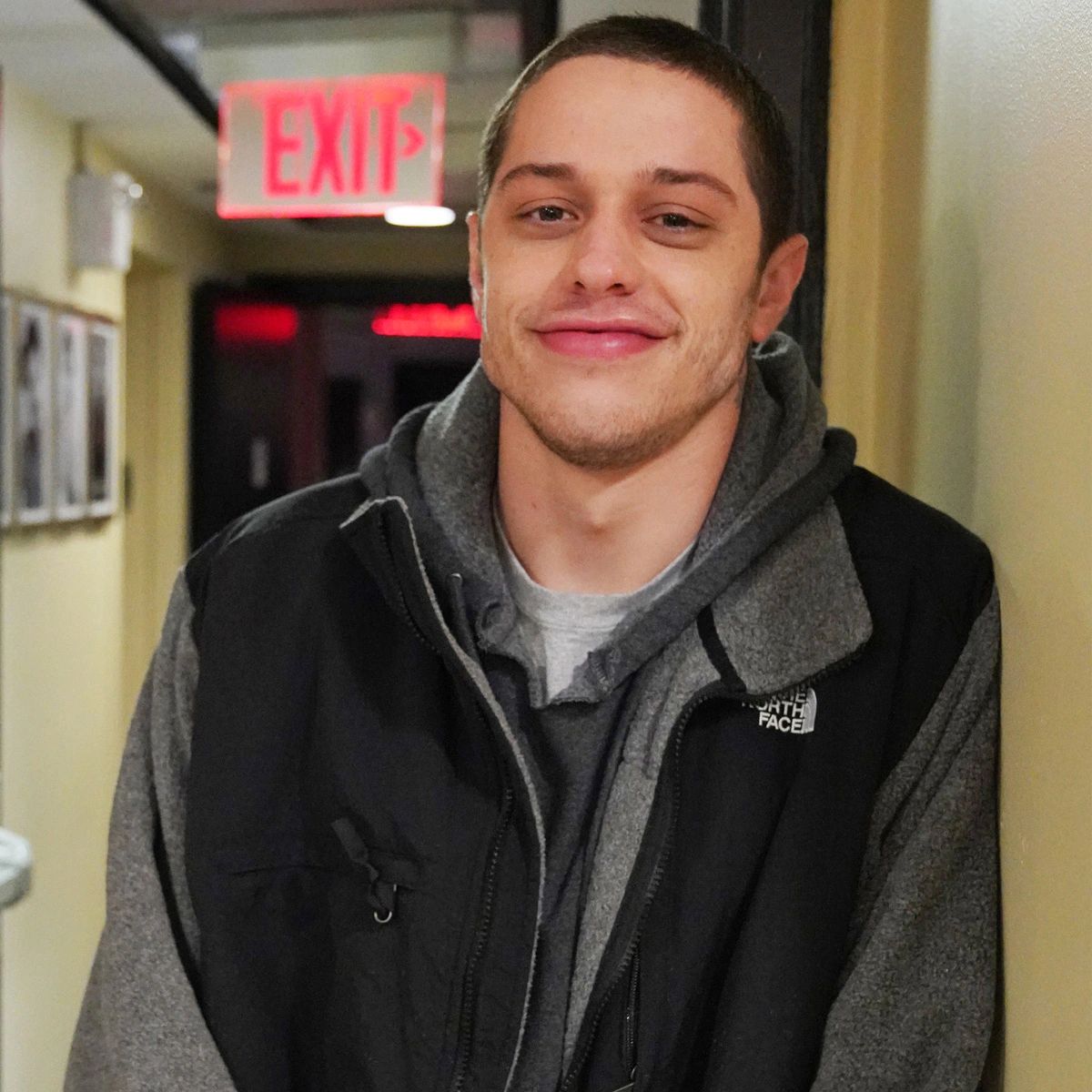 Many of you don't want to talk about your old flames because you recall how their names and reputations were damaged.

Interestingly, Pete Davidson's name has been connected romantically to a diverse group of A-list actresses and models in Hollywood.

The "Saturday Night Live" comedian seems to like famous women of all ages.

Cazzie David, Ariana Grande, Kate Beckinsale, and many more personalities are evidence of his past relationships.

Kim Kardashian said that she went after Pete Davidson because of his "big d*** energy."

She said that she felt a real spark between them when they kissed on-screen as Jasmine and Aladdin.

Unfortunately for Davidson, their romance did not last and he is once again a bachelor. 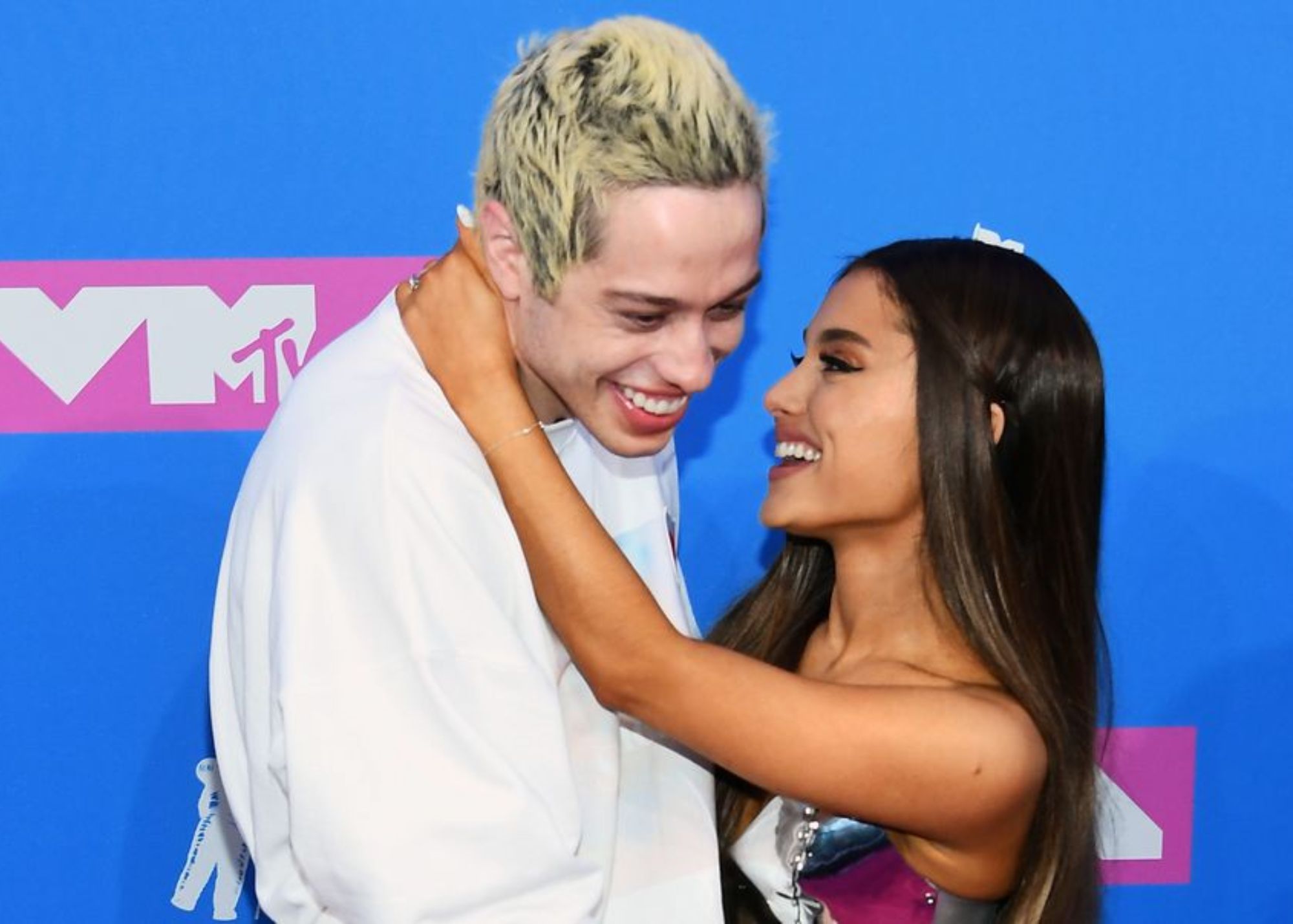 Due to her musical talent and role as one of the coaches on The Voice singing competition, Ariana Grande is a well-known figure who is well-known throughout the world.

You could ask right away, "Why Did Ariana Grande and Pete Davidson Split and End Their Engagement?"

Ariana Grande and Pete Davidson had a fast-paced relationship in 2018, and by the end of the year, they were engaged.

A month after the end of their relationship, Ariana Grande released the song "Thank you, Next," which became an enormous commercial success for her and broke numerous records on YouTube.

The high-profile engagement between Davidson and Grande lasted only about five months before it was called off in October of 2018.

My friends were like, 'Come! We're gonna have a fun summer.' And then I met Pete, and it was an amazing distraction.

The singer went on to say:

"It was frivolous and fun and insane and highly unrealistic, and I loved him, and I didn't know him. I'm like an infant when it comes to real life and this old soul, been-around-the-block-a-million-times artist. I still don't trust myself with the life stuff."

On the other hand, Davidson is aware that he became engaged in a very short amount of time and said:

"He really always gives me the best advice. I called him when I got engaged. I was like, 'Lorne, I just got engaged to Ariana Grande after dating her for two weeks.' He goes, 'Oh, well, hold on for dear life.' It's a true story."

After that, he said that he knew the relationship was over when the news came out that Miller, Ari's ex-boyfriend, had died.

Ariana had a two-year relationship with Mac Miller before she started dating Pete Davidson in September of 2018.

Pete discussed the effects of his untimely death on his relationship with Ari.

Additionally, he assured her that he would stay by her side until she felt safe.

To which he added, "I think I said, I'll be here until you don't want me to be here."

He continued, "I pretty much knew it was around over after that," indicating his certainty that the relationship had ended.

They broke off their engagement and relationship in October of 2018 after only five months of dating.

Ariana Grande will explain in the video below why Pete Davidson was such a toxic influence on her.

"He’s toxic because he makes jokes about their relationship.. I guess people don’t realize he’s a comedian."

The fact they say that Pete is toxic when he was completely in love and even got his carer trashed; is just heart breaking. Ariana lied about a lot of things, and we should all know that by now but the fact that she says each person she dates is toxic is crossing a line. She knows-hell the whole world knows-that Pete struggles with his mental heath yet she still shits all over him and is still trying to completely demolish his carer.

If their relationship was toxic, it wasn't because of them. it was because it was unrealistic and rushed. im sure they loved each other very much but it wasn't the right time and it wasn't happening for the right reasons. also ariana literally didn't say anything about pete being toxic in the video, this is clickbait. besides, ariana's literally MARRIED now, stop obsessing over her past relatioships.

Back in 2019, Beckinsale and Davidson had a brief fling together.

In January, during the afterparty for the Golden Globes, the two people met for the first time.

Three months later, they decided to end their relationship.

During the time that they were involved, reporters asked Beckinsale to describe the man of her dreams, and she responded as follows: "Funny. I like funny."

This is what ENews, your go-to source for celebrity news, entertainment news, and gossip about famous people, had to say:

Kim thinks Pete's hilarious. Pete is quite the charmer, and she totally understands the allure. Kim loves that they just laugh the entire time they are together, and she is really enjoying hanging out with him.

The entertainment news website Page Six reported on January 8 that Beckinsale and Davidson were seen leaving a Golden Globes after-party together.

Kate's hand was on his knee as she giggled at every one of his remarks.

In an interview for the Los Angeles Times in March 2019, Beckinsale said:

"I've never been in this position before - never dated anybody who comes with their own bag of mischief. It's all quite shocking, and something to get used to. I think if you liked the person less, you would bow out of it. If that were the main thrust of the relationship, there would be a problem. But it's not."

The age difference between Beckinsale and Davidson contributed to the uproar surrounding their romance.

When he started dating Kim Kardashian, everyone was confused as to how he got so many beautiful women.

He seems like he has an easy going personality and good sense of humour and that's attractive. Plus, I don't find anything wrong with his looks. Too much focus on their age difference and looks. Maybe their personalities just mesh. Pete and Kate, all the best. 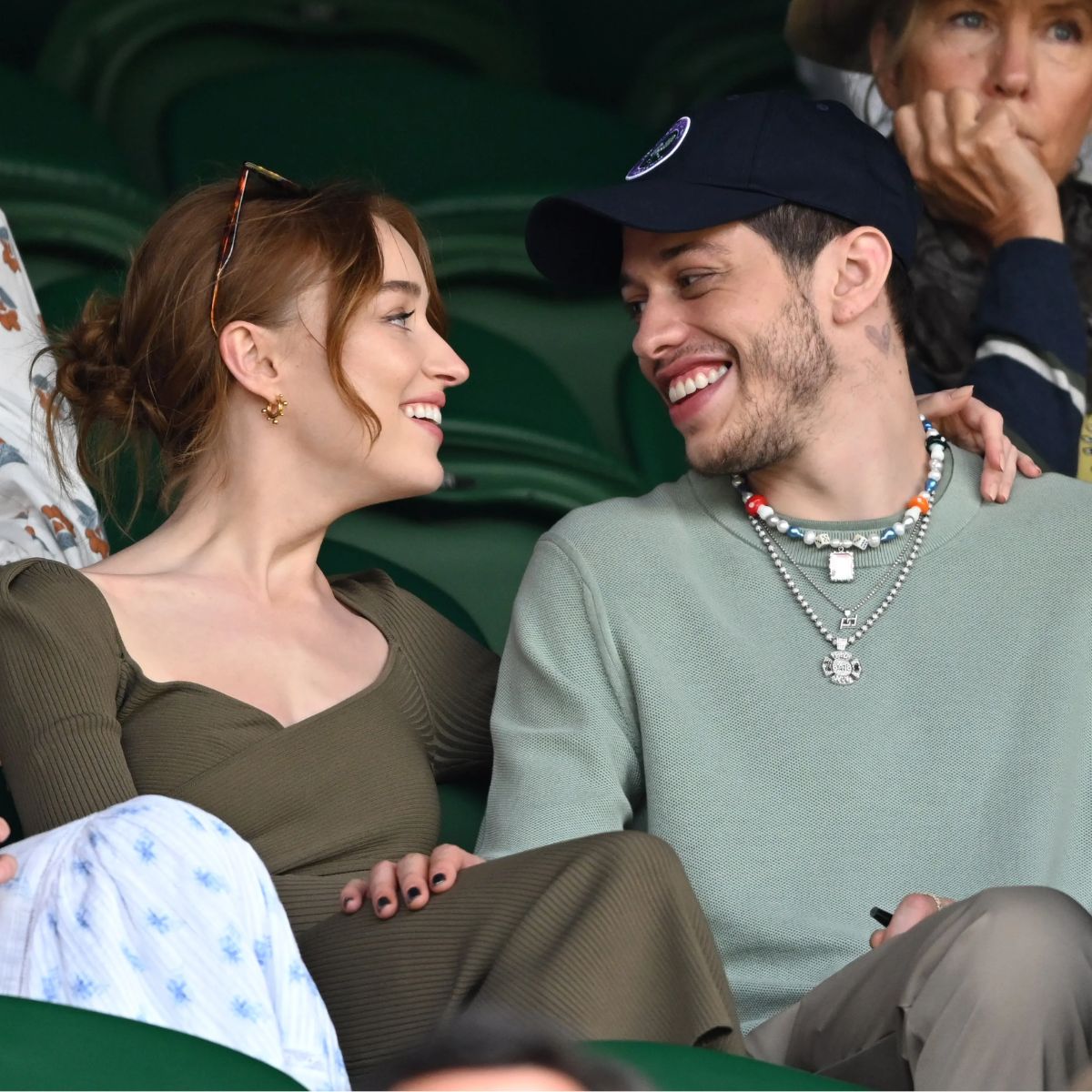 Pete Davidson and Phoebe Dynevor looking at each other

It was in March of 2021 when Pete Davidson and Phoebe Dynevor, who starred in "Bridgerton," started dating.

In the weeks that followed, rumors about the two kept going around.

Fans with keen eyes noticed that they seemed to wear the same necklace with their shared initials, "PD," when they went out on their own.

Residents of the English town of Caverswall in the county of Staffordshire said they saw the couple walking together.

They walked past our house and I recognized him immediately ... I hadn't seen anything written about Pete being in a relationship with Phoebe, but once I saw them together I thought, 'Maybe they are?'

People first heard that Davidson and Dynevor were dating in March, when the actor was seen in Manchester, England, where the actress was born and raised.

It would appear that Pete has validated the rumors that he is dating Phoebe.

Davidson was asked who his favorite celebrity was by students from Marquette University while they were talking to him online.

He said, "I'm with my celebrity crush" and then added, "That's all I can say."

And now that he's been with Phoebe Dynevor for a while, he's told her the one thing that makes all his relationships work.

I am just very, very honest ... I think what a lot of people do is they try to put on - not even their best self - but like, almost a version of themself that they would like to be. And then eventually, that will unravel, you know?

He stressed the importance of open dialogue in his personal relationships and said he wasn't interested in "playing any of the games."

Dynevor couldn't leave England for filming because Davidson stayed in New York. This led to the couple breaking up in August 2021.

It seems that Phoebe and Pete broke up because of the difficulties of being in a long-distance relationship.

Because of the ongoing coronavirus travel restrictions, it was probably harder for the couple to see each other.

Pete Davidson is Ready for Marriage and Kids with Kim Kardashian?

After she hosted the show in October 2021, Pete Davidson started dating Kim Kardashian.

Since Kardashian made it Instagram official between her and Davidson in March 2022.

Kardashian must have been into the relationship, too, because she and Davidson made it official on Instagram in March 2022, and Davidson got several tattoos to honor both her and her children with Kanye West.

Even more, "Kim" was branded on Davidson's chest.

During the interview, Kardashian's whole family was supportive of Davidson and said how great it was to see her so happy and at ease.

Khloe Kardashian said. "Pete just brings out the simplicity in her."

But in August 2022, after being together for eight months, Davidson and Kardashian broke up.

They said that the distance between them and their busy schedules made it too hard.

You may still be wondering, "Are Kim Kardashian and Pete Davidson dating?"

No, is the answer.

Kim Kardashian and Pete Davidson are no longer together.

They broke up after dating for about nine months.

Pete Davidson is known in different fields of the entertainment industry, such as an actor and a comedian.

Davidson's career is taking off after he made cameos in critically acclaimed films like The King of Staten Island.

So now we're wondering how much Pete Davidson is worth.

Celebrity Net Worth says that Pete Davidson is worth $8 million.

On the Parade website, which also has Davidson net worth, the following was written:

Pete Davidson's yearly income is currently in flux because he recently announced his departure from SNL after eight seasons. Typically, Davidson earns upwards of $500,000 per year, but without the regular gig, it may be different moving forward. However, he will continue to earn money through his comedy tours and other projects.

Who Has Pete Davidson Dated The Longest? 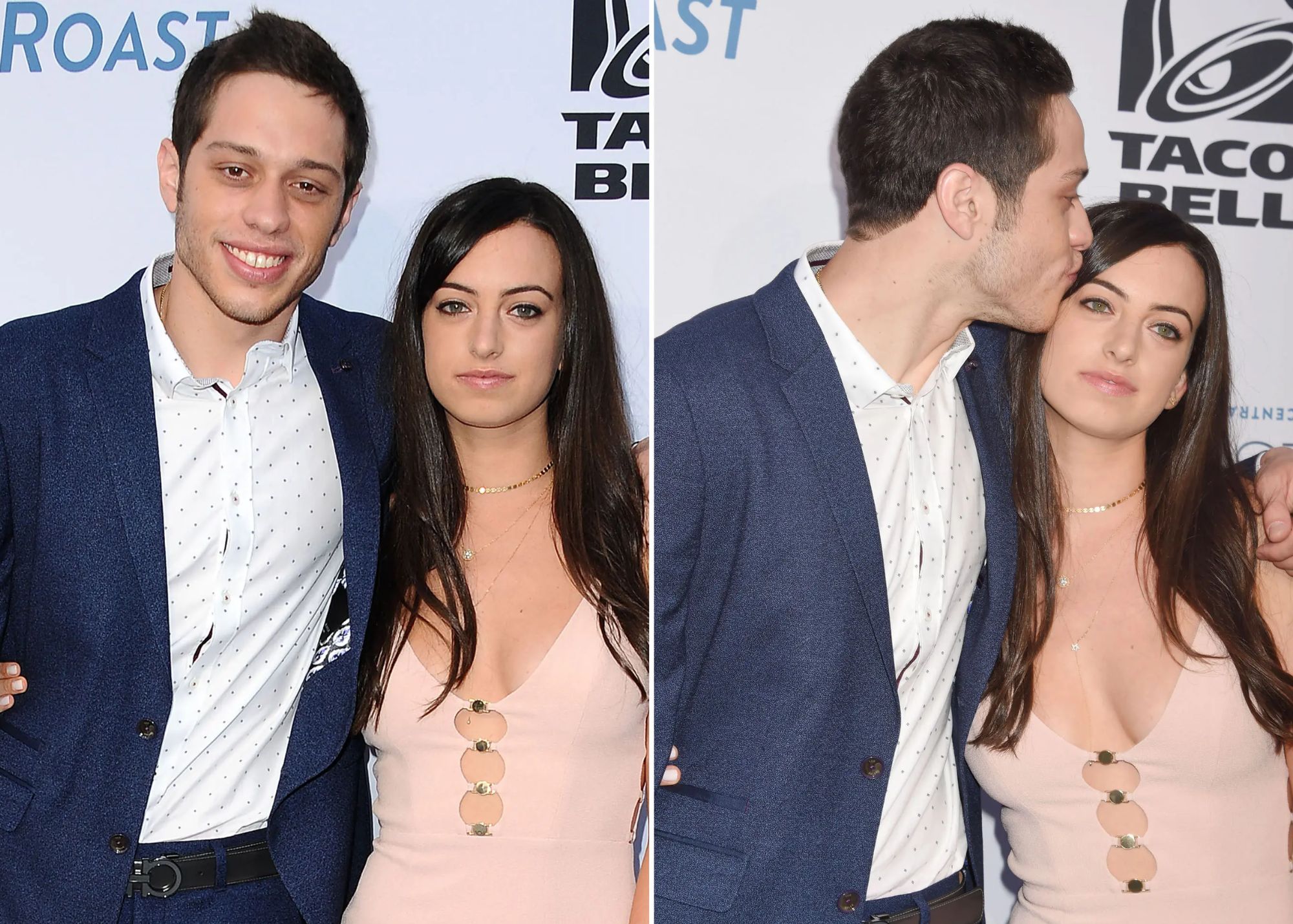 The two-year love affair that Davidson had with Cazzie David, daughter of Larry David, was the famous woman with whom he had the longest and most significant relationship. They dated between the years 2016 and 2018.

Who Is Pete Davidson's New GF?

After his recent breakup with Kim Kardashian, Pete Davidson is now single.

Pete Davidson is well-known in the entertainment industry thanks to his eight years as a cast member on Saturday Night Live and the stand-up circuit.

On the other hand, he may be even better known for having dated a number of Hollywood's most famous and beautiful stars.

Regarding his net worth, even though this is a lot of money for anyone, it's nothing compared to the fact that he's a billionaire.

Davidson has made money from his stand-up tours, his time at SNL, and his roles in movies and TV shows.

You can also search for Pete Davidson's other exes, including Carly Aquilino, Margaret Qualley, and Kaia Gerber.