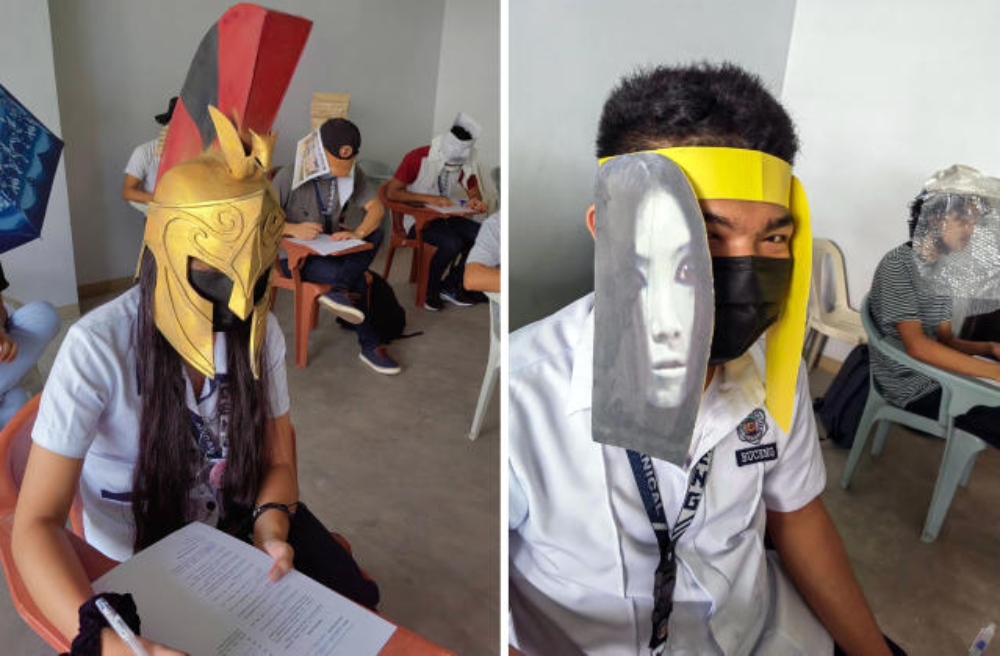 Photos of students in Philippines wearing ‘anti-cheating’ hats during exams go viral. When did this happen? This happened in October 2022.

One college in Legazpi City required its students to put on headwear to prevent them from looking at other students' papers.

As they took their exams, some wore homemade hats made from egg boxes, others made headwear out of cardboard and coat hangers, and some were wearing Halloween masks. These photos of students in Philippines wearing ‘anti-cheating’ hats during exams go viral.

Their objective? in order to avoid lying. In an interview with the BBC, their teacher said that she had been looking for a "fun way" to teach with "integrity and honesty."

Professor Mary Joy Mandane-Ortiz, a professor of engineering at the Bicol University College of Engineering in Legazpi City, the Philippines, came up with the concept while browsing Facebook.

It was put into place for the most recent midterm exams, which were taken at the college during the third week of October by hundreds of students.

So, she gave her students two days to make "anti-cheating hats" before exams on October 17 and 18 in engineering and computer science.

She remarked, "They accepted the challenge without any complaints," and she added that she was impressed by the creativity they displayed in creating them before taking their first exams in a classroom after taking online tests for more than two years due to the COVID-19 pandemic.

Marc Louise Pelaez, 21, a student who wore a handmade hat during the exam, admitted:

I was quite nervous at first. Seeing the hats made by my classmates was hilarious. The mood inside the classroom changed from intense to exciting.

He claimed that wearing the hats made the exams less demanding and more enjoyable. He expressed his appreciation by saying, "I really enjoyed the activity, and I’m looking forward to our final exam in December."

Mandane-Ortiz said that the plan was "very effective" because some of her students finished their tests early and no one had been caught cheating this year.

She claimed to be inspired after reading about the implementation of a related concept by a university in Bangkok, the capital of Thailand, in 2013.

A photo that appeared to show university students in Bangkok completing tests while using "ear flaps", sheets of paper taped to either side of their heads to block their vision, went viral in 2013.

Prof. Mandane-Ortiz and her budding engineers took the concept and ran with it, inventing complicated headgear, in some cases, in "only five minutes" with anything they could find lying around.

To fulfill the assignment, others wore caps, helmets, or Halloween masks.

Following the posting of pictures of their hats on social media by her students, some of these photos of students in Philippines wearing ‘anti-cheating’ hats during exams go viral and quickly racked up thousands of likes, the story was picked up by the local media, just as it had been in Thailand.