Post Malone Fell Off Stage Mid-Performance During An NYE Celebration

It just goes to show that you’re never too cool to stack it in public, even if you’re Post Malone.

He had a certified NYE nightmare when part way through his performance at Dick Clark’s annual New Year’s Eve celebration in Times Square, he decked it and fell off stage in front of a live audience and millions of people around the world.

All in a fetching neon pink studded jacket.

If that ain’t Rock N Roll I don’t know what is. 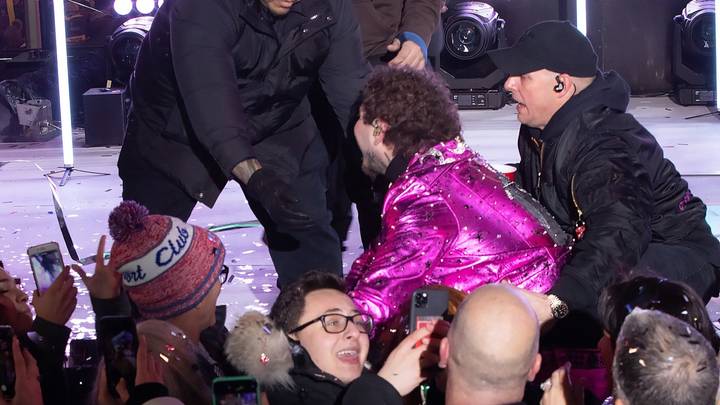 For whatever reason – alcohol may or may not have been involved – Postie loses his balance and falls off stage – much to the apparent delight of the crowd.

Missing out on the moment was obviously not an option,  though, as fans immediately begun taking selfies.

That’s the era we live in now.

Not to lose his cool and have a diva-strop, Post, 24, appeared to make light of the situation as he nonchantly beamed for the cameras.

Security and Post’s entourage were quick to help him up as he attempted to laugh off the embarrassment.

Post was headlining at the annual show, hosted by Ryan Seacrest and continued on with his set with no apparent injuries – perhaps, a small dent to his ego though.

With plans to have more ink covering his face in 2020 with his last edition for 2019 showcased on Instagram, Post’s tattooist, Kyle Hediger, has shared his most recent addition: 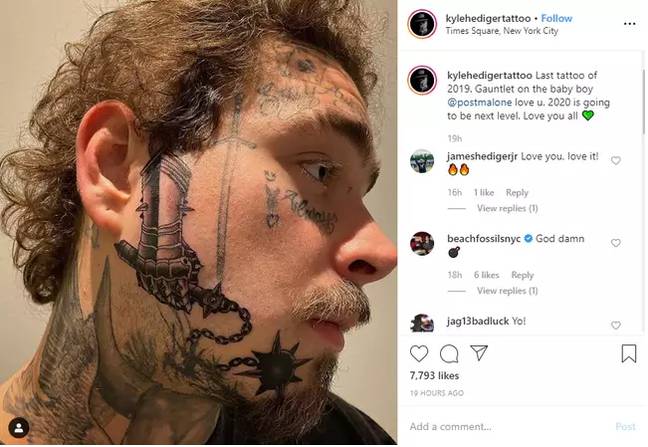 The last instalment of 2019 depicts an iron-clad fist clenching a spiked ball and chain – menacing don’t you think?!

It was accompanied by the caption: “Last tattoo of 2019. Gauntlet on the baby boy @postmalone love u. 2020 is going to be next level. Love you all.”

Post has since shared the new ink himself, wishing his 19.5 million fans a “good ass new year”.

Does make you wonder though.

What would he look like without all that ink.

Well, a Photoshop expert – YouTuber Mitchell Wiggs – has shown us just how different he looks without all his ink and all I can say he looks very… different.

The Photoshop expert decided to smooth out Malone’s hair, trading his iconic curly locks for a slick undercut while removing his tattoos one by one, evening out his skin tone and getting rid of any sign of them.

Is it me or does he look like Chris Pine? Those eyes are piercing my soul.

Despite his obvious love-affair with ink, Post Malone’s face tattoos haven’t always been there. The Texan rapper decided to get “Always Tired” tattooed under his eyes in July of last year while his “Stay Away” tattoo was done back in 2017, according to NME.

When asked by Tim Westwood why he’d chosen ‘Always Tired’,  he replied: “I tried to do something that’s relatively the same length of letters.

“I guess ‘always’ is more letters than ‘tired,’ but I was tired, so I didn’t realise.”

When asked why he decided to start inking his face, he said: “Anything to piss my mum off.”

Before adding: “It’s not right. I got a face for radio anyways, so why not?”

What a rock star.

Netflix’s ‘The Stranger’ Creator Has Another Thrilling Series Out There