Queen Elizabeth's Favorite Food According To The Queen's Personal Chef 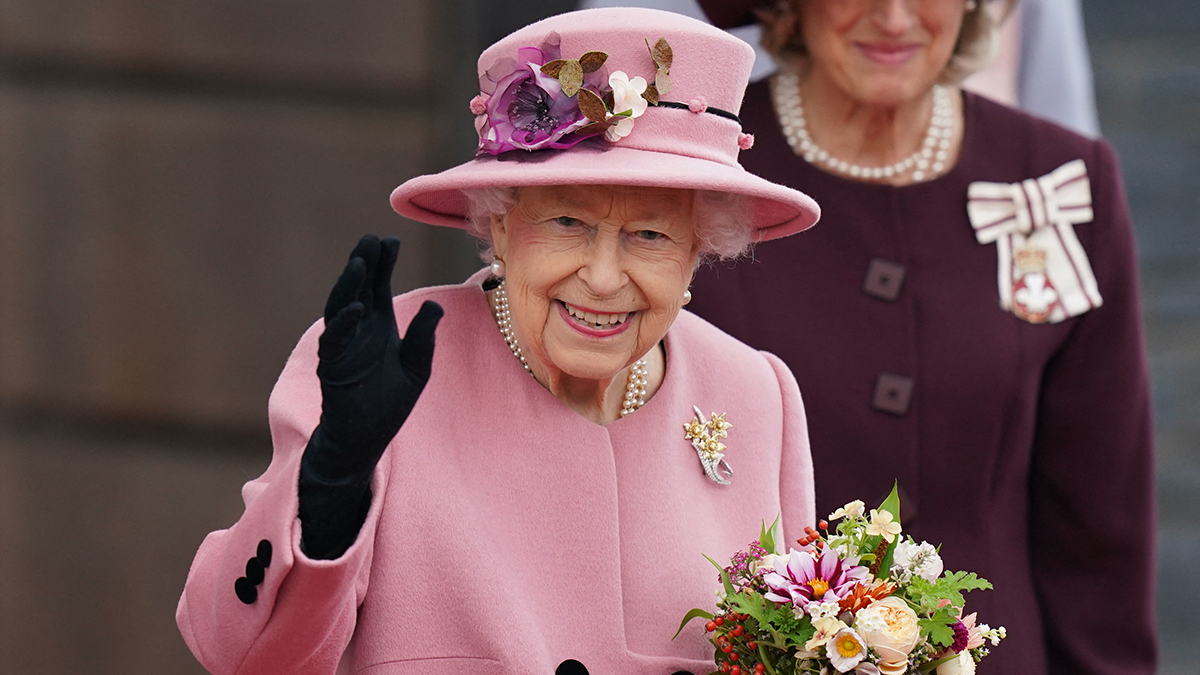 If someone is born with a silver spoon in their mouth, you probably expect that what they eat is a bit classy and a high-priced dish.

On the other hand, the 96-year-old queen is quite happy with simple meals.

McGrady talked about the Queen's favorite afternoon snacks, food preferences, and favorite meal of the day in an interview.

Surprisingly, it turns out that the queen has a serious craving for sweet things.

The queen had afternoon tea every day, wherever she was in the world. If we were at Buckingham Palace and she was on her own for tea, or whether she had Prince William come and join her, or whether she had a garden party for 6,000 people, or even if she was on the Royal Britannia in Australia. The Queen loved afternoon tea. Certainly, when I was there, she would sit down religiously for tea.

McGrady also mentioned that Queen Elizabeth II enjoys having afternoon tea and that there is always a bite-sized cake served beside it.

Anything from a mini chocolate eclair to a Queen’s cake, and large cakes too, which we would call a cut of cake, where the Queen could cut a slice of cake.

He also enumerated some of the cakes that they prepare for the Queen's sweet pastries, such as honey and cream sponge, a fruit cake, gingerbread, banana bread, and chocolate biscuit cake.

Some of the other desserts he mentioned were chocolate biscuit cake and banana bread.

One of her favorites is a chocolate ganache cake. They were served with Earl Grey tea, and that was afternoon tea for the Queen every day.

One thing you can say about the Queen is that she doesn't waste money for a certain expensive dishes.

When the chef who had worked at the palace for 15 years moved from The Savoy to Buckingham Palace, this was one of the things that really surprised him.

He thought they would have smoked salmon, foie gras, and caviar every day, but they didn't.

He didn't think that a Queen would be very, very frugal and like simple, plain foods.

The one thing you can say about the Queen is that she is very frugal. It was one of the things that really surprised me when I moved from The Savoy to Buckingham Palace, I thought every day would be smoked salmon, foie gras, caviar, but no. The Queen is very, very frugal, and it’s simple and plain foods. That comes from her early years of growing up during the war. 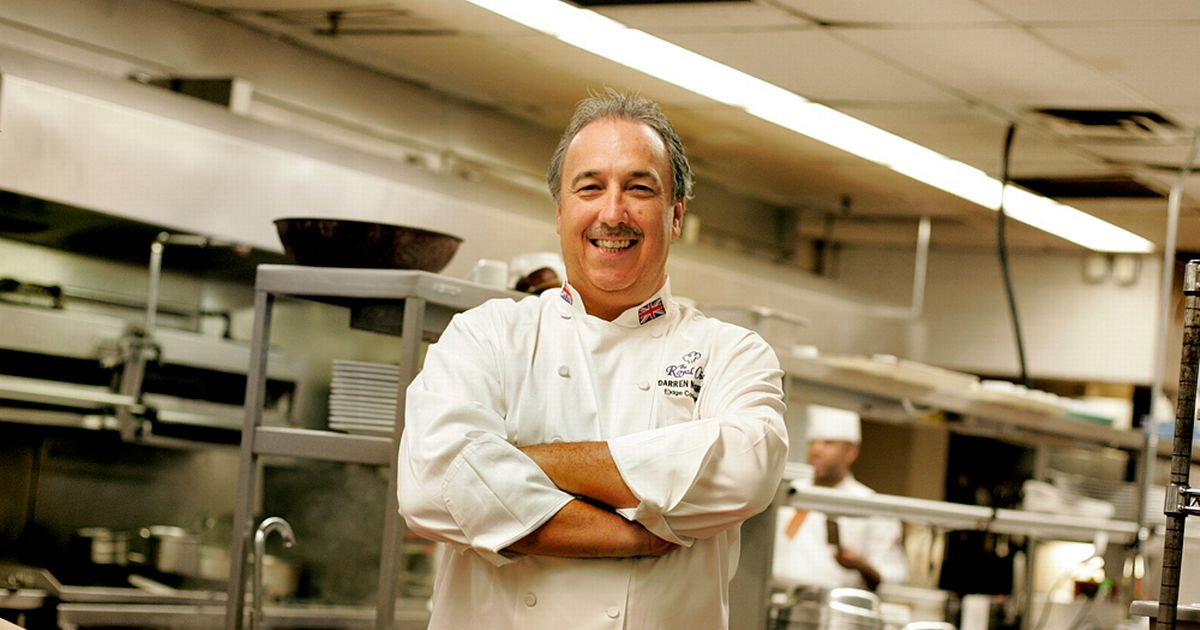 Chef Darren McGrady smiles inside the kitchen while crossing his arms

He currently resides in Dallas, Texas, where he maintains a career as a chef, author, culinary consultant, event planner, and public speaker.

His first cookbook, which he dubbed "‘Eating Royally; Recipes and Remembrances from a Palace Kitchen," is currently in its sixth printing.

The Chef also donated the whole advance as well as all of the royalties he has received from the book to the Elizabeth Glaser Pediatric AIDS Foundation.

He has been on The Oprah Winfrey Show, Larry King Live on CNN several times, the Fox News Channel, BBC, CBC, MSNBC, and Sky TV. 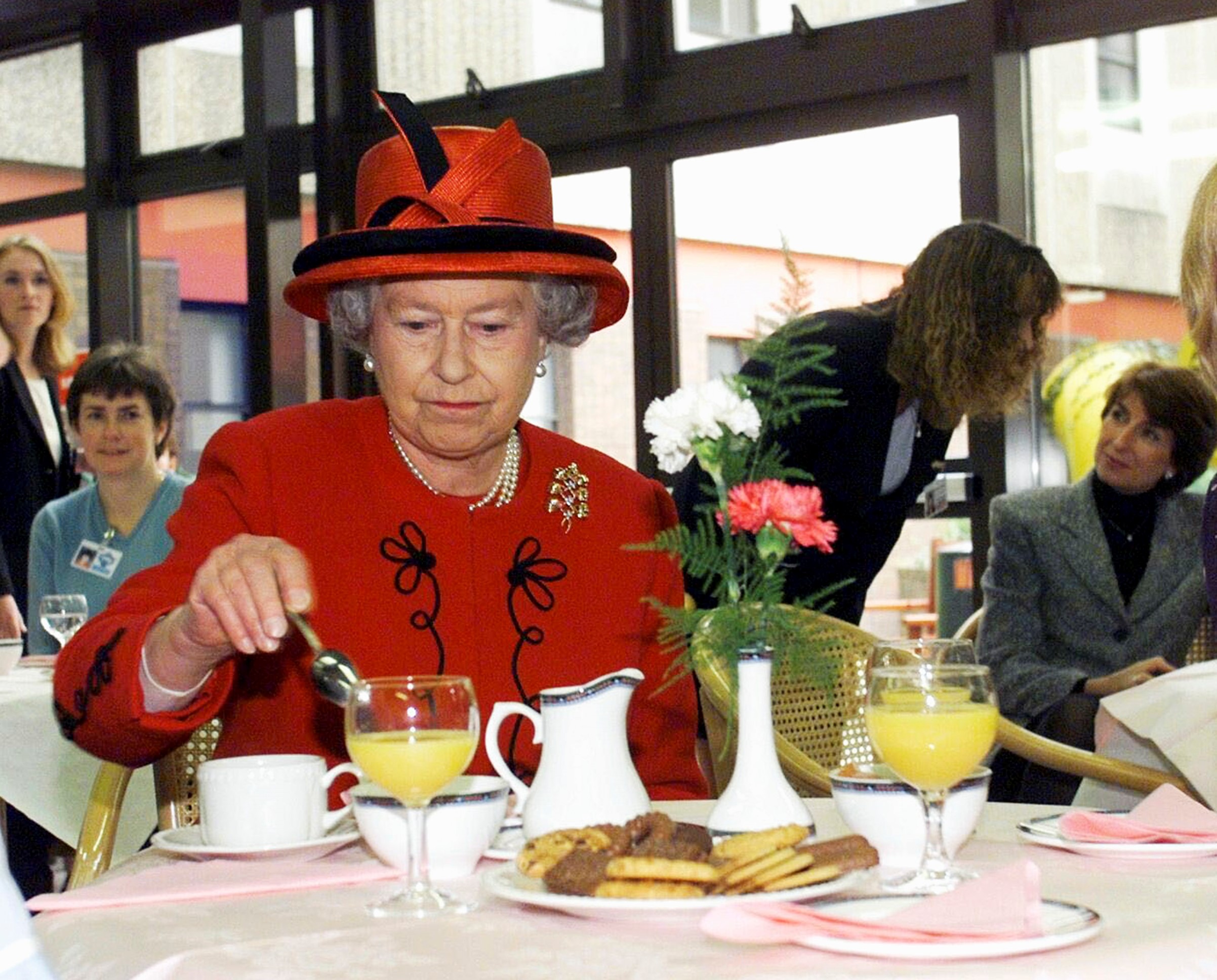 First Things That Should Serve Is A Cup Of Tea

Most people know that Queen Elizabeth doesn't like Earl Gray tea either way.

Twinnings, a well-known English company that sells tea all over the world, seems to be her favorite brand.

Her morning seems to start with a bowl of Special K and different kinds of fruit.

She is said to occasionally treat herself to some scrambled eggs and smoked salmon on special occasions, but only when she is in the mood.

Before she digs into her lunch, the Queen enjoys a gin and Dubonnet cocktail, which is worth remembering because it is one of her favorite pre-meal drinks.

After this, it is said that Queen Elizabeth likes to eat grilled fish or chicken for lunch and stays away from starches.

When it comes to food, it's clear that Queen Elizabeth likes simple things best.

The Queen's favorite fish dish is Dover sole with wilted spinach or courgettes.

As for the chicken, it was grilled and served with a salad.

Before dinner, Queen Elizabeth might have some chocolate biscuit cake with her afternoon tea.

At this point, everyone knows that Queen Elizabeth loves chocolate cake.

The same rules apply to dinner as to lunch.

Meat and vegetables that are cooked simply take the lead, but there is room for pheasant or deer if the Queen wants.

Queen Elizabeth loves a Sunday roast just as much as the rest of us.

She also likes strawberries or peaches for dessert, along with chocolate.

What Does Queen Elizabeth Eat For Breakfast, Lunch And Dinner

Here's What Queen Elizabeth Typically Eats In A Day

For almost a century, people have been interested in Queen Elizabeth II, both for her work as Queen of the United Kingdom and for her private life as a respected royal.

One thing that always gets people talking is what queens, kings, and other heads of state like her eat.

What kinds of fancy foods are served at banquets for the world's elite? And what do they like to eat when no one is watching at home?

Chefs and royal staffers have come forward over the years to reveal facts about Queen Elizabeth's dining habits, and the things she prefers on her plate may surprise you.

In the video above, you can see what a typical day for Queen Elizabeth looks like.

This number, which includes the Sovereign Grant and her personal income, is up £15 million from her 2020 earnings, according to the Sunday Times Rich List.

What Was Queen Elizabeth's Favorite Food?

This may be a honey and cream sponge cake, a fruit cake, gingerbread, banana bread, a chocolate biscuit cake, which is one of her favorites, or a chocolate ganache cake.

They were served with Earl Grey tea, and the Queen had that same tea every afternoon for her afternoon tea.

What Is The Queen's Favourite Flavour?

The Queen loves chocolate very much.

She would order anything with chocolate on it, especially chocolate perfection pie, which has layers of white chocolate, dark chocolate, and chocolate shavings.

What Queen Eats For Breakfast?

After taking a bath and getting dressed, the queen eats her official breakfast, which is cold cereal. Special K is said to be her favorite.

Most people can eat Original Special K cereal for breakfast because it is low in simple sugars and fat.

One bowl has a small number of calories compared to what you need every day.

Toast and marmalade are also sometimes on the table.

What Is The Queen's Favorite Cheese?

Cathedral City cheese is made by the only company that has the coveted Royal Warrant. This means that it is supplied to Her Majesty The Queen's Household.

What Time Does The Queen Eat Dinner?

The Queen goes back to her office for an hour after tea to finish up the day's work.

If Her Majesty doesn't have something to do in the evening, she usually goes to her room at 6 p.m. and gets ready for dinner at 8 p.m.

People have told her to stay away from foods like pasta, rice, and potatoes that have a lot of starch. And Kate Middleton has gone in the same direction.

Former royal chef Darren McGrady said, "The Queen doesn't like pasta and bread very much. Instead, she prefers meals with fish or meat and vegetables."

Food from throughout the world is at your fingertips when you're Queen.

You can ask for a pricey and unique culinary type if you choose.

However, food that tastes good and costs little?

It looks like the average person is a lot like Her Majesty in a lot of ways.