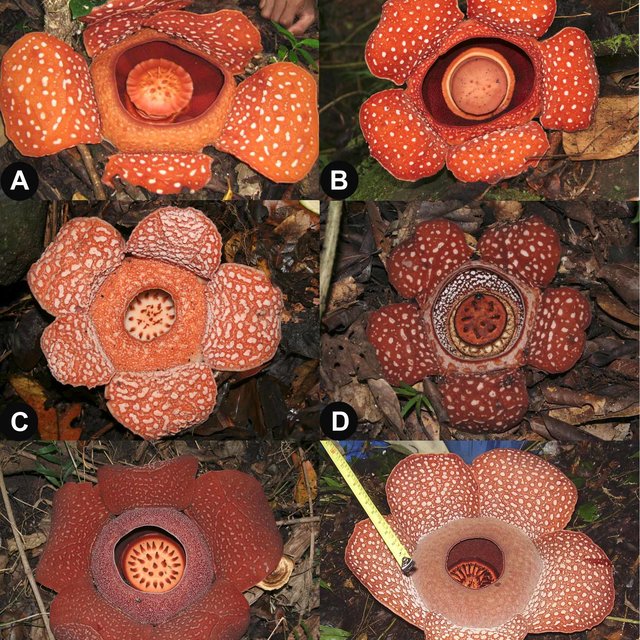 This incredible plant, known as the Rafflesia Banaoana, can be found deep within the Luzon rainforest in the Philippines. It is a large alien-looking plant that grows to be more than half a meter across and has meaty red petals with white spots on them. It's one of the world's most endangered plants, and any botanist's ambition is to get a close look at it. 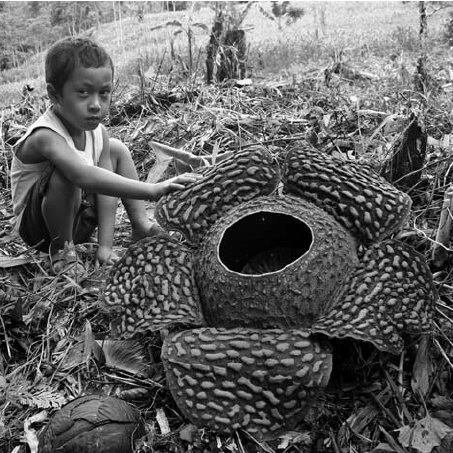 Chris was brought to tears by the event. Chris Thorogood, 38, is the deputy director of the Oxford Botanic Garden and Arboretum. He was fortunate enough to travel to the rainforest and witness the brilliant plant firsthand, an experience that brought him to tears.

Thorogood is the first westerner to have been near the exceptional Rafflesia Banaoana, which is endemic to the region. It's not difficult to understand why. It took him roughly two weeks of arduous trekking through the hot and humid jungle, where he had to use his machete to chop his way through unending walls of vines and cross a number of rivers in order to complete his journey.

He was greeted by a swarm of huge ants and other insects along the route. In the process, he brushed through toxic plants, the sting of which seemed like someone had thrown boiling water on his face. Leeches had sucked the blood from his arms by the time he finally discovered a Rafflesia.

Pain and tiredness, however, gave way to joy as he got closer to the plant, which had been a childhood dream come true ever since he first saw a photograph of the Rafflesia in a botanical book during his early youth.

“It’s hard to put into words the feeling,” he told The Guardian. “It’s a combination of the exertion of the trek, which is quite intense, but also a feeling of sharing a moment with something ephemeral, rare, and a striking work of nature that you can’t see anywhere else. It’s a bit of a tear-jerker to sit with something like that.”

Rafflesia is a genus of parasitic flowering plants with gigantic flowers and buds that grow directly from the ground or from the lower stems of their host plants, which are typically lianas. Rafflesia flowers are known for their immense size and the fact that they are parasitic. Scientists have identified 28 species of Rafflesia, one of which has the largest blossoms on the planet, which is why they are frequently referred to as "monster flowers." 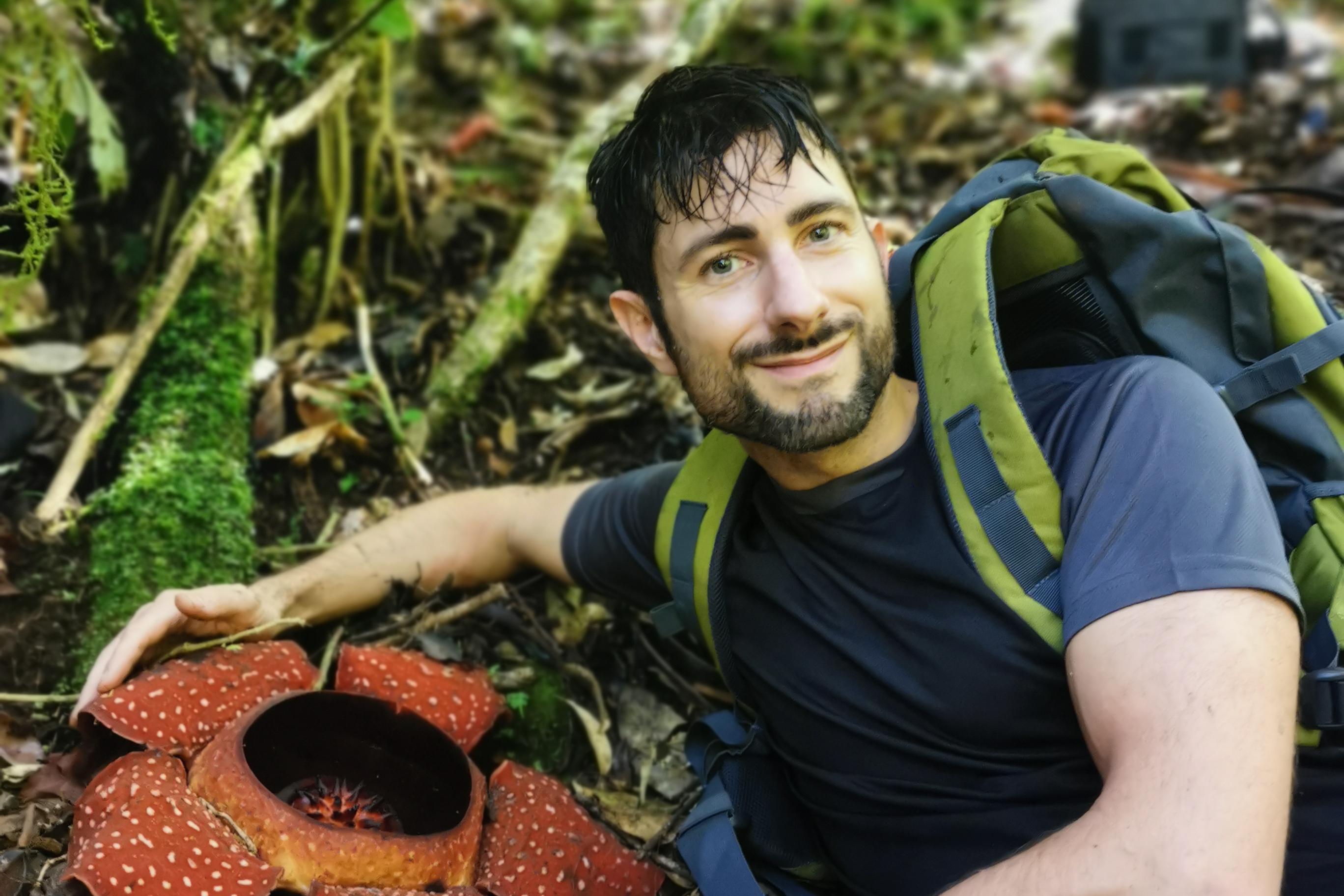 Chris Botanist siiting next to a Rafflesia flower in the forest

The Rafflesia Banaoana is the rarest and most secretive species in the genus Rafflesia, which was named after Sir Stamford Raffles, the founder of modern Singapore. It is also the most endangered species in the world.

In spite of the fact that Chris is the first westerner to see a Rafflesia flower, the botanist is quick to point out that his encounter with the flower would not have been possible without the work of Pastor Malabrigo Jr and Adriane Tobias, both of whom work at the University of the Philippines and are the only other botanists to have seen the flower.

It was the indigenous Banao community, who owns the land and accompanied them to the flower, that granted them permission to penetrate the darkest depths of the rainforest. The trail to the flower was hacked through dense and unfriendly foliage by the trio. Before reaching the Rafflesia, Thorogood's arms were covered with leech blood, and he was nursing a plant sting that "felt like someone poured boiling water" on his flesh, according to Thorogood's description.

Despite the fact that the two-week journey was the culmination of years of planning, the expedition's origins can be traced back to Thorogood's boyhood bedroom in Chelmsford, Essex. Since he was eight years old, he has been fascinated by images of alien kinds of rare flowers found in the most inaccessible parts of the world.

“There were these extraordinary photographs of these flowers in the jungle somewhere that seems so remote and inaccessible and alien to me, as a child, having never really travelled very far,” he added.

“It’s almost like they were a magnet from the other side of the globe luring me to go and see them. I remember quite clearly as a child being entranced by these photographs in books of these otherworldly botanical enigmas. I think I subconsciously made my plans then that I was going to make it my life’s work to go and see them.”

When fully grown, Rafflesias can reach 1.5 meters in diameter and weigh up to 10kg, making them the world's largest flower by weight. There are 13 different types of Rafflesia species in the Philippines, and they are still considered a bit of a mystery to scientists throughout the world.

Thorogood, the author of the book Weird Plants, believes that it is critical to understand uncommon species in order to better protect them.

“Two in three of the world’s plant species are threatened with extinction, which is alarming, and we’re losing plant species possibly more quickly than we can describe and discover them,” he said. “We can’t conserve or protect something if we don’t know it exists.”

As for his next expedition, Thorogood is remaining tight-lipped: “With 400,000 or so different plants, there’s a bewildering diversity of plants out there. So it’s very difficult to narrow it down to one or two. But there will be plenty of plants lying in wait for me, I’m sure.”

"I wouldn't touch it based on the look alone 🙂"

How Do Rafflesia Eat?

And, in contrast to most plants, this bloom does not rely on the Sun's energy to produce its own nutrition. Instead, it is a parasite, meaning that it obtains all of its nutrients and water from a host plant, which is a vine belonging to the grape family.

The Rafflesia Banaoana flowers can only be found in the deep rainforests of Luzon island, in the Philippines, and they are extremely rare. "It's the world's most whopping strange plant," according to Thorogood, the deputy director of the Oxford Botanic Garden and Arboretum.