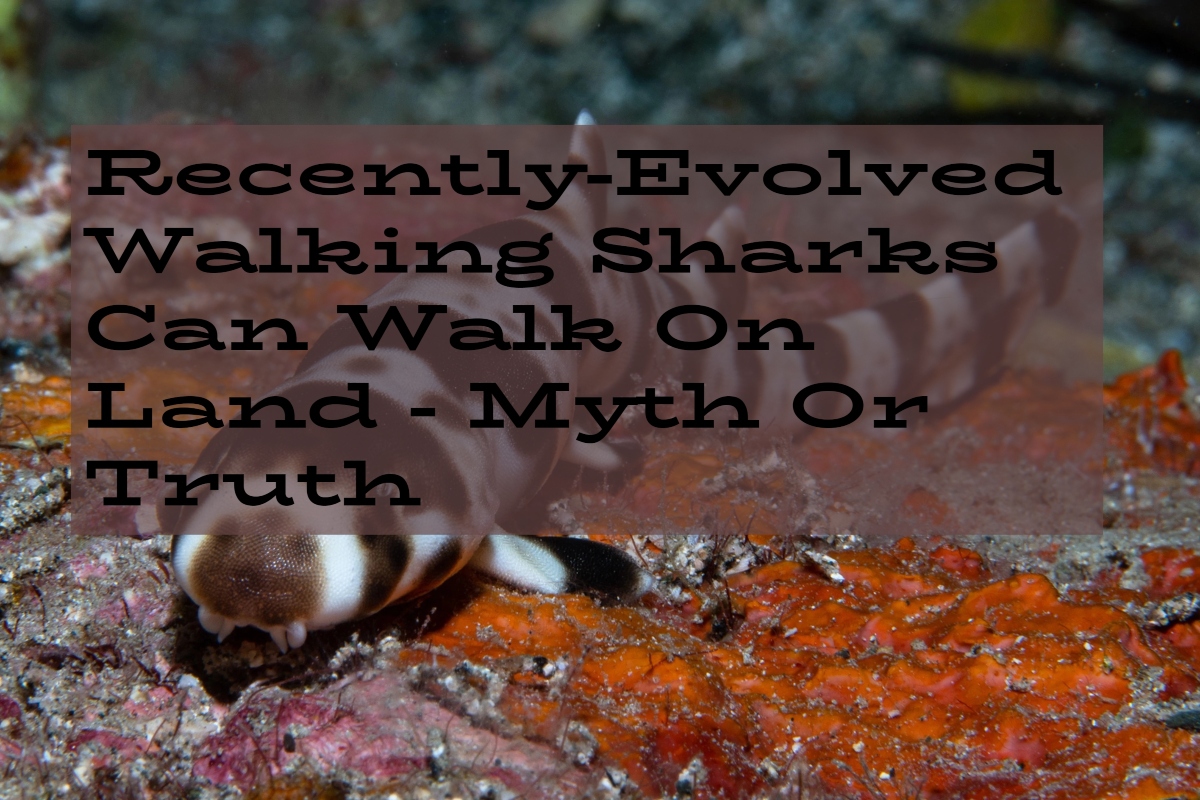 Anything else is just too frightening. Of course, a shark strolling down the street is not a good thing.

So... Are walking sharks actually a thing?

In other words, a shark does indeed "walk." But it's uncommon, tiny, and it's not after you. Apology for spoiling the surprise so soon in the explanation. 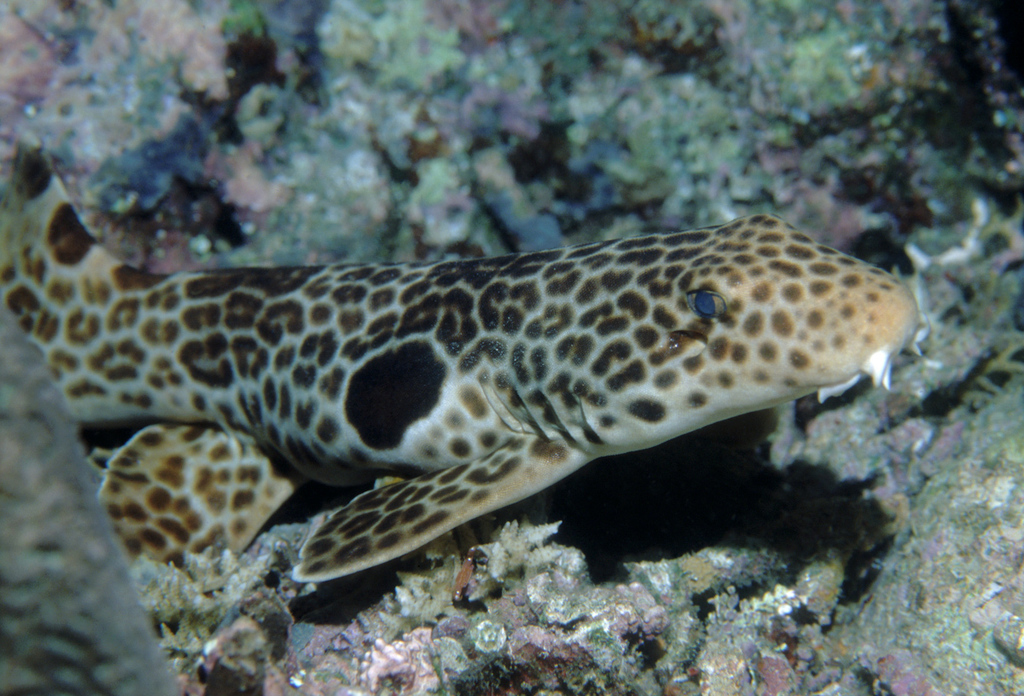 Brown-spotted walking shark in the ocean

Are Sharks Evolving To Walk On Land?

For hundreds of millions of years, sharks have inhabited the oceans of this planet. Many animals have hardly changed throughout that time.

However, some odd sharks are still growing and have even developed the ability to walk. These recently evolved walking sharks are here.

Four recently found shark species can walk on land by using their four fins as short legs. According to CNET, these shark species are the most recently developed ones that science is aware of.

You might have seen the shark on social media after some guy claimed to have discovered a new species of shark after spotting one while traveling somewhere in Indonesia, but he hadn't watched enough Shark Week lol.

The moment marine biologists saw the video, they all naturally exclaimed, "Yeah, duh, that's so 2006."

They first learned about these sharks in 2006 when they were found in West Papua, Indonesia's Bird's Head Seascape.

Mark Erdmann of Conservation International and his group are currently investigating the evolutionary history of walking sharks.

Keep in mind that if humans evolved from wet slime and eventually learned to walk on land, it is even more fascinating to watch a shark evolve to do the same.

It turns out that there are roughly nine species of walking sharks that can swim and walk using their fins.

These three-foot-long animals move their pelvic fins in the rear and pectoral fins in the front as they move around the seafloor or even on top of coral reefs that are not submerged during low tide.

The sharks' agility enables them to move between tidal pools and other reef regions in search of crabs, shrimp, tiny fish, and other prey.

A researcher at the University of Queensland in Brisbane, Australia, Christine Dudgeon, claims that "during low tides, they become the top predator on the reef."

A lengthy investigation by an international team of collaborators has discovered four additional species of walking sharks since 2008, increasing the total to nine. 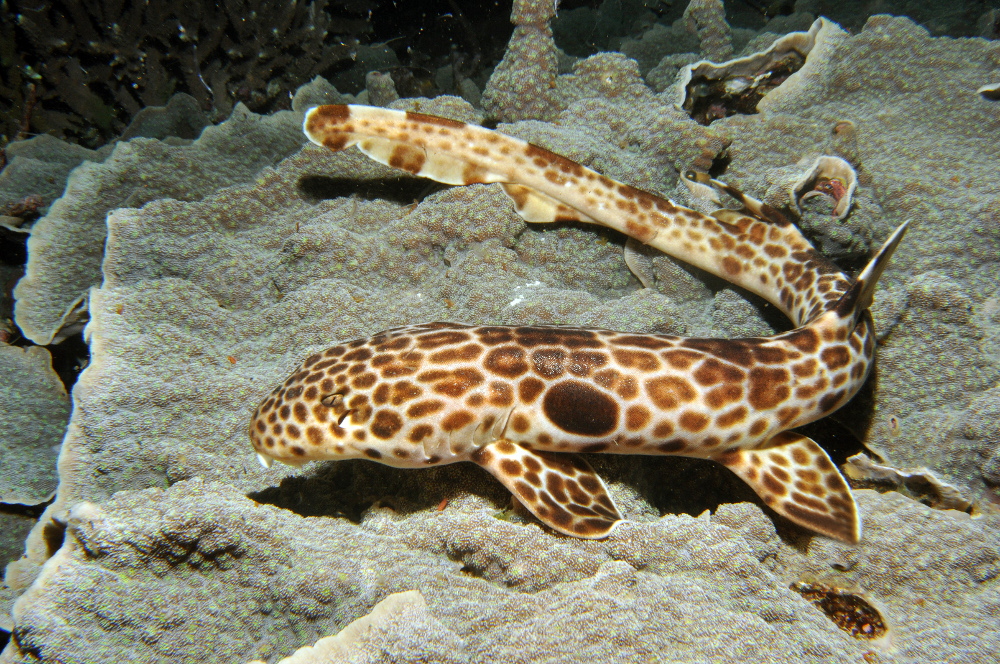 Brown-spotted Hemiscyllium Michaeli in the ocean

Another cool thing about sharks is that shark geneticists have used genetic samples from shark fins to look at the genomes of these sharks and compare them to older species to figure out when each one split off into a new species.

In case you didn't know, sharks are about 200 million years older than dinosaurs. But these genetic studies show that walking sharks have only been around for about 9 million years.

According to Gavin Naylor, director of the Florida Program for Shark Research at the University of Florida, most sharks evolve gradually, which is very unusual.

For instance, sixgill sharks, which live in the deep sea, "seem locked back in time," according to Naylor.

"We see animals from 180 million years ago with exactly the same teeth."

But walking sharks are probably still changing in their native tropical waters in Australia, Papua New Guinea, and eastern Indonesia.

According to Naylor, this may be the only area in the world where shark speciation is still occurring.

Researchers will have a better understanding of the animals and the reasons behind why "some change, and others stay the same," by studying these creatures, he adds.

In the past, the ancestors of sharks and all other jawed vertebrates split about 400 million years ago. Since then, only roughly 1,200 new species of sharks and rays have been discovered.

According to Naylor, the majority of creatures have very sluggish rates of evolution, reproduction, and longevity. 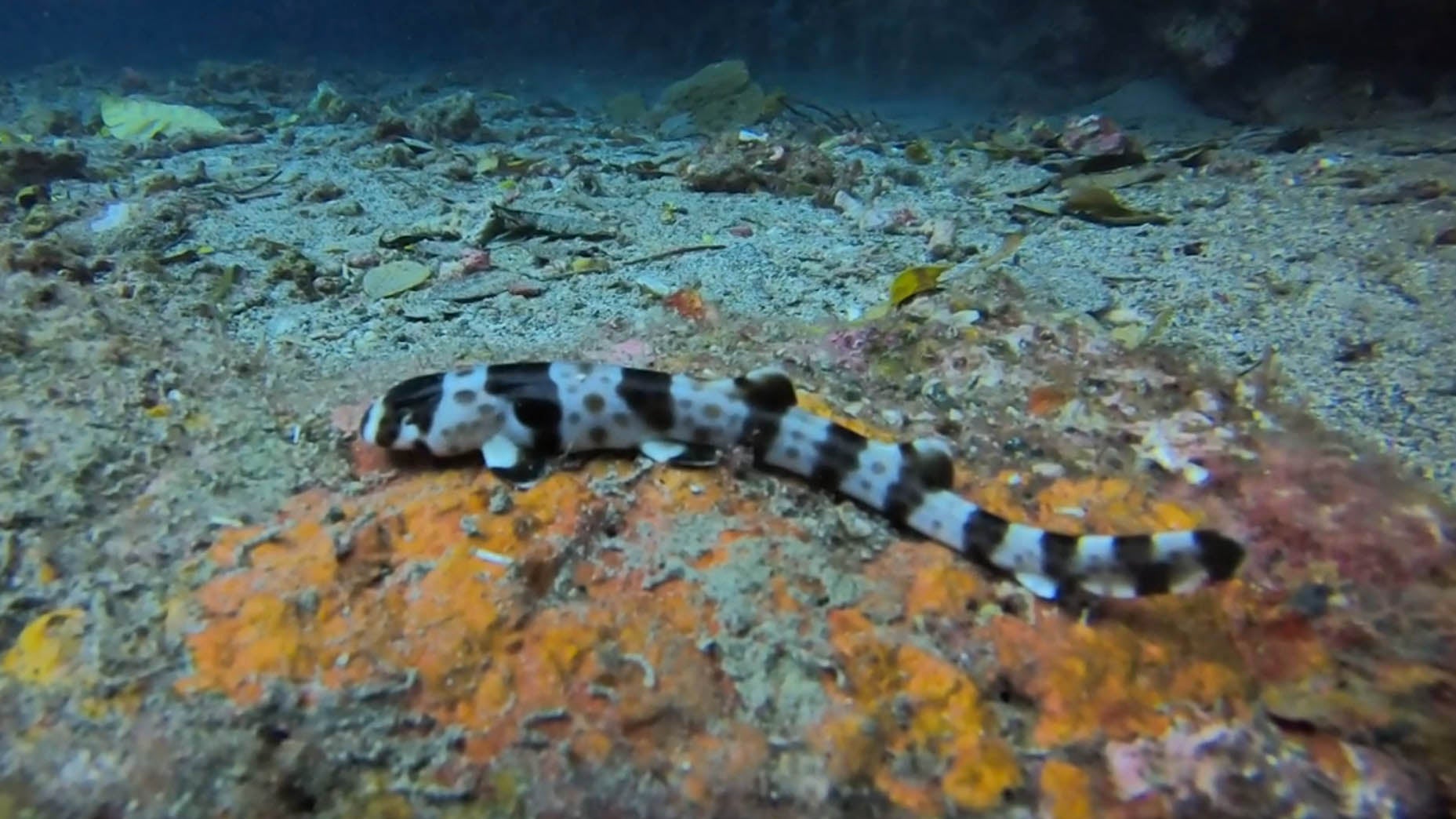 Black and white striped Hemiscyllium Michaeli in the ocean

In other circumstances, this combination of characteristics would reduce an animal's adaptability and increase its risk of extinction because, in many cases, ongoing evolution is required to survive shifting environmental conditions.

For instance, you can assert, in Naylor's words, "these things should be extinct." "How do you exist for so long with a slow rate of evolution?"

Sharks, however, have grown and have survived longer than many other aquatic animals that have come and gone throughout their time in the water, proving that they are not extinct.

They seem to have found a recipe that works even though the ocean is always changing.

Walking sharks, also known as epaulette sharks, were thought to only exist in five species by scientists up until 2008.

Even though most of these species have similar body shapes, they look different because of how they are colored and patterned.

Dudgeon collaborated with Mark Erdmann of Conservation International and Gerry Allen of the Western Australian Museum to collect DNA samples from sharks in the area.

They did this without harming the sharks. Additionally, samples from museum specimens were used.

In Naylor's lab, they were then sequenced, studied, and compared to make a phylogenetic tree, or genetic map, of the walking shark genus Hemiscyllium.

They, like most sharks, are vulnerable to issues such as overfishing and harvesting for the aquarium trade.

Dudgeon says that some of the species are fragile because they are only found in small places.

There isn't much information because only three of the nine known species are on the International Union for Conservation of Nature's Red List of Threatened Species, and some of them have only just been fully described and haven't been studied much.

Fortunately, none of them are regarded as endangered or threatened at this time, but in other situations, "we really just don’t know how they’re doing," according to Dudgeon.

Sharks have been swimming in the oceans of the world for a very long time. Many species haven't changed much in that time. But some weird sharks are still changing, and some of them have even learned to walk.

What Is The Most Recently Evolved Shark?

Jakarta, Indonesia (January 20, 2020): A new study from Conservation International, the University of Queensland, the Indonesian Institute of Sciences, the Australian CSIRO, and the University of Florida confirmed that walking sharks are the most recently evolved species. The study was published in the journal Marine and Freshwater Research.

Is There A New Species Of Shark That Can Walk On Land?

Epaulette Sharks - A fish with the ability to traverse land! For the shark to swim out to deeper waters, the water is either too shallow or not present at all. Their ability to use their pectoral and pelvic fins as legs and feet makes them unusual.

According to an analysis of the walking shark genus by Conservation International and others, most of the nine recently evolved walking sharks species live in a ring around northern Australia, the island of New Guinea, and the satellite islands of Raja Ampat, Aru, and Halmahera in eastern Indonesia.