Road Rager Threatens To Break Man’s Kneecaps, Gets Knocked Out Within Seconds 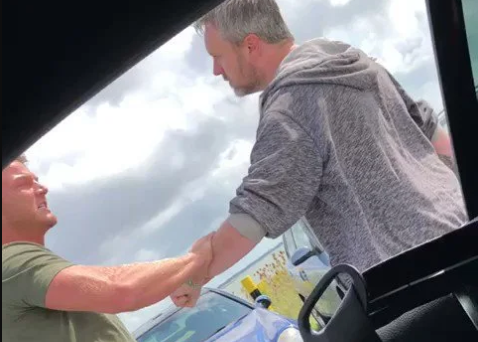 An enraged driver threatened to break a man's kneecaps, but was knocked out by two quick punches to the head. It's interesting how fights in movies appear to drag on for a long time. Just two people trading blows, having enough time to change venues and slate each other and for the most part, they only end when an earthquake splits the ground between them.

In real life though, they’re horribly choreographed, it’s a mess of limbs, sweat and swearing and ten seconds is more or less the extent of it before someone decides they’re “above” fighting, or there’s several punches that sound nothing like as bassy as a Bond film would have you believe, resulting in an unglamorous knockout.

That this dangerously short fight, for example. If this happened in a film, the angry man – played by a de-aged Mickey Rourke – would have brawled for seven minutes with the other guy – The Rock – before picking him up and smashing him down against his knee (Bane on Batman style). He’d have then made a knee quip.

Did The Punch Knock Him Out?

In reality, a man with some sort of baton he probably bought on that weird Wish app threatened to break a kneecap or two of another man, before being promptly sparked out…

Did He Break His Kneecaps?

Where Did The Road Rage Incident Take Place?

There’s no real context for this video but by the looks of things, it was in a carpark and involved some sort of car issue.

The video was posted to Twitter by user Charlier Miller who captioned it “Anybody want to lose there [sic] f*cking kneecap” and has since been viewed 3.4 million times, as well as being liked by 104,000 people and retweeted by a further 30,000. This is the best we have for an explanation… I mean you can’t say fairer than that. Neither do I.

Did He Break His Kneecaps?

Let’s hope everyone’s alright, eh? We all make mistakes and threatening to kneecap someone can probably be considered one of them.

That said, while I’m going to assume this isn’t a recurring theme in this man’s life, he does own a baton. He shouldn’t.