Robert Wadlow The Tallest Man Ever Recorded In History 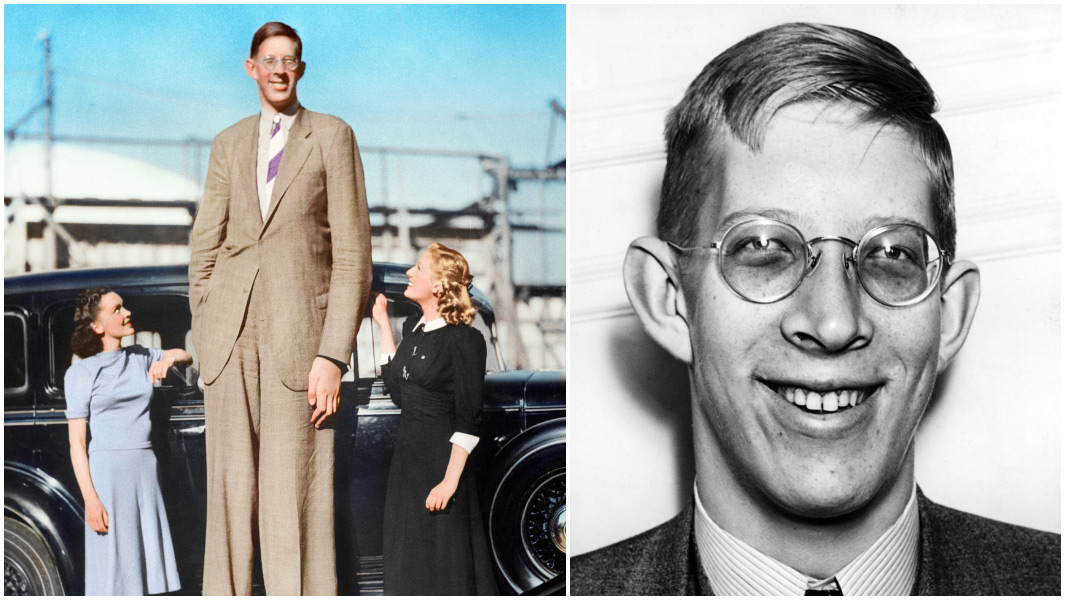 Wadlow wore a size 25 ring, and his shoes were a men's size 37 AA, which meant they had to be specially constructed for him.

Robert Wadlow was the first of five children to be born to Harold and Addie Wadlow, and being the oldest of the five, he was the one who put the "big" in "big brother."

Wadlow was born at a size that was considered normal; nevertheless, even at a young age of a few months, it was obvious that he was not typical in any way.

It was later discovered in 1929 that he had hypertrophy (an enlargement) of his pituitary gland, which is the gland that is responsible for directing the human growth hormone.

Robert's rapid physical development was the result of an enlarged gland that secreted an excessive amount of human growth hormone (HGH).

At the time of his passing, there was no evidence to suggest that Robert had ever stopped growing.

At the age of eight, he towered over his four younger siblings and surpassed his father, who stood 5 feet 11 inches (180.3 cm) tall.

His father's name was Harold F. Wadlow. Robert was able to help carry his father up the stairs of their family home when he was still at the age where most children required their parents to physically carry them.

However, Robert's extraordinary height resulted in a number of health problems, all of which became increasingly severe as he continued to get older and taller.

However, when he was a little boy, he did everything in his power to participate in the same things that his contemporaries were doing.

For instance, when he was 13 years old, he joined the Boy Scouts and received a specialized uniform along with a tent and a sleeping bag.

At the age of 17, Robert had already reached a height of 2.45 meters (8 feet 0.5 inches), making him, predictably, the tallest teenager in history.

The affable giant received his high school diploma in 1936 and immediately joined an academic institution with the goal of majoring in legal studies.

During the year 1936, he began a tour with the incredibly well-known Ringling Brother Circus, which is what led to the giant gaining famous all over the world.

In response to the question in the radio interview whether or not he found it annoying when people stared at him, he calmly responded, "No, I just overlook them."

The shy and humble man was unfazed by his sudden rise to fame and made the most of his newfound notoriety by making a living off of making public appearances.

Additionally, he went on a commercial trip with the International Show Company, which is now known as INTERCO, and they offered to create his shoes without charging him.

This was a blessing for Robert, who had the largest feet ever recorded at an astounding 47 centimeters long (18.5 inches).

The length of the Alton Giant's hands, measured from the base of his wrist to the tip of his middle finger, was the biggest ever recorded at 32.3 centimeters (12.7 inches).

Robert Wadlow died at the age of 22.

Robert Wadlow Cause Of Death

Robert's legs were the unfortunate cause of his untimely death.

It was around 1:30 in the morning on July 15, 1940, in a hotel in Manistee, Michigan, that he passed away as a result of a septic blister that had formed on his right ankle as a result of a brace that had been badly fitted only a week earlier.

His final words were, "The doctor says I won't get home for the...celebrations" which was a reference to his maternal grandparents' golden wedding anniversary.

He passed away shortly after those words were spoken.

A Reddit user Aeon1508 said, "He died because his leg braces caused a sore that got infected and he got blood poisoning."

A Reddit user shared his opinion about his death cause, "That’s likely because his heart was not physically capable of pumping that much blood though that much circulatory system. I doubt he would have been able to handle much physical exertion, a couple minutes on the treadmill probably would’ve blown out his overworked heart, which tends to happen to many effected by gigantism."

How Tall Was The Tallest Man Ever Lived?

The tallest man war Robert Wadlow with a height of 2.72m.

How Tall Can Humans Get?

Who Has The Largest Foot In The World?

Robert Wadlow has the largest feet ever recorded till now. His feet were 18.7 inches long.

Have you heard about Robert Wadlow the tallest man ever recorded in human history till now before?