Sanpaku Eyes - What Does This Mean According To Japanese Superstition 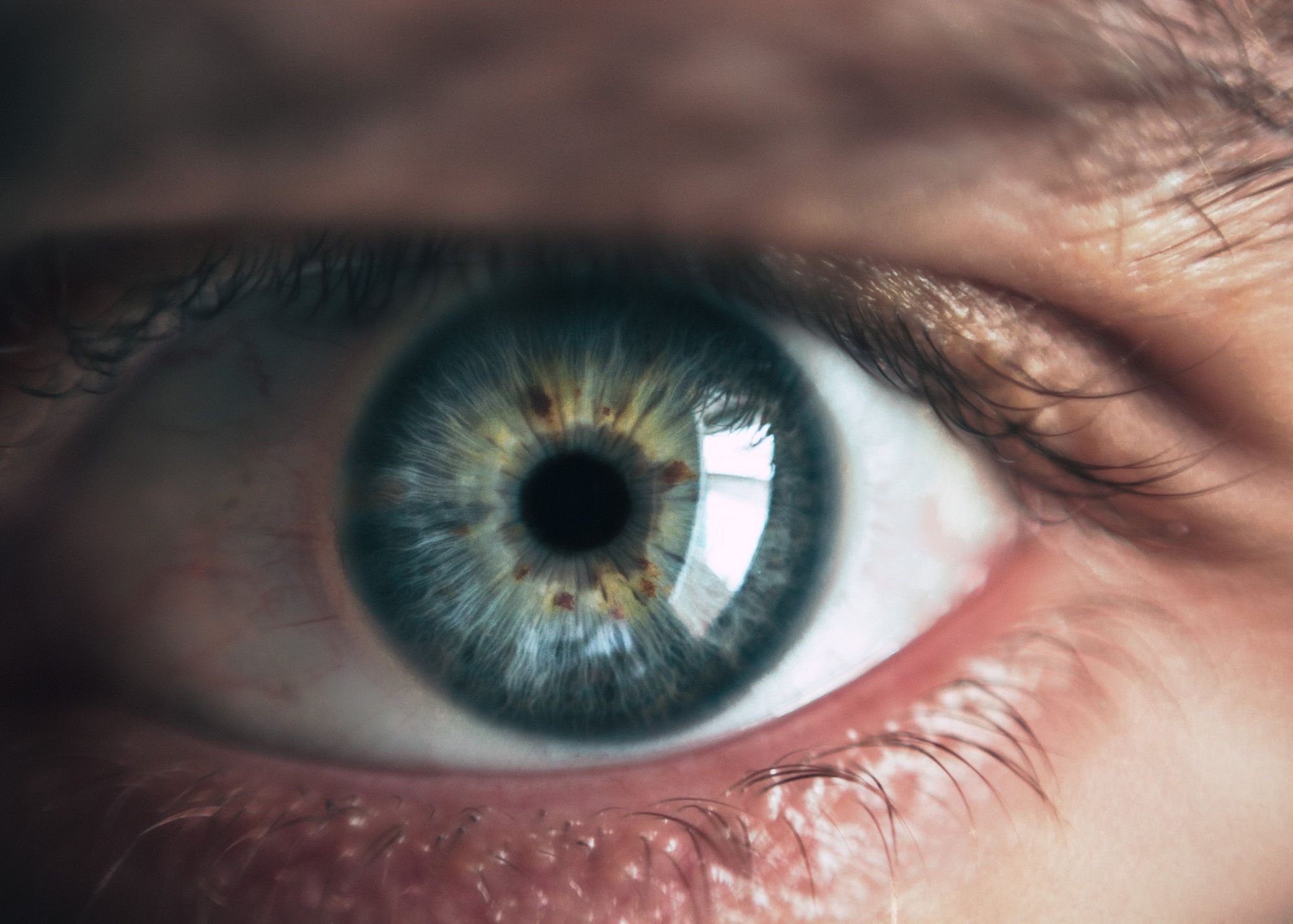 Have you heard of Sanpaku eyes? If you are living in Japan, you are well aware of this part of the body that is believed to determine your fate. In fact, this term originally came from Japanese superstition.

But before we get into sanpaku eyes, let me help you to become familiar with some of the parts of an eye called the iris and schlera. The colored portion of your eye is called the iris. On the other hand, the white layer that covers most of the outside of the eyeball is called the schlera.

Sanpaku, which translates as "three whites," simply refers to how an eye can be divided into four segments, with the whites constituting three of the four. When the schlera is visible above or below the iris, this is referred to as sanpaku.

So, when you look in the mirror at your own eyes, you can see the whites on either side of each iris. But if there's white above or below the iris, too, your eyes are considered sanpaku, which means they have three whites.

Normally, that's not a very interesting thing, and you might not even notice it, but in Japan, there is a belief that sanpaku can tell you a lot about your future. Many are interested in it because numerous people are curious about what the future holds. Below are illustrations of sanpaku eyes: 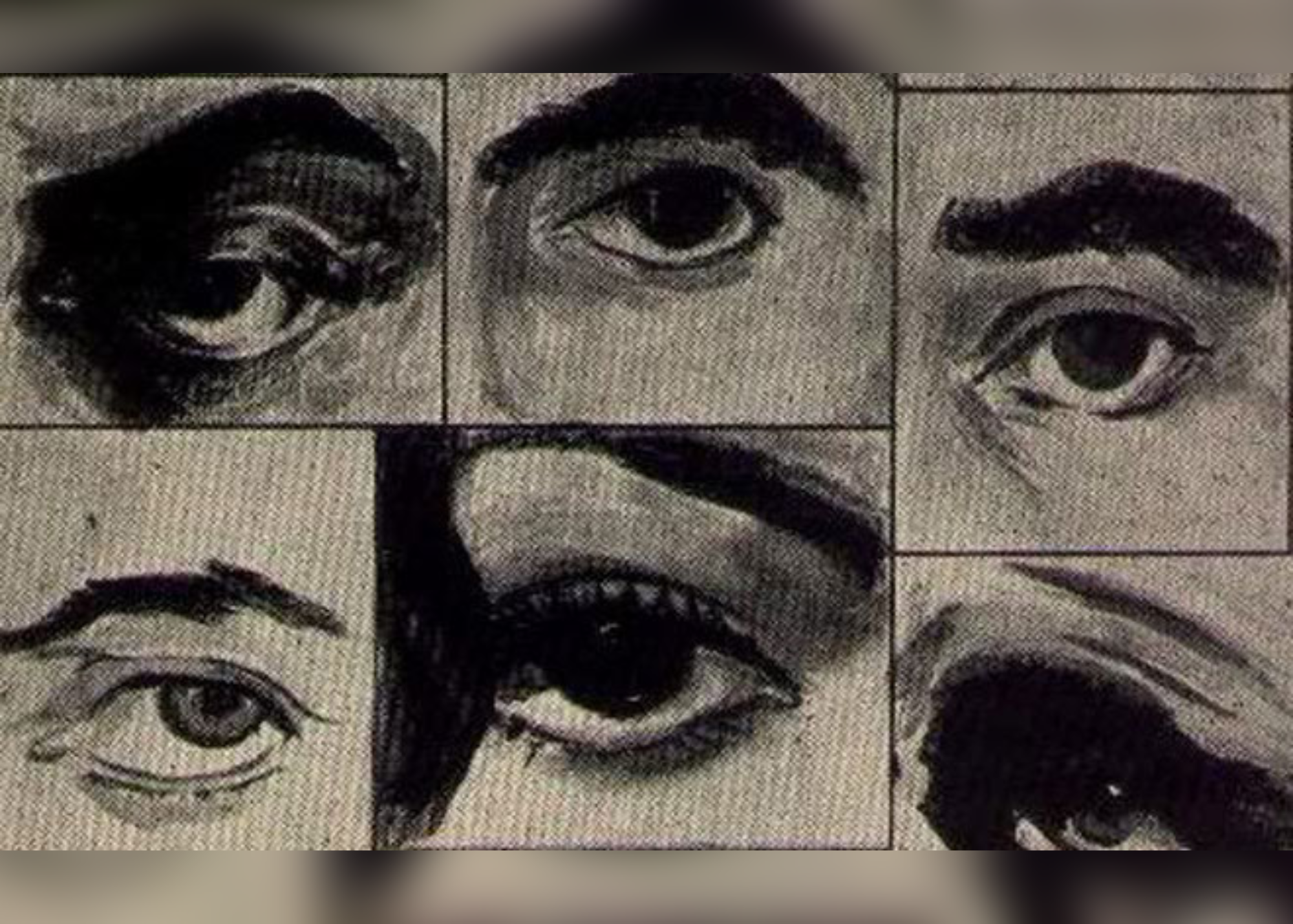 In the 1960s, when Japanese author George Ohsawa used the eyes of celebrities to predict their deaths, including Marilyn Monroe and John F. Kennedy, the belief in this superstition generated a lot of interest in the West. Since then, many have wondered if and how sanpaku influences one's destiny.

Ohsawa authored the book, "You Are All Sanpaku." He is one of the most well-known authors on the topic of sanpaku in Japanese culture and is also an alternative medicine practitioner.

There are two more types of Sanpaku:

This means the white part below the iris. Traditionally, yin sanpaku means that you may face some kind of threat or danger from the outside world or that you tend to put yourself in dangerous situations.

This means the white part of the eye above the iris. According to Japanese culture, it implies that the threat you face is greater from within. To put it another way, you're more likely to struggle with controlling unwanted emotions, which may have an adverse effect on both your behavior and general well-being.

It seems like Sanpaku is a popular topic in other cultures as well. Max Liang, a Feng Shui consultant, says that the idea of reading people's faces has been controversial for a long time.

Some believe it may foretell unpleasant things for the person who possesses it, such as death. We've done our homework, and we’ve determined that it’s a function of the person’s mental state. "It's not the best pair of eyes, but it’s not bad enough to be lethal."

Now, let's discuss Yin Sinpaku or the sclera (white part of the eye) below the iris. 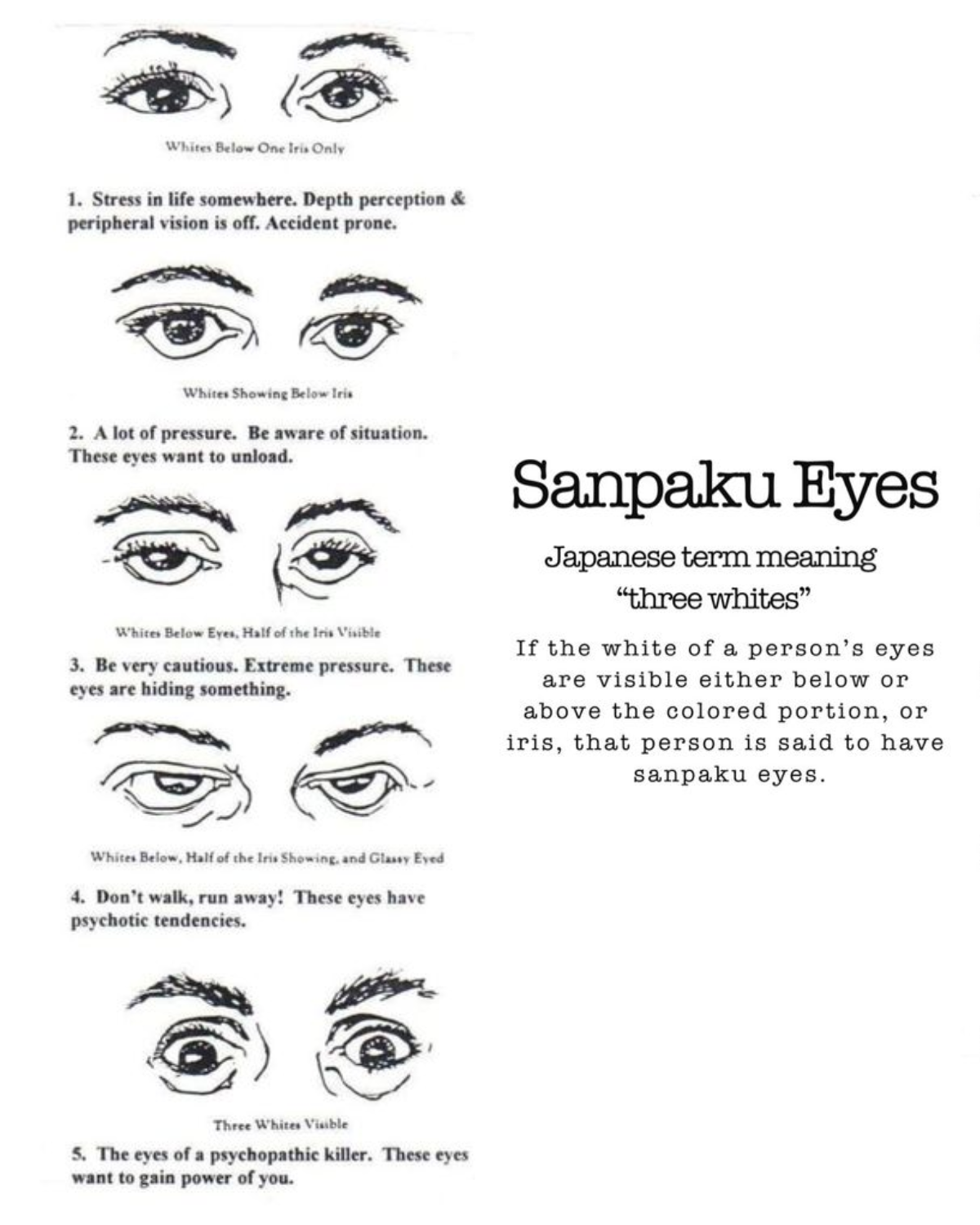 Different types of eyes according to japanese superstition on sanpaku eyes

You may see in the picture the Yin Sanpaku or the schlera below the iris. Aside from the possible traits of a Yin Sanpaku person, Yin sanpaku is also thought to be a sign of a physical imbalance in the body. It is thought to be present in drug addicts, alcoholics, and people who eat a lot of sugary foods and grains.

The symbol for Yin Sanpaku appears to be reptilian. It is used to give a demonic or satanic look by tilting your head downward and looking forward.

According to Chinese medical face reading, when the sclera, or bottom of the white part of the eye, is visible, a physical imbalance in the body is indicated. Moreover, people with yin sanpaku eyes are also said to often put themselves in dangerous or threatening situations.

Many well-known people, like Princess Diana and Billie Eilish, are known to have sanpaku eyes. The whites of Princess Diana's eyes were often visible in photos. Her life seems to have gone the way that was predicted for people with yin sanpaku eyes.

President John F. Kennedy, who had yin sanpaku eyes, was also predicted to die by Ohsawa in 1963. This much is clear: Kennedy was often in danger. Even before he was killed, he was a hero during World War II.

JFK also had Addison's disease, an endocrine disorder in which the adrenal glands don't work as well as they should. After his death, it was also found that he had hypothyroidism. People say that having sanpaku eyes like his makes you sick a lot.

Charles Manson is a well-known person with yang sanpaku eyes, which are those with white on top of the iris. The late leader of a murderous cult had wild eyes, and it was easy to see the whites of his eyes above his irises.

He was definitely a threat to other people because he was angry and violent. Even before he started the Manson family and sent his followers out to kill many people in 1967, he spent most of his life in prison for violent crimes.

The phrase "sanpaku eyes" is popular on TikTok right now, along with a crazy Japanese belief about this eye shape. One user went on TikTok to talk about how she thought a sanpaku eyes curse might work. She said that Marilyn Monroe, Princess Diana, and Michael Jackson all had yin Sanpaku eyes, and they all died young.

Some of Billie Eilish's supporters have expressed concern for their favorite performer after noticing that she has yin sanpaku eyes. Many TikTokers, however, are now posting about how much they appreciate their own sanpaku eyes, suggesting that this far-fetched theory is not supported by evidence. Sadly, those who are born with sanpaku eyes believe that they are doomed and will eventually meet a tragic end.

Besides Marilyn Monroe, Martin Luther King, Robert Kennedy, Lady Di, Michael Jackson, and Amy Winehouse, there have been many notable people in history who also had Sanpaku eyes. All of them died an unfortunate death, or at least went through a lot of rough patches in their lives.

How To Get Rid Of Sanpaku Eyes

A user of Lipstickalley seek help on how can she get rid of sanpaku eyes. Online discussion group known as Lipstickalley was founded by urban African Americans to share gossip about celebrities, political rants, and conspiracy theories. She posted:

"I am suffering from sanpaku eyes. They have not always been like this, it’s starting to become worse too. Does anyone know a cure?"

Several users answered this question by saying that there is no way to get rid of get rid of sanpaku eyes because it is a genetic trait.

"I don’t think there’s a cure for that. Wouldn’t that be a genetic trait," the user said.

"It’s just a trait babe, there’s nothing to cure. Cure means there’s something to fix? There are also no health implications for this feature."

But some of its users have some suggestions, which you can read below:

"It can be cured by drinking water and eating better. It's basically a sign of being dehydrated and in ill health, which in turn causes misfortune," said Amanirenas.

What Does Having Sanpaku Eyes Mean?

The Japanese term sanpaku, meaning "three whites," refers to a specific aspect of reading people's faces. The whites (sclera) of your eyes are visible alongside the colored parts (irises) when you look at yourself in the mirror. However, if you notice white outside of the iris as well, you have sanpaku eyes.

The term "sanpaku" refers to the condition in which the white of someone's eye is visible above or below the iris. But some Japanese superstitions say that sanpaku is a good way to see what will happen in the future.

How Do I Know If I Have Sanpaku Eyes?

As mentioned in this article, when you translate the word "Sanpaku," it means "three whites." The white part of our eyes, called the scelra, is usually only visible on the sides of the colored part, or iris. If you have sanpaku eyes, it means that you can see the white part of your eyes on the sides and under or above the iris.

At this point, you can take a look in the mirror to see if you have sanpaku eyes. Don't be afraid if you have this one. Remember, fate doesn't decide what will happen to you. What you choose to do, how you feel, and what you say all have real effects on your future.