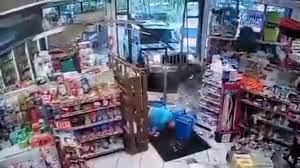 After a scary crash at a Florida convenience store, the victim is in excellent spirits.

MCSO - Man Injured after driver hits accelerator instead of brakes

The Martin County Sheriff's Office released video of the crash, which they believe occurred when a 21-year-old motorist pressed the accelerator instead of the brake and slammed into the front of the Plantation Pantry shop.

The motorist stated that she intended to brake but was unable to do so. The man was taken to the hospital with shattered glass injuries to his face. He should make a full recovery.

While first responders attended to the wounded, he continued to speak and appeared strangely cheerful, asking deputies if the beer he had just purchased was safe.

The driver is almost certain to face reckless driving charges. 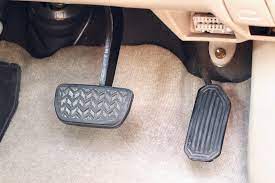 A brake and a gas pedal of a car

Each year, about 16,000 avoidable collisions occur as a result of pedal error—when a driver confuses the gas pedal for the brake pedal, resulting in abrupt vehicle acceleration. Pedal error collisions can result in injuries to the vehicle's occupants, other motorists, pedestrians, and property. The National Highway Traffic Safety Administration released a safety recommendation earlier this summer on minimizing collisions caused by pedal mistakes. The agency analyzed crash reports in North Carolina, the only state that tracks pedal misapplication.

Pedal errors are frequently encountered while vehicles are driving slowly, such as while parking. According to National Highway Traffic Safety Administration research, drivers under the age of 20 and those over the age of 65 have pedal mistake crashes around four times as frequently as other age groups.

Sudden acceleration has been associated with pedal mistakes, in which the driver feels he or she pushed the brake rather than the gas pedal.

According to the auto safety agency, contributing issues include the wide variance in pedal location between vehicle manufacturers and the absence of a universally acknowledged standard for pedal placement regulation.

Apart from the pedal placement, the agency discovered a disproportionate number of events involving specific kinds of cars—certain model years of Honda Accords were associated with a disproportionate number of total incidents. Additionally, the driver's age, gender, and height are taken into account, as is the activity in which the driver was engaged at the time of the event. Additionally, the seat position was mentioned as a factor.

Additionally, the model suggested that when pedal spacing was high, a narrower seat width was related to a lower probability of pedal misapplication, "the report's authors wrote.

Local news organizations often cover stories about vehicles ramming into shops. According to a 2013 study conducted by Texas A & M University, wayward automobiles collide with hundreds of structures each year. The Storefront Safety Council, which collects statistics on vehicle-into-building collisions, estimates that roughly 50 vehicle-into-building collisions occur daily in commercial buildings.

According to the council, states with the highest proportion of licensed drivers over the age of 65 also had the highest rate of storefront collisions.

According to the council, two factors have a significant impact on the frequency of vehicle-into-building crashes: driver demographics and parking lot configuration.

"Drivers of all ages make pedal errors: their feet slip from one pedal to the next, or they hit the throttle instead of the brake." However, the National Highway Traffic Safety Administration reports that pedal error is more prevalent in drivers aged 16 to 20 and those aged 76 and older. According to the Storefront Safety Council's website, "Texas A & M figures indicate that up to 40% of storefront collisions are the result of pedal error." "Despite the fact that California has over 400,000 more licensed drivers than Florida, Florida drivers smash into commercial buildings, businesses, and non-residential structures at a rate that is 70% higher than California drivers! "Our current estimate is that Florida is responsible for up to 17% of all such incidents nationwide, despite having only 10% of licensed drivers," the council's website added.

According to the council's research, 25% of crashes occurred in retail establishments, 22% in other venues, 21% in convenience stores like the scary crash at a Florida convenience store, and 19% in restaurants.

According to the National Highway Traffic Safety Administration, protective barriers and education are two strategies for reducing these types of errors.

Several states and towns have enacted additional regulations to address the dangers of pedal error-related injuries and property damage. In 2015, new rules were implemented in Artesia, California, and Massachusetts, to name a few.