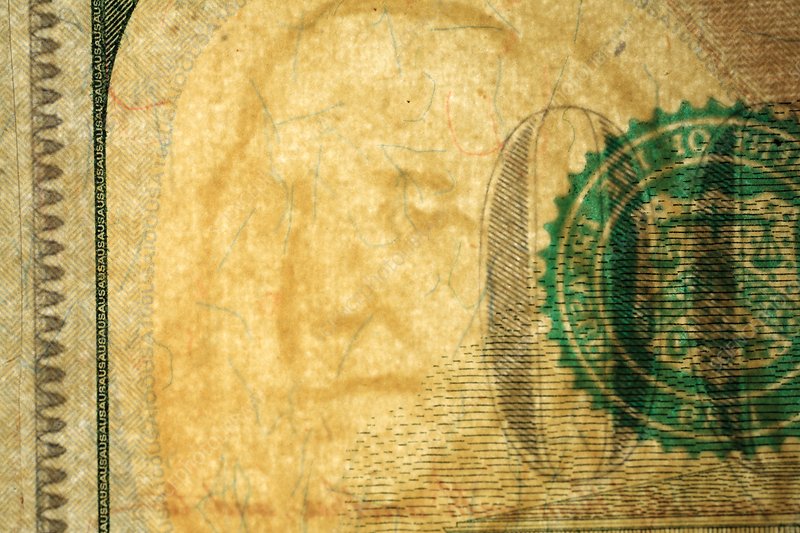 So much so that as many as 88 million counterfeit United States dollar bills were recovered in only one year, in 2013! You should check out these Security Features In $100 Currency Note.

In recent years, the United States Mint has made significant efforts to incorporate security elements into the nation's circulating currency in order to assist decrease the scope of the problem. 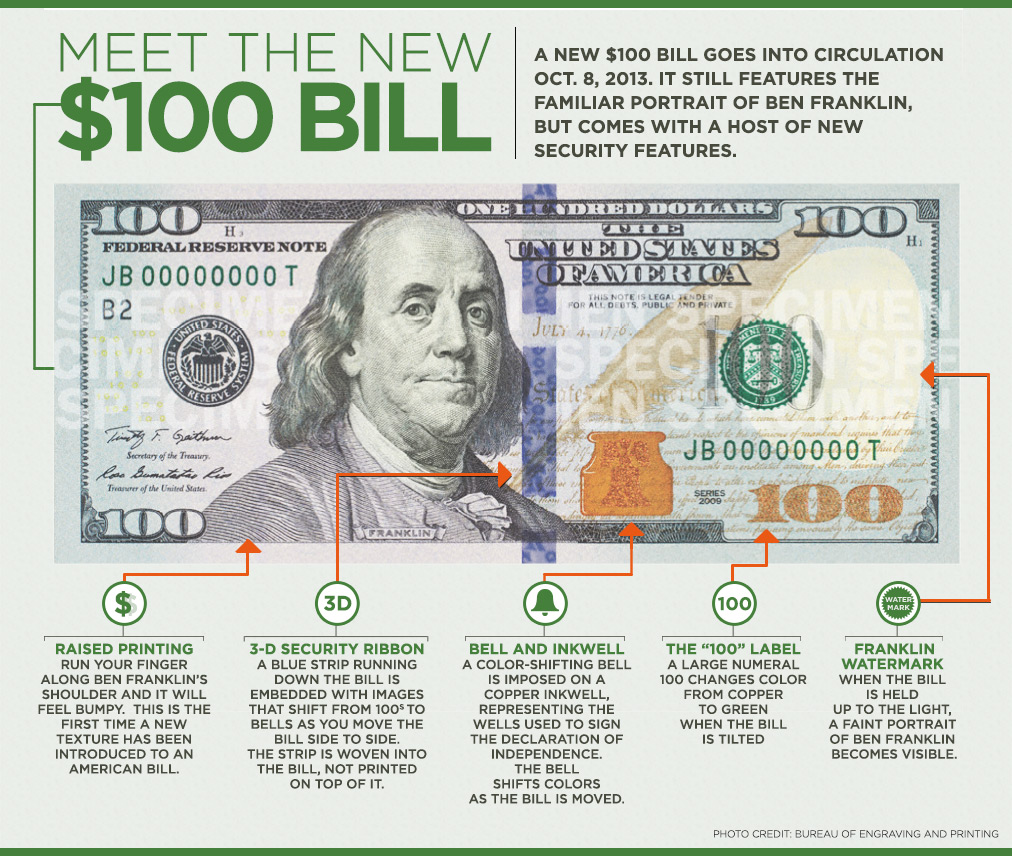 What if I told you something you already knew?

Because of this, the possibility of receiving a counterfeit bill in your possession is still very much a possibility.

Through the use of current microprocessor-driven bill counters and extremely complex software, the level of protection provided to the local businessman is significantly raised.

Below, we've included a summary of the anti-fraud advances embedded into today's United States dollar bills, which will allow you to check for probable counterfeit currency while traveling abroad.

The finished result, on the other hand, was the most complicated note ever written.

It boasts the most advanced security measures of any US dollar bill that has ever been produced!

But people being people, has a realyy quirky way to express their feeling about this security addition:

"For a while after these hit the street, Las Vegas machines were only reading the security strip. You could remove them and glue it to a one dollar bill, stick it in a slot machine, play a few hands and cash out. Or so I was told by a casino security person."

"And the vending machine lobbyists are the reason we've had the same $1 design for nearly 90 years..."

Here's how you can double-check Security Features In $100 Currency Note, too:

There are seven security features, and each of them has an impact on seven bills.

The following are examples of new security features:

The dimensions of all seven US bills are 2.61 inches wide by 6.14 inches long by 0.0042 inches thick, with each bill weighing exactly one gram. They are all made of paper.

The 3D ribbon is a work of enchantment.

It is composed of hundreds of thousands of "micro-lenses," which are tiny lenses.

For example, you could shuffle the bill while keeping your attention on the broken blue stripe in the middle. You should notice that the "bells" written on the ribbon have changed to "100"s and that they, as well as the 100s, should move in an unexpected fashion as a result.

Because the note is being rotated around the vertical blue ribbon, the bells and the numbers in the 100s move up and down with it. You may see them moving from side to side when you tip the bill around its (horizontal) wider edge.

The trick is that the bells and "100"s should travel in the opposite direction from the direction in which the bill is being rotated to achieve the desired effect.

It is also important to ensure that the ribbon is woven through the paper from front to back, rather than being printed only on the top. 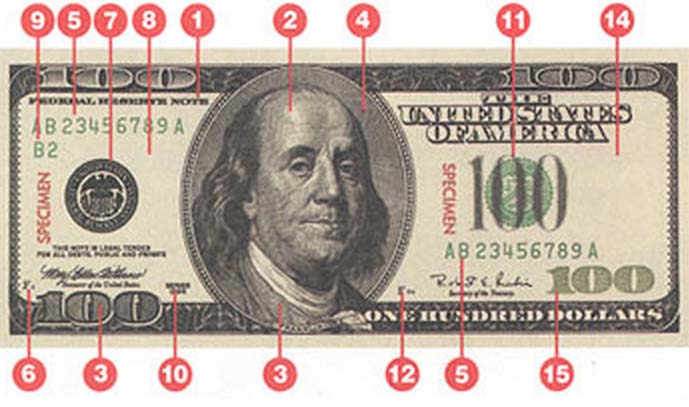 Tip the note and examine the "Inkwell" and the huge numeral "100" in the lower right corner of the front of the note - they should change color from copper to green as the note is tipped back and forth.

Watermark For A Portrait

By shining a light on it, you should be able to see an additional (faint outline) image of Benjamin Franklin in a blank space between the upper (small) and bottom large "100" on the right-hand side of the bill, which is somewhat obscured by the Treasury seal.

From both sides of the note, it should be easily seen.

The little letters "USA" and the number "100" are engraved on the thread in alternating fashion.

Both sides of the letter should be able to see the thread through it.

Ultraviolet (UV) light illuminates this thread, making it glow pink. This is how the less expensive bill counters check for forgeries - they only employ UV light to do so.

Printing On A Raised Surface

Swipe your finger up and down the right shoulder of Ben Franklin (left side of the bill).

As a result of the recessed intaglio printing, it should have a gritty feel to it.

Raised printing from an earlier generation of technology can be felt throughout the remainder of the $100 bill; this provides all genuine notes a distinct texture that can be compared to the feel of a bill that you know is genuine.

The micro-printed word "THE UNITED STATES OF AMERICA" is visible on the collar of Ben Franklin's jacket, just below his neck-scarf, if you look closely (a magnifying glass may be necessary).

Once this is done, it is customary to have "USA 100" surrounding the vacant space containing Ben Franklin's watermark, "ONE HUNDRED USA" along with the Founding Father's golden quill, and miniature "100"s in the note borders.

The situation is quite difficult to understand.

Please see the US Federal Reserve website for a more detailed explanation of these features.

It also includes some quite valuable illustrations of how to twist and turn the bills in order to make the security features visible.

Checking out the webpage is strongly recommended - you might just avoid being caught with a dud!

In order to detect counterfeit printing flaws, bill counters and bill sorters must be extremely complex, yet they must be able to detect these defects in a matter of milliseconds to be effective.

In addition to the hundred, there are two other denominations worth noting. The fifty-dollar bill, for example, was last revised in 2004 and has not been altered since.

The absence of a 3D Security Ribbon is the most significant difference between the security measures of the $50 bill and the $20 note.

Designed recently in 2003, the $20 banknote incorporates the same anti-counterfeiting measures as the $50 bill.

How Do You Authenticate $100 Bills?

It's possible to see micro-printing everywhere around the portrait, as well as on the security threads. The bills will be illuminated in the following colors: blue for the $5 bill, orange for the $10 bill, green for the $20 bill, yellow for the $50 bill, and pink for the $100 dollar. Check for a 100 dollar bill watermark on the bill by holding it up to a light.

As the Security Features In $100 Currency Note is added. There are some changes that are added to other currency bills.