Simon Pegg would love to reprise his role of Nicholas ‘Angle’ and yes, that is his name.

I was doing that joke from that film. You know, Hot Fuzz? Where the journalist spells Angel’s name wrong? It was a very clever joke actually.

Anyway, Simon Pegg wants to play his Hot Fuzz character once more, despite that being fairly unlikely in the grand scheme of things.

Out of the three Cornetto films, Hot Fuzz stands head and shoulders above the rest – in my opinion – and it also seems to be the one that would warrant a sequel the most.

The issue is, they serve as a standalone trilogy of separate films and are very much intended to be seen as three thematically connected features. 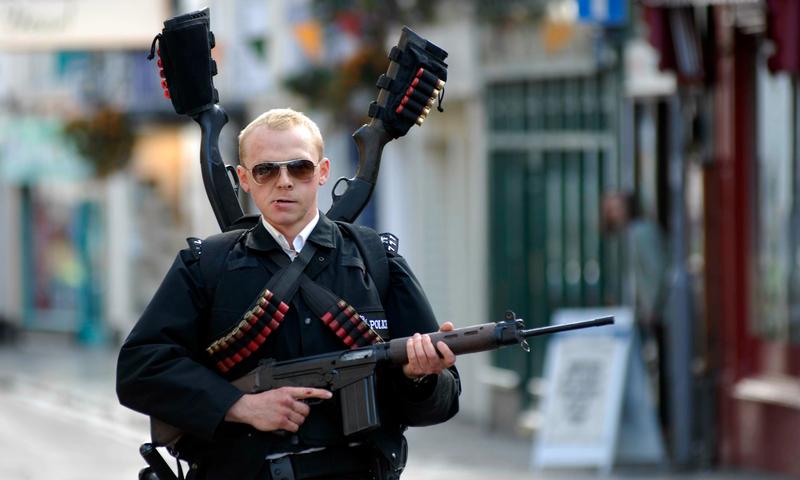 Despite that, in an interview with MovieWeb, Pegg said:

“I think it’s the one film out of those three movies that lends itself to a sequel, in that, those kind of buddy-cop action movies often were sequelised.

“The hypothetical sequel would be Danny and Angel in the big city together“.

He then went on to explain that due to writer and director, Edgar Wright’s, distaste for sequels (other than the future Baby Driver 2) it pretty much won’t happen…

“I don’t know. Edgar and I, when we’ve done something we want to move on to the next thing“.

The last thing he added though was a little tease, saying:

Hot Fuzz was brilliant and probably one of the best comedy films ever, but I think its charm was in its setting to a large degree.

The cast of villains being a group of middle-aged and elderly people working in the interest of the neighbourhood watch so they can win village of the year was genuinely genius and I think if you drop Danny and Nicholas in London, you lose some of that.

Obviously I’d watch it and probably enjoy it a lot, but that doesn’t mean I’m not allowed to have reservations.

It won’t happen anyway, and if it does, I sincerely hope it isn’t in a Comic Relief short. They are always dreadful.