Sir Nicholas Winton - The Man Who Saved 669 Children From Holocaust 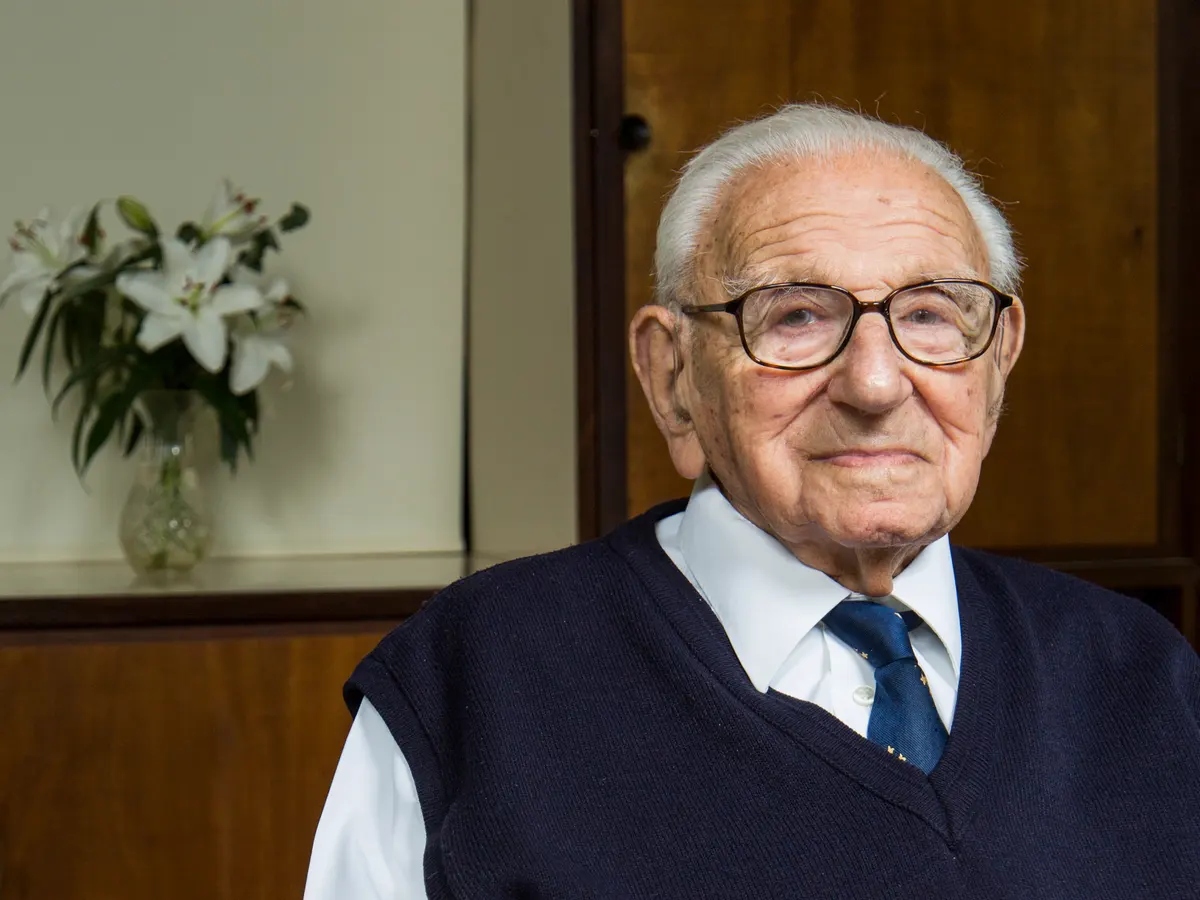 During the nine months before war broke out in 1939, he was credited with organizing the escape of 669 Czech children from Nazi-occupied Czechoslovakia (Holocaust).

When the story appeared on Esther Rantzen's BBC television program That's Life! in 1988, the general public first learned about it.

He received a knighthood in 2003 from Queen Elizabeth II in recognition of his services to humanity.

Why are you making such a big deal out of it? I just helped a little; I was in the right place at the right time.

Despite Sir Nicholas's modest and uplifting comment, his life story will demonstrate that it takes more than merely being in the right place at the right time to succeed.

Sir Nicholas Winton was born in 1909 in Hampstead to Jewish parents but was baptized as a Christian.

Winton, then 29 years old, postponed a scheduled skiing trip in December 1938 when a friend, Martin Blake, pushed him to visit Prague to view the grim situation for himself.

After Germany took over the Sudetenland, a predominantly German-speaking region of Czechoslovakia, the area became overrun with migrants.

Blake and Warriner were both collaborating with a group to assist with relocating the adults when Winton immediately realized that something needed to be done to save the kids who were involved. He was simply unable to watch.

The Nazis started a campaign of hatred against the Jewish population in all of their areas on Kristallnacht (9 and 10 November 1938).

During the war, 267 synagogues were burned, 30,000 people were detained, and 91 Jews are thought to have been slain.

In response, the British government liberalized its immigration policies and decided to permit a certain number of children from Germany and Austria to enter the country.

The Kindertransport program, which successfully transported 10,000 kids to Britain, was known by this name.

In response to Winton's request, the British government agreed to let some Czech children enter the country as well, but only under the conditions that each child be matched with a host family who would look after them until they turned 18 and that each child have a guarantee of £50 from their family.

Together with a small group of volunteers, including his mother, Winton worked tirelessly to make sure the kids had all they needed, including locating host families and gathering money to pay for the kids' travel costs.

Over the following few months, Winton was able to arrange for 669 children, most of whom were Jewish, to arrive in the UK.

On September 1, 1939, the last train carrying children was supposed to depart.

Because of the start of the war, it was canceled, and Winton had the terrible impression that "none of the 250 youngsters on board" had ever been heard from again.

The majority of the youngsters learned that their parents had been killed in the Holocaust, despite the fact that many of them had hoped to be reunited with their relatives and parents after the war.

The activities of Winton and his colleagues, particularly Trevor Chadwick and Doreen Warriner, who made lists of the kids and rode the trains with them, saved the kids from suffering the same fate.

Before enlisting in the RAF, Nicholas Winton worked as an ambulance driver throughout the conflict.

Winton joined the International Bank in Paris following the war, where he first met Grete, his future wife.

Years later, Winton was attempting to donate his documents to an archive or museum by identifying the kids and connecting them with their families.

Shortly later, Winton received an invitation to appear on the television program That's Life!, when, to his astonishment, he ran into Vera Schaufeld and other kids he had assisted.

For the majority of the kids, it was the first time they learned who had saved them, and they thought it was an absolute honor and privilege to meet their savior in person.

Following this, Winton received a number of honors, including a knighthood, the Freedom of the Cities of Prague and London, and the Order of the White Lion, the highest honor bestowed by the Czech Republic.

Many people throughout the world found inspiration in Sir Nicholas Winton.

He asserted modestly that anyone would have acted similarly. However, they didn't. Most individuals just watched.

There are two statues of Sir Nicholas Winton:

An interesting tale about Nicholas Winton, who at the outbreak of World War II saved 669 children. He later founded various organizations in England and received numerous honors.

There is another book about him, "Nicholas Winton and the Rescued Generation: Save One Life, Save the World," by Muriel Emanuel and Vera Gissing.

This book chronicles the life and times of an outstanding but little-known pre-war hero who saved 667 children from the Nazi takeover of Czechoslovakia (Holocaust).

There are four movies about Sir Nicholas Winton.

Reddit user PlayerSalt shared some interesting information about him, "His humanitarian accomplishments went unnoticed by the world for nearly 50 years until 1988, when he was invited to the BBC television programme That's Life!, where he was reunited with dozens of the children he had helped come to Britain and was introduced to many of their children and grandchildren.

In 2003, Winton was knighted by Queen Elizabeth II for "services to humanity, in saving Jewish Children from Nazi-occupied Czechoslovakia".

On 28 October 2014, he was awarded the highest honour of the Czech Republic, the Order of the White Lion (1st class),

According to his son-in-law Stephen Watson, Winton died peacefully in his sleep at Wexham Hospital, Slough, in 2015, at the age of 106

Im glad he got recognition and his knighthood while he was still alive must have made him increadibly happy/proud."

Reddit user redpola shared a sweet gesture of govt. towards Sir Nicholas , "When he was too frail to travel to Prague to be awarded the Czech Lion the Czech army sent a military plane just for him to England to get him and return him."

How Did Sir Nicholas Winton Rescue The Children?

Additionally, he had to track down British households that would take in the refugee youngsters. Winton spent the day at his regular job on the Stock Exchange, and the late afternoons and evenings were devoted to his rescue operations. He worked very hard to find foster homes and generate money so that he could save as many children as he could.

Was Nicholas Winton A Hero?

Yes, he was definitely a hero. Winton was honored by the British government in 2010 as a British Holocaust Hero. In 1998, Winton received the Fourth Class Order of Tomá Garrigue Masaryk from Czech President Václav Havel. He received many honors from the Czech government in 2008.

What Religion Was Nicholas Winton?

Despite the fact that his parents were of German and Jewish descent, he was baptized into the church as a Christian rather quickly.

No one had any idea of this great act of Sir Nicholas Winton until his wife discovered a dusty scrapbook of names, images, and documents detailing a story of redemption from the Holocaust in their attic in 1988.