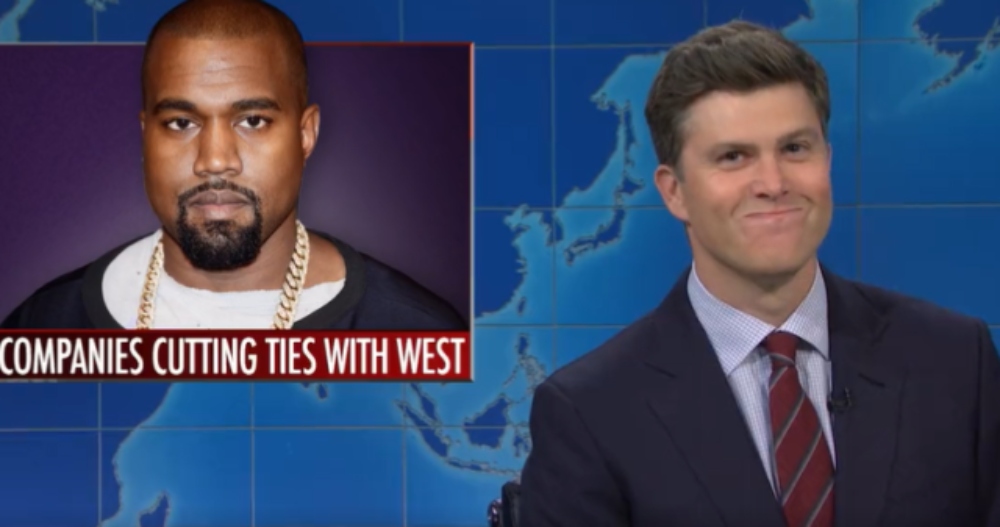 SNL mocks Skechers and TJ Maxx for fake-dumping Kanye West. When did this happen? This happened in October 2022.

Has anyone else noticed that the majority of the brands that dumped Kanye sound fake? I saw the headline, ‘TJ Maxx cuts ties with Kanye.' I was like, 'Did Kanye know he works for TJ Maxx?' Also, unless we already associate you with Kanye, you didn’t have to announce that you were cutting ties. We didn’t need Peloton to announce, ‘We’re no longer playing Kanye’s music.’ Thanks, Peloton, now we can rest easy knowing we won’t hear ‘Gold Digger’ while we have a heart attack on your bike.

Dippin’ Dots will no longer work with … Scrub Daddy is cutting all ties … TCBY will discontinue their ‘Watch the Cone' menu. But the oddest company was Goodwill cutting ties, which is somehow real. They will no longer accept donations of Kanye's clothing. That's ironic since Kanye has lost enough money that he might need them.

The corporate response from Skechers to the West controversy was the focus of another "SNL" skit. SNL mocks Skechers and TJ Maxx for fake-dumping Kanye West.

Ye (aka Colin Jost) "arrived unannounced and without invitation," according to a statement released by the shoe manufacturer. Ye was then led out of the building by two Skechers executives.

The Skechers representative, who was portrayed by Cecily Strong, remarked in the fictitious "SNL" promo, "Here at Skechers, we pride ourselves on two things: making stylish, comfortable shoes at an affordable price and having zero tolerance for antisemitism."

West's "horrific comments," according to Strong's management, have shocked the company. "And we vowed not to work with him in any capacity."

"But can we also point out, that of all companies he could’ve approached and get rejected by, he chose Skechers," she then added.

"It took Adidas so many days to decide not to work with him. He walked in and we were, like, 'Bye-bye, door,'" Strong’s character added, name-checking the #SkechersHeroes hashtag. "I'm proud to work for Skechers, when is the last time I said that?"

A Skechers representative played by Bowen Yang said, "We would never partner with him. ... Thanks but no thanks, Kanye."

"But I’m sure Kanye will find a morally dubious company to work with instead," he added. At the end of the fake ad, Mike Lindell (James Austin Johnson) said that MyPillow would be working with West "effective immediately."

During "Weekend Update," host Colin Jost took aim at the strange businesses that have cut ties with the rapper, now known as Ye, because of his recent antisemitic rants. SNL mocks Skechers and TJ Maxx for fake-dumping Kanye West.